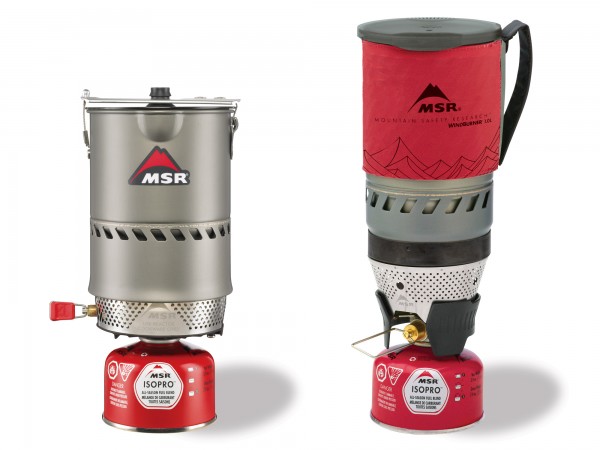 How does the WindBurner Personal Stove System stack up against the hard-charging Reactor?

By now, you may have heard that our WindBurner Personal Stove System is built around some of the same award-winning technology that’s found in our Reactor Stove System—such as a unique radiant burner, a pressure regulator and a windproof design.

But is the WindBurner simply the Reactor’s little brother? How does its performance really stack up against the Reactor’s? And which of these stove systems is best for which trips?

The WindBurner and Reactor stove systems are similar in some important ways, but they’re also different in ways that are equally crucial. So, let’s boil it down.

How are the WindBurner and the Reactor Stove Systems similar?

First, let’s look at how they operate. The WindBurner and the Reactor stove systems are both built around an ultra-efficient radiant burner. In addition, they both are internally pressure regulated to ensure consistent output (and thus fast boil times) across a range of temperatures and conditions.

They both are also engineered to operate on 100% primary air. This allows for a windproof pot that encloses the burner to protect it from wind and maximize its heat output. Because of this, the WindBurner and the Reactor are incredibly fast, fuel-efficient and virtually windproof.

Then there’s the top-shelf materials and construction that go into them, which provide superior durability and reliability in the field. Therefore, both the WindBurner and the Reactor are designed, engineered and built to the absolute highest quality.

So, yes, the WindBurner borrows a good deal of technology from the world-renowned Reactor, which has proven itself time and again in some of the harshest places on the planet.

And, both systems are assembled and tested at MSR’s own factory in Seattle, Wa.

How are they different?

The Reactor isn’t for everyone. It was never intended to be. The Reactor was originally engineered to be an alpinist’s tool. An unapologetic snow-melting powerhouse.  A purpose-built rocket ship of a stove system. One that delivers amid the most demanding alpine conditions. Because the longer it takes a mountaineer to melt snow for hydration, the greater his or her risk for altitude sickness.

In contrast, the WindBurner Personal stove system truly is a personal unit, with features designed to bring ultimate convenience to solo travelers and minimalist backpacking pairs.

Like the Reactor, the WindBurner Personal is an all-in-one system, but it’s even more compact, and its features are tailored to meet the needs of one or two travelers heading into the backcountry, or simply camping in the frontcountry—and anyone who’s trying to cook a hot meal in places where real weather can happen.

The WindBurner stove scales down from the Reactor in both heat output and form factor. Where the Reactor blasts out 9,000 BTU/hr, the WindBurner throttles back to 7,000 and makes up the efficiency by sipping fuel more slowly. 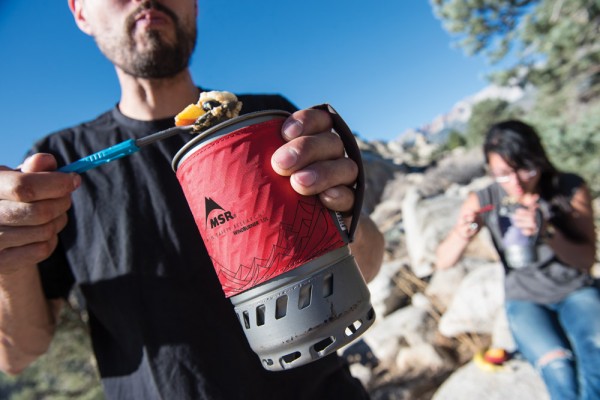 When it comes to form factor, the Reactor includes cookware with a traditional side-mount pot handle; it’s a very utilitarian design. In contrast, the WindBurner Personal offers a high-tech, integrated cook-and-eat solution—its pot features an insulated cozy, and a drinking and straining lid allowing it to double as a mug and eating vessel. The WindBurner Personal pot also locks onto its stove burner for improved stability, and it features a heat-resistant grip on the burner that makes it easy to hold while you’re removing the pot.

The WindBurner Personal is meant to be the ideal stove for minimalist backpackers and anyone who wants to cook up a personal meal fast. You could say the WindBurner is a hot cup of morning coffee in camp, while the Reactor is a snowmelting-electrolyte-refueling-station on an exposed Alaskan ledge. In other words, the WindBurner is truly personal.

Finally, the WindBurner product line now offers more pot styles and system sizes than the Reactor family. Because the WindBurner was designed for all kinds of backcountry camping and cooking (not just mountaineering like the Reactor), we’ve developed a WindBurner skillet, a 1.8L Duo Pot,  2.5L sauce pot and a large 4.5L Stock Pot to satisfy almost any cooking need. Now, the WindBurner isn’t just personal, it’s great for groups and family cooking too! And you still get the windproof, ultra-efficient design. For those larger pots, you will need the WindBurner’s new remote-canister stove, which debuted this year. (Learn all about these new offerings here.)

If you’re looking for a the ideal alpinist stove for melting snow and boiling water fast on everything from alpine climbs to spring ski traverses, the Reactor is your ally.

If you’re looking for something with more of a personal touch, something that can double as a mug for eating and drinking as well, the WindBurner Personal is your ticket. Plus, if you’re going to be cooking a variety of meals in the backcountry, the WindBurner line of products offers more options for pot sizes and styles (with the remote-canister stove that comes in the new systems).

So there you have it.

We’re extremely proud of these two stove systems. They share more than technological DNA—they also share MSR’s deep commitment to quality and innovation. And each has its place MSR’s legacy and line-up of the world’s best stoves. 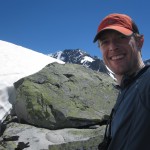 Steve is the tallest man** to summit Mt. Rainier in the history of mountaineering. He’s been playing in the outdoors since he could crawl, and especially enjoys extended wilderness adventures. Some of his favorite trips have been sailing across the Pacific and back with his dad, big wall climbing in Yosemite and Zion in a homemade (read: dodgy) port-a-ledge, mountaineering in California, Washington, Alaska and New Zealand, hiking the John Muir Trail, and most recently becoming the tallest man** to summit Tiger Mtn. (elev. 3,005’/916 m) with his wife and 8-month-old son. He has been developing outdoor equipment on his own and professionally for the last 16 years. He’s been at MSR for six years, most recently in the role of category director for Cook and Shelter.

**This is an unsubstantiated claim.