Whether you’ve set your sights on Mt. Rainier, Denali or the Himalaya, high altitude climbs require extra preparation of your body and mind. At higher elevations, the air is thinner and the environment, more extreme. These upper realms present intense challenges both physically and mentally, but they also offer experiences of a lifetime. As mountaineering season approaches, we checked in with Everest guide Harry Hamlin for his advice on how to operate at altitude. Here, he shares how to prepare for high altitude, and tips to prevent sickness when adventuring in the upper reaches of the earth. 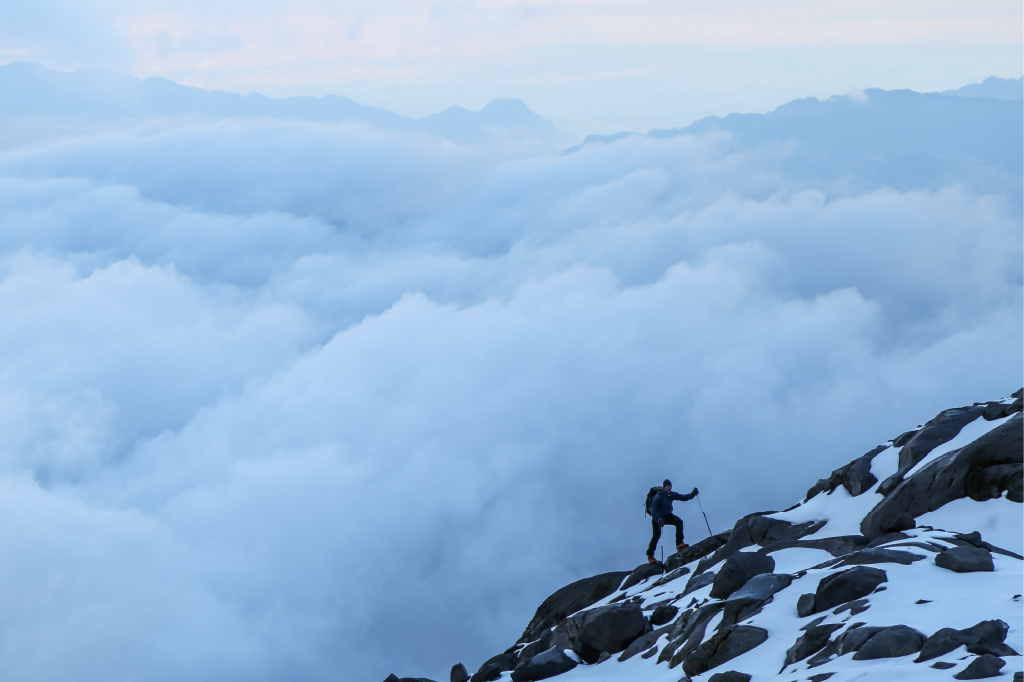 First, it’s important to know where “high altitude” starts. While the effects of high altitude can be felt as low 5,000 feet, most adventurers don’t begin to exhibit effects of altitude until 10,000 feet. You might feel your body working harder with each step or the onset of a slight headache. These are important to monitor, but they’re not of concern in mild instances.

It’s at 15,000 feet, says Harry, that more pronounced symptoms begin to show in his clients.

“As you ascend, your body needs time to adjust to less oxygen and the atmosphere’s lower barometric pressure,” he says. If you climb too fast, you invite the risk of altitude sickness. 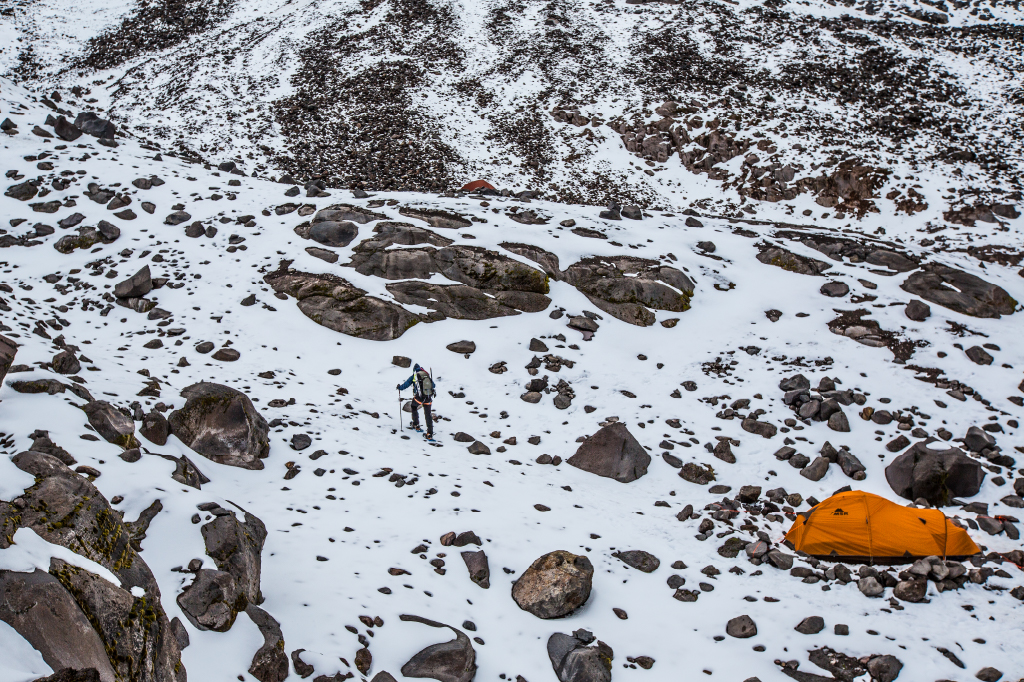 Three types of sicknesses can strike climbers (of all fitness levels) who ascend too high too fast. These include:

AMS (Acute Mountain Sickness): The mildest and most common. Symptoms include headache, mild nausea, difficulty sleeping and shortness of breath. “One of the causes is the fact that your body’s typical method for regulating pH is altered,” Harry says. “Don’t ignore those signs. Stay at that altitude or descend; do not go up higher.” Take prescribed Diamox (acetazolamide) and Ibuprofen to ease symptoms. (Note: people with sulfa allergies will have an allergic reaction to Diamox, so discuss with your doctor before taking.)

HACE (High Altitude Cerebral Edema): The most severe form of AMS. Occurs when the brain swells with fluid. “That’s when people get what we call the umbles,” says Harry. “The stumbles, bumbles and mumbles—the person looks and acts drunk.” HACE is life-threatening, but taking dexamethasone and descending immediately typically offers significant beneficial effects.

HAPE (High Altitude Pulmonary Edema): Also life-threatening. Can occur in the absence of AMS or HACE. HAPE causes a build-up of fluid in the lungs. “Like HACE, you must descend immediately and get medical attention,” says Harry. Symptoms include coughing blood-tinged sputum, shortness of breath, and crackling lung sounds, effects similar to pneumonia. Unlike AMS and HACE, this affliction does not correct as readily through descent, so take extra care to avoid it. The drug nifedipine should be administered immediately and rapid descent and/or evacuation to a medical facility is a priority. 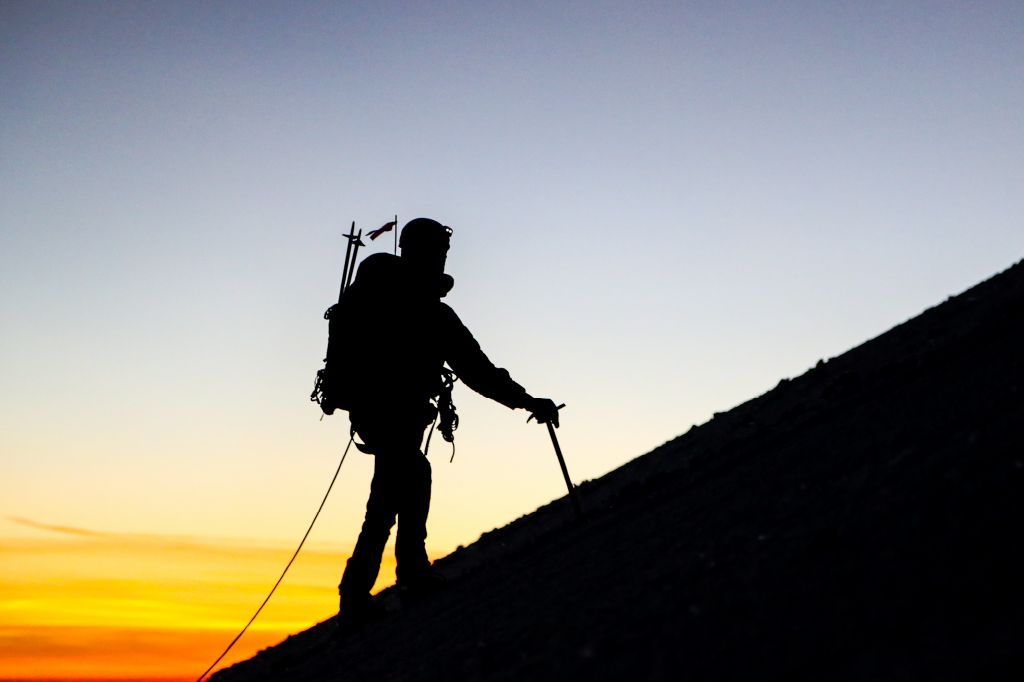 There’s no substitute for slow acclimatization

When it comes to avoiding altitude sickness, there’s just no substitute for slow acclimatization, Harry says.

“Slow acclimatization gives your body a chance to change in a lot of ways as it tries to make you more efficient at processing oxygen,” he says.

When moving up the mountain, guides use this rule of thumb: “1,000 feet per day, with a rest day every 3,000 feet of elevation gain,” Harry says. “When calculating our ascent plan, we always use the altitude at which we’ll be sleeping. All of our expeditions are structured this way.”

It’s important to remember that symptoms compound each other: “If you’re dealing with a headache, you won’t sleep well,” he says. “Bad sleep makes you weaker and makes it harder for your body to acclimatize. It’s a vicious cycle.” 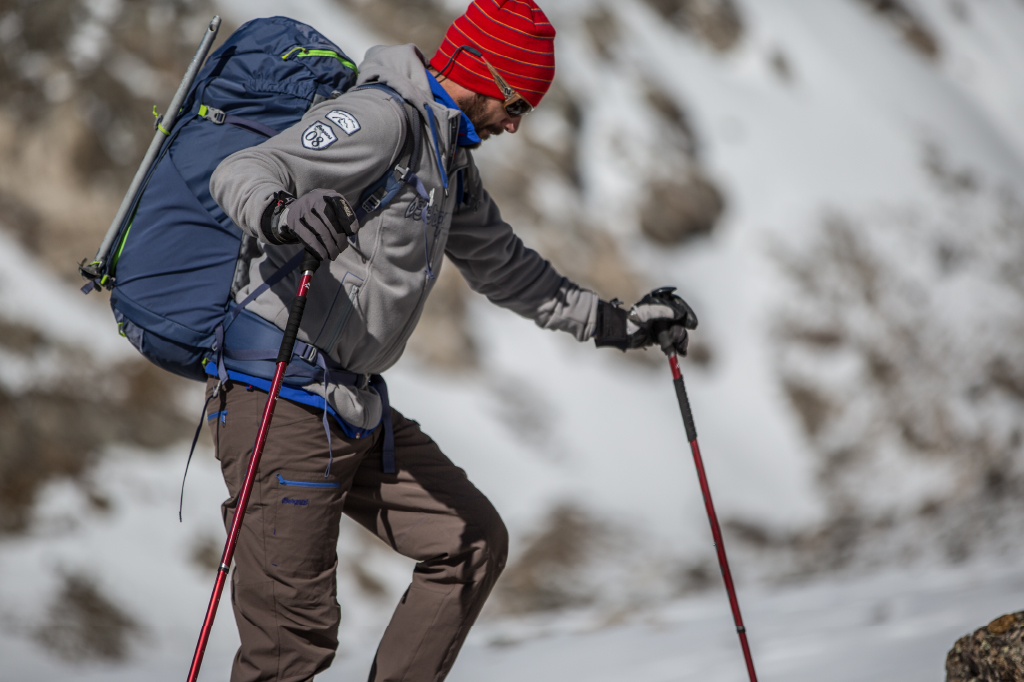 Prepare your body in the months prior

It should go without saying that you must be very fit to climb high.

“There’s no way around it,” says Harry. “The stronger and fitter you are, the better you’ll acclimatize and the healthier your body will be throughout the trip.”

He stresses building your aerobic fitness. The book Training for the New Alpinism is a great place to start. As the bible for the mountaineer as an athlete, it presents training plans designed specifically to coach you toward high-altitude goals (and offers nutrition education and more).

Even with a high level of fitness, Harry requires that clients bring the three-drug set to combat potential altitude sickness: Diamox for AMS, dexamethasone for HACE, and nifedipine for HAPE. “As operators, we don’t go up without those.” 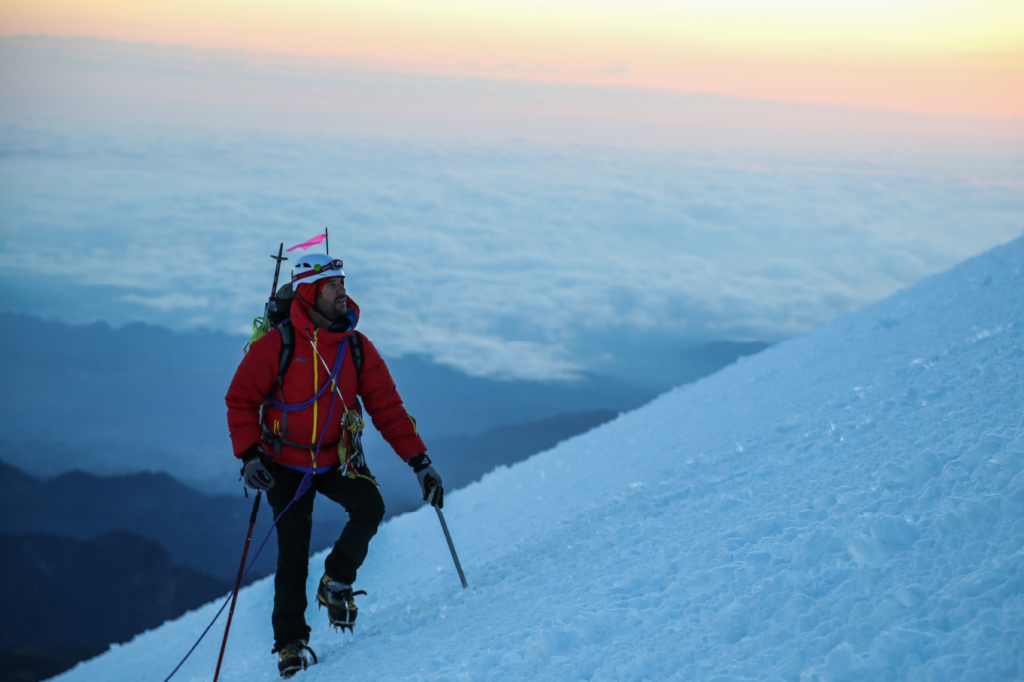 High on the mountain, your body swings through all kinds of survival tactics as it works to adjust.

“It’s easy to lose your appetite at altitude,” Harry says. “I once ate a mere 2,000 calories over four or five days while summiting Everest.” Because of this, he says, pack food that you like and find easy to eat. Consider its consistency and whether it’ll freeze. For snacks, Harry likes GU because it goes down easily. For dinners, he recommends freeze-dried meals that require little energy expense.

Every hour while climbing, he makes his clients eat at least 200 calories. At camp, he encourages people to simply lie in their tent and eat. “It can take time to get it in you,” he says. 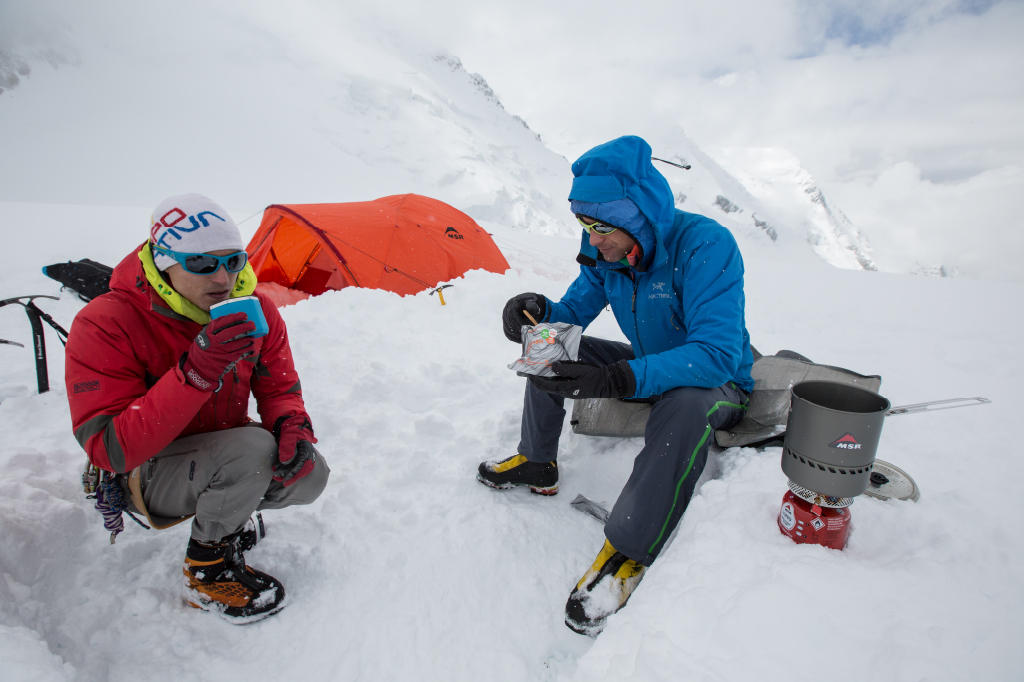 Another way to keep gas in your tank is to stay well hydrated. “Not only is the air very dry,” Harry says, “your body wants to rid itself of water as part of the acclimatization process, so you get dehydrated faster.”

However, liquids are crucial for your body to function properly. Dehydration leads to fatigue. Harry challenges himself to drink six liters of water per day. 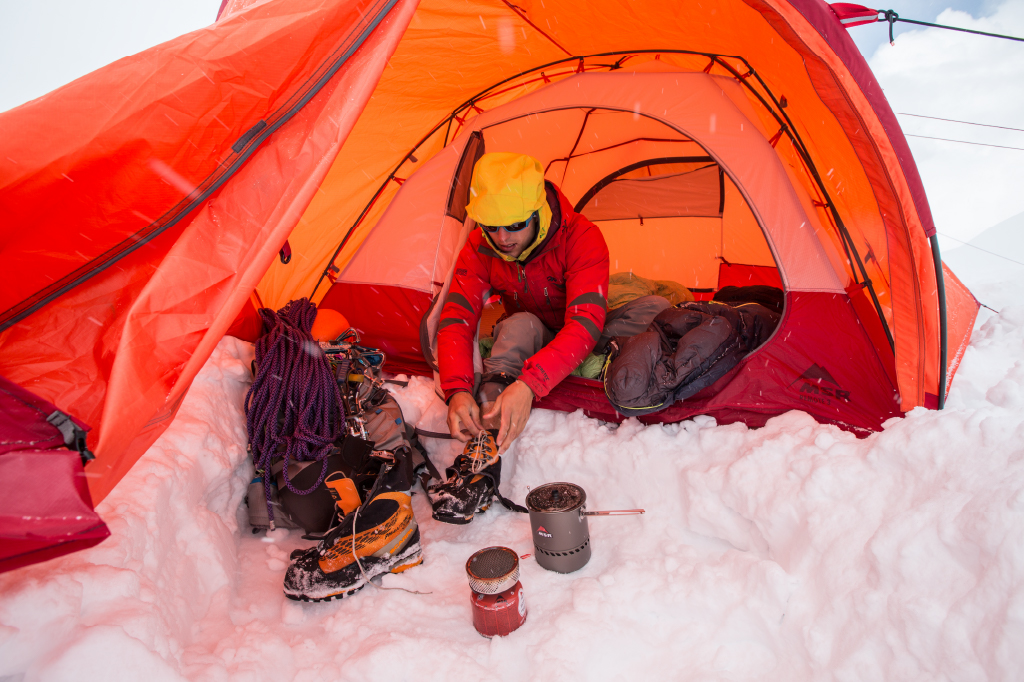 Colder temperatures, harsher winds and intense solar rays reflecting off the snow make the environment at altitude far more extreme. It’s critical to cover up and maintain your warmth, Harry says. These common afflictions can sneak up on you:

Frostbite: Frostbite occurs when your skin and its underlying tissues freeze. Typical on fingers, toes, noses and cheeks, it creates an area of white, firm skin. It’s exacerbated by altitude, because your body is struggling to perfuse oxygen. “It’s actually pretty easy to miss,” says Harry. “That’s why I’m a big proponent of handwarmers and erring on a side of extra warmth.” Once it occurs, you must descend to have it treated. Don’t rewarm the area until you can keep it warm.

Snow blindness: Your skin isn’t the only thing that needs protection from the ferocious sun. The intense light reflecting off the snow can also burn your retinas, leading to snow blindness. Invest in proper glacier glasses and wear them.

Hypothermia: Harry notes that while hypothermia might seem easy to avoid with proper clothing, it’s hard to treat high on the mountain if you fall victim to it. “Things go wrong a lot quicker at altitude and are harder to fix,” he warns. “Severe hypothermia combined with hypoxia [low oxygen in your blood] can cause confusion and make it difficult to complete simple tasks.” Signs of hypothermia include pale or blue lips, shivering uncontrollably, and then ceasing to shiver altogether. 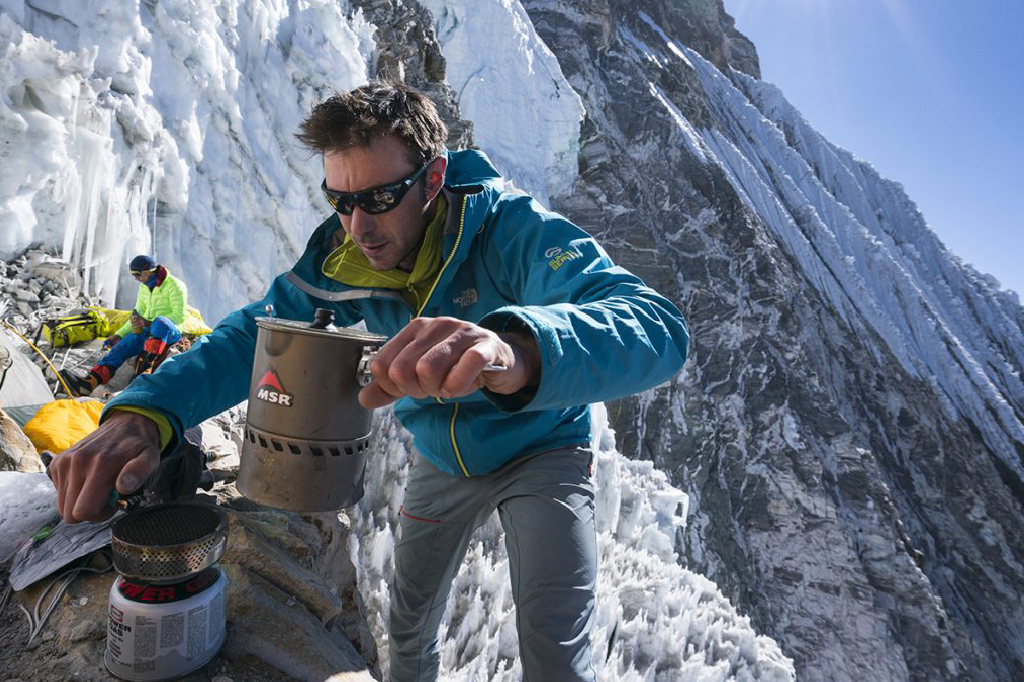 Aside from a more rigorous clothing system, most winter gear is the same regardless of which mountain you’re on. Of particular note, however, is your stove.

Many canister stoves struggle or fail at altitude. That’s because the cold temps reduce the pressure in the fuel canister, causing the stove’s output to drop. Therefore, if you wish to use a canister stove, choose the Reactor or WindBurner stove system, which feature built-in pressure regulators that combat this effect. These stoves also run off MSR’s Isobutane fuel which performs better at lower temps.

In the most extreme conditions, your best bet is a liquid fuel stove. The remote fuel bottle allows you to manually maintain the stove’s pressure in any conditions for reliable output. 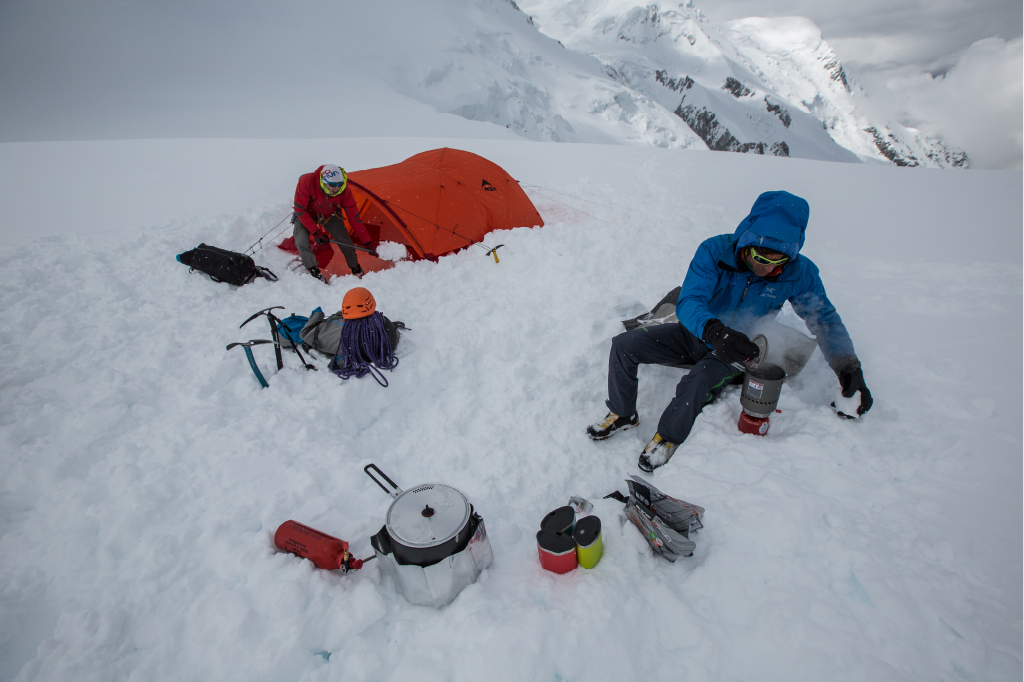 Don’t make this your first time for… everything

Because the effects of altitude can be unsettling the first time you experience them, Harry advises going up only after you’ve developed a proficient level of technical climbing. In other words, learn your climbing skills in lesser environments, because all other tasks are harder the higher you go.

“Headaches in the middle of the night can be scary and disconcerting the first time you experience them,” he says. “Performing small tasks like putting your boots on at 20,000 feet will take more time. Up here, you don’t also want to be learning how to climb.” 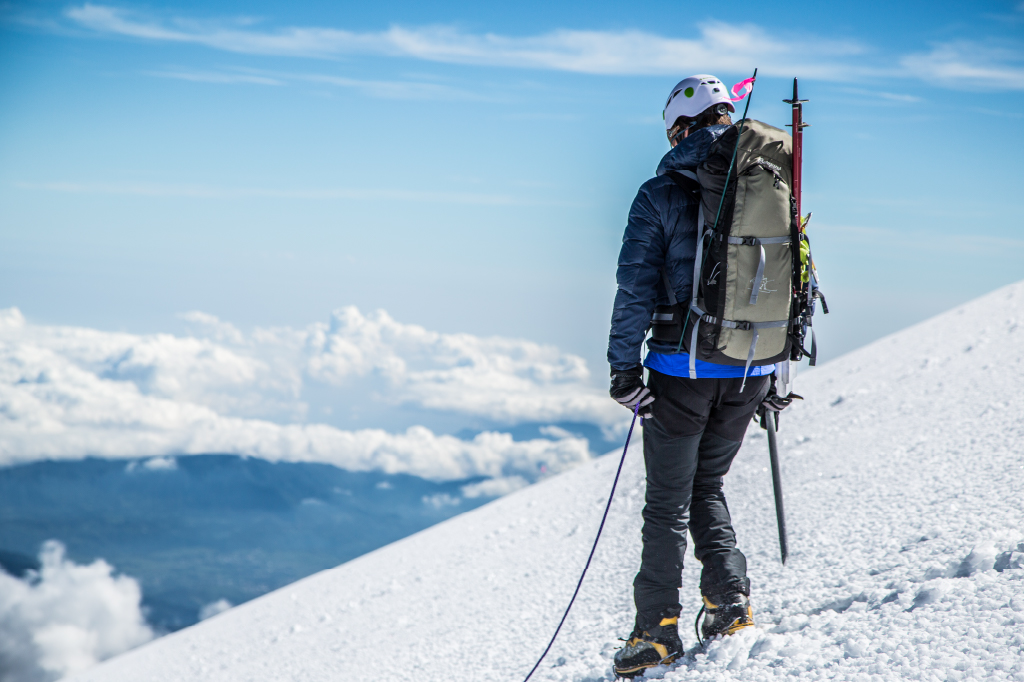 Having spent months at high altitude, Harry knows the surroundings get to your head after a while. This is especially true in the Himalaya where dramatic scenes on the mountain can affect you emotionally. “Do something that gives relief from where you are,” he says. “Watch Netflix, do crossword puzzles, read, socialize with others. It’s easy to hole up in your tent and let your mind run. Touches of the outside world go a long way toward staying positive in that austere world.” 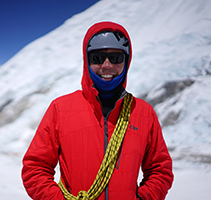 Harry Hamlin has guided climbs all over the world, from his local mountains in Washington’s Cascade Range to the Andes in South America and the Himalaya in Nepal. Last year, he guided an expedition to climb Everest and Lhotse, the 1st and 4th highest mountains on earth.