You unzip your tent on a cool fall morning. As you step out, you have one thought: Coffee. You light up your canister stove and crank it up to full blast, but for some reason, it seems to be taking a lot longer to boil water than last evening. Is it the lack of caffeine, or is the stove really slower this morning? What’s going on?

Seasoned backpackers will recognize that the pressure has dropped in their fuel canister now that it’s cooler outside. A stove’s output relies heavily on its fuel pressure, so when that pressure drops in cooler temperatures, your stove’s output naturally declines.

But it’s not just cooler temps that cause this pressure drop. The mere act of running your stove causes its canister to lose pressure. (This is because as fuel vaporizes, it cools, and cools the canister down.) This means that each back-to-back pot of water you heat with that same canister will take longer to boil.

But certain canister stoves—such as MSR’s Reactor and WindBurner Stove Systems, and our ultralight PocketRocket Deluxe—are not nearly as affected by this pressure drop. They consistently deliver fast boil times across a range of conditions: from warm afternoons to cool mornings and cold alpine evenings.

What allows them to do that?

These stoves feature a tiny component called a pressure regulator—and it makes a huge difference.

What is a pressure regulator?

This tiny component lives inside the stove’s valve. It controls how much fuel pressure is fed to the stove. Regardless of what’s happening externally that might be affecting the canister’s pressure, the regulator ensures the stove is getting the correct pressure it needs to operate optimally.

The trick is, MSR engineers designed these three stoves to operate optimally at a very low pressure level. This means the canister pressure can drop substantially before the stove starts to lose its power. The regulator makes sure the stove is always receiving that precise (and low) pressure. The stove will run at full output as long as it does.

Most backpacking stoves aren’t pressure-regulated. So as their canister pressure drops, their output also declines. A stove with a regulator, in contrast, isn’t hindered by that drop in canister pressure (remember it’s designed to operate optimally at a very low pressure and the regulator maintains that pressure). Because of this, you enjoy fast boil times regardless of what’s happening to the canister.

In other words, the regulator keeps your stove cranking at full output across a wider range of conditions and scenarios—hot days, colder days, full canister, low canister and everything in between.

It also means that when your canister is low, the stove isn’t struggling. This saves you fuel. Therefore, a pressure regulator also boosts the efficiency of your stove, which means you can carry less fuel. 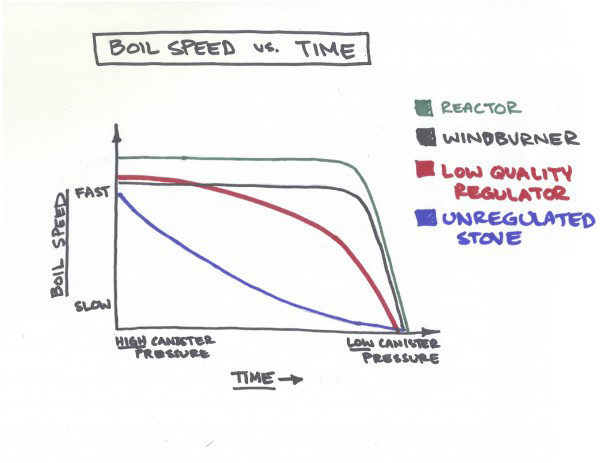 If you really want to geek-out, here’s what that looks like numbers: An unregulated stove is designed to deliver its max output at 70°F. At this temperature, the canister pressure is 45 psi.

When the temp drops to 50°F, canister pressure drops to 30 psi. As you run your stove, your canister cools further, easily dropping to 22 psi. And on that cool fall morning (40°F) your stove may actually only be putting out less than 60% of its power.

In contrast, MSR’s pressure-regulated stoves are designed to run at full output at just 15 psi (Reactor) and 16.5 psi (WindBurner and PR Deluxe). The regulator ensures the stove only receives that precise pressure regardless of the real pressure inside the canister.

It’s only when your canister is nearly empty or the conditions are extremely cold that the pressure will finally drop below the limit of the pressure regulator and you’ll notice it a performance drop.

All this means that with a well-regulated stove, you’ll enjoy high stove performance through a far greater range of conditions. And your fourth pot of water will boil just as fast as your first.

How does a pressure regulator work?

The regulator is located inside the stove’s valve. It, itself, features a tiny poppet valve. This valve is controlled by a small diaphragm that is constantly comparing the atmospheric pressure to the pressure headed toward the jet. As it reads these pressure differences, the diaphragm opens or closes the poppet valve to allow more pressure in from the canister or to cut it off. In doing so, it makes sure that the stove’s jet is always receiving the precise pressure we want it to.

Are all pressure regulators created equal?

Pressure regulators are intricate pieces of technology and they’re not all engineered equally. At MSR, a substantial amount of the R&D that went into our WindBurner stove system and new PocketRocket Deluxe was dedicated to its regulator alone. The precision tolerances that are built into a quality regulator are critical and take a great deal of engineering time to achieve. That’s why only a few companies offer stoves with regulators in the first place, and why they vary in performance.

As depicted in the chart above, a stove with a well-designed regulator delivers its optimum BTUs relatively consistently, until its canister ultimately drops below its regulated level.

A stove with a low-quality regulator will start off impressively, then quickly plummet in performance, offering neither consistency nor efficiency.

Of course, there’s far more that goes into the design of a stove that impacts its overall performance. But in challenging conditions, a good pressure-regulated stove will be more dependable and consistently faster than conventional stoves—so you can make that hot cup of coffee, and get on with your day of adventure.