Former MSR Engineer Redwood Stephens shares what it took to create the Reactor Stove and the technology behind its unrivaled performance.

When MSR’s Reactor stove system debuted in 2007, the outdoor industry didn’t know what to make of it. Its oddly shaped burner and specially designed pot—which featured strange fins on the bottom—didn’t look like other backcountry stoves.

Was this a mountaineer’s dream? Or just hype?

As the world’s fastest, most fuel-efficient all-condition stove system, the Reactor is still the gold standard on everything from pioneering expeditions to overnight backpacking trips. 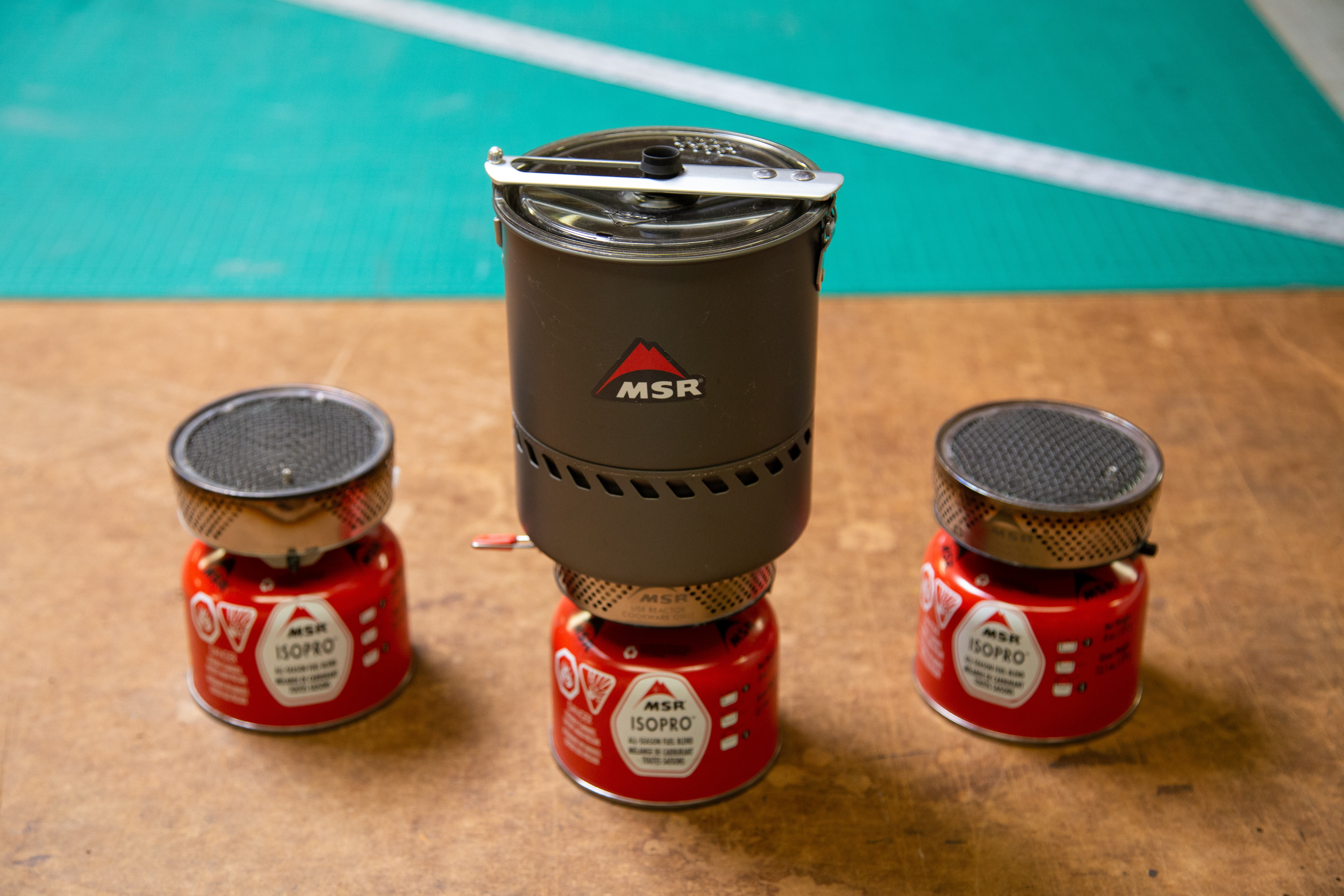 So how did this high-tech stove come to be? And whose brain devised it?

It starts with the spirit of invention and a cabin in the woods.

The origin and inspiration

Redwood Stephens grew up in a one-room cabin in northern California, surrounded by his eponymous towering conifers. Kerosene lamps for light. A wood stove. A gravity-fed well. Later, his family installed a large solar heating system.

Innovation surrounded him. “My upbringing was focused on inventing systems to live better off the grid,” he says.

He spent his youth kayaking, mountaineering, climbing and backpacking, before moving to Seattle to earn a degree in mechanical engineering. In college, he took a job at MSR as a lab tech, eventually becoming a product designer.

“I spent a lot of time in the combustion lab, testing and modifying stoves,” he says. “And I really started to gain a background in combustion back then.”

After college, Redwood entered the fuel cell industry, where he learned the complex inner workings of hydrogen fuel processors. When he returned to MSR in 2003 armed with such expertise, he was primed to produce something truly revolutionary.

“I took the knowledge that I gained working on really scientific high-tech, high-efficiency heat exchanger and combustions systems and applied that to the Reactor Stove.” 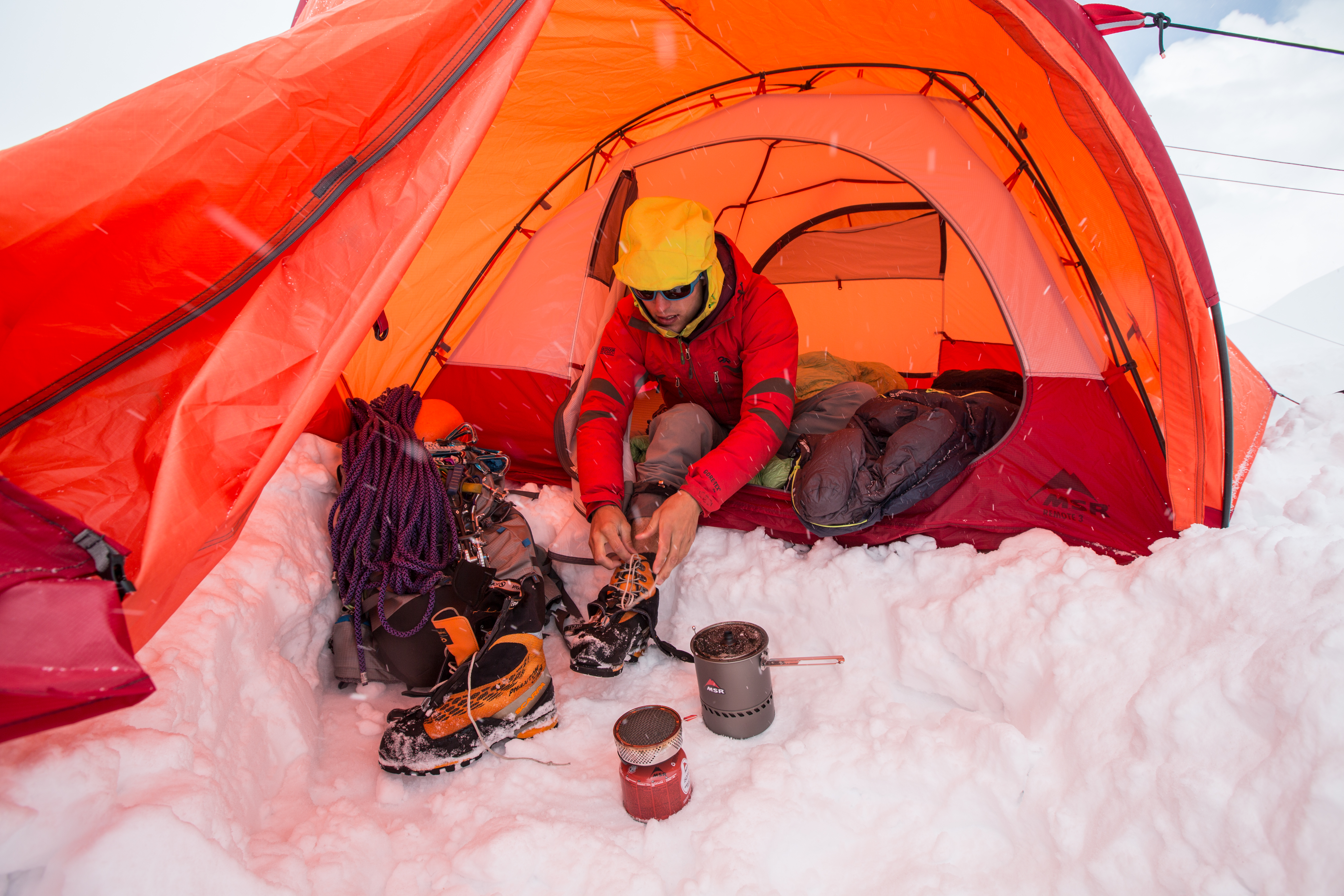 A hyper-efficient unit for mountaineers

As a climber, Redwood knew the burden of hauling stove fuel into the backcountry and that lightening your load meant moving faster and easier. He set out to engineer a hyper-efficient unit to ease that burden.

“We thought if we could make a stove with 80% efficiency, we’d reduce the fuel you need in half! That’s huge,” he says, “especially if you’re melting snow.”

He began by looking at how stoves perform combustion. Traditional stoves use the external air around the burner head to mix with their fuel and ignite their flame. But that wastes a lot of heat.

Instead, he wanted the Reactor to draw all the air it needs in through ports located near its jet. This would force the air and fuel to mix inside the stove. By doing so, the fuel mixture would not become diluted with excess air, thus staying as hot as possible and maximizing the amount of heat transferred to the pot. 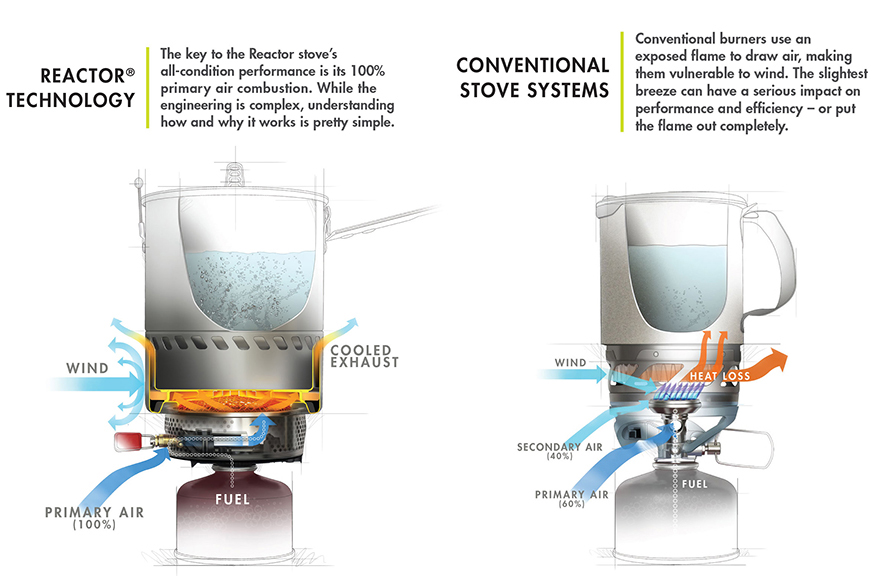 Called a “100% primary air design,” this system is key to the Reactor’s incredible fuel efficiency—80% efficiency versus 40% of traditional stoves. Today, only MSR’s Reactor and WindBurner stoves feature this state of the art design.

Windproof and fast in real-world conditions

If you’ve ever been in the alpine, you know wind is an ever-present foe to basic duties like tent setup, general relaxation and… cooking. Redwood’s new stove tackled that.

Because the air and fuel mixing would happen inside the Reactor, he could design the stove’s pot to fully enclose the flame and protect it.

This enclosed design ramps up efficiency for two reasons: The stove is now windproof in challenging mountain environments. And, all the heat that it’s generating is immediately captured by the pot and transferred to its contents.

To maximize that heat transfer further, Redwood added a heat exchanger to the bottom of the pot. Those strange-looking fins increase the heat-absorbing surface area and move that heat to the water or snow inside the post as fast as possible.

Its windproof design and integrated heat exchanger helped give the Reactor its astounding boil times, to the delight of mountaineers.

After reviewing numerous burner types, Redwood settled on a radiant burner, which offered all the properties he needed for his system. 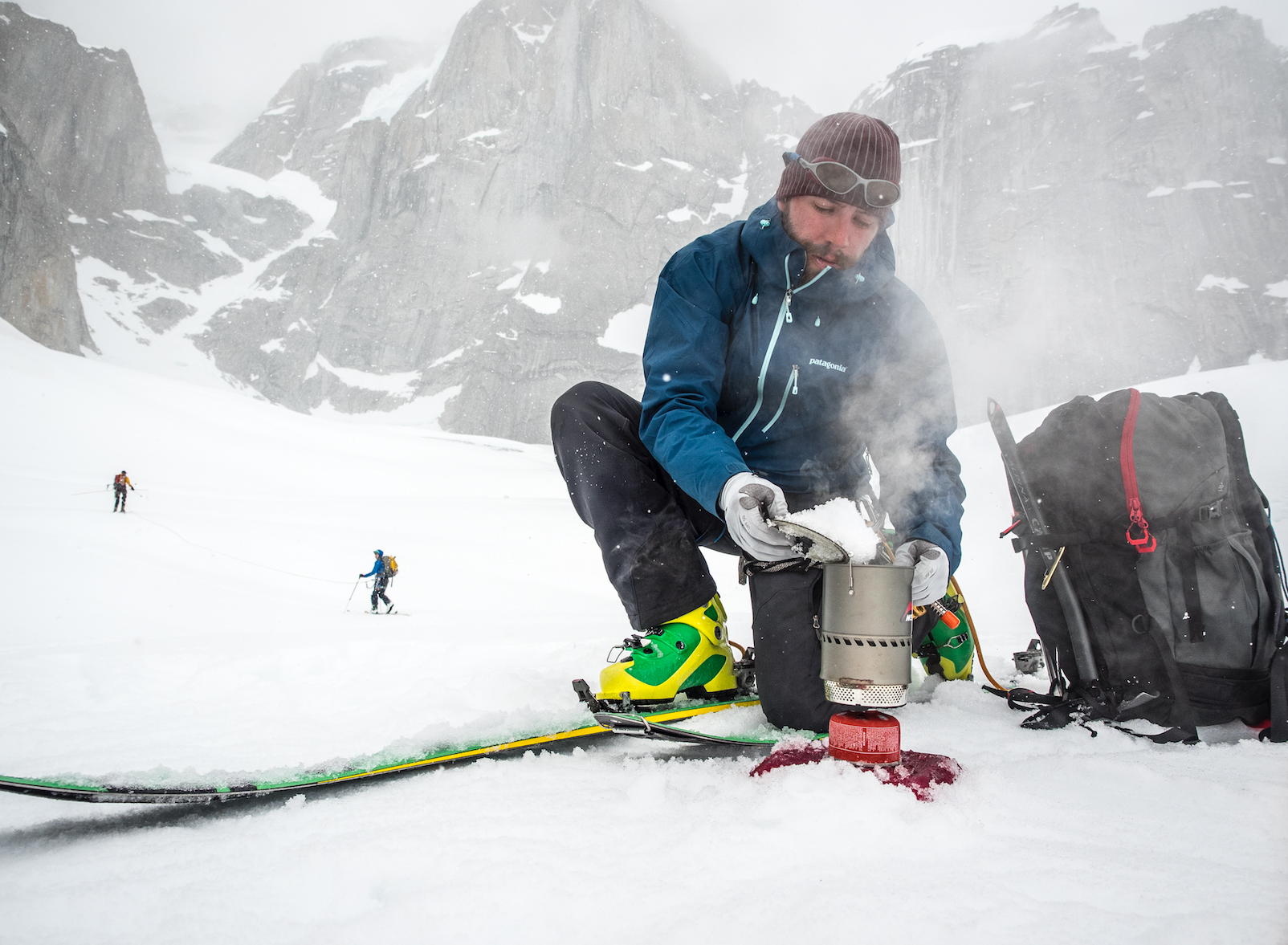 Consistent performance across a range of temperatures

The Reactor would have been a powerhouse with its 100% primary air and windproof design. But Redwood and his fellow engineers weren’t satisfied. They knew this stove would be relied on by adventurers across a range of environments, temperatures and altitudes.

“The Reactor is like a Ferrari,” Redwood says. “It’s tuned up to do a handful of things really well—work in high wind and melt a lot of snow or boil a lot of water efficiently. We had to make it reliable across variabilities in the environment.”

To do so, they built the Reactor with a pressure regulator. The regulator allows the stove to operate at full output regardless of fluctuations in the canister’s pressure. (Canister pressure changes constantly with temperature, altitude, and other environmental and usage factors.)

“If it’s a hot day, the pressure in the canister can be upwards of 70 psi, but up in the mountains it might be 5 psi,” Redwood says. The regulator neutralizes these variances for the stove, keeping it cranking consistently through them all, so that you enjoy more hot meals fast wherever you are.

Combined with quality materials, a sleek appearance and MSR’s renowned durability, the Reactor’s cutting-edge technology earned it a respected spot in the haul bags and packs of expeditions around the globe. 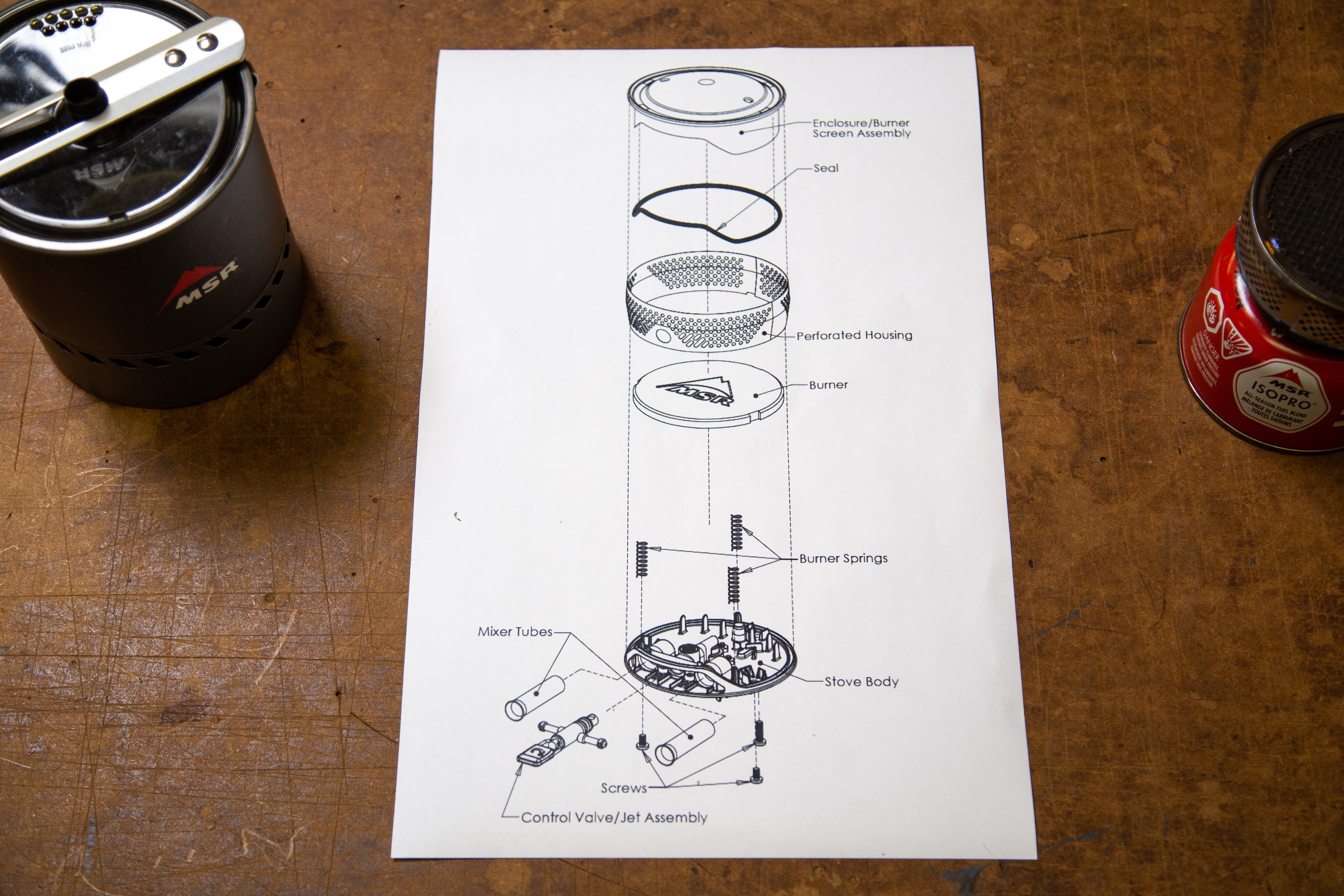 The design culture that produced the Reactor

While Redwood’s expertise helped invent the Reactor, so too did the culture of MSR. Redwood was the protégé of those who had designed the XGK and WhisperLite stoves, which were smash hits in the backcountry. He and his fellow engineers on the project had a legacy to uphold.

“Nobody wanted to make a product that would fail in the backcountry because MSR’s heritage was all about developing well-tested products, going back to ice axes and climbing helmets,” he says.

The Reactor was a solution to real-world needs, and the stove was tested to the nth-degree.

“MSR was the pinnacle for people who really depended on their gear for survival. And we took that responsibility seriously,” he says. “You couldn’t be an armchair designer. You were expected live it and make sure that gear worked in the real world.”

A product like the Reactor doesn’t occur every year. It can take years to develop something truly revolutionary. But MSR fosters those far-fetched ideas and is proud to employ engineers who generate them.

“I think there’s this spark that some people have to try to do something that hasn’t been done,” Redwood says.

“It took a lot of resources to design the Reactor and we didn’t know if it was going to work. I remember telling some old combustion engineers that I wanted to develop a camp stove that was 100% primary air and they said, it couldn’t be done.

I believe that taking that risk is just something that dreamers do.” 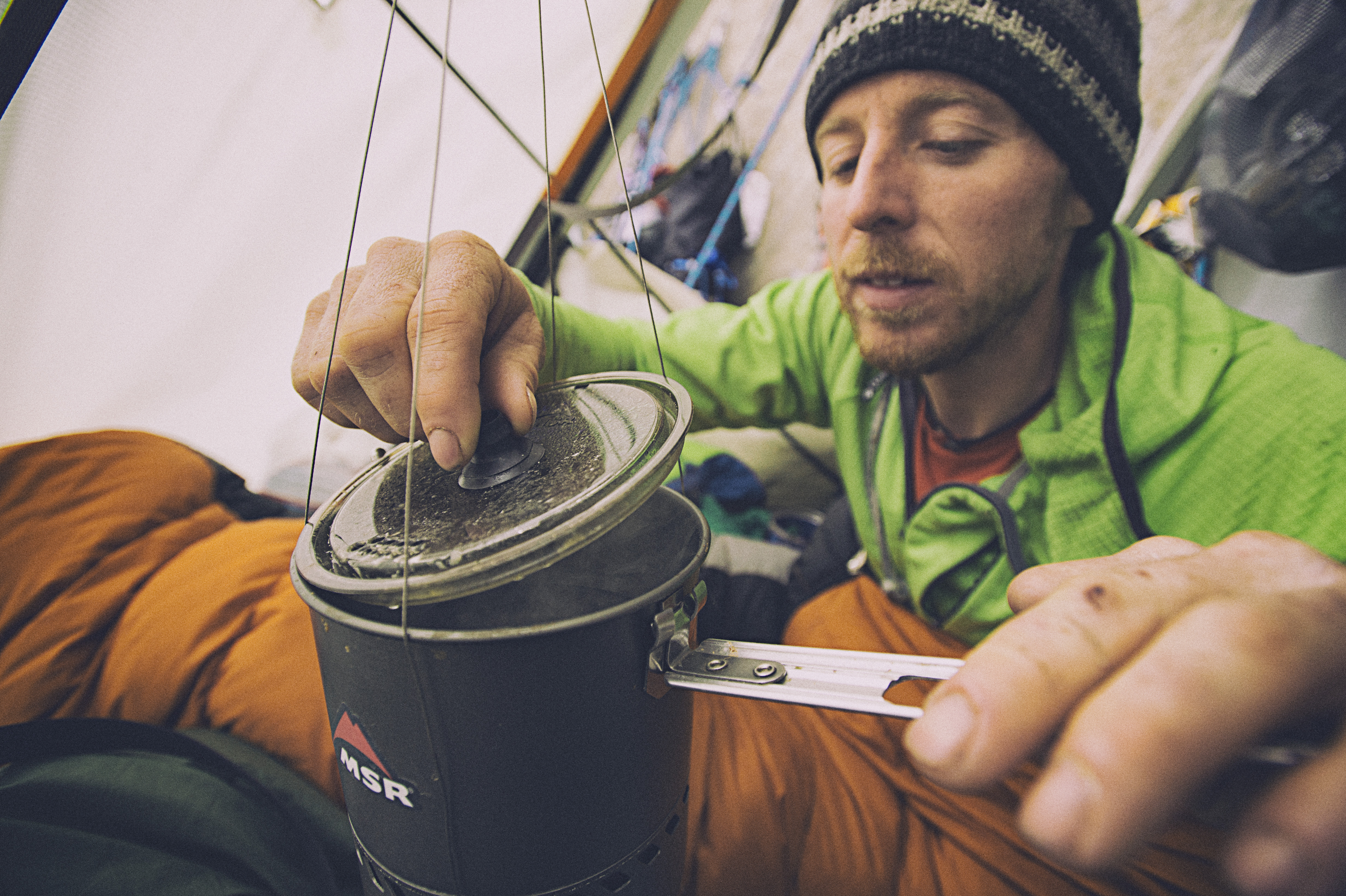 50 years ago, MSR began as one man’s quest to create better, safer, more reliable mountaineering equipment. Today, we’re still an intrepid team that believes in challenging convention to engineer greater solutions to real-world issues. Along the way, we’ve remained inspired by you—the world’s passionate and unruly dreamers. Join as we celebrate this milestone and 50 Years of Unruly Dreamers.