Brown, silty streams, tea-colored rivulets, even clear, ice-cold lakes—any backcountry water source can serve up a cocktail of contaminants. But not everything that’s present in an undeveloped water source is necessarily harmful, and only some things pose an immediate threat to your health. In fact, it’s impractical and unnecessary to remove everything, all the time. So in terms of backcountry water treatment, when is water considered safe to drink?

The types of contaminants that make water “dirty” depend a lot on that source’s surrounding environment. But most contaminants can be placed into these categories:

Microorganisms- Simply put: tiny bugs or germs. Microbes are the primary focus of treatment devices because of their immediate and potentially serious risk to your health. The pathogenic ones include bacteria (e.g., E-coli, Salmonella), protozoa (e.g., Giardia, Crypto), and viruses (e.g., Hepatitis A, Norwalk).

Tannins & Humics- This natural organic matter (NOM) leaches into wilderness water as plants decay, staining it a tea color. They’re not harmful in small quantities, but they do impart odors and a bitter taste to the water.

Metals- Metals, like lead and mercury, can result from industrial contamination or natural erosion. They vary in potential health risk, but you can check with the ranger station for any local precautions before venturing out.

In terms of backcountry water treatment, what defines water that’s safe to drink?

In the context of backcountry water treatment, water is usually considered safe to drink when it is free of pathogens—disease-causing microorganisms (bacteria, protozoa and viruses). This is because these microbes are considered the “immediate threats.” Swallowing even a few of these pathogenic critters on a short-term backpacking trip can make you sick with flu-like symptoms, possibly very rapidly.

In contrast, other non-biological contaminants, while not appetizing, typically take a much greater amount to build up in your system and cause you harm (usually from repeated long-term exposure). If your favorite backpacking loop makes you drink repeatedly from sources with pesticide runoff, that’s not a good thing. But in general, backcountry zones are relatively low-risk for those types of contaminants and the trace amounts you’d ingest on a typical trip likely aren’t enough to agonize over.

That said, it’s important to assess your own risk level and include drinking-water collection as part of your trip planning process.

Are water treatment devices required to prove their removal claims?

Given the many contaminants in backcountry water and the complexities of removing microorganisms, it may surprise you to learn that water filters are unregulated. There is no testing requirement that ensures a portable water treatment device actually removes the pathogens it claims.

This makes it all the more crucial to buy from a reputable company. To ensure the safety of MSR water filters, we voluntarily test them to a standard developed by the EPA and NSF. This 10-day, multi-criteria test, called NSF Protocol P231, is based on municipal water treatment requirements. It tests a product’s ability to stop targeted pathogens and requires that half the water used is so difficult to treat it’s referred to as “worst case” water. Our purifiers, devices that remove viruses in addition to other microorganisms, are tested to NSF Protocol Testing P248. Testing to this standard allows MSR to confirm the reliability of our products to remove the harmful microbes in real-world conditions.

Needless to say, researching a water treatment product before you buy is critical to your health.

But, what about removing the other stuff?

Microorganisms are the primary focus of water treatment devices because they pose the most immediate threat. But how do you remove those secondary contaminants?

First, it’s important to understand that contaminants come in a range of sizes. Protozoa, most bacteria and sediment/dirt are considered “larger” on the microscopic scale. Filters that use “size exclusion” media, like ceramic and hollow fibers (with pores smaller than the contaminants) typically filter these out. They act as a sieve, straining out the contaminants.

Viruses are the tiniest of the waterborne microorganisms and require a purifier to be removed/deactivated.

Even smaller still are the tastes and odors from tannins, and contaminants like pesticides, herbicides and metals.

That’s where activated carbon can help. 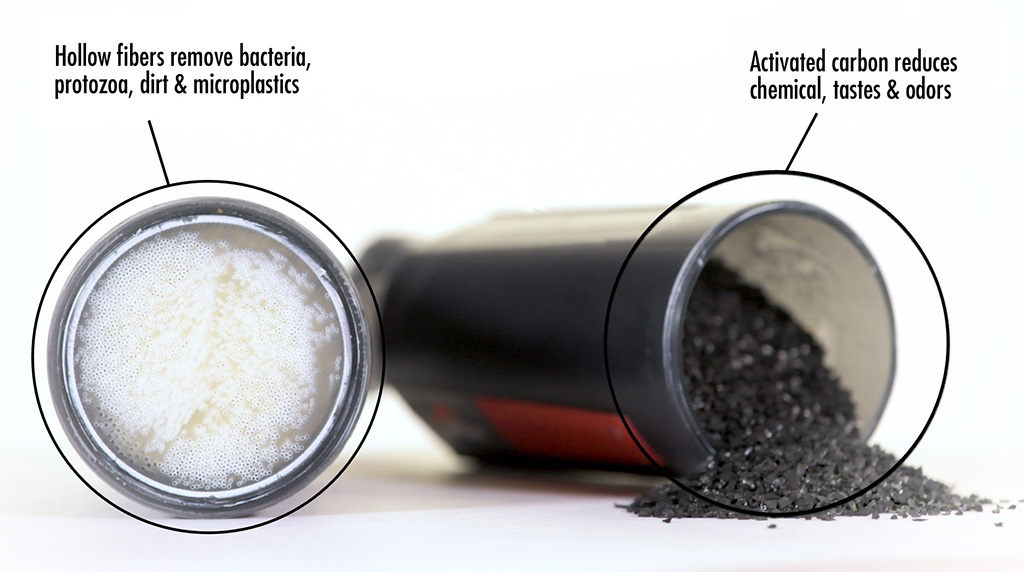 The role of activated carbon

Activated carbon has long been used in treatment devices because of its adsorptive properties—it attracts many types of molecules to its surface and traps them. Carbon is also highly porous, so a small piece provides lots of surface area.

For these reasons, activated carbon is great for catching many contaminants that are so small that they pass through a microfilter or purifier. These include tastes, odors, pesticides, herbicides and pharmaceutical byproducts.

However, it’s important to know that activated carbon has its vulnerabilities. At MSR, we believe carbon is best used as a secondary removal media—another level of protection after you’ve filtered out (or purified water of) the microbes. This is because:

1) When the water’s contamination level is high, the surface area fills up quickly;

2) If the water’s flow rate is too fast, carbon is less likely to catch all the contaminants;

3) Adsorptive filters, like carbon, don’t indicate when their surface is full—so you have no way of knowing when the filter is no longer doing its job.

Therefore, treatment devices that rely solely on adsorption to remove the microbes run the risk of letting some of those immediate threats through to you.

For these reasons, MSR products don’t rely on adsorption/carbon to remove the microbes. The MSR MiniWorks, for example, uses a ceramic element to filter out the bacteria, protozoa and sediment, followed by activated carbon to reduce tastes, odors and chemicals. When viruses are of concern, we recommend the Guardian purifier, Guardian Gravity purifier or the MiniWorks plus Aquatabs® purification tablets.

Activated carbon can make water more enjoyable to drink and adds an extra level of safety, but it’s still important to research where you’re going and the types of filters and purifiers ideal for those environments. A quick call to the ranger station can inform you of any particular local risks. Unfortunately, not even activated carbon will remove everything. But in most wilderness regions, a high-quality filter or purifier can get you out and back—with nothing more than stories of great adventure to share.