As you scan the selection of water filters at your local retailer, or research products online, you may notice that some filters claim to meet certain water filter testing standards. These “Tested To” claims are supposed to help you understand the level of protection that the product provides, and confirm that the manufacturer has indeed verified it. But if you don’t know what those claims mean, they’re not very helpful. We’ll take a closer look to help you understand them. But first, some important general information you should know on the subject of testing backcountry filters. 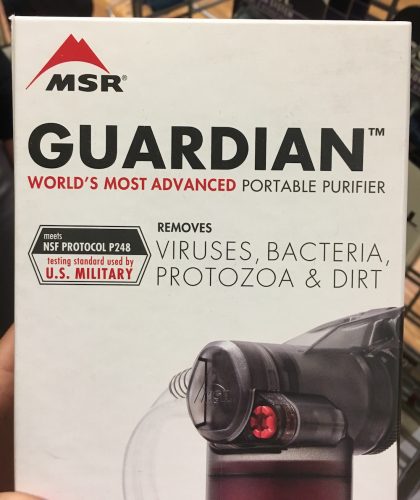 In your home, the quality of your tap water is regulated by the EPA. Long ago, the EPA set standards defining the Maximum Level of Contaminants (MLC) that can be in your water to ensure its safety. The EPA can take legal action against cities that do not provide drinking water up to these quality standards.

But such is not the case for backcountry filters. An outdoor filter isn’t required to pass any tests before it’s put on the shelf. “The responsibility really rests on consumers to educate and protect themselves,” says Zac Gleason, microbiologist and manager of MSR’s water research lab. Because backcountry filters provide users with water for only short periods of time, the EPA doesn’t police them. “Any device can be sold as a backcountry water filter, and there’s no authority confirming that it will actually protect you against backcountry water,” says Gleason. 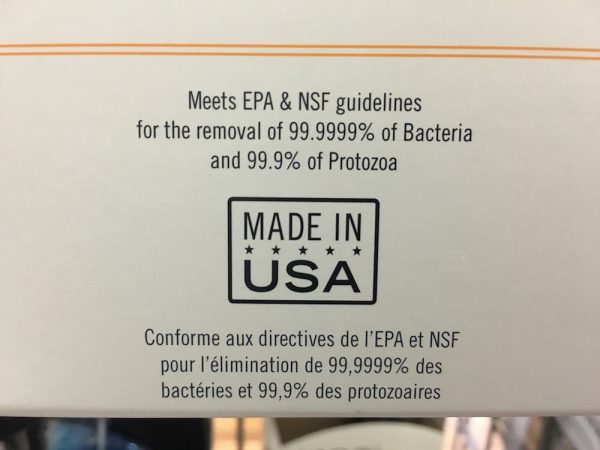 That said, many manufacturers do voluntarily test their products with third-party labs. The NSF is the leading third-party public health and safety organization that has designed efficacy tests for all kinds of water treatment devices based on the EPA’s standards. These NSF standards are considered the scientifically accepted industry standards for backcountry filters as well. Many outdoor filters claim to meet them, so it’s important to know what they mean.

While there are four NSF standards that you may typically see associated with backcountry filter claims, only two of these are appropriate for assessing the general microbiological safety of these filters—and the microbes are what you care about in the backcountry.

This standard covers systems designed to reduce aesthetic or non-health-related contaminants. It covers things like the removal of tastes (such as chlorine), odors, colors or particulates. This test only challenges a device with tap water; it does not test for the removal of pathogenic microorganisms, which may be present in backcountry water.

This standard was mostly developed to test for the removal of chemicals from tap water. The manufacturer picks which chemicals are tested for, so it’s important to check. The test may also vet for the removal of giardia and cryptosporidium (not bacteria or viruses). Because the test only uses tap water, it may not challenge a device the same way you would if you were filtering real wilderness water.

This is the standard you want if you’ll be treating backcountry water, which carries the risk of waterborne pathogens. It’s a more stringent version of the EPA’s “Guide Standard and Protocol for Testing Microbiological Purifiers,” which was designed for outdoor Point of Use filters and which you may also see claimed on the box. Both the EPA’s “Guide Standard” and NSF P231 use tap water and simulated “worst-case” wilderness water that contains disease-causing microorganisms. (They do not test for chemicals.) All MSR filters meet NSF P231 for the categories of pathogens they claim to remove.

This standard is also great to see for backcountry devices because it follows P231, but tweaks the protocols slightly to simulate the way military purifiers would be used on field missions (and to reduce test variations from lab to lab). MSR’s Guardian purifier passes this test because it was originally developed to meet the needs of military squads. P248 also tests for the removal of microorganisms from “worst-case” wilderness water.

What to know about testing to NSF Protocol P231

While most manufacturers, including MSR, send their products to a third party to gain unbiased results, the manufacturer controls how much of the test is actually conducted.

The full NSF Protocol P231 test lasts for 10 days. Five of those days challenge a filter with tap water; the other five with what’s called “worst-case” water—containing elevated levels of organic matter, turbidity, pH and salt, and at nearly freezing temperatures. In addition, the test challenges the filter at the end of the filter’s life to ensure it’s still removing pathogens up until the last moment its cartridge is full. Every MSR filter is tested to the full 10-day protocol.

But not every manufacturer tests to the full protocol. “The tests are very expensive, so it’s not uncommon for companies to test only part of the protocol while claiming their product ‘Meets NSF Protocol P231,’ or ‘Meets EPA standards.’” says Zac. He recommends calling the manufacturer to learn how many days the test was conducted and what volume of water was used.

The bottom line – Know Before You Go

It’s important to know where you will be filtering water and what the potential threats are. Will you be treating tap water or raw wilderness water? Many devices out there that claim to be backcountry-capable yet haven’t been tested to standards appropriate for ensuring the device will keep you safe against backcountry water. Knowing the standards will help you choose the product that’s right for you and your adventures.

MSR recommends always asking the local ranger station about specific waterborne threats in the area where you’ll be adventuring.