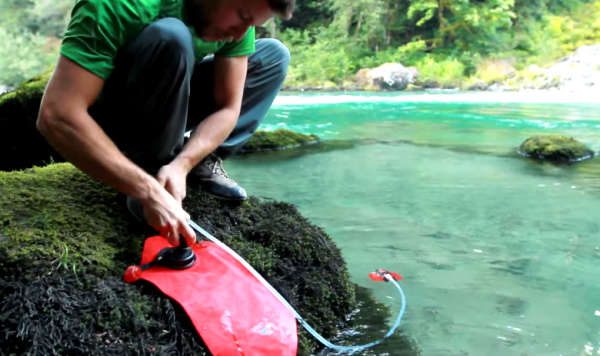 After a long day trekking in the backcountry, that idyllic, trickling stream may look extremely tempting, but a cool sip isn’t worth the risk of ingesting waterborne contaminants. The best way to greatly minimize the risks of infection is by treating backcountry water with a filtration or purification system (more on that later), but you should also educate yourself about the wilderness water contaminants that pose immediate threats to your health, and the backcountry “zones” in which you are more likely to encounter them.

What are the major risks of drinking wilderness water?

The immediate health risks to wilderness water are pathogens:

All of these bugs can make you sick in as little as 24 hours. Symptoms are generally flu-like. Suffice it to say, your trip will be very uncomfortable at the very least if you catch one.

What are the danger zones and risk levels of wilderness water?

You can never truly know whether wilderness water is safe to drink, unless you treat it. But there are some areas in the backcountry that, in general, pose a higher risk of pathogens than others. You can think about these areas in terms of “zones” or “gradients,” though there are always exceptions. Here’s what you should know:

Near inhabited areas, it’s possible for microbes to slip through insufficiently treated drinking water and cause you gastrointestinal problems. But the highest risk of infection from contaminated water is where poor sanitation allows sewage and other waste to pollute the water supply. In these places, including lakes, rivers and even municipal waters, viral pathogens can spread.

Waterborne viruses, which only spread from humans to humans, tend to be more prevalent in populated areas, especially in emergency or disaster situations in developed areas, as well as in underdeveloped countries.

Even in the backcountry—supposedly far removed from populated areas—you can face viral threats. These dangers are greater in campsites and other high-traffic areas that show signs of heavy use or poor sanitation. (Encountering used toilet paper in the woods, for example, is a good indication of people not disposing of waste properly.)

High risk: below the stock line

Lower elevations, such as the subalpine and areas within the vegetation limit, have increased risk of pathogens, particularly in locations where farmers graze livestock in the mountains or high pastures. But it’s not just livestock that poses a threat: beaver ponds, for example, are notorious for spreading giardia, and you never know if a wild animal has contaminated an upper stream and spread bacteria and protozoa down to a lower-level rivulet where you are about to take a drink.

The higher you travel in elevation, the fewer animals and humans you tend to see. Water sources in the high alpine—above the tree line—may, in general, offer a lower risk of waterborne pathogens than below the stock line. However, there is no way to know for sure whether the water is safe to drink or not. An alpine lake one day might be clean and safe, but on another day, a beaver—or even an irresponsible backpacker—may have just done his business nearby. There’s always a danger; even drawing water directly from the source, such as from a glacier, carries risk, as contaminants can seep down through layers of snow to contaminate the glacial ice.

Of course, your immunity also plays a role in whether you get sick from drinking water in the backcountry. One person with a strong immune system may be fine after drinking contaminated water, while someone with a weaker or compromised immune system may get an infection. In other words, don’t let your hiking buddies convince you that a stream is safe because they drink from it all the time—it could still make you sick.

What can I do to minimize risks when drinking water in the backcountry?

Start with the cleanest water possible, as close to the source as you can access. Choose cooler (preferably ice-cold) water rather than warmer water when you can, and avoid drawing water from the muddy bottom of lakes or streams.

Boiling your water will neutralize all wilderness water threats, though it can also use up a large amount of fuel, and unlike using a filtration system, it doesn’t leave you with clear water. Here are the options we recommend for treating water in the backcountry:

Ideal for: high and moderate risk zones, where wild animals and livestock may contaminate water sources.

A water filtration system can remove dirt and sediment as well as infection-causing bacteria and protozoa. We recommend the best-selling MSR® MiniWorks® EX Microfilter, which has a carbon/ceramic element for removing those pathogens as well as particulates, tastes and odors. The MSR® AutoFlow™ Gravity Microfilter is another good option for quickly filtering large quantities of water, and the compact MSR HyperFlow Microfilter is perfect for fast and light travelers.

Ideal for: extreme risk zone, or in very populated camping areas where sanitation may be poor.

Viruses—a lower risk in the backcountry than other pathogens—can only be treated with a water purifier. Currently that includes chemical or UV-based treatment options. Only a chlorine-based solution can kill viruses in murky as well as clear water and maintain water purity even after the initial disinfection process. (In murky water, UV light can miss some of the microbes.) The MSR® SweetWater® Purifier System offers a complete package for protecting against all major waterborne threats and offers a way to filter out silt and sediment. MSR® Aquatabs water purification tablets are a convenient post-filtering solution for rendering viruses inactive, and an easy add if you run across an area where you suspect human contamination.

A water treatment system can help eliminate your risk of infection from a waterborne pathogen; however, it’s also crucial to keep in mind that most people get sick from poor hygiene—i.e. from not washing their hands. So whatever treatment system you pack on your adventure, and whatever danger zones you pass through, remember that washing your hands is key to staying healthy in the backcountry.