It should come as no surprise that rock climbing has soared in popularity over recent years. Between adventurous commercial campaigns, Alex Honnold’s award-winning Free Solo movie and integration into the 2020 Olympics, new audiences around the world have taken an interest in climbing. 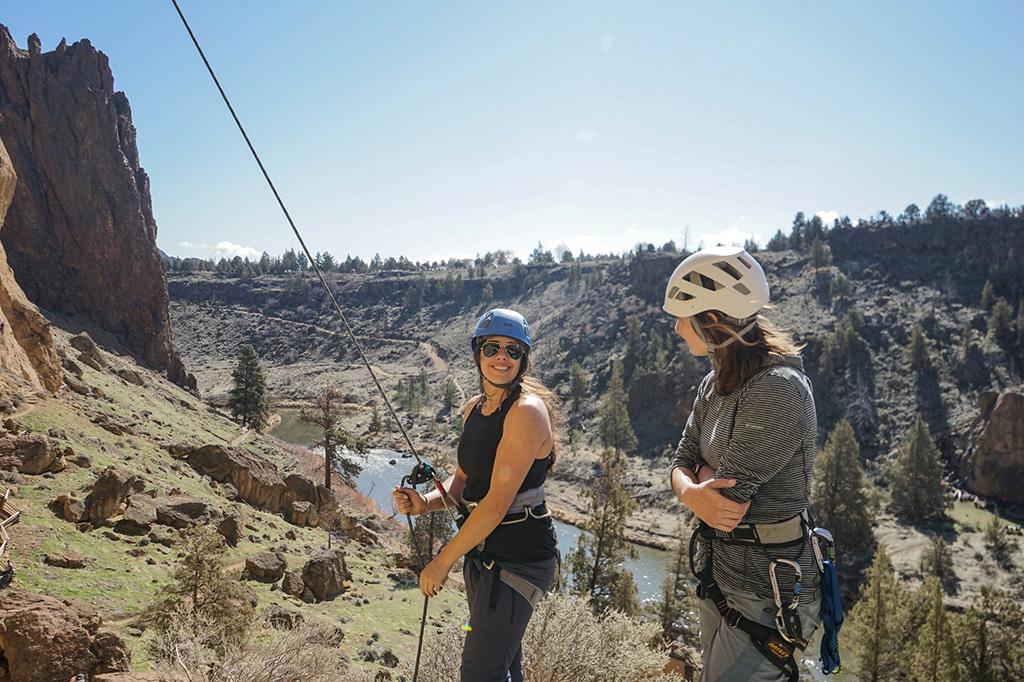 Ten or so years ago, though, climbing was a more obscure activity. If you were interested in learning, the only way to do it was to go outside and figure it out. Today, with the proliferation of indoor rock climbing gyms, it is far easier to break into the sport. For example, learning to indoor rock climb is as simple as signing up for an introductory class at your local gym. Unfortunately, the transition from indoor to outdoor climbing is far more ambiguous.

Outdoor climbing involves a lot of technical skills that indoor rock climbing does not encompass. At a gym, you don’t need to know how to set up and clean an anchor system, or even how to load a GRIGRI at some gyms. With more and more people walking through the doors of their indoor climbing gyms, it’s inevitable that outdoor climbing will see a similar rise in numbers. 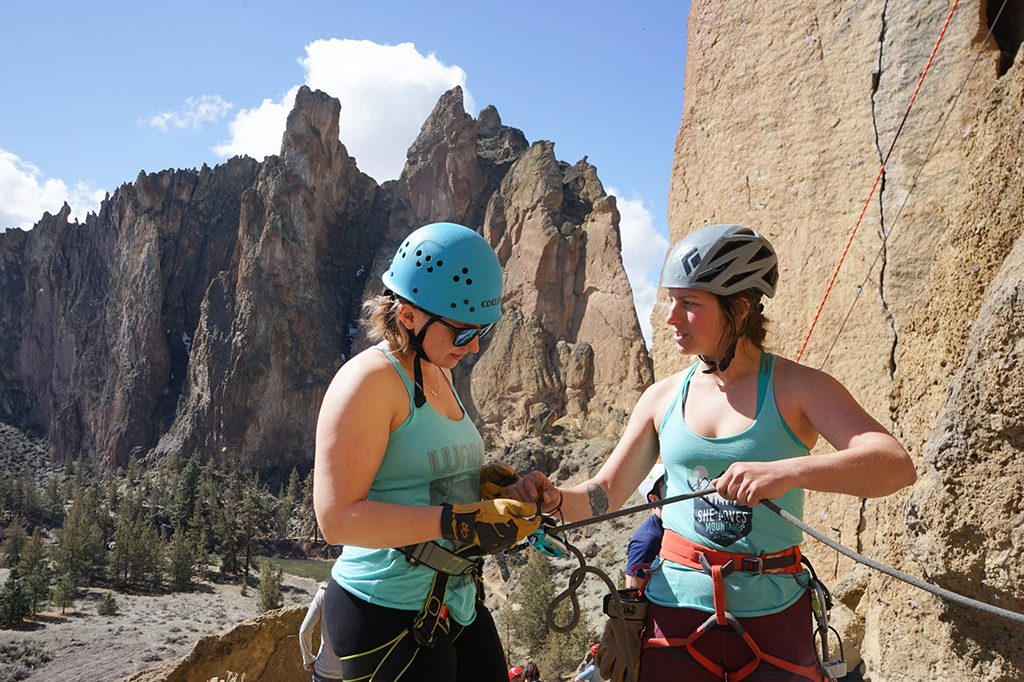 The Importance of Female Guides

This massive wave of beginner climbers has led to a disparity in the amount of people in need of mentors and the number of people proficient enough in climbing to be mentors. Because of this mentorship gap, the need for rock climbing guides is more critical than ever. As more and more people hire guides to learn the sport, it is indispensable that there are both male and female guides, as guides have a large part in shaping the mentee’s experience and the public’s perception of what constitutes a rock climber. Having both male and female guides demonstrates that anyone is capable of being a badass rock climber.

Over the years we’ve accumulated different preconceptions about males and females, including the idea that men are individualistic with a high-risk tolerance, while women are risk-averse. While some people continue to hold onto these presumptions, climbing is one of the few sports where gender is irrelevant. In 1993, Lynn Hill was the first person, male or female, to free the iconic Nose on El Cap. Today women continue to climb at the same caliber as men, proving the sport is no longer a boys club.

With more females guiding it means beginner climbers have a greater chance of learning from a woman. Whether it be a male or female client, learning to climb from a woman challenges any notions of female fragility or weakness. As more women enter climbing and guiding, we can shift the narrative around gender norms and expectations. When a woman exhibits expert knowledge and strong climbing skills, it uplifts the entire female climbing community. 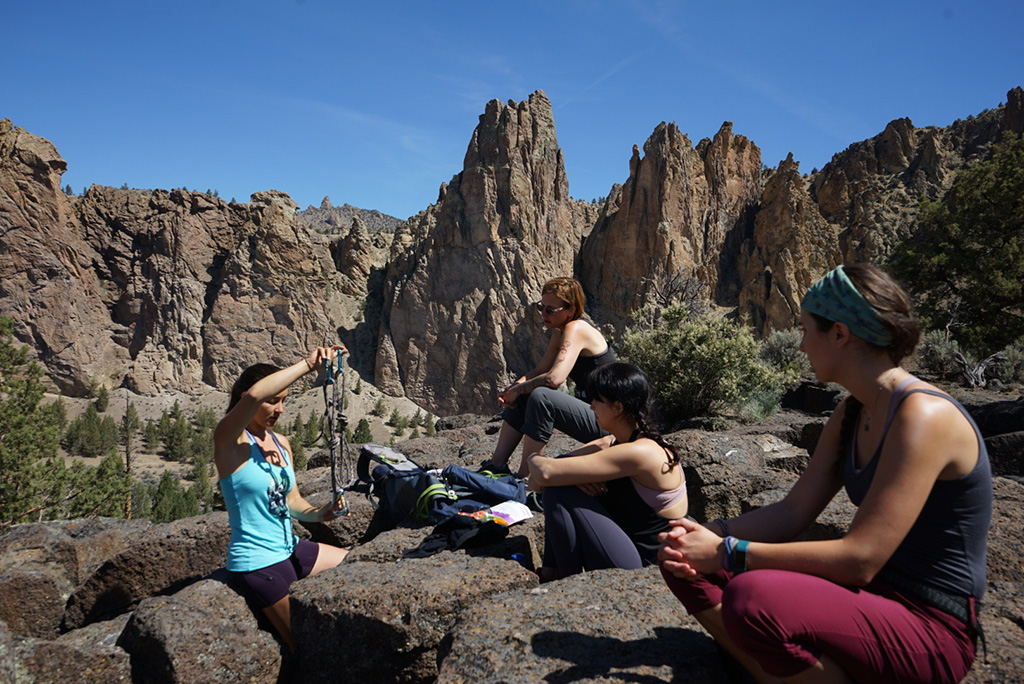 While we are making great strides to eliminate gender stereotypes, they are deeply entrenched and the climbing community is no different. In 2017 Flash Foxy conducted a survey with Brooklyn Boulders to investigate whether gender impacts one’s experience at a climbing gym. Based on the 1,500 individuals polled, women are twice as likely as men to experience uncomfortable situations at the climbing gym. What is important to acknowledge is that women are reporting these unpleasant interactions and are discouraged from joining the climbing community.  This impression of climbing is unfair because there is space for everyone in our community.

As women-specific events and organizations appear across the country, it is clear that women seek to participate in greater numbers in climbing and guiding. A women-owned and operated guiding company in the Pacific Northwest, She Moves Mountains was founded on the idea that to increase the number of women rock guides first there needs to be an increase in experienced female climbers. The company offers skill-based clinics for various levels aimed at creating competent and confident climbers. SMM also has a Mentorship Program where women interested in guiding can learn more about the industry and shadow instructors during clinics. (Disclaimer: the author is the Director of Backpacking for SMM.)

The American Mountain Guide Association has also recognized the need for more female guides. In 2019 it held its first all-female Rock Guide Course and continues to provide numerous scholarships that center on female empowerment. As women continue to pave the way for one another in climbing and guiding, future climbing generations will build upon our accomplishments and lessen the gender gap. Elevating more women not only cements women’s place in the climbing community but creates a far more inclusive culture.

Tory Lesce
Tory is a first-generation Cuban American who is passionate about lowering barriers to the outdoors and working in all-women environments. She spends most of her time climbing, hiking, traveling, and working. Tory is the Gifts & Relationships Officer at ZGiRLS, a non-profit that teaches confidence-building skills to middle-school-aged girls, and also the Director of Backpacking for She Moves Mountains, a female-owned and operated guiding company. When Tory isn’t busy with working and exploring, she enjoys cooking, spending time with friends and family, and talking to dogs.