Snowshoe technology reaches back thousands of years and across the globe, but in recent years it’s made history right here in the Pacific Northwest—and MSR has a lot to do with it. Take a look and see how our MSR Denali™ and Lightning™ snowshoe models helped usher in a new era of snowshoe innovations and design.

The modern snowshoe looks very different from the traditional hardwood and rawhide designs of old. The shift to new materials—aluminum and plastic—in the 1970s allowed for smaller, lighter and more durable frames. Other innovations soon followed: suspension binding systems increased the snowshoe’s efficiency, making it possible to traverse long distances in rough and mountainous terrain, while integrated cleats helped cut through ice and crusty snow. Just as revolutionary, however, were innovations introduced by MSR, including injection-molded plastic decks, modular flotation and 360-degree traction.

The story of innovation begins with a meeting of the minds between MSR and big-wall climber and mountaineer Bill Forrest (1939-2012). Known as much for his climbing inventions—from harness leg loops and ice anchors to the daisy chain—as for his climbing feats, Bill devised a concept for a technical snowshoe that addressed a weakness in the market at the time: the snowshoe’s limited traction. The standard frame design featured aluminum tubular frames that tended to slide in the snow, with only crampons at the center for traction. Bill, who would always say “Tubes don’t cut it,” decided to make something better.

Bill created a prototype of a molded, modular snowshoe and brought it to the Winter Outdoor Retailer tradeshow, where MSR President Dave Bartholomew recognized the concept’s potential. Later MSR would buy the rights and hire Bill as a product designer. His concept, matched with MSR’s ethos of designing functional, simple and reliable gear combined with manufacturing knowledge, would eventually develop into the Denali snowshoe.

The Denali: the first injection-molded snowshoe

It was 1995 when MSR launched the Denali line, and all MSR snowshoes have been manufactured in the United States ever since. Featuring the first-ever injection-molded polypropylene plastic deck, the patented design integrated the snowshoe deck with the frame for superior traction and durability. Two riveted-on traction bars with martensitic stainless steel teeth offered “terrain-devouring” perimeter traction. The Denali Classic snowshoe featured a wider deck than a similar but more streamlined Denali Evo™ snowshoe, which was introduced in 2004 with a narrower design for greater efficiency.

Both game-changing designs included a Modular Flotation tail—a  small and lightweight attachment option that added surface area to the frame for increased flotation in deeper snow and packed away easily when not needed. They also featured a Televator™ heel lift that saved energy and reduced calf fatigue on steeper climbs. Both innovations would influence future MSR designs.

If the Denali snowshoe line signaled a revolution, its legacy, the MSR Lightning™ Series, was an evolution. By the time the Lightning model was introduced in 2004, the snowshoe had undergone nearly a decade of R&D to realize Bill’s dream of creating an ultralight snowshoe. Obsessed with weight, his belief that “an ounce on the foot is a pound on the back” drove his and MSR’s commitment to the design.

While the Denali featured a plastic deck riveted to traction bars off the perimeter, the Lightning design moved the traction further out and replaced the parallel traction bars with a continuous, laser-cut piece of ultralight 7000-series aluminum riveted in one spot to create MSR’s 360° Traction™ technology, providing edge-to-edge traction with minimal weight.

The Lightning also replaced the polypropylene deck with high-tensile polyurethane fabric (a material also used in our MSR Snow Fluke), which added flex and shaved half a pound off the overall weight. The combination of the deck and the traction increased the snowshoe’s efficiency, allowing you to travel farther and longer in the backcountry—and enjoy yourself more in the process.

The technologies that went into our Denali and Lightning snowshoes helped make MSR the leader in the snowshoe industry. But there’s always more work to be done, and over the next 10 years, MSR developed other innovative features to improve the snowshoeing experience and make it more enjoyable. The Axis steel crampon was introduced in 2009 on our Lightning Explore models, offering superior gait efficiency by making walking more easy and natural, and in 2014 we took traction and durability further with the release of our MSR® Revo™ snowshoe models.

A bomber all-terrain snowshoe, the Revo evolved the Lightning’s 360° Traction technology by moving the traction out to the shoe’s perimeter, so the external steel traction walls with aggressive teeth could offer an even more powerful grip with every step. Its ExoTract™ deck extended injection-molded plastic over the T-bars and nose mold for torsional flex and durability in any conditions.

In 2019, the MSR design team took our knowledge of material science and pushed the paradigm once again with the launch of the new Paragon snowshoe binding.

Offering maximum foot security for adventurers in challenging terrain, the Paragon binding was thoughtfully designed to be so comfortable and natural feeling that the user never notices they’re wearing it.

The Paragon binding incorporates two intelligent solutions: a single mesh strap and toe stops. The mesh strap offers impressive foot control and a comfortable fit free of pressure points. Toe stops prevent your toes from sliding forward when descending. Both of these features also make the binding easier to put on.

A far cry from wood and hide snowshoes of old, the high-performance designs of today are reliable, efficient tools for everyone from serious alpinists to everyday explorers. As a company founded on the goal of making reliable, functional and more efficient gear, we’re proud to be a part of the snowshoe revolution and the legacy of innovation that made fresh tracks 20 years ago—when Bill Forrest and MSR came together to reinvent the snowshoe. 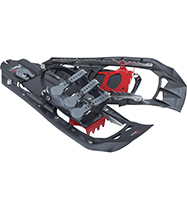 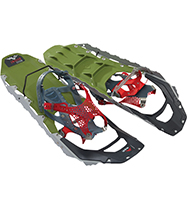 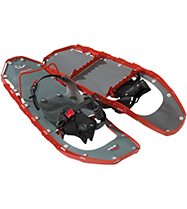 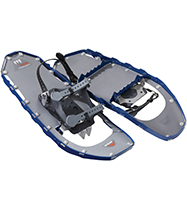