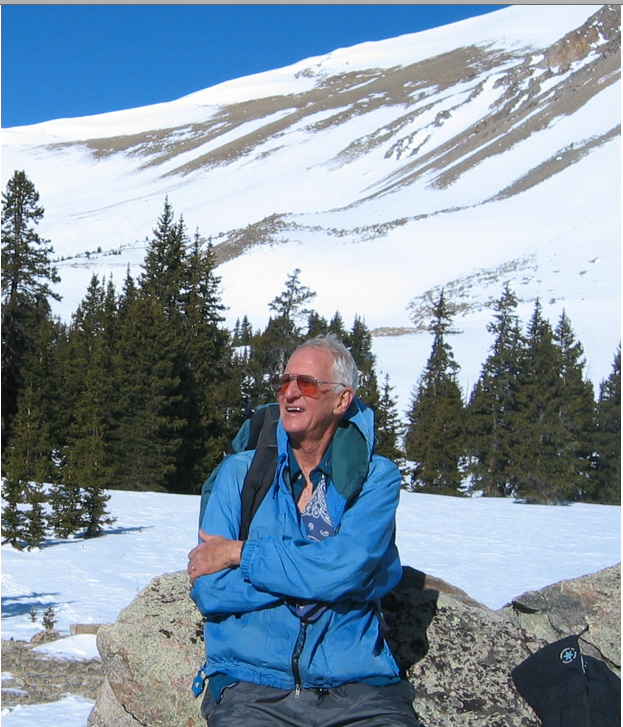 This week, the climbing community and MSR lost a dear friend. Bill Forrest, the Colorado climbing legend and prolific inventor, died of natural causes snowshoeing on Monarch Pass, near his home in Salida, Colorado. Our thoughts and hearts are with Rosa, his beloved wife, who was snowshoeing with him at his side when he passed.

We were first introduced to Bill Forrest in the winter of 1994, when Bill showed us a prototype of an innovative new snowshoe he had built – it was plastic molded with steel traction bars lining the length on each side, steel crampons, and modular tails that could be interchangeable to allow for more flotation when needed. The idea was brilliant, and came to him in the winter of 1993/94 when he was training for a climb on Mount Everest’s North Ridge by climbing 14,000 foot Colorado peaks every weekend through the winter. Skis or snowshoes were needed for approaches but the snowshoes at the time were lacking in traction and durability. Bill really wanted his wife Rosa to join him and since she didn’t ski, he set out to create a better snowshoe-the Forrest snowshoe.

Early in 1995, MSR purchased the Forrest snowshoe design and hired Bill as a full-time employee to develop the snowshoe, and work on other R&D projects. In August of that year, MSR successfully showed the new Denali snowshoe at the Outdoor Retailer tradeshow and made the first sales of the shoe. Since then, design improvements have been made every year but the original concept of Bill’s snowshoe continues to stand the test of time and has become one of MSR’s best-selling products-the Evo Ascent snowshoe.

In the fall of 1999, while freelancing with MSR, Bill came up with another brilliant idea and showed us his revolutionary concept for the ‘White Lightning’ snowshoe. The concept featured 360-degree perimeter traction, exceptionally light weight, vertical crossbars for additional traction and open tension buckles for simplified binding attachment. MSR worked with Bill to evolve this concept into what is now the MSR Lightning Ascent snowshoe, which is-in our humble opinion-simply the best snowshoe ever invented.

“Bill Forrest was a great mountaineer and an incredibly creative designer of mountaineering equipment. He repeatedly recognized climber’s needs before anyone else and came up with brilliant ways of solving those needs, though he never sought the recognition that he deserved for bringing many new types of gear to the climbers of the world,” said John Burroughs, owner of Cascade Designs, parent company of MSR. “I had only a few opportunities to hike and climb with Bill but it was always a delight to hear his comments on the outdoors and how much he loved it. The world has lost a great climber, designer, and human being.”

Thank you, Bill Forrest – standard-setting innovator, climber and friend. Your contributions to MSR and the outdoor community have shaped the way we experience the outdoor world. We will continue to look to you for inspiration in design and, perhaps most importantly, to remind us that many of life’s greatest rewards are to be found in the hills.

Friends and fellow snowshoers, consider taking your snowshoes out into the mountains this weekend, pause for a moment, and pay tribute to this great man whose shoulders we all stand upon.

R.I.P. Bill Forrest, may your soul forever linger in the serene peacefulness of those high peaks.