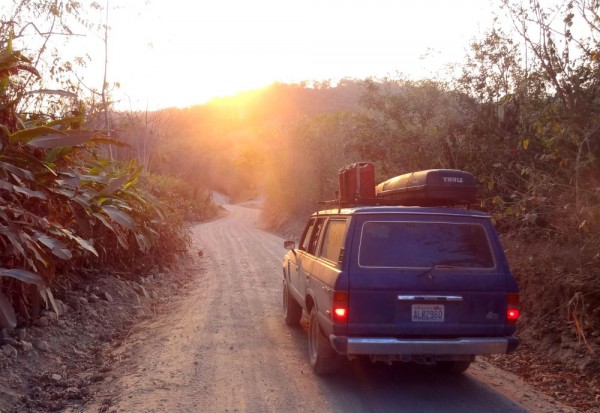 Entering Costa Rica offered a stunning visual of a country that chooses to cherish its environment.  The aesthetics of a healthy landscape are obvious and this vitality seemingly permeated through individual personalities and communities alike. Enthusiastic to soak in the tranquility we headed to the mountainous cloud forests of the northeast to explore the stunning Rio Celeste. Flowing with a hue unmatched in liquid beauty, the river cascades through boulders and basins protected by dark green jungle walls that hold the mystery of this unique place. Days passed by as we took in the surrounding landscapes via Land Cruiser and on foot. Our worn legs eventually carried us back to lingering evenings highlighted by traditional meals of rice, beans, chicken and plantains we collectively prepared. Pura vida lifestyle had quickly set in and from the easy reaches of our hammocks strung out beneath the flawless nighttime sky we could only imagine what was to come. 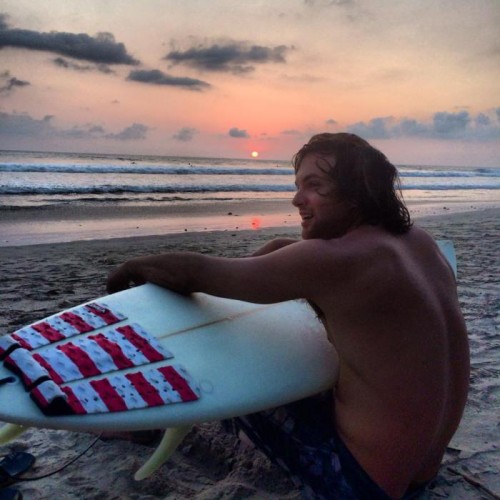 With time we parted ways with the mountains and reunited with a hard-charging university mate from home. This reunion was akin to picking up a fresh solider to take straight to the front lines. There he stood at the airport armed with a surf board and spear gun ready to conquer, capture and go deep Off-Belay. With our reinforcements secured we ventured toward the Pacific Coast, taking a ferry across the Gulf of Nicoya, driving washboard roads across cattle ranges, traversing banana plantations, and finally down three miles of beach highway where we reached our destination in the surf hamlet of Santa Theresa. Fueled by his insatiable zest for life, our days kicked off well before the local roosters and howler monkeys had a chance to start their morning ruckus. 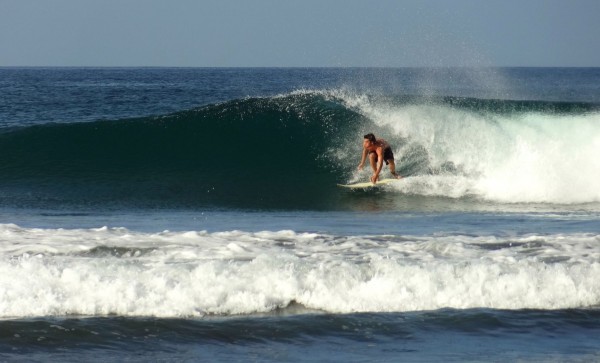 Our days in Santa Theresa began with dawn patrol surf sessions full of clean waves, absent of the midday hordes of competing surfers. Come midday we piled in Beckey, our faithful Land Cruiser, and drove south across dry river beds and on dusty roads toward the waterfalls of Montezuma. After we had our fill of aerial acrobatics and sunny lounging at this natural water park we motored back to our campsite to start on a feast that had been schemed up by our crew earlier in the day. Forming into tactical culinary teams we whipped up traditional gallo pinto, fried plantains, and tropical fruit salad underneath the protective reaches of our MSR Zing tent. As the smuggled-in Nicaraguan rum flowed, we grilled beef above an open fire that had burned down to hot coals. It was a smashing success that left everyone absent of want with the exception of more rum. 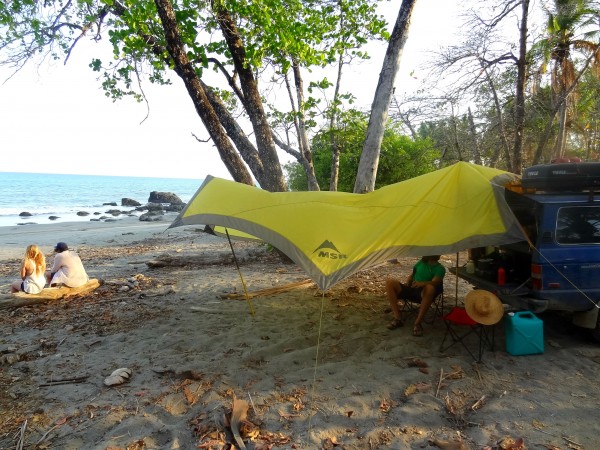 At a certain point, the group migrated to the beach to build a bonfire, if not for the heat then for the captivating accord brought by its glow. We soon noticed that the brilliance of a thousand flicking stars was playing itself out in the dark waters of the Pacific before us.  This captivating light show drew us from the fire into the water to sit front row while millions of luminous plankton performed. With stars high above and fluorescence among us we were nestled in one of nature’s most vivid light shows taking one beyond the realm of typical imagination. A genuine appreciation for the creativity and intelligence behind this design couldn’t possibly escape the most hardened of skeptics. A day such as this must have a formal curtain call and ours came as the reaches of the rising sun touched the skyline suggesting we bid adieu and retreat to our hammocks.

The next day we loaded Beckey down and ventured north up the coastline to the town of Marbella just down the beach from Tamarindo.  Our host Andrew, a friend of a friend from home, was gracious beyond words and even provided us with beds to sleep in (we had been about a month without). As our guide to his backyard beach paradise, he toured us to the surf in pursuit of the ocean’s waves and natural bounty. We rallied early each morning, first chasing the surf and then with fins, masks and spear guns we chased our lunch. As Poseidon would have it, the conditions were prime and even better the spears found their mark allowing us to take our tithe of the ocean’s bounty. With the skill of a local Tico, our host showed us how to prep the fish with cilantro, red onions, and tomatoes doused in a bath of lime juice to make fresh ceviche. Forty minutes later, after the acidity of the lime juice did its part, we dove into the ceviche with tostadas prepped on our trusty WhisperLite stove and were all smiles taking in the flavors bite by bite.

The beauty and bounty of Costa Rica was a treasure to unearth during our time in the country. Costa Rica left us rejuvenated and eager to carry the pura vida lifestyle on the road south.