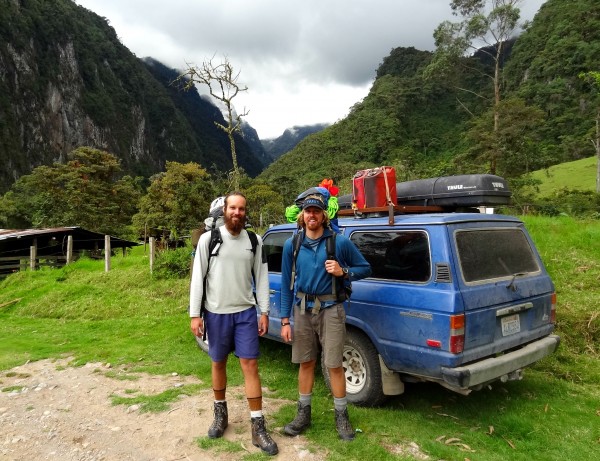 Climbing in the digital age presents a philosophical dilemma. With an abundance of information on the web regarding peaks, routes, and beta – the present day adventurer has a decision to make.

On one hand, climbers can take advantage of resources such as SummitPost, MountainProject and other sites that offer full trip reports. Those who choose this path will be well-armed with pertinent information. Information which undoubtedly increases their likelihood of success during the outing. However, it’s not unreasonable to raise the consideration that extensive research detracts from the purity of a climb. It’s easy for online beta to spoil a summit view with a photo from the same vista (always taken on a day with perfect weather), or to suggest you crimp with your left and flag right before committing at the crux of a route.

On the other hand, if one chooses to forgo the research and take a stab at the mountains in the same fashion as our original route pioneers, well, then you have no excuse when a route overwhelms and trouble comes your way. You may be pushed off a peak, ending a weekend of hard work or be forced to drop $100 in cams so you can make a safe rappel off an underestimated route – and those are the relatively small consequences. For the poorly informed climber, personal injury or even death may not be far around the corner.

Such as with many questions in life, the answer likely falls somewhere in between the two extremes. What I do know is that climbing in Colombia does not put you in a “too much information situation.” Our experience has been that climbing beta is thin. 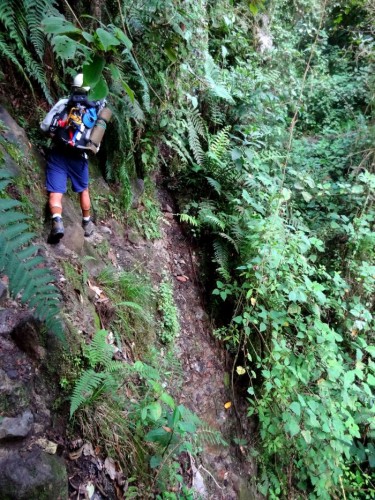 Our first goal in Colombia was to tackle 17,300′ Nevado del Tolima in central Colombia. While this was viewed as a training climb, a successful summit is always the goal. We were able to find a SummitPost page for the mountain and a trip report in Spanish, however route detail was by no means abundant and we ended up underestimating just how long it takes to hike 4,000 vertical feet in the jungle. After hours of hanging vines, snagged packs and a bivy in the only clearing of vegetation for miles, carved out by a waterfall, we made it above the tree line and into the Colombian alpine. Once above the trees it became apparent that visibility would be a problem. We pushed on to 15,500′ and decided to call it. At this point the sun was low, sulking somewhere behind the thick clouds, and navigating the scree with low visibility in the dark was not worth the risk. We retreated to 11,000′ for our final night and hiked out the next morning. The legs and lungs both felt a good burn, so we were content with the result. 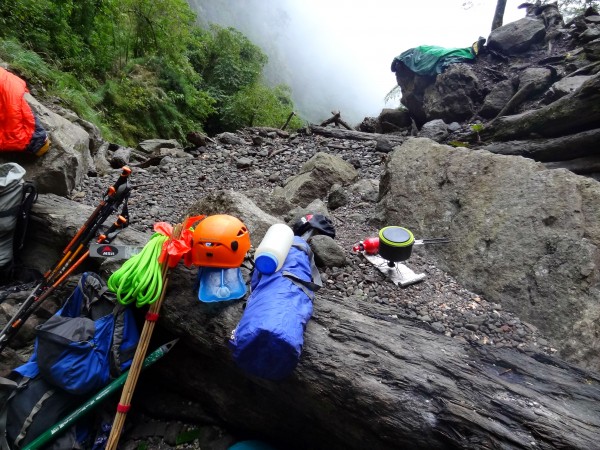 Once back at lower elevation, we changed gears and spent a week volunteering at Connections English Institute in the town of Ibague – only to discover the owner of the institute is an avid rock climber. Weekend plans were immediately set. Seven days of classes and two days of rock later we departed for Suesca, Colombia’s most iconic crag. 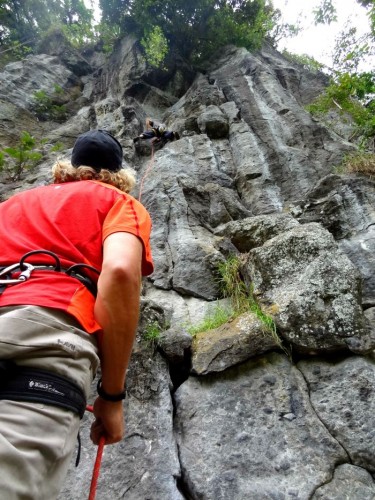 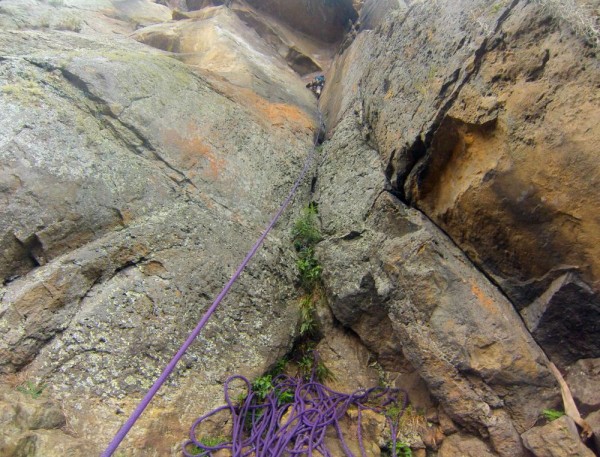 Suesca is a 3km long band of sandstone running above a recently abandoned railroad. Access could not be easier, especially for those planning to camp a night or two at the “Campo Base” located smack-dab in the middle of the crag. Many credit Suesca as the birthplace of Colombian rock climbing and it is not difficult to see why with the abundance of both sport and trad lines as well as the close proximity to Bogota. We purchased a guidebook at the local climbing shop, however it was of little use to us as the book was in Spanish and difficult to decipher. Our only choice was to visually scout routes then give them a go. Fortunately we ran into a Canadian climber who could lead 5.12 and was able to bat clean-up on a route which proved more difficult than it appeared, well maybe two routes.. He too was packing an MSR cook set-up. For two nights we swapped hours of climbing stories over dual burners and beers. New rock and new friends – Suesca was a success. 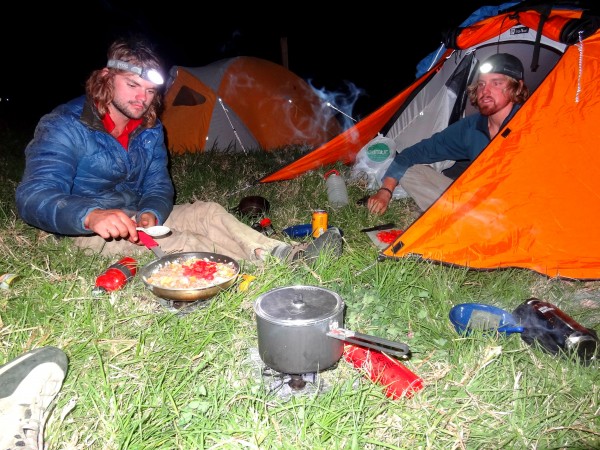 Ultimately, the lack of beta in Colombia did not detract from our time, but added to the adventure. Upon returning to the states, there will always be a struggle as to how much digging we do before departing for the mountains. For now, in ‘America Sur’ it simply is not an issue.