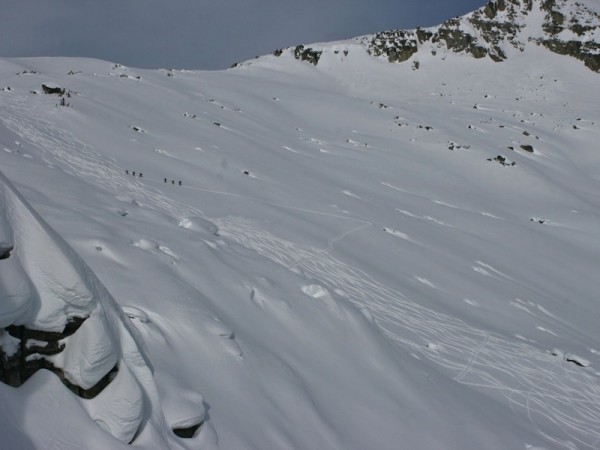 The problem of not recognizing avalanche terrain is not new.

“We didn’t think we were in an avalanche path.” These were the sorrow-filled words told to me by a couple whose friend was buried and killed in very small Colorado avalanche back in 2000.  Avalanche survivors have likely uttered similar words for centuries, and even today the message is still heard after some accidents.

Avalanche terrain can be a broad and complicated topic. But here, I’ll introduce some ideas and key points about avalanche terrain that you may not have heard before. I hope this will encourage you to seek out information. Recognizing avalanche terrain is key to staying alive and having fun in the backcountry. You can’t control the weather or the snow conditions but you can control what you bring, when you go, and where.

What is avalanche terrain?

Avalanche terrain is a place, on or near a mountain slope, where avalanches are able to occur under the right circumstances. Simply put, it’s terrain that’s steep enough for snow to slide. Certain types of terrain invite avalanches to happen more than others, because of the features in that terrain, or the lack there of. Below, we’ll discuss what to look for.

But first, it’s important to understand that avalanches and avalanche accidents are the result of the weather, snowpack, people and the terrain all interacting. The first three factors — weather, snowpack and people — are dynamic, constantly changing. However, terrain is static. It doesn’t change.

Therefore, recognizing avalanche terrain is actually quite simple. Recognizing when that same terrain actually presents an avalanche danger is the complicated part—and can be totally uncertain. (Discussing the likelihood of avalanches based on weather and snowpack is a more technical topic not discussed here. Consider checking the Northwest Avalanche Center for detailed reports.)

The first thing you need to know is that an avalanche releases when the pull of gravity overcomes the frictional forces holding the snow in place. Snow likes to stick to itself in layers (cohesion) and those layers generally like to stick to one another (adhesion). When gravity pulls on all those layers stuck together, a lot of snow moves down the mountain very fast.

Looking at the slope’s angle

The steeper the slope the more gravity is trying to pull it down hill, and in terms of avalanches, any slope steeper than 25 degrees is considered “steep.”

Dry snow avalanches are most common on slopes of 30–45 degrees. Slab avalanches (cohesive layers of snow which can be very soft or very hard) tend to be less frequent on slopes steeper than 45 degrees, as the snow tends not to build up into thick, deep slabs.

However, if you’re a climber ascending a steep couloir during a snowstorm, you should expect loose snow avalanches to spill frequently down the couloir. Very small events are often called spindrift avalanches and are generally more annoying than dangerous. However, you never know when one will unexpectedly be bigger—big enough to sweep you off your feet.

The best way to learn slope angles is to buy and use an inclinometer. If you’re a skier or snowboarder you probably already have an idea of how steep is steep. A typical “black diamond” ski run is in the low 30 to mid 30s. The “double black diamond” runs can be upper 30s to lower 40s. But in general we’re pretty poor at judging slope angles, so use an inclinometer. When eyeballing a slope, the difference between 32 and 37 degrees is subtle and imperceptible to most folks. However, to the avalanche a five-degree change is huge.

When the snow is wet (from rain or thaw), liquid water melts the bonds and avalanches can occur on less-steep slopes, even on slopes less than 20 degrees. In the arctic, fast arriving springtime conditions may turn a snowpack to slush, and slush-flow avalanches have been observed releasing on slopes as shallow as 10 degrees.

Looking at the slope’s shape

The shape of the slope—whether it’s a narrow couloir, multiple gullies, a broad open slope, funnel-shaped, or an hourglass-shaped slope, and whether it runs out gradually or ends abruptly—highlights the potential consequences of an avalanche.

A gully will confine and accelerate the flow. A funnel-shaped slope means even a shallow avalanche may involve a huge volume of snow. If a slope runs out onto a gradual incline the debris will spread out as it stops. However, a slope that ends abruptly into a creek, crevasse or onto a road will cause even a small avalanche to pile up deep.

Ask yourself, “What will the avalanche be like when it releases and where will it and I go?” If you don’t want to be in that avalanche, go somewhere else.

While an avalanche needs a steep slope to slide down, sometimes avalanches can be triggered from a gentle slope. During periods of unstable snow conditions it can be possible to trigger an avalanche from shallow slopes and flat terrain at the bottom of steep slopes. This is especially true in the “snow climate” of the Rocky Mountains. When snow collapses suddenly under a skier or snowshoer – often with an audible “whumpf” sound – fractures may propagate long distances and release an avalanche from above. These “remote triggers” are akin to pulling the log out from the bottom of the woodpile, which sends the woodpile crashing down.

Slope angle only determines if a slope is indeed steep enough to avalanche, but as you can see, there are some other things to consider about avalanche terrain.

Trees or specifically the lack of trees are great indicators of large avalanche paths. Broken trees and “flag trees” with branches busted off their uphill sides are signs of past avalanches. The vegetation pattern shows only that avalanches have occurred in the past; it tells nothing about the danger today or in the future.

Trees and rocks – anchors or obstacles?

Some people think trees and rocks can help anchor the snow. Intuitively it makes some sense that trees and large boulders would anchor the snow, but in practice they often don’t. The only thing that decides if an avalanche will travel is the slope’s steepness. And the structure of the snowpack will decide if the snow fractures.

Tight trees, actually very tight trees can be anchors. There is an old adage that forested, steep slopes are only safe if the trees are too close to ski (make turns) through.

Some people believe there is no avalanche danger until the big rocks and boulders are covered up. This may be true in the heavy, dense snows of maritime areas. However, in areas of shallow, weak, sugar-like snow, the snow only needs to fill up the areas between the obstacles to cause avalanche problems.

While trees and rocks might help hold back the snow, avalanches do flow easily around and over them turning so-called anchors into deadly battering rams. Avalanches travel fast, as fast as speeding cars and can sweep you into obstacles with the same forces.

When it comes to avalanche terrain I have three thoughts: First, slope angle is key to revealing if an avalanche will run down the hill or mountainside when the conditions are unstable. Unlike the other factors of avalanches — weather, snowpack, and people — the terrain doesn’t change, and slopes of 30–45 degrees produce the most avalanches. Unfortunately those are the same slope angles that are the most fun for skiers, snowboarders, climbers and snowmobiles. With modern snowshoes even snowshoers can travel up these slopes. So get an inclinometer and start measuring slopes angles.

My second point is to think about consequences. If you don’t like where an avalanche will take you and what might happen to you, don’t go out onto that slope. Pick another one, preferably less steep.

Lastly, recognizing avalanche terrain when the snow is unstable is the key to being able to be out in the mountains all the time and coming back home at the end of the day. Good knowledge and smart travel skills are always better than superior rescue skills, but even avalanches don’t care about how smart and how good we are.

Interested in honing your knowledge? Check out our ‘Strengthening Your Pre-Season Backcountry Brain’ post for advice on how to prepare for a safe trip.

Dale Atkins is an internationally known avalanche professional and mountain rescue expert. He’s past president of the American Avalanche Association and is active in the International Commission for Alpine Rescue. His day job is with RECCO AB.