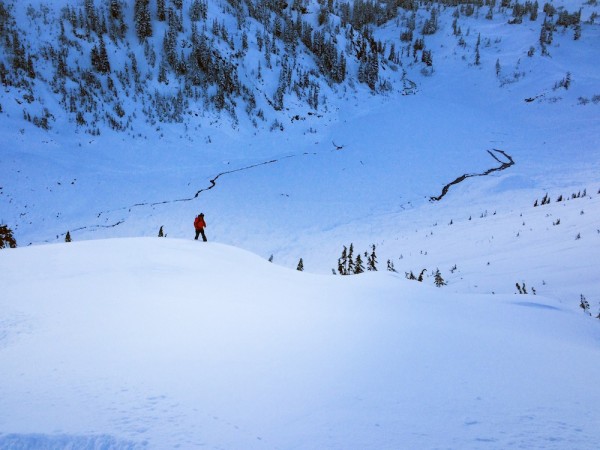 After a couple of hours behind the wheel just before dawn, I arrived at the home of Jeff Hambelton, a professional observer for the Northwest Avalanche Center. My goal for the day was to tag along with Jeff, and experience a typical day of observation from start to finish. I wanted to know more about Jeff and his work with Washington state’s Northwest Avalanche Center (NWAC), but also what he’s thinking about when he is out, and how he translates his findings back to the Avalanche Center.

Over a cup of coffee Jeff walked me through his pre-departure routine. We first checked the day’s avalanche and weather forecast. With this information, we logged into an online portal for NWAC observers, where Jeff gives NWAC an account of where he plans to go and for how long. There is also an entire section devoted to inputting the current avalanche and weather conditions. This gets the observer’s mental wheels spinning and helps him anticipate current hazards, form a travel plan to manage risk, and prepares him with an outline for targeted observations.

Our plan was to spend the majority of the day skiing and observing in the Mt. Baker area, in northwestern Washington. It was the first high pressure, sunny day after a storm had dumped over a foot of new snow in the mountains. Jeff wanted to see conditions on the southern and western aspects, given that his last day of observation was spent largely on north- and east-facing slopes.

On the drive up to the mountain, I learned more about Jeff.  He’s experienced—riding at and around Mt. Baker ski resort for the last 18 years. He’s worked on the ski patrol. And he’s currently the director of the Mountain Education Center at the Mt. Baker Ski Area. He became a professional observer in many ways because he was already doing it. He explains, “During my tenure on the ski patrol, I formed a relationship with the forecasters at the avalanche center based on control work observations. This relationship continued as I became a more active backcountry traveler. Last year we formalized the position of observer, and created the observer network. Now in its second year, I sometimes feel like this job found me.” 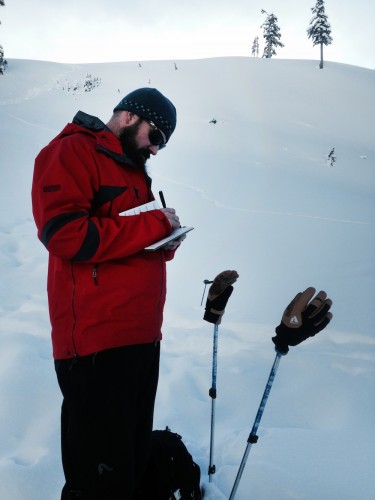 We geared up and set out on the skin track. Jeff started making informal observations immediately, pointing out blowing snow caused by what looked to be strong wind on ridge lines and peaks high above us. After 10 minutes we stopped to shed a layer and Jeff took a set of weather observations, noting them and comparing the measurements to the forecast. Things were lining up—a good sign.

As the morning progressed, we mixed a typical day of backcountry skiing with moments of more detailed observation. Jeff’s ability to notice small but critical details as he traveled was impressive and speaks to his years of experience looking at terrain and snow conditions for clues. And he synthesized his ideas out loud so I could understand. In most places, the 12 inches of new snow was still holding cold and solid and unaffected by wind, except that close to ridge lines, where we saw lots of scouring on windward slopes and slabs forming on the leeward aspects.

We skied one short heavily treed shot that was sheltered from winds and well anchored. The snow was perfect. Transitioning again we made our way up our next objective—a more exposed open slope. Maybe two thirds of the way up Jeff suggested digging a pit. 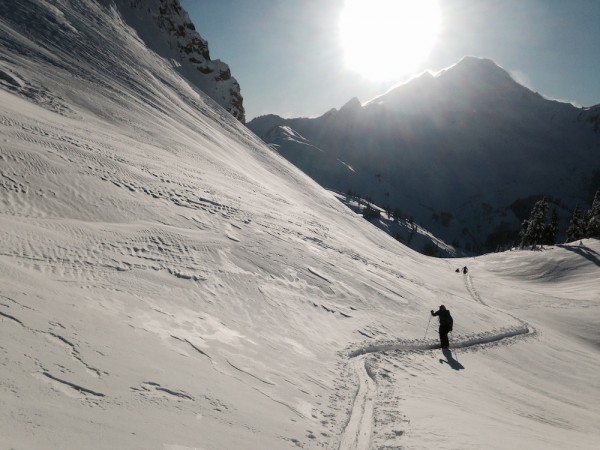 Jeff setup the pit with the ease of having done it many times before in a safe area next to the open slope. We recorded densities and layers, snowpack depths, temps and did a couple of quick but thorough shovel shear and compression tests. He recorded each finding—in our case nothing too noteworthy. Layers were bonding well and there was little propagation. But we did note that the new layer of snow hadn’t settled much, which meant that if wind was blown in a deep slab on top, there was a risk of this weak new layer of snow collapsing. 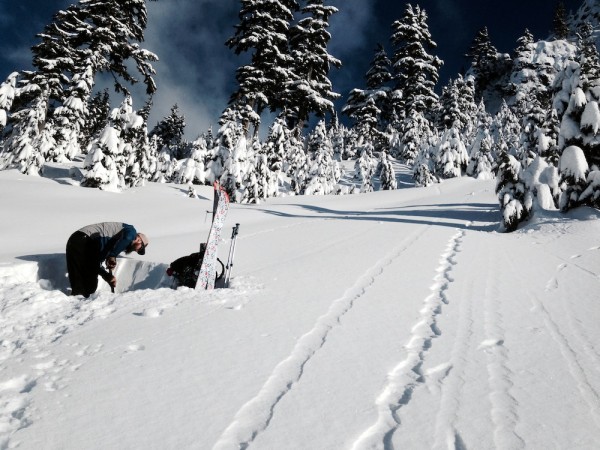 I asked Jeff about where and when he chooses to dig snow pits and taking detailed readings. He explained that the number many slopes he chooses to look at depends on the day. He explained that, “One of the more challenging aspects of my day can be balancing speed and spatial variability—seeing a lot of terrain but also being thorough in analysis.” He spoke to how often the conditions can vary from one zone to the next, emphasizing the importance of keeping the bigger picture in mind throughout the day. 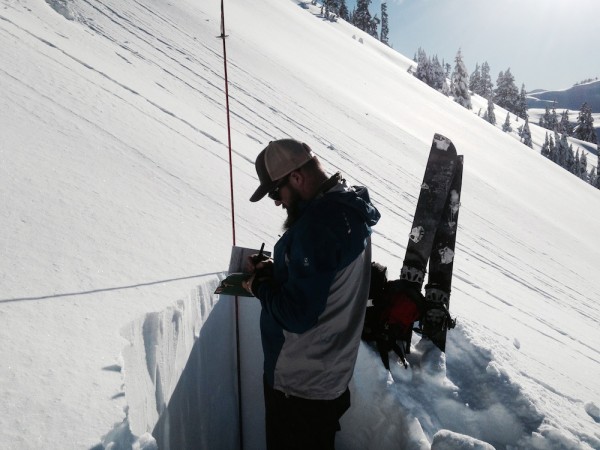 We skied this next slope of perfect snow and transitioned again, moving toward one final long run to the car. Even as we wrapped up the day, Jeff seemed to always be looking for more clues. As we neared the parking lot, he looked around one last time and said, “Yep, wind was the story of the day.” Wind was the main element that was creating an avalanche hazard—something he’d want to emphasize in his report back to the Avalanche Center.

We alerted NWAC via email that we were back and safe when we got to the car. Jeff explained that he’d send them more information through an online form like the one he filled out in the morning. At his home, we filled out this form, entering recorded temperatures, the data from the snow profile and tests, and any noteworthy visible observations.

In short, a professional observer’s role is to get out and move through terrain, keeping careful track of signs that indicate avalanche hazard, and knowing when to stop and take a closer look. A network of observers, like that of NWAC, adds to the wealth of information an avalanche center relies on to create better forecasts and keep more people safe.

Kate Hourihan grew up outside Boston, Massachusetts and began her migration westward after college in 2007. She spent five years in Utah, initially as a ski bum in the Wasatch Mountains and eventually as a professional telemark skier. She currently lives in Seattle and hopes to balance a career as a writer and graphic designer with skiing, climbing and exploring the Cascades as much as she can.