Climbing has this ability of showing us what is really going on inside of us, of bringing our ego to the light, and that’s often painful.

Standing at the bottom of the wall, I was realizing this. Realizing I had not really faced this type of challenge as directly and bravely as I thought I had in the past. I had, in fact, avoided the harder routes whenever I was not convinced deep inside that I would succeed.

As a climber, I always wanted to put my finger on “Tough Enough” in Madagascar. These kind of hard routes are the stuff of both my dreams and nightmares: amazing lines where unshakable doubt constantly brings the possibility of failure. I fear failure. I never quite had the guts to go there, but this spring, life just brought it to me, in the form of Mélissa Le Nevé. She spent 5 weeks on it last summer and was looking for a partner. Melissa and I share an old and deep friendship, almost like a lover’s tale. She was the one who belayed and supported me in my first multi-pitch “Ultime Demence” in Verdon. She also showed me the way to the French happy-and-a-tad-crazy way of life. She is also whom I fight the most and best with. We both have pretty strong characters. But in Tough Enough, it’s a critical asset. 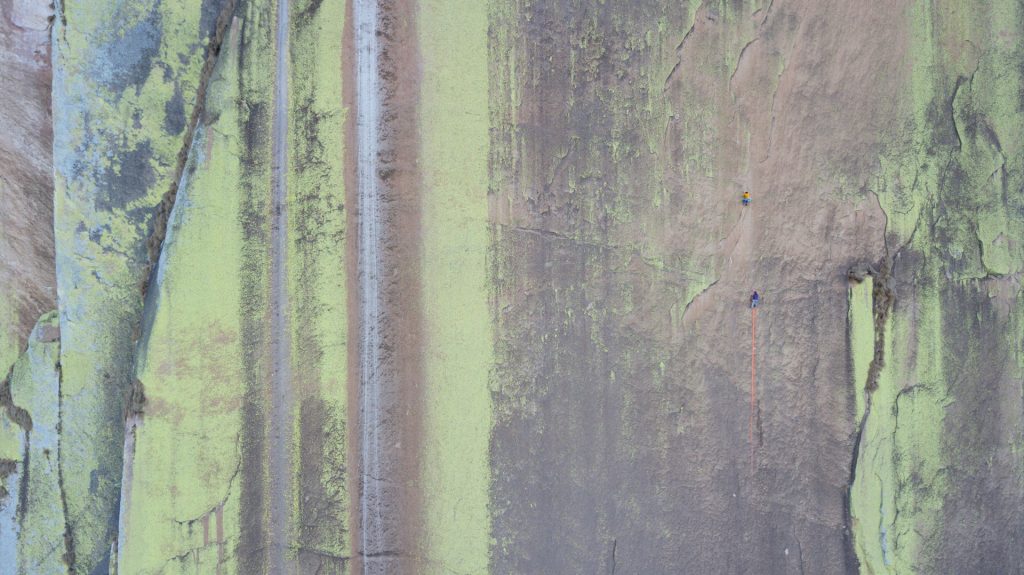 It took us quite a bit more than planned to get to Antananarivo (28 hours waiting to take off with Air Madagascar, a.k.a. Maybe Air). Upon landing for the first time in an African country, I found myself confronted with a new experience: I was different just because of my skin color. This uneasy feeling struck me and established an invisible barrier between the locals and us. My spirits were deeply affected and I ended up having a melt-down 10 days into our trip. 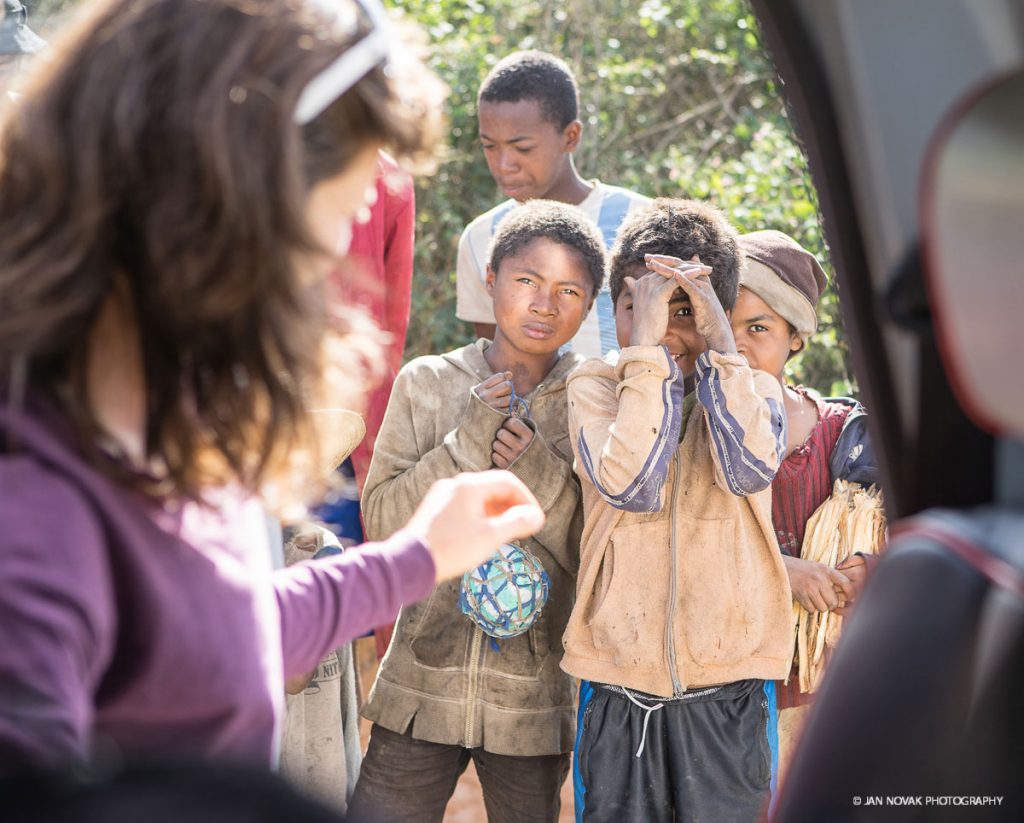 It was on a hot afternoon, 400 meters above the ground, right in the middle of the 9th pitch , an 8b+ called “Gecko.” On the previous days, I had been moving a lot on the wall, shuffling quite a bit of rope, and a deep feeling of exhaustion was overtaking me. Of course, one expects climbing in such a hard route to be very tiring, but all these unsettling emotions had been making quite a mess inside of my head. But how did we get there? 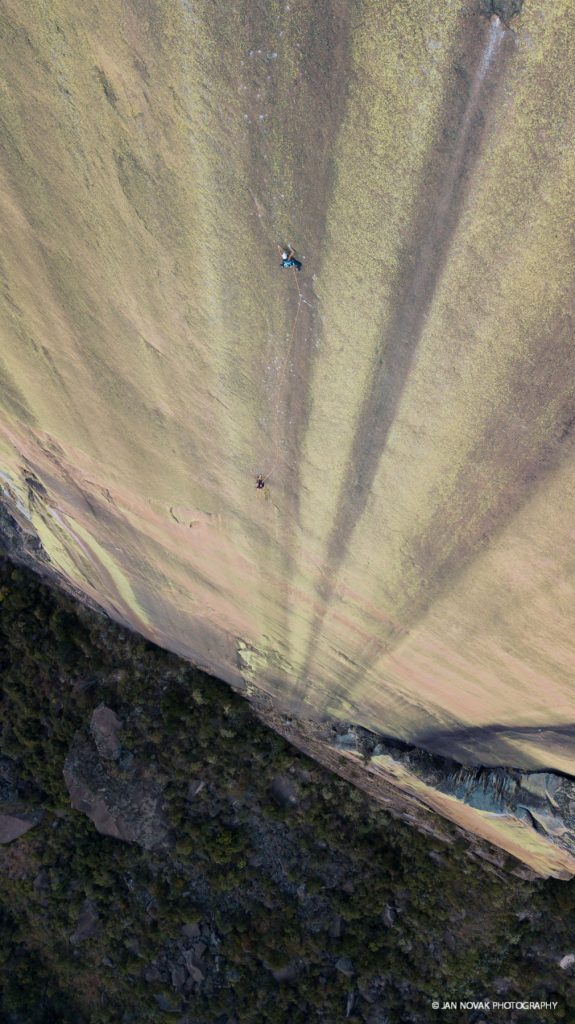 After our arrival in the capital, it had taken a day of travel by bus. Fortunately, the company of our photographer, Jan Novak, was making our trip much easier, as he had spent two years in the country.

Overly excited and eager to climb, Mél also showed me the first part of the route from the bottom. I was able to lead the first six pitches and very much enjoyed the feeling of climbing up such a rarely visited route with no chalk marks whatsoever to guide you. I found these pitches really difficult, but once I got used to grabbing these tiny holds, often with the thumb, and started to trust my foot placement, I started to grow confident that I would soon send them. 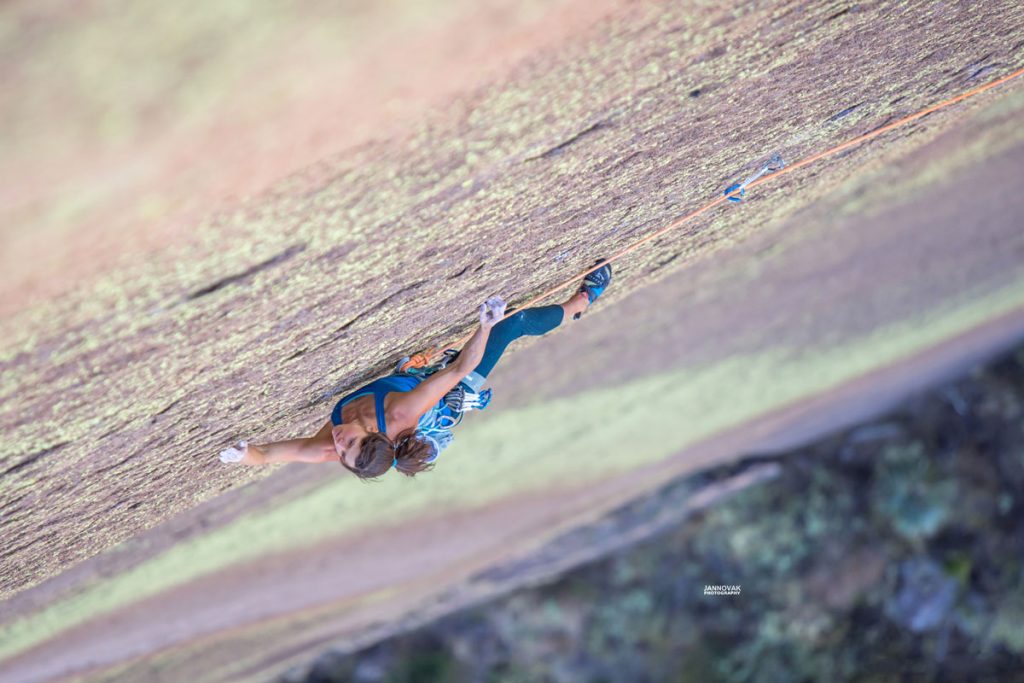 In order to be able to work on the last 4 pitches, all in the 8b+ range, we hiked around to reach the Karamboni summit, from which you can comfortably drop into the route with static lines. These four lengths are just straight up insane. The first time you lower in, there is just a perfectly smooth wall, no holds anywhere to be seen. Fortunately, Mél could remember well where to look for them. Both equipped with a metal brush, loaded chalk bags, and a few Faza brushes, we went to work to increase ever so slightly the chances of us making any progress up.

The style is quite unique and atypical…hips glued to the wall to try and stay on holds that maybe don’t exist…the edge of our climbing shoes as sharp as we could make them …and every move a slow and subtle shift in balance. Usually, I do fairly well in these kinds of lines, but I had to accept very quickly that even so, this was not something where much could be achieved in a mere three weeks. As a result, I started tensing up, questioning the decision of travelling here. Getting stuck on a wall, with no visible progress to keep hope alive, is always a frustrating experience. 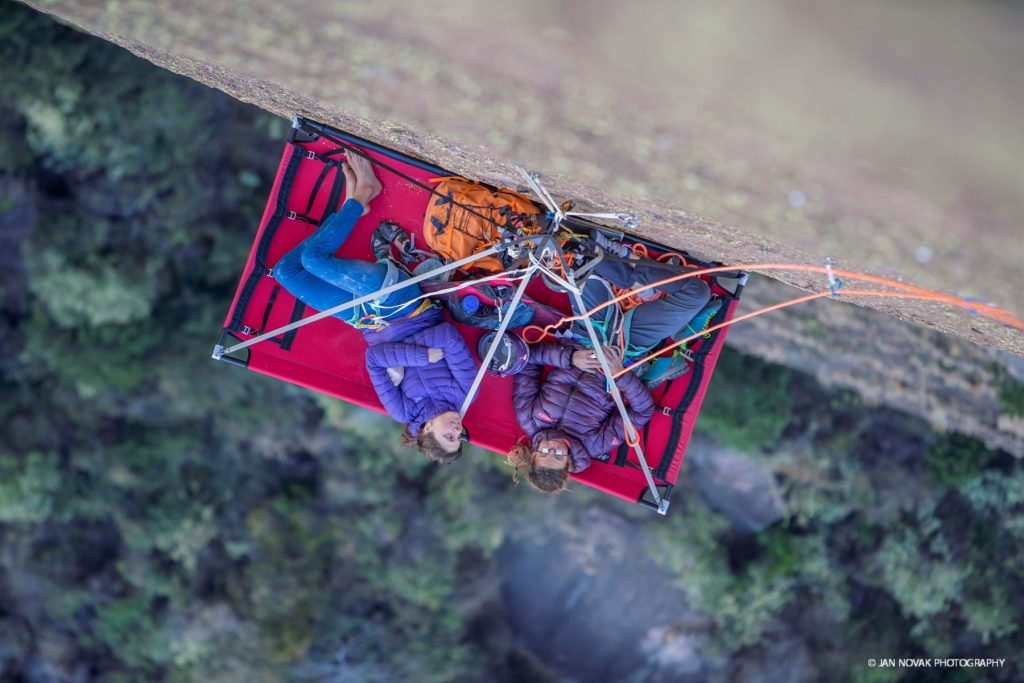 And that leads us to the famous fuse blowing Nina Caprice-style…I just lost it and let out all my frustration and built up unease. Mél was unfortunate to be the only possible target for my outburst of negative energy, a strange mix of climber frustration, disappointment after a promising lower section, anger, and the upsetting experience of seeing the behavior of tourists with locals. Centuries of slavery and racism have left a deep scar in the relationship between locals and the white visitors who most often fail to overcome their prejudice and get on a balanced and equal footing. 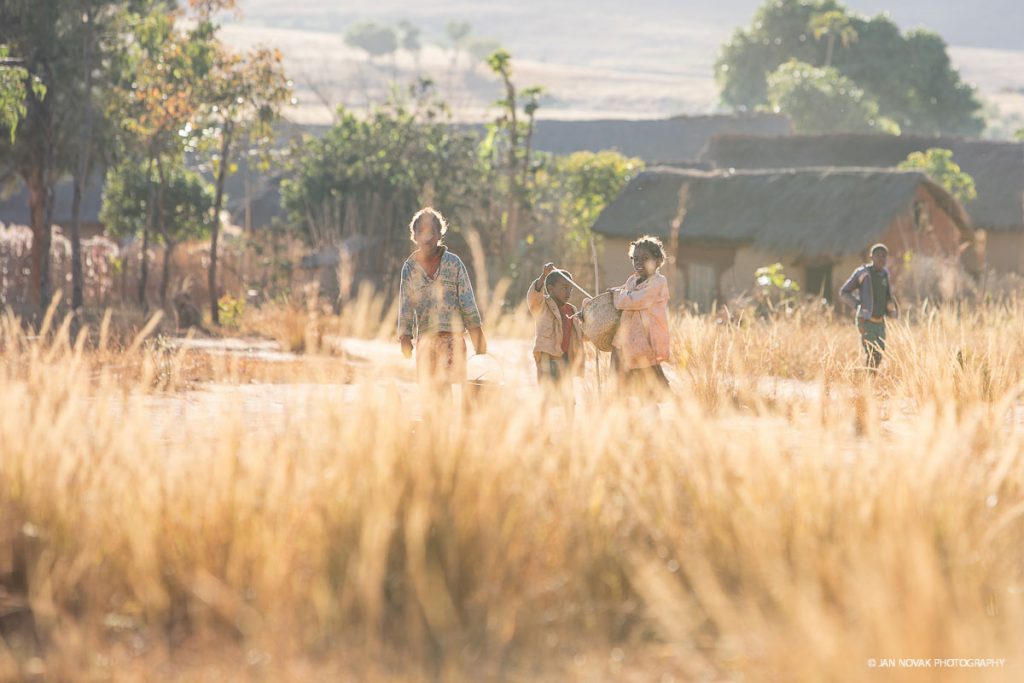 Melissa reacted really well. Instead of returning to sender and hitting back, she just let me spill it, looked at me with kindness, happy to see me finally let go a bit. Thinking back about it cracks me up quite a bit: Melissa l’Enervée (*French pun on Melissa Le Nevé sounding like the Wiry Mél) and Nina Caprice lost in the Middle of Nowhere, Madagascar, making a scene in the middle of one of the largest and most beautiful rock faces in the world, cameleons and lemurs running for cover. 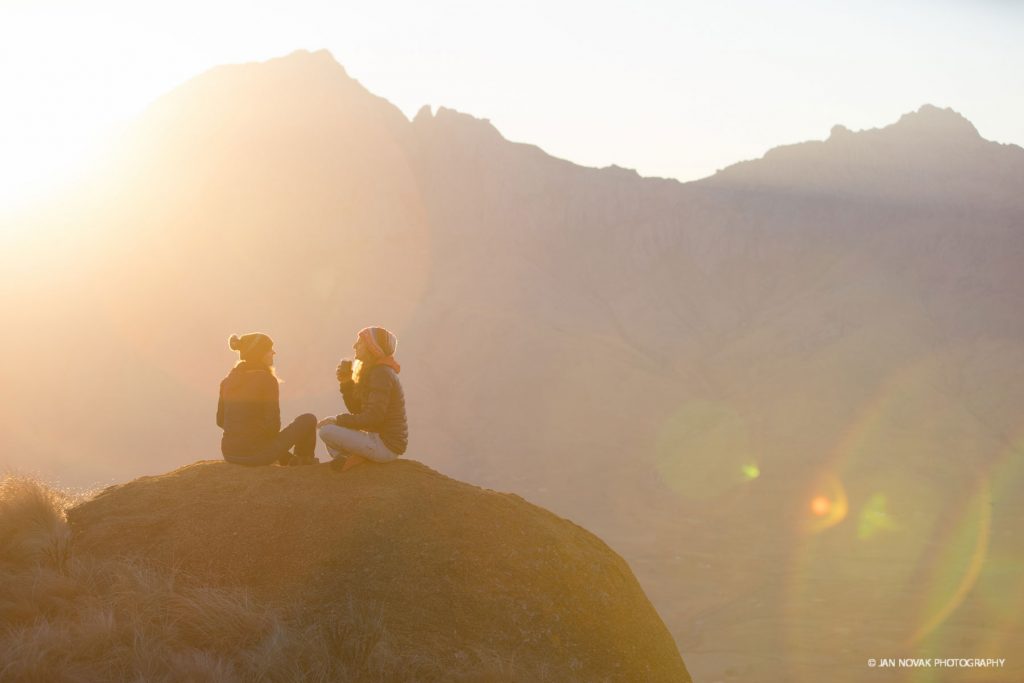 After that, we were finally able to truly live and enjoy our stay. I no longer saw the climbing as a failure, quite the opposite. Every meter climbed was a success. Little by little, a move at a time, we were able to decipher the pitches, sharing and enjoying the hard climbing. We sent a few pitches, got pretty close on others, but several are still way out of our reach.

Putting one’s fingers on such a route is a way to meet one’s self again, to get to know ones climbing partner deeper and better, and of course to experience a new place. It was the first time climbing in Africa and the experience was anything but benign.

Grasping these ten hard pitches, each with it’s own character, is a little bit like grasping relationships with other people: it’s a game of balance that can only be learned a step at a time. In the end, it’s by having an open mind and lowering our mental guard that we can begin to feel at ease in our own skin. It requires discovering and welcoming new cultures, new ways of human lives. The time it took for me to accept the route’s extreme difficulty, was similar to the time it took for me to find my place there.

After three weeks at Catta camp, the Malagasy who work there where becoming our friends. When we left, they told us they had appreciated our open attitude and willingness to understand and share a bit of their lifestyles. They don’t always experience it with passing visitors who often would rather remain at a distance as observers.

To travel to this remote place with its red ground and challenge one of the hardest routes in the world feels like the start and growth of a relationship, and it is fitting to have done it with my dear friend Mélissa.