Last year, Brandon Sharpe made the pilgrimage up the west coast’s Pacific Crest Trail, through 14,000 feet of elevation, 25 national forests, and 7 national parks. His incredible photos showcase many of the trail’s iconic views, and they continue our series: “Thru the Lens: Photo Journeys of the Major Thru-Hikes.” 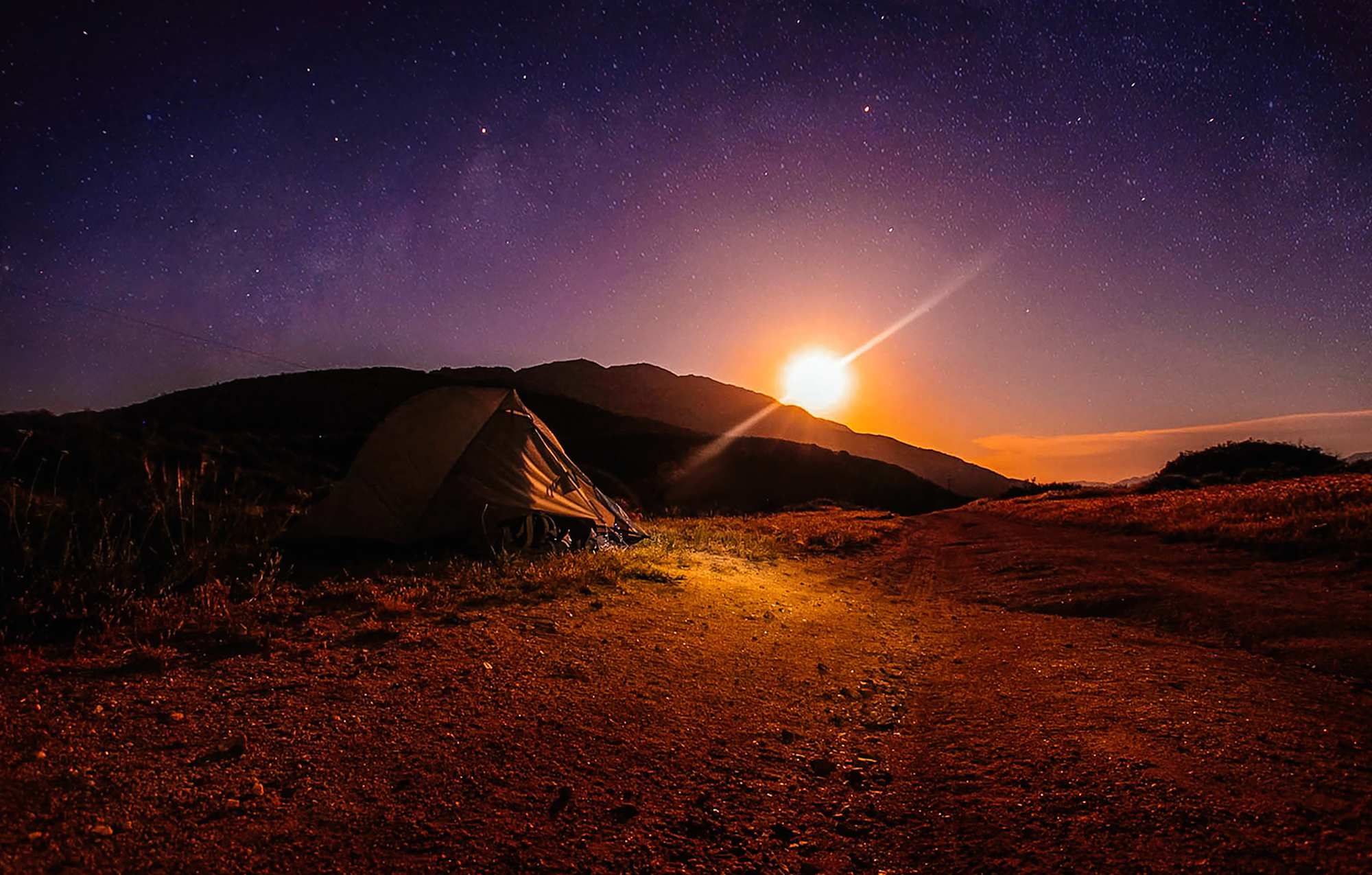 About 45 miles north of the start of the PCT at the U.S.-Mexico border sits the hamlet of Mt. Laguna, a small cluster of establishments comprising a general store, a rustic lodge with cabins, a local restaurant and a rural post office, which cater to PCT hikers. There, I was told that in two nights a lunar eclipse would occur, turning the moon a blood-red orange. Up the trail, two nights later, I set my alarm for midnight. I awoke to the sight of a blood red super moon rising over the horizon. After taking what felt like a million photos, I sat there for a long while and admired this rare sight. 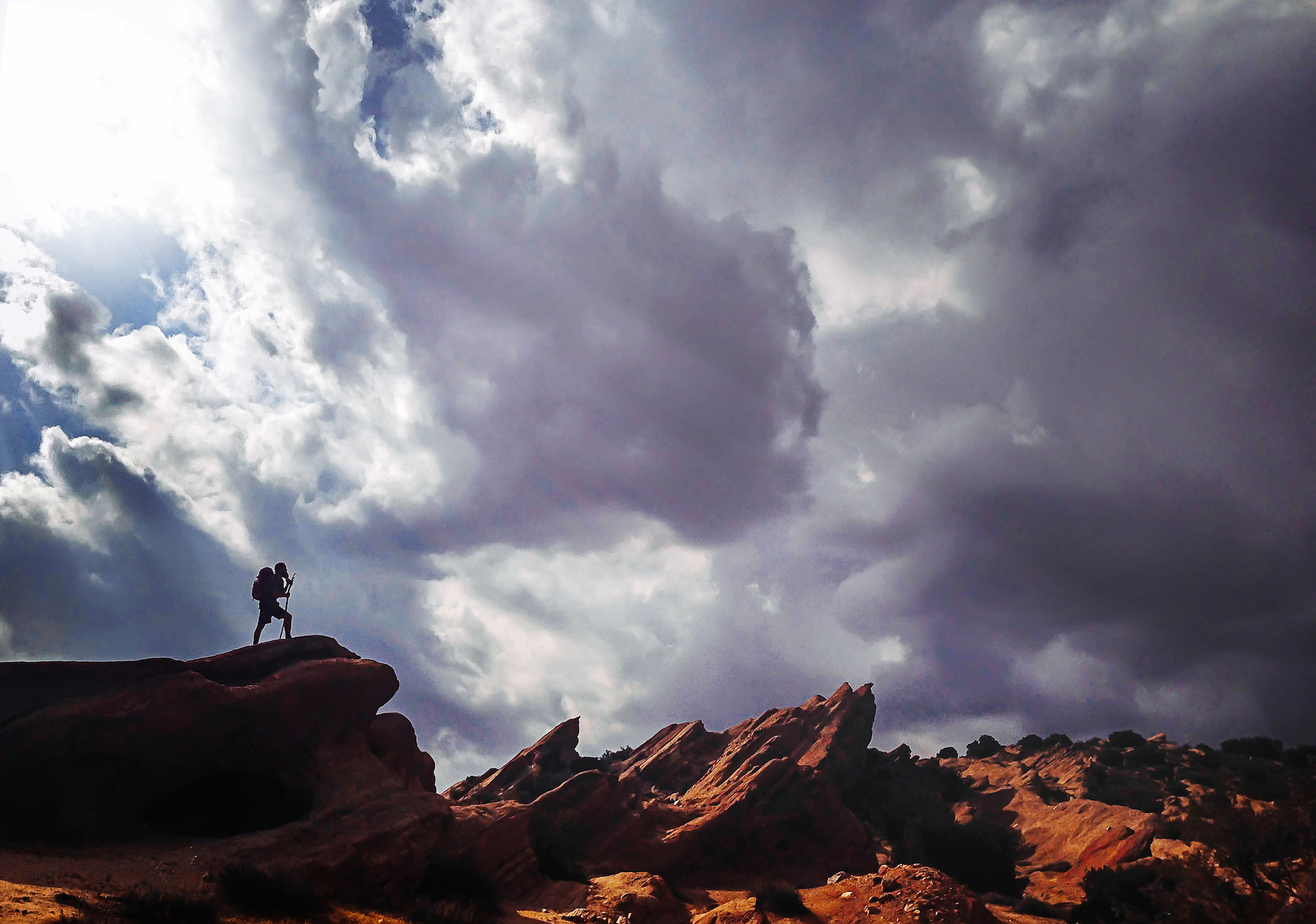 North of Los Angeles, in the Sierra Pelona Mountains, the stunning Vasquez Rocks reveal the rapid uplift and resulting erosion caused by activity along the infamous San Andreas Fault. After struggling through fierce winds, my hiking partner Mark Dubé (a.k.a. Driftwood) and I were greeted by views of these incredible formations beneath a squally sky. Driftwood, a tall man with a wizard-like beard, posed with his staff against the turbulent scene. 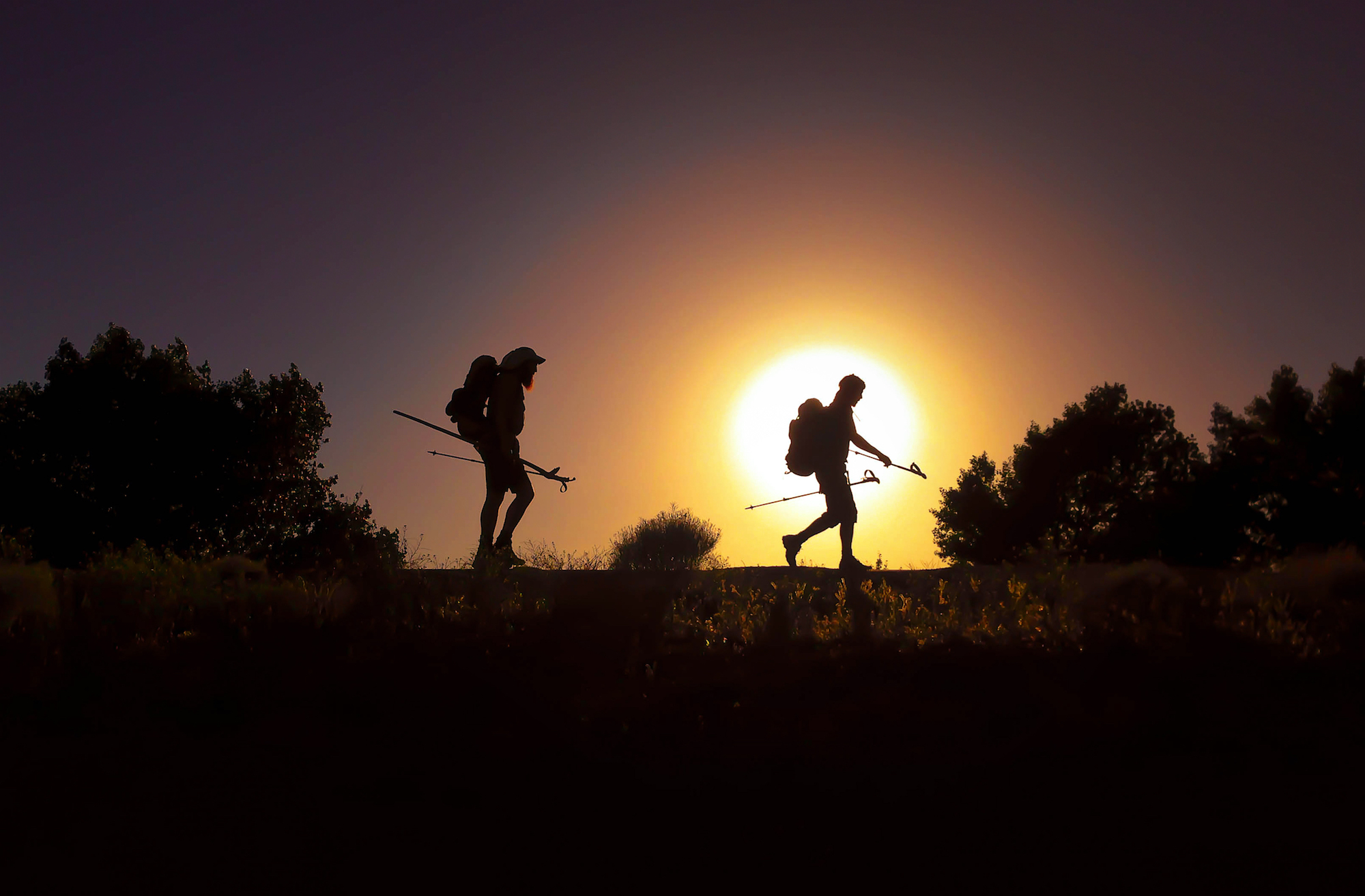 As we started to move closer to the Mojave Desert, we began to get a preview of what we’d experience in the days ahead. The trail took us up and down and around sparse mountains, only to spit us out in dry, hot, and desolate valleys. After we’d cross one waterless stretch of land beneath a scorching sun, we’d climb and descend, only to repeat the same type of hike we’d done the day before, in a kind of rinse and repeat cycle. As we approached our third day of expected desert climbs, we came upon a surprising sight. It was a small cluster of houses called Hiker Town, composed of one house sitting in the center of a plot of land, surrounded by little movie-set type houses. The houses were built to accommodate hikers, and $5 bought you a hot shower. Turns out, the owner of the land that Hiker Town sits on was a movie producer at one point in his life. The Pacific Crest Trail follows the LA Aqueduct for a good bit, weaving in and out of sand embankments and between two sets of mountains. It made for some fun late-afternoon hiking on something other than dirt, and out here every little new thing is a big thing. 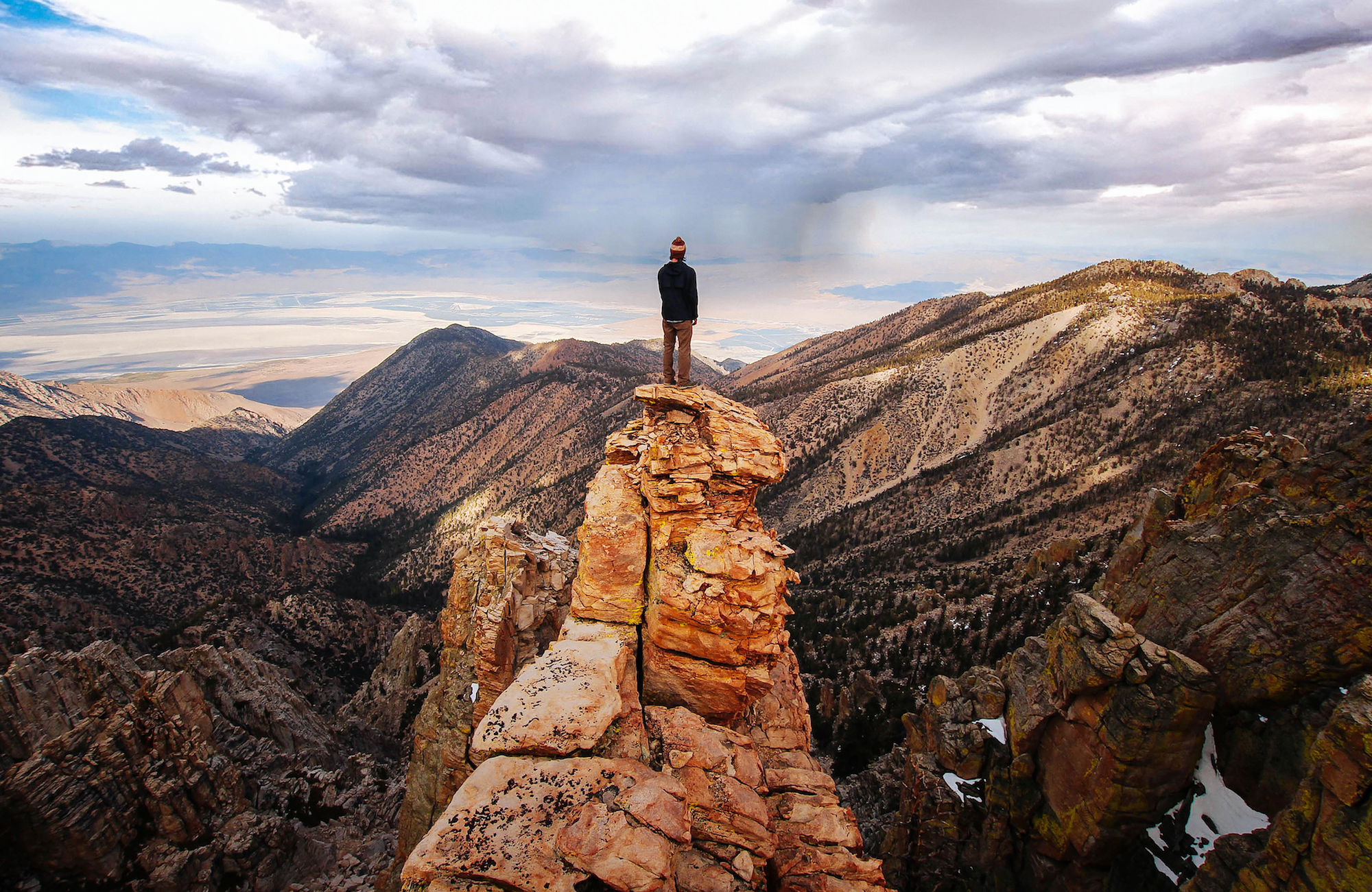 As we headed north towards the High Sierra, we weren’t really sure on what to expect; we were told the desert was over and the real fun was about to begin. It wasn’t that long before we began to witness those testimonies come true. The length of distance you could see looking east was great; the land desolate. 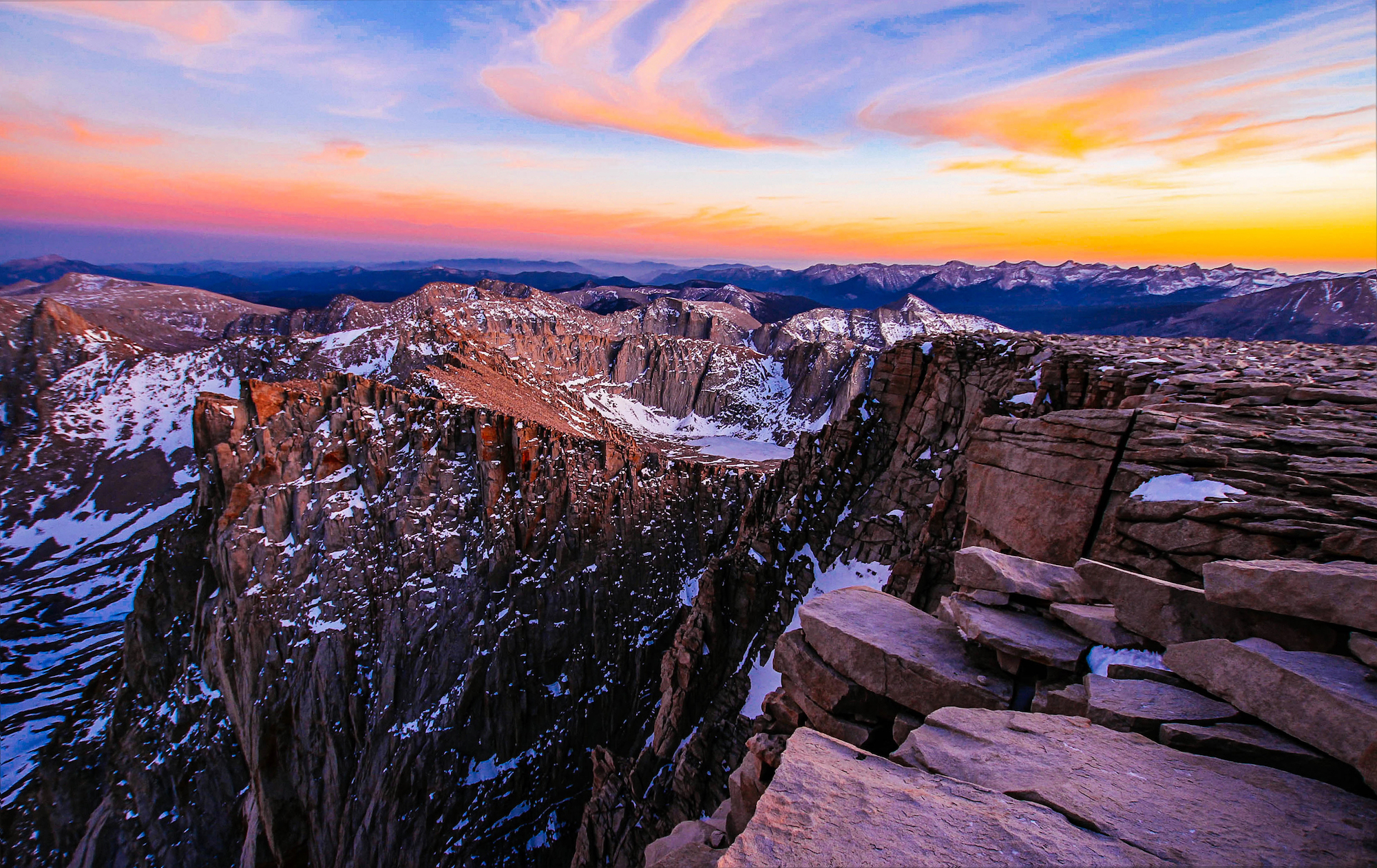 The days leading up to Mt. Whitney had been life-changing to say the least, and filled many first-time experiences. Climbing and summiting the tallest mountain in the lower 48 became one more. The summit tops out at 14,500 feet in elevation. Up there, you can’t help but feel like you’re on top of the world. We decided to spend the night on top of the mountain in its stone hut, known as The Smithsonian Institution Center, built in 1909. I will never forget the sunset and sunrise—worth every bit of discomfort from the cold. 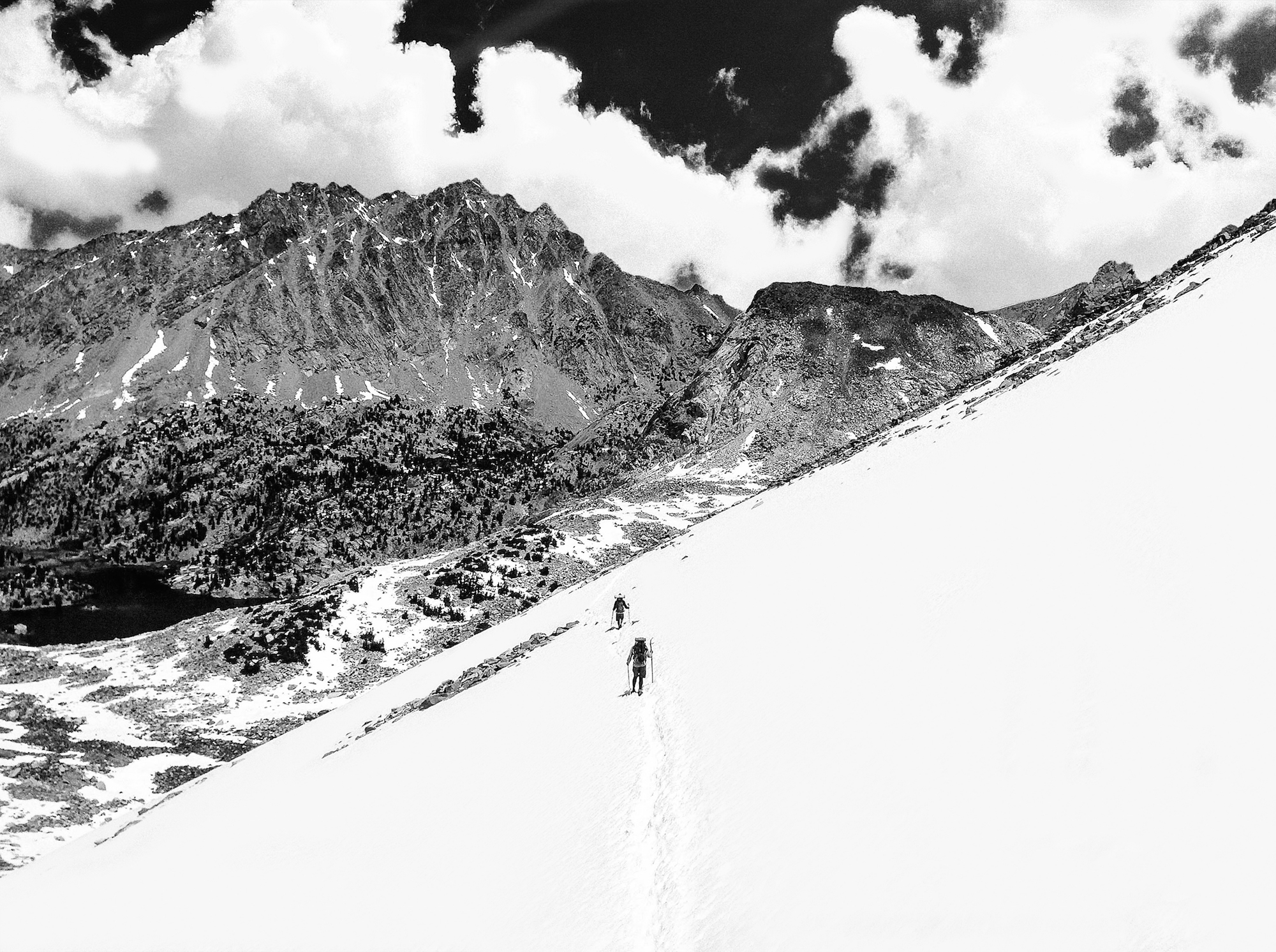 When we crested the saddle of Forester Pass, between Sequoia National Park and Kings Canyon National Park, the landscape was blanketed with snow, showing only vague signs of where previous hikers had trekked since the last storm. As if worrying about sliding off the side the mountain wasn't bad enough, the snow began to soften. At times our feet would post hole through until they reached a rock or stream beneath, which left our feet saturated and cold. We continued on like this for miles before we reached treeline once again and started our journey down through Kings Canyon. 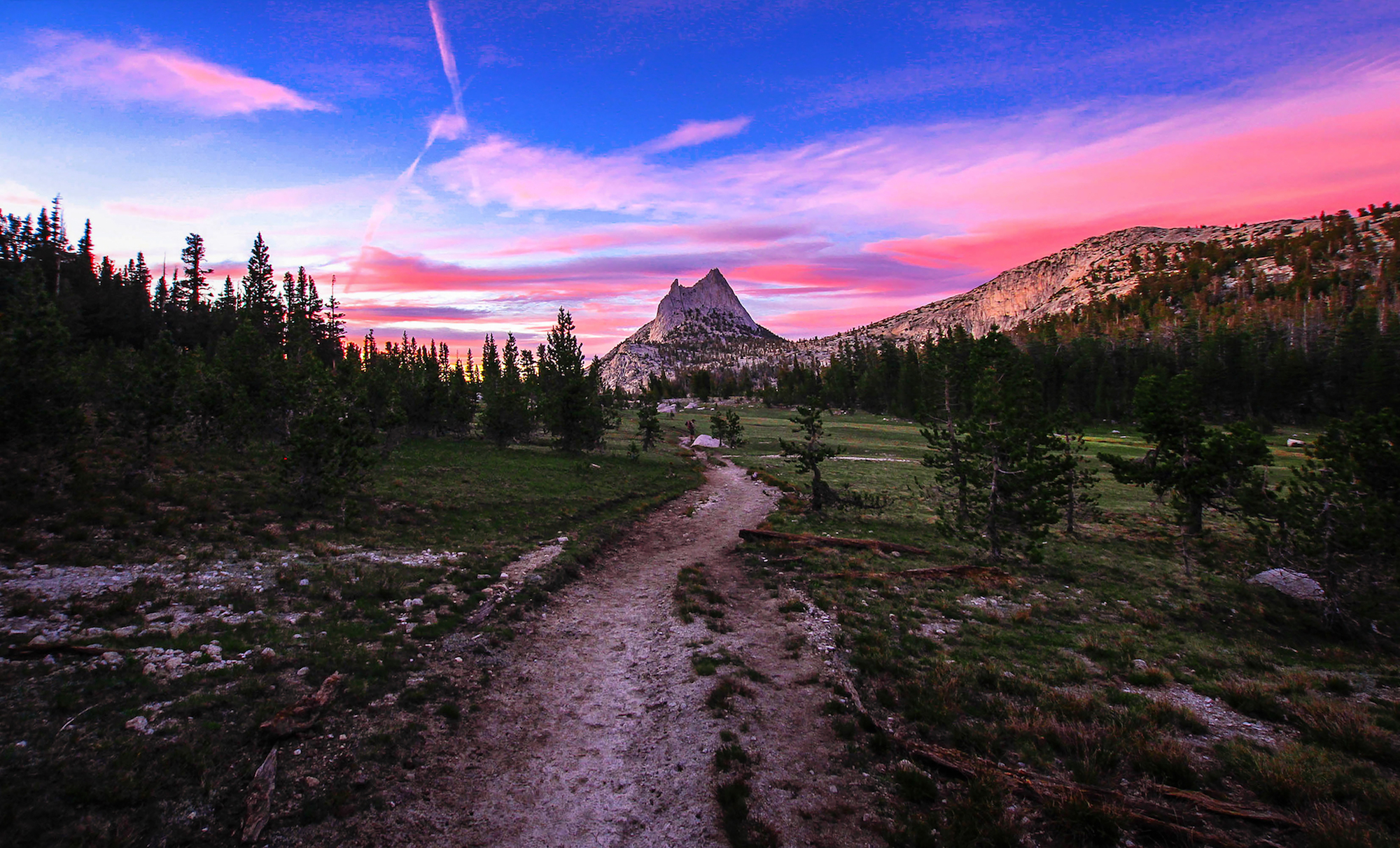 The High Sierras were nothing short of amazing. As we made our way up and down and around the valleys and mountains of the Sierras, I found myself hiking at a much slower pace. It may have been that we were now hiking up and down elevation changes in the 6,000 foot range daily. 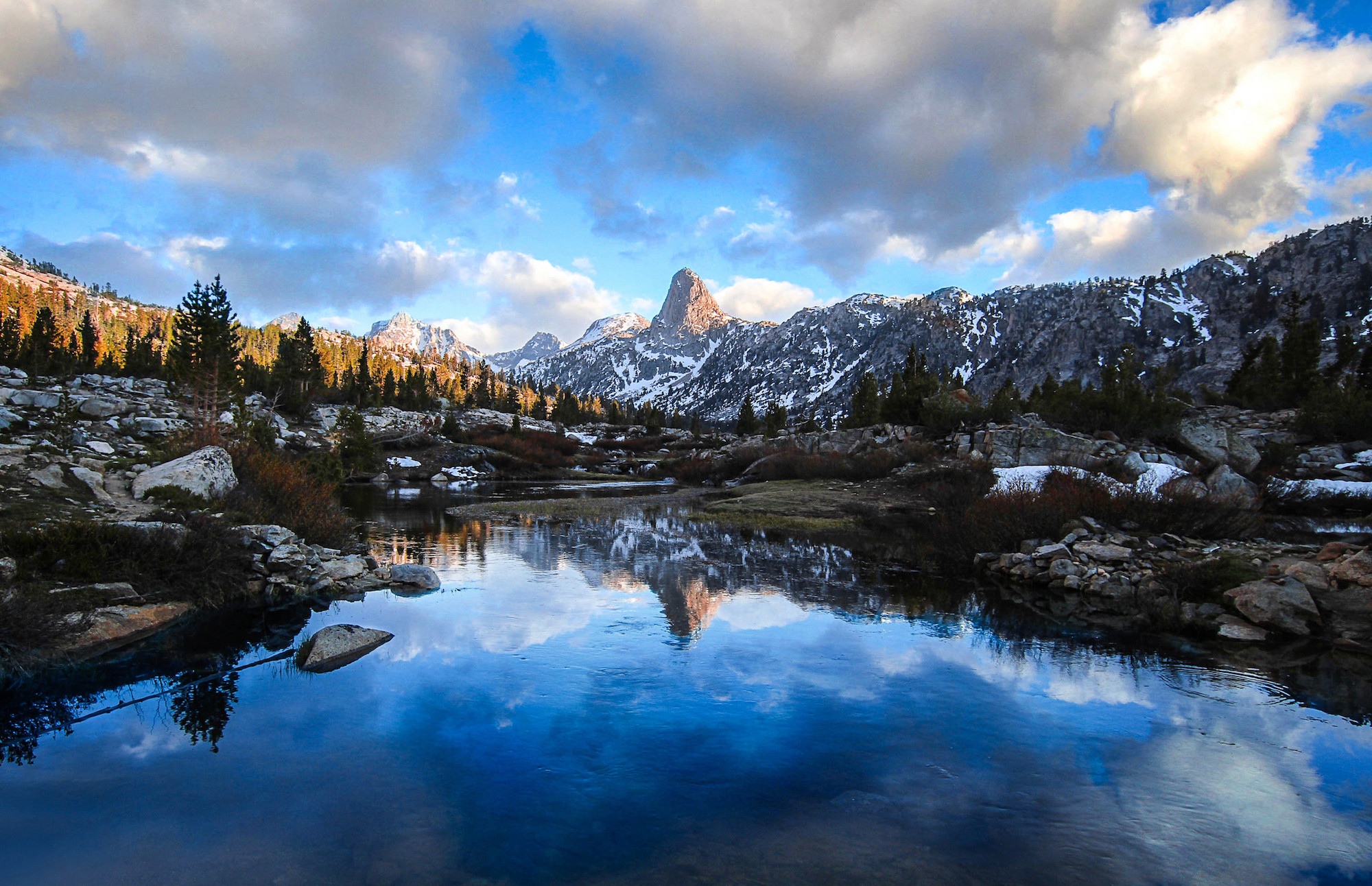 There are some things that will literally stop you in your tracks. This was one of them. Fin Dome is that thin blade of granite on the horizon above Rae Lakes in the SeKi Wilderness. We spent 5 days in beautiful Kings Canyon before hitting the trail en route to Lake Tahoe. 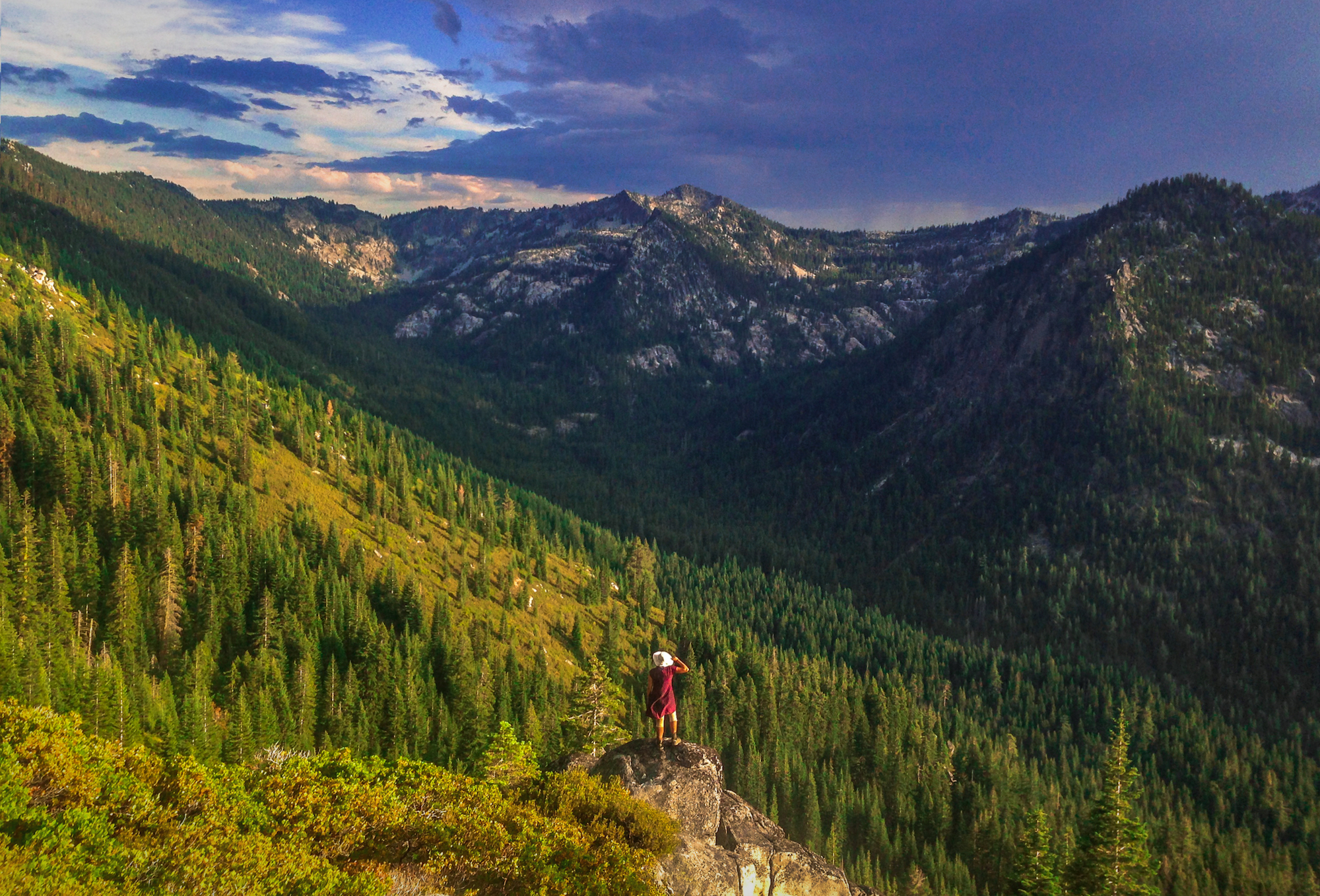 A palette of incredible contrasts and colors, Russian Wilderness is a vast 12,000 acres located northeast of Eureka, California. It’s dominated by cirques and U-shaped valleys carved by ancient glaciers, and made for a beautiful goodbye the Golden State. 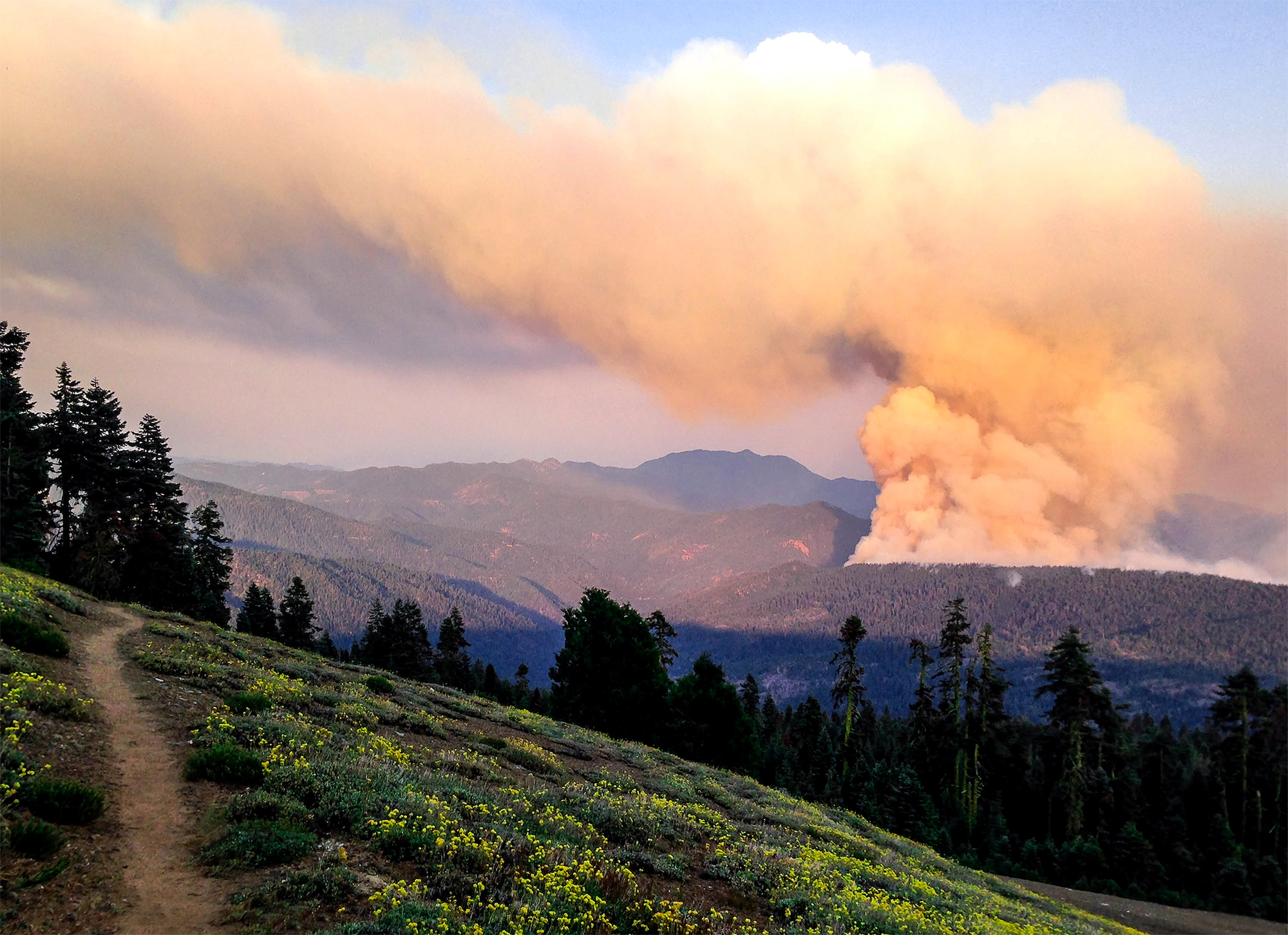 One of the highlights of hiking the Pacific Crest Trail was walking into Oregon—and realizing the overwhelmingly long state of California was over. At the height of the summer, large fires raged in the distance. As we set up camp the night of this photo, everything glowed slightly from the light of fires. The next morning we awoke to a blanket of ash covering us and our gear. The next few days, we made big strides to get out of harm’s way and into Ashland, Oregon. 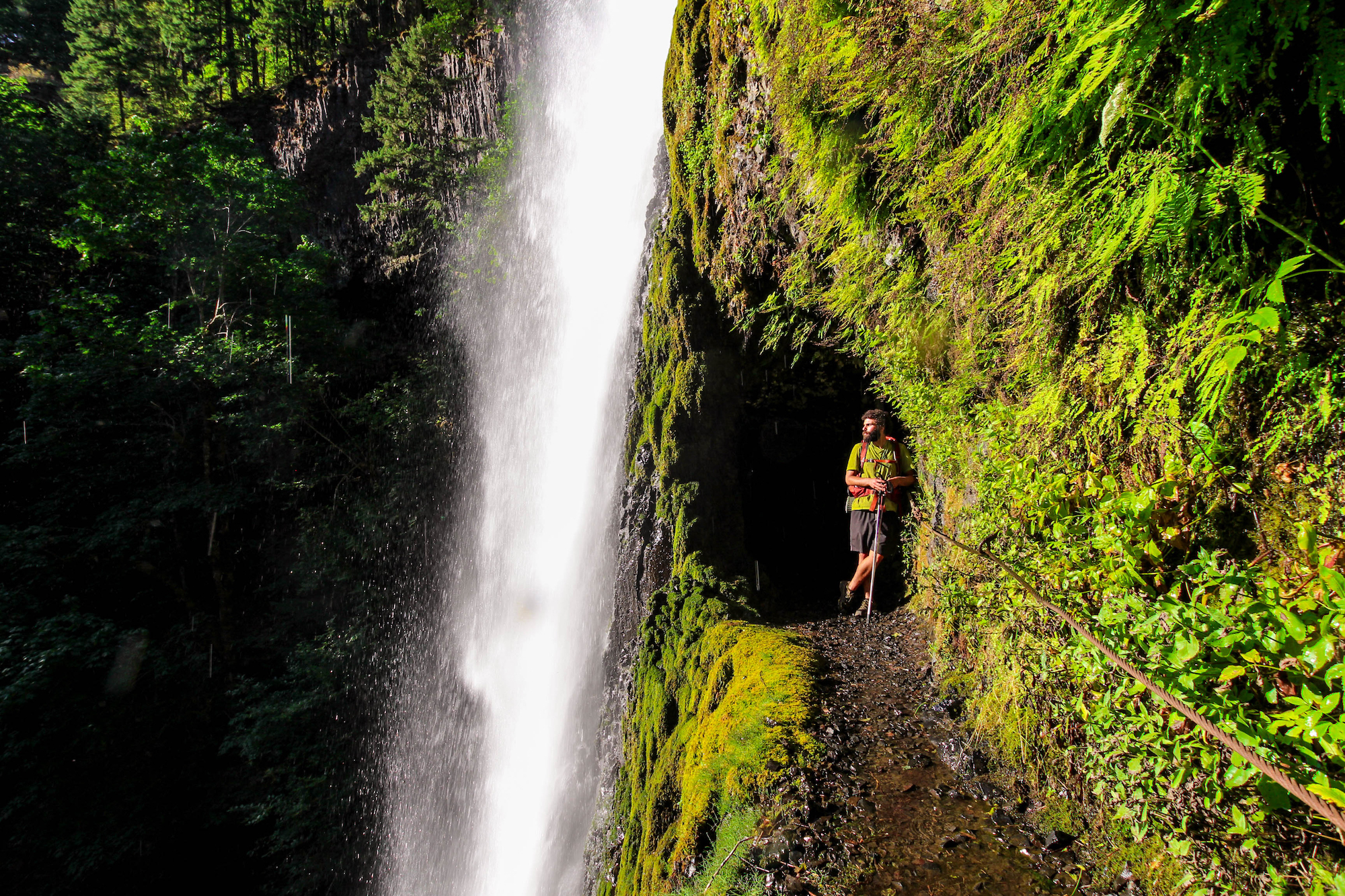 You can witness the wonder of Tunnel Falls in all its beauty on The Eagle Creek Trail in Oregon, near the Columbia River Gorge. This is Smiley from Israel, taking it all in. Smiley became one of my closer friends on this long journey. 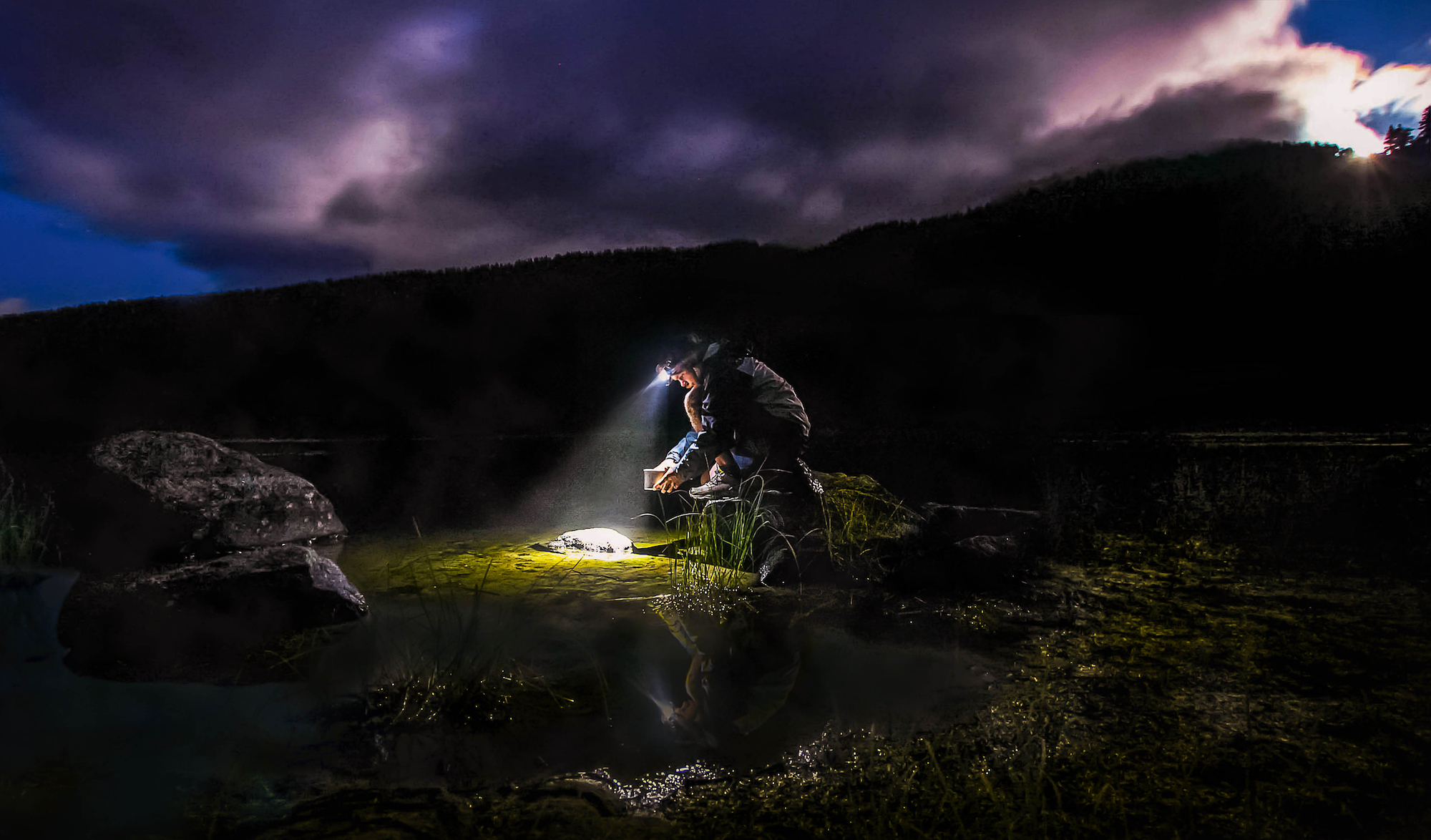 In the Chinook Pass area near Mount Rainier, the trail to Bumping Lake is surrounded by souring old-growth conifers, wetlands, and on the right day, herds of grazing elk. The lake itself is a natural reservoir serving irrigation projects in Yakima County. 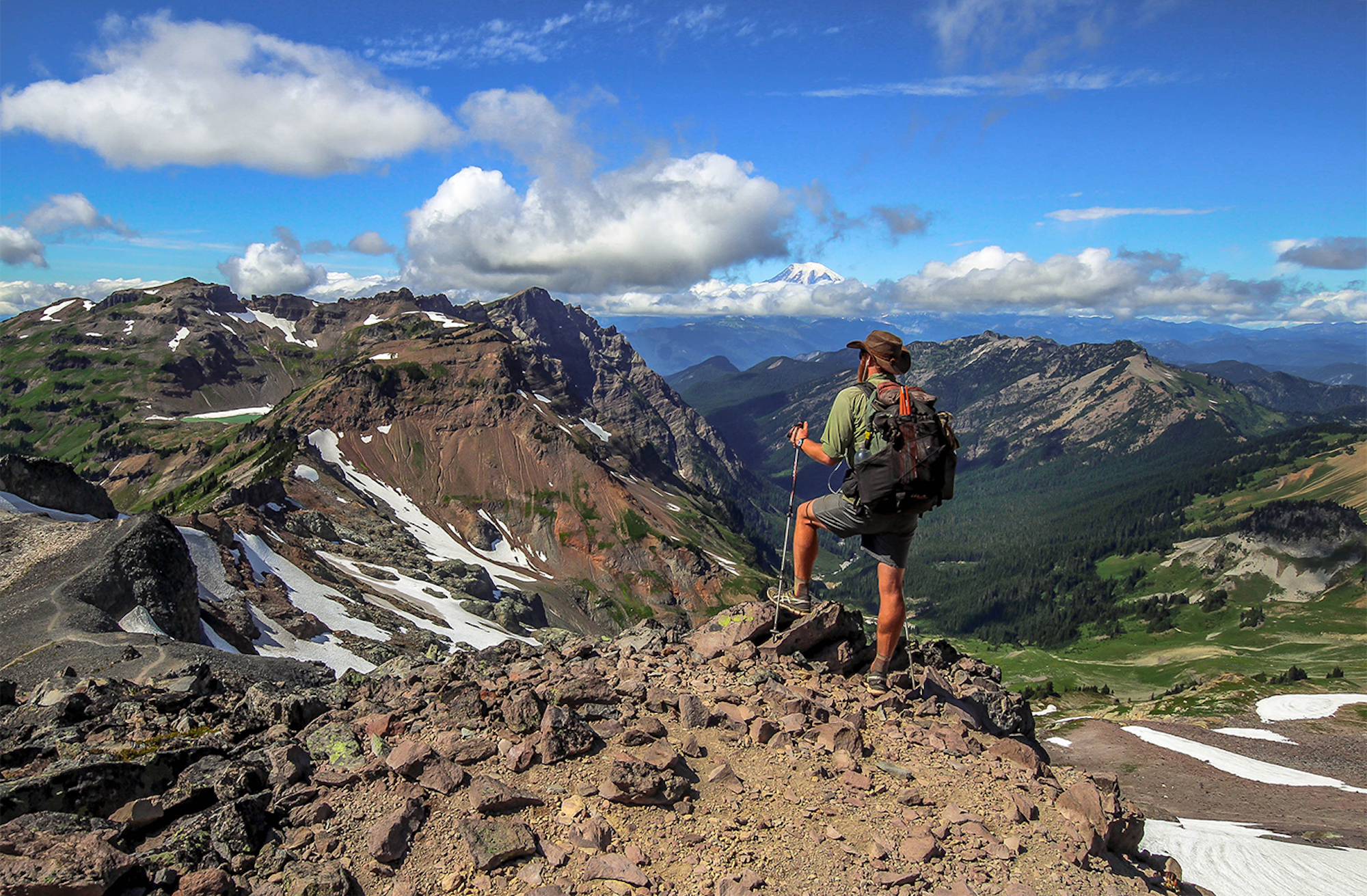 The PCT wends for 31 miles through the striking Goat Rocks Wilderness between Washington’s Mt. Rainier and Mt. Adams volcanoes. Distant mountain goat sightings are common here and the sounds of pikas and marmots offer a constant chorus as you traverse above the timberline and past Old Snowy, a still-glaciated 7,930-foot peak with sunrise bivies built in among its boulder-stacked cone. 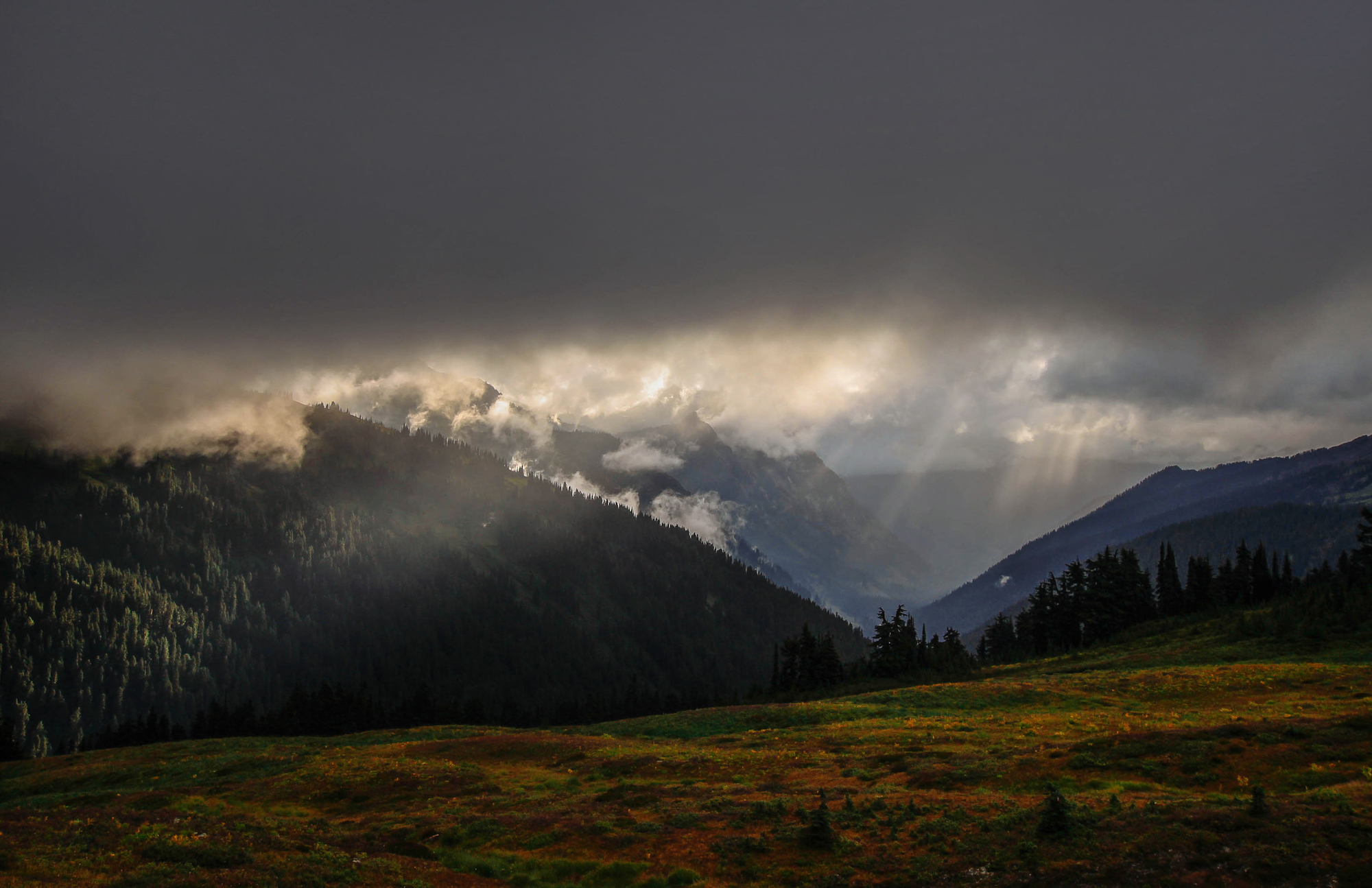 The North Cascades are often called the American Alps for their near vertical peaks and spires rising from the thick forests below. Much of this rugged terrain is preserved in the North Cascades National Park, accessed only by skis or snow machines during the winter, but a playground for all levels of adventure seekers during the summer. 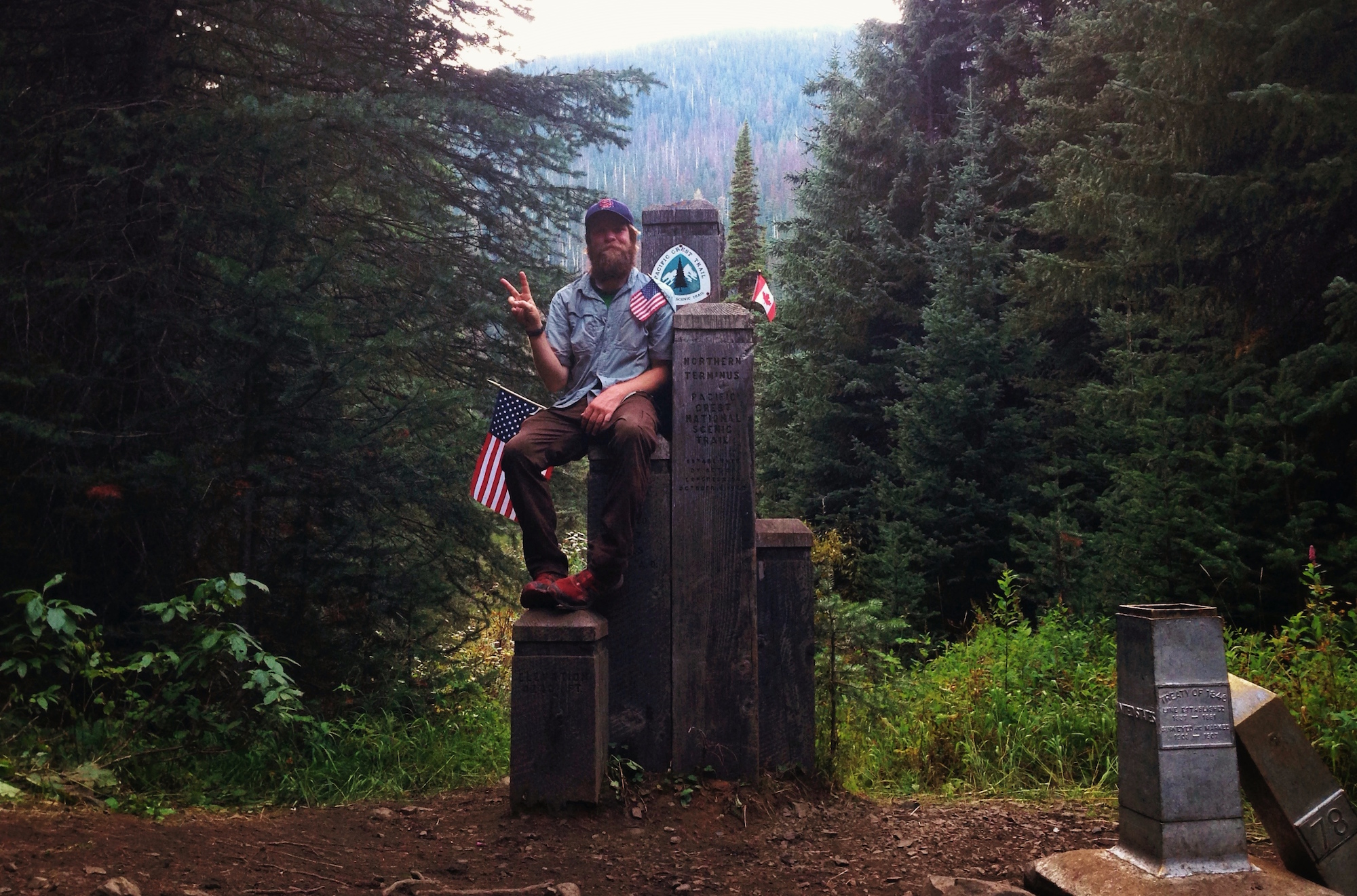 Skirting the eastern slopes of the North Cascades, the PCT finally brought us to the Canadian border and beyond—2,650 miles by foot from where we’d departed. The Pacific Northwest environments were a far cry from the distant deserts of California, but that’s the beauty of the Pacific Crest Trail. It’s a thin line that carries one, step by step, through numerous territories and ecosystems, and past awe-inspiring features that symbolize what is so special about the wild western United States. 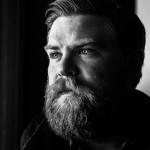 Author: My name is Brandon Sharpe and I am transplant from the south, now living in the great city of Chicago. Thru-Hiked The Pacific Crest Trail 2014. I am a designer by trade and photographer by adventure, and always looking for the next big thing.