The Kagera river flows through Mahama and then continues on as it bends and winds its way through a lush green valley. Although turbid, there is plenty of water in this area of Rwanda. And as the blue skies above are replaced by clouds, there’s promise for more.

The water was one of the reasons the Mahama camp was established here to accommodate an influx of Burundian refugees who had fled their homes during a time of unrest. But this camp, originally planned for a population of 10,000, is now well over capacity with estimates at more than 48,000 people. 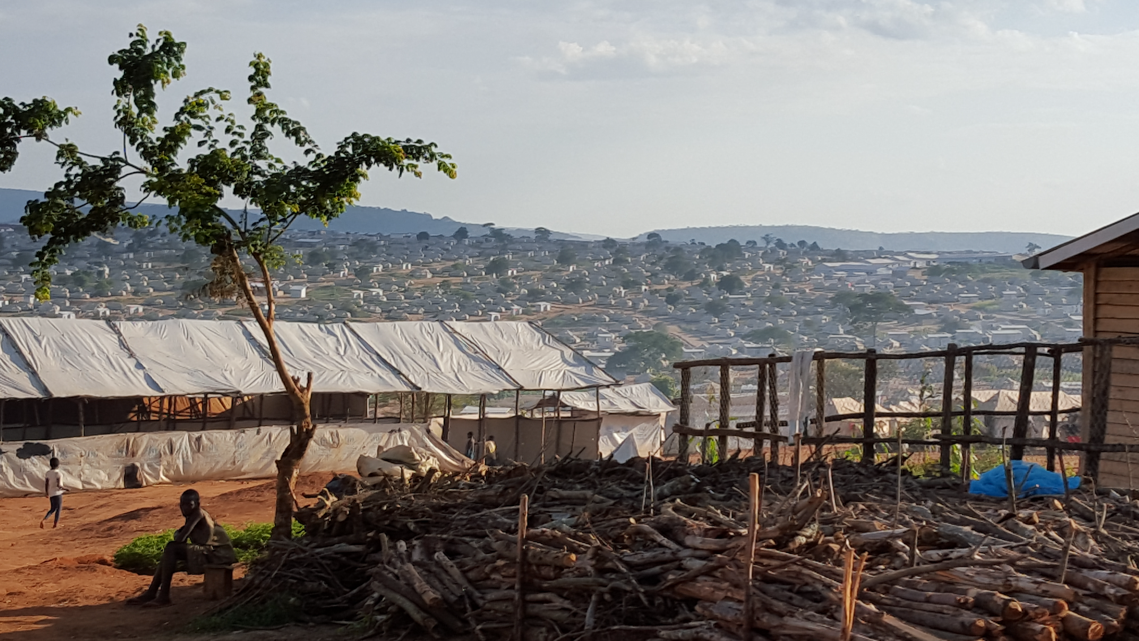 Like many refugee camps, Mahama has become a long-term home for many, resulting in a stressed infrastructure and compromised water systems. Photo: PATH/Jesse Schubert.

And as the temporary system bulges and expands, the most vulnerable residents—children, pregnant women, and the elderly—are at greater risk of exposure to waterborne pathogens and contaminants that can cause deadly diseases such as cholera.

The problem isn’t access to water, it’s making it safer

“The minimum standard in relief settings is to provide 15 liters of water per person per day for drinking, cooking, and basic hygiene,” says Jesse Schubert, a program officer at PATH who recently visited several camps in Kenya and Rwanda, including Mahama. “That is an enormous challenge to do for over 40,000 people every day.”

Camps often have water plants that filter and treat the water with a chlorine solution made from a highly concentrated chlorine powder that is considered a hazardous substance. But supplies are not always reliable, and there is the added expense of buying and safely transporting it.

The cost alone puts this option out of reach in low-resource settings and refugee camps like Mahama. What these camps really need is an easy, low-cost, consistent way to produce safe water.

“Most existing chlorine generators are designed for larger municipal-scale systems, installed by engineers, and operated by professionals,” says Jesse. “These larger systems require special parts, need regular maintenance, and can cost tens or hundreds of thousands of dollars.”

In partnership with Mountain Safety Research (MSR) Global Health, PATH developed the SE200 Community Chlorine Maker, a small portable chlorine generator that could rapidly produce enough chlorine to treat up to 55 gallons of water with only salt, water and electricity. To address the need for safer water in refugee camps and emergency humanitarian responses, PATH, World Vision, and MSR set about developing a larger device, built on the same technology as the SE200.

“It’s not just a treatment innovation, it’s also a supply chain innovation,” says Tim Oriard, Principal Scientist at MSR Global Health. “Treating water with chlorine is nothing new. It’s about improving access in places with limited infrastructure and resources where people need it most.”

Jesse and his team brought a prototype of this larger device during a recent PATH trip to Rwanda and Kenya, to demonstrate its use in several camps and rural hospitals, as part of PATH’s human-centered design process to collect feedback directly from users to ensure the design will be appropriate and easy to operate. The newer device has greater chlorine generating capacity than the SE200, enough to treat up to 4000 gallons of water per hour—or enough for 1000 people.

“Potential users of this larger chlorine maker were clearly excited about the possibilities to easily and safely treat water and eliminate the reliance on chlorine supply chains,” says Jesse. “Generating chlorine on site has the potential to be more cost-effective than the standard practices. The price to operate the device for one hour is simply the cost of one cup of table salt and power from a generator or solar rechargeable battery.”

“We’re still getting input on the device, but there was a great deal of interest about when it would be available. And several people were so excited about the potential that they asked if we could leave the device with them.”

PATH is working to fulfill that request. The plan is to bring more refined prototypes back to Rwanda for field evaluations to garner additional feedback. Once finalized and launched, this new chlorine generator will be poised for adoption by ministries of health and aid organizations for use in low-resource settings like refugee camps and rural health care facilities.