Update 5/20/17:
In May, MSR engineer Linden Klein returned to Kisumu, Kenya, with four refined prototypes of the venturi chlorine doser. With Linden’s assistance, a small team from SWAP installed the devices at different water kiosks. Over the next month and a half, the team will evaluate the device’s long-term dosing consistency and user acceptance. This project is a collaboration with Stanford’s Water, Health & Development program, PATH and SWAP Kenya.

Linden’s first trip to Kisumu (reported on below) revealed that the early venturi doser design proved promising. The device, which automatically doses water with chlorine at the tap, provided consistent and correct dosing across a range of flow rates and at various types of community water points. 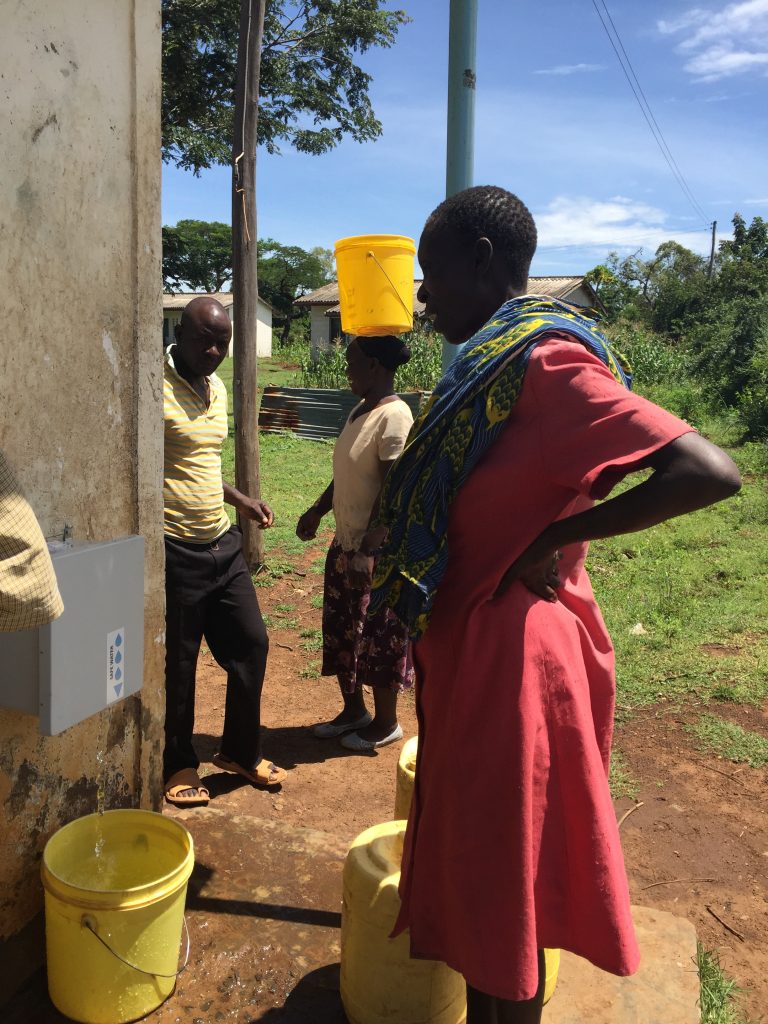 Now the goal is to demonstrate that the devices can dose consistently for a longer period of time.  The four devices will be monitored by SWAP’s field team. The whole team will study how well the devices perform and what, if any, factors impact them—be it the hot, dry climate or human meddling. The devices are meant to work automatically, requiring only that kiosk owners to refill their chlorine tanks. “It’s about making treated water convenient and routine,” Linden says.

From this trial, the team will collect data and user feedback that will inform their next design iteration for a business pilot this summer.

In January, MSR engineer Linden Klein visited Kisumu, Kenya, with a small team to evaluate an early-stage water treatment prototype that would automatically disinfect drinking water with liquid chlorine as it flows from the tap. If successful, the device would offer a new paradigm for water treatment in low-income areas—one that requires little behavioral change from community members, aiding its widespread acceptance.

The project seeks to improve the design and engineering of a venturi chlorine doser concept initially developed by Stanford’s Water, Health & Development program, which turned to MSR for our team’s product design and manufacturing expertise.

In Kisumu, Linden’s team evaluated the prototype for its dosing consistency at various community faucets with differing sources and flow rates. Their learnings will help inform the next stage of prototypes. Later this year, the team will return to Kenya with refined devices to evaluate their long-term dosing consistency and user acceptance.

Below, Linden share pictures and a recap of his trip. This project is funded by Stanford and is a collaboration with PATH. 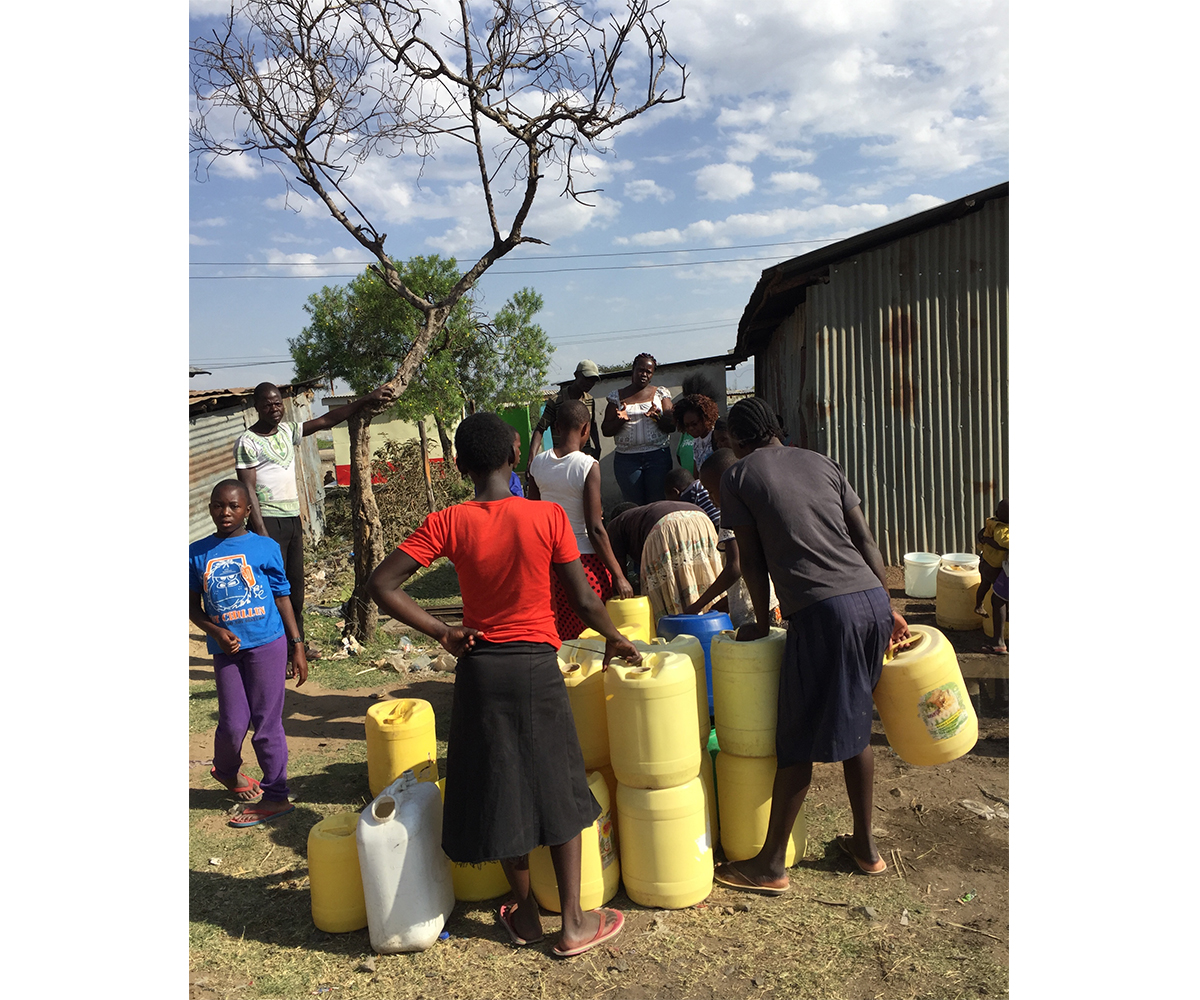 Kenya is currently experiencing a severe drought. Some water access points are completely dry, while others, such as the one pictured here, was being rationed to flow a few hours each day. Water was collected as fast and for as long as it would come out. About 15 minutes after this picture was taken, the water supply to this tap was shut off for the day. 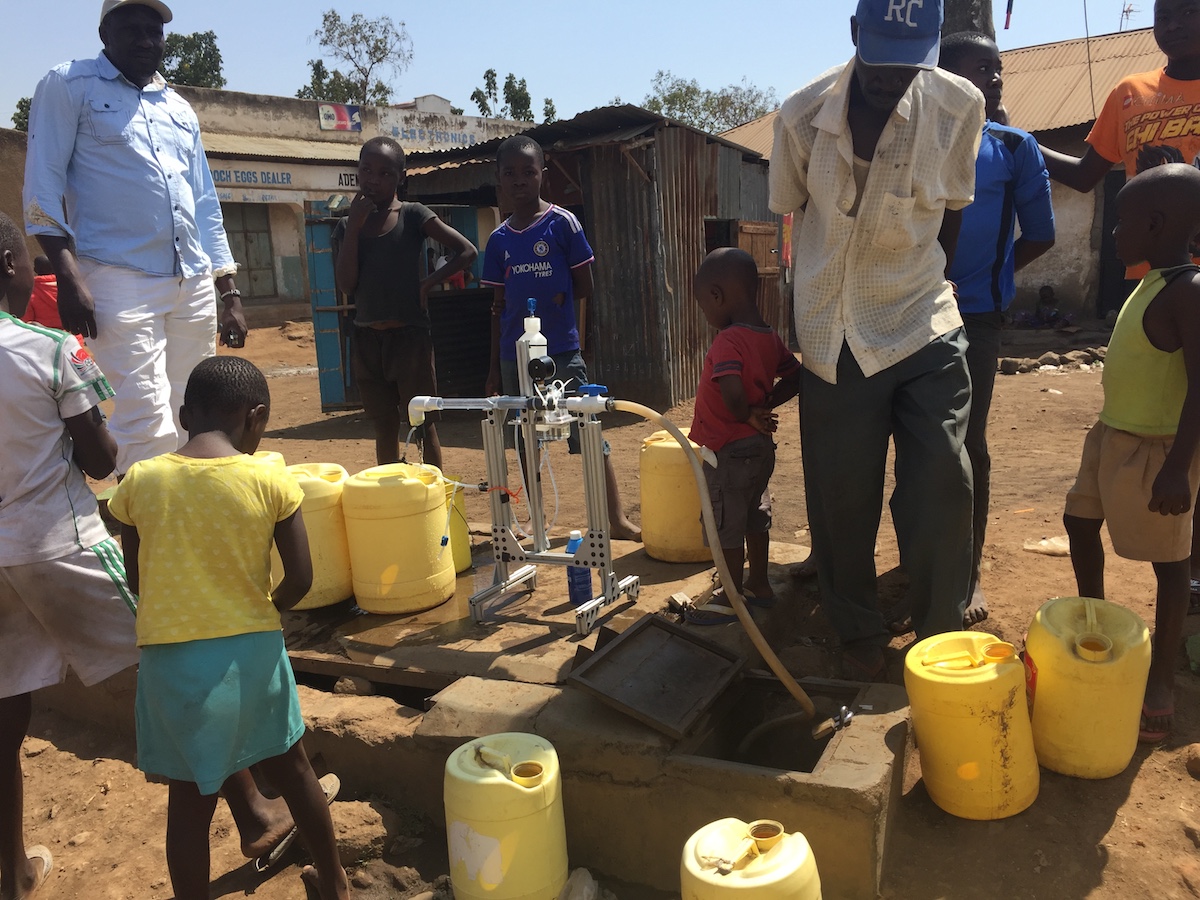 This is a water access point at an informal settlement in an area outside of Kisumu, where we are testing an early prototype of a venturi chlorine dosing system.  While sources of chlorine are available in grocery stores around Kisumu, most do not take the extra steps to purchase it and properly treat their water.  This device automatically adds a dose of chlorine, adjustable from 0.5 to 3ppm, from a concentrated source. Our initial finding was that the prototype generated a lot of curiosity among children. 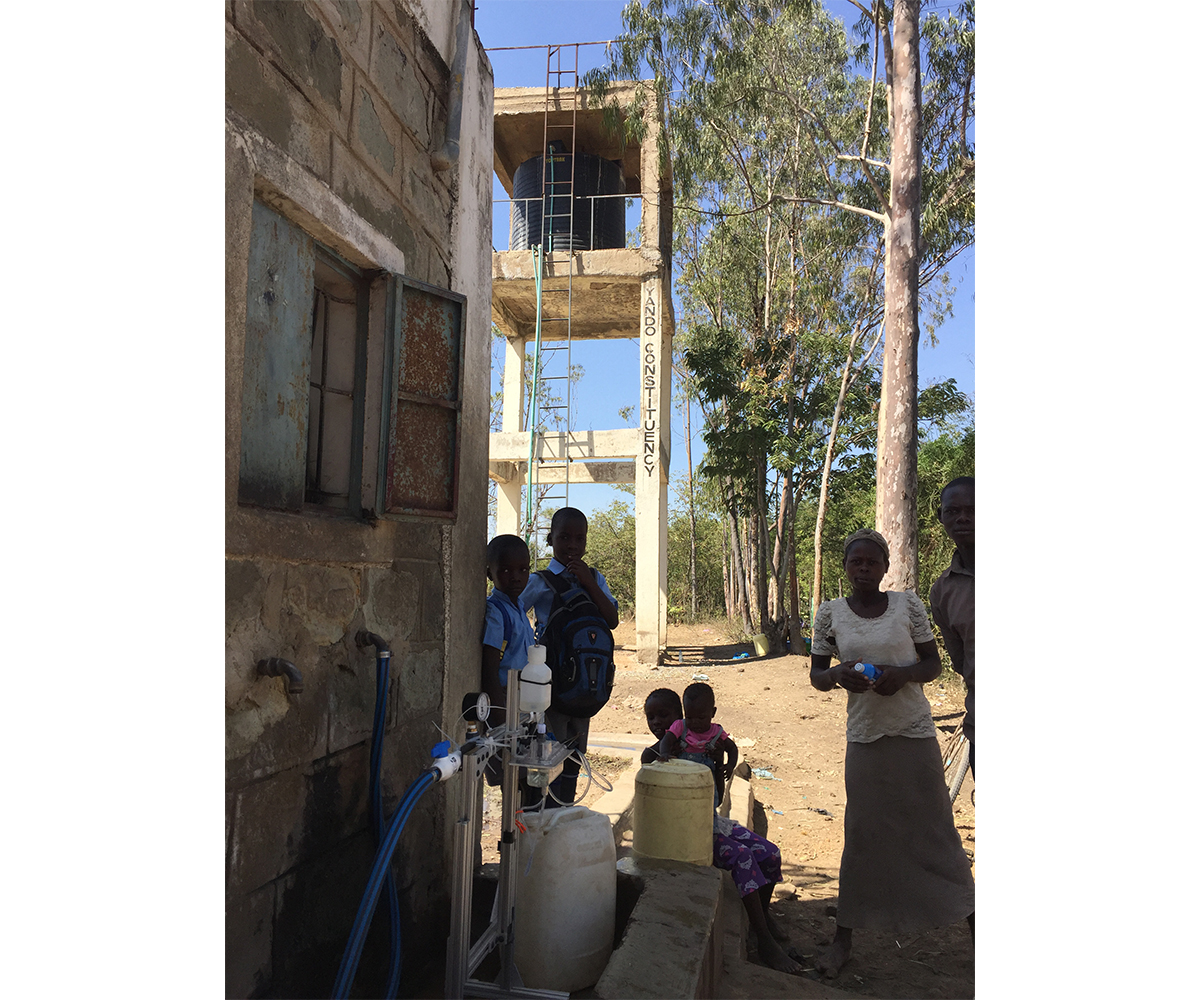 This water kiosk was built by USAID in 2006 to provide the Kukuoyo school and surrounding community with a reliable source of ground water for 2 schillings for 20L (2 cents).  Still, outbreaks of cholera have occurred here because the water is untreated.  Chlorine leaves a lasting residual, which helps prevent contamination well after the water leaves the tap. 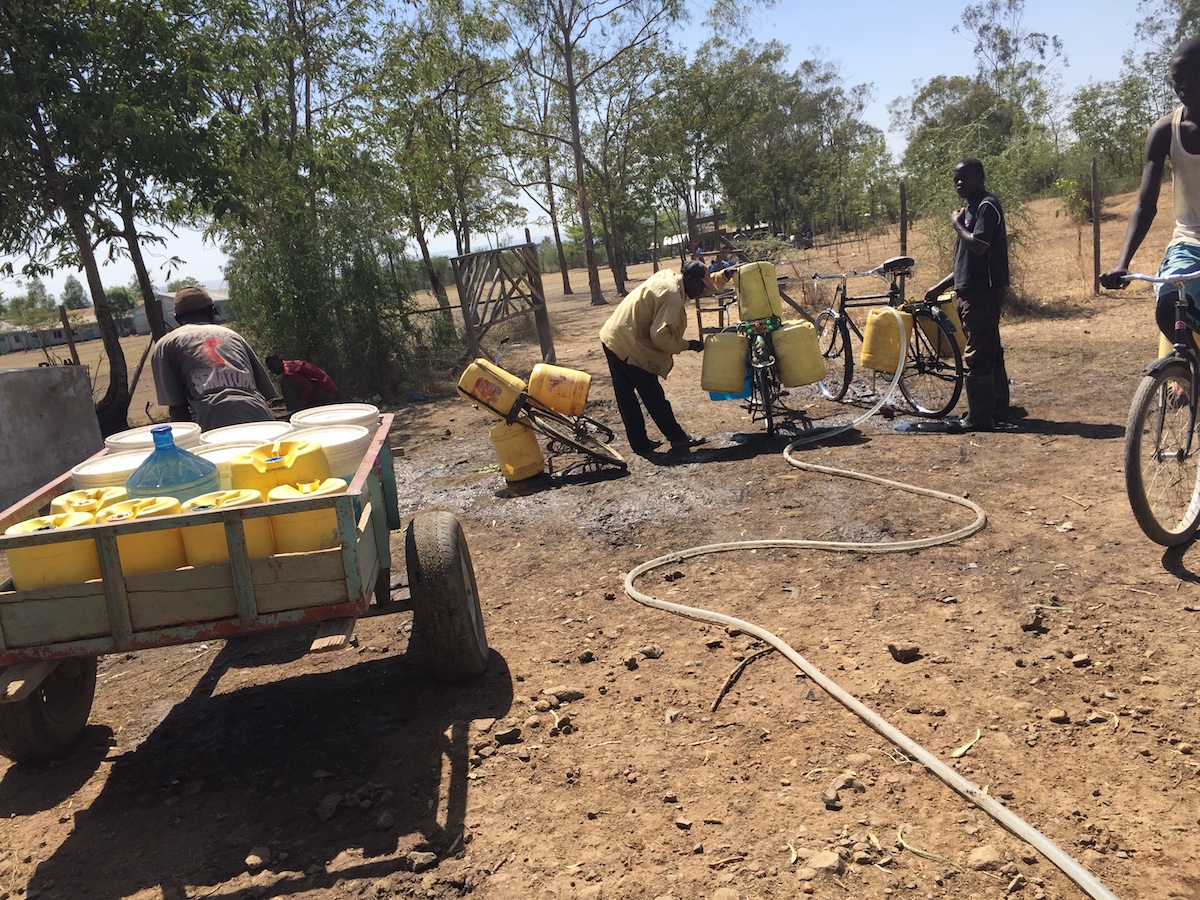 Fetching water is a business opportunity.  These men deliver water to local homes, some by bike and another by cart with the aid of a donkey.  Each one of those containers is 20L, so that’s 45 lbs each when full. 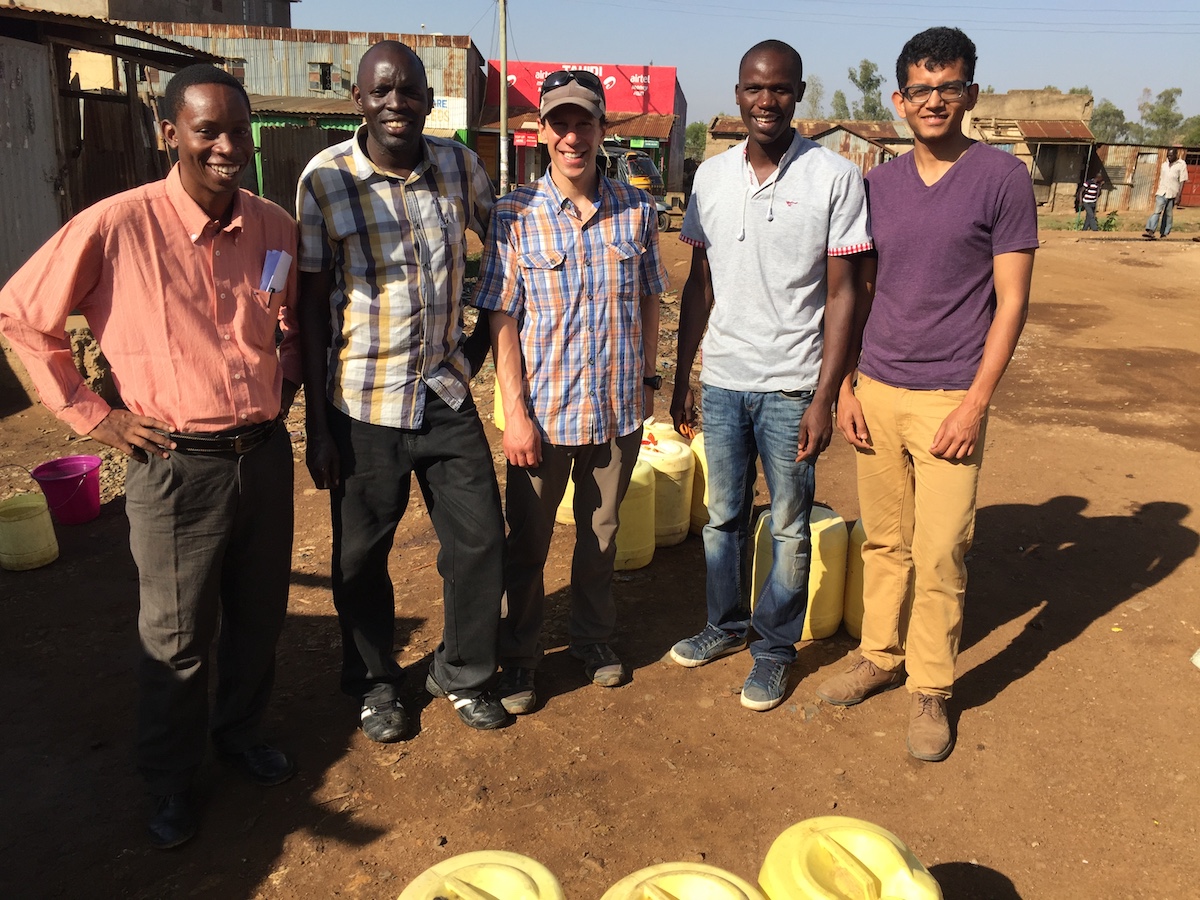 The Team.  We partnered with Safe Water and Aids Project (SWAP) in Kisumu to help us get around and work with the local communities.  Pictured from SWAP are Jared, Ronald, and Job.  Shreyan at right is a graduate student at Stanford.  I am the dorky one in the middle.  This project is only a small part of the work SWAP does in Kenya to improve health at the community level.  www.swapkenya.org 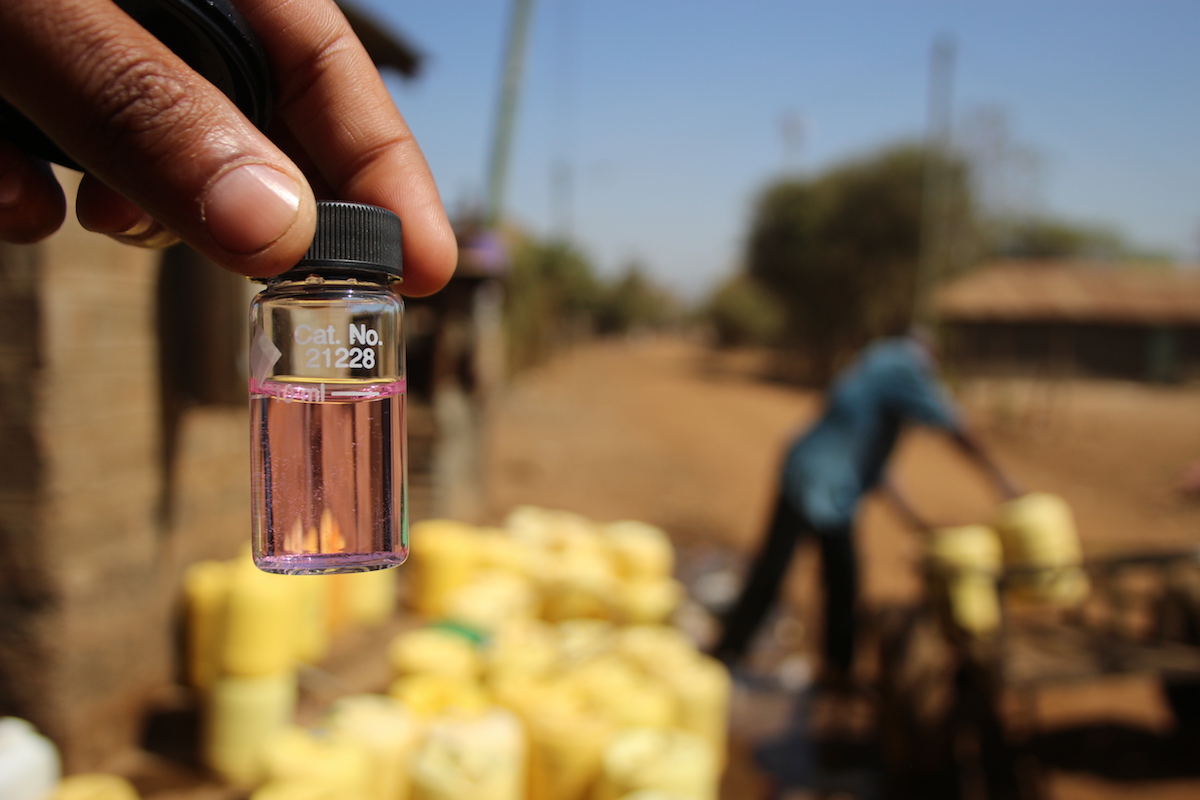 Our work focused on ensuring that the prototype added the correct dose of chlorine to the water.  While test strips give a rough idea of the concentration, colorimetry is a far more accurate method.  A reagent reacts with the chlorine and turns the solution pink proportional to the amount of chlorine in the water.  An instrument measures the absorbance of light at a certain wavelength and converts it into a concentration of free chlorine in the sample.