In August of 2019, my friend Kirk and I fulfilled a childhood dream, paddling the Hudson River from source to sea. Growing up, my friends and I would explore my small hometown and go as far as we could get before making it home for dinner. We would go paddling, swimming, cliff jumping, hiking and occasionally jump trains when they were moving slow enough. Setting off to wander our town each day was an exploration, even if we had been there before.

As kids, my friends and I were too naïve to even realize that our exploits rarely took us more than a mile or two from home, yet they still had a sense of adventure that built the kind of lasting friendships that are only forged in the outdoors. This trip was a tribute to that. 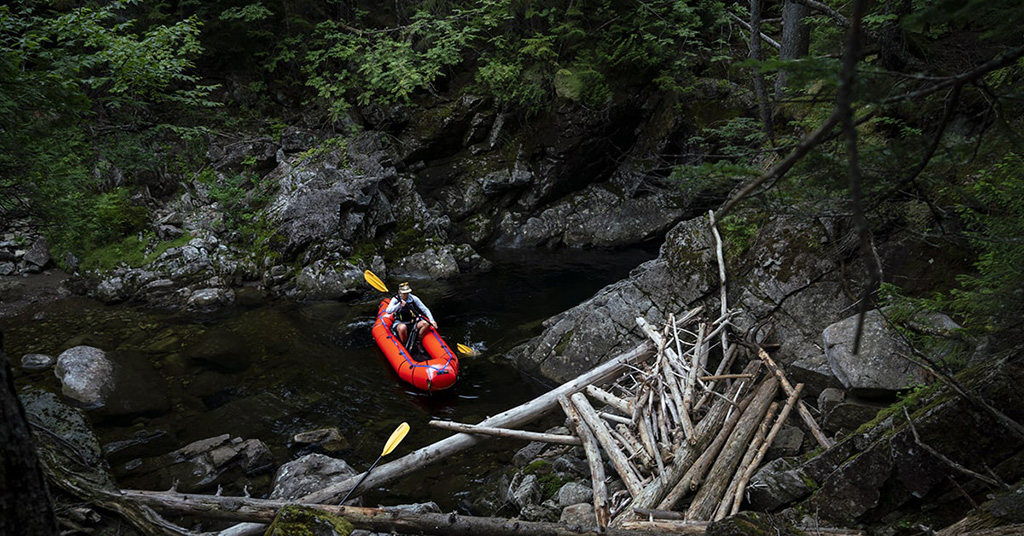 The source of the Hudson River is in far upstate New York on the slopes of Mt Marcy, the state’s tallest peak. We were committed to traveling the entire river. Even if that meant inflating the raft to paddle for 15 feet while mostly hiking and wrestling the boat through shallow water for the first two days.

Basically, as soon as the river becomes deep enough to paddle, there is whitewater. We followed the local rafting guides through them the best we could before striking a rock and getting a couple of holes in our raft—not a great thing to happen on day three of a 15-day trip. 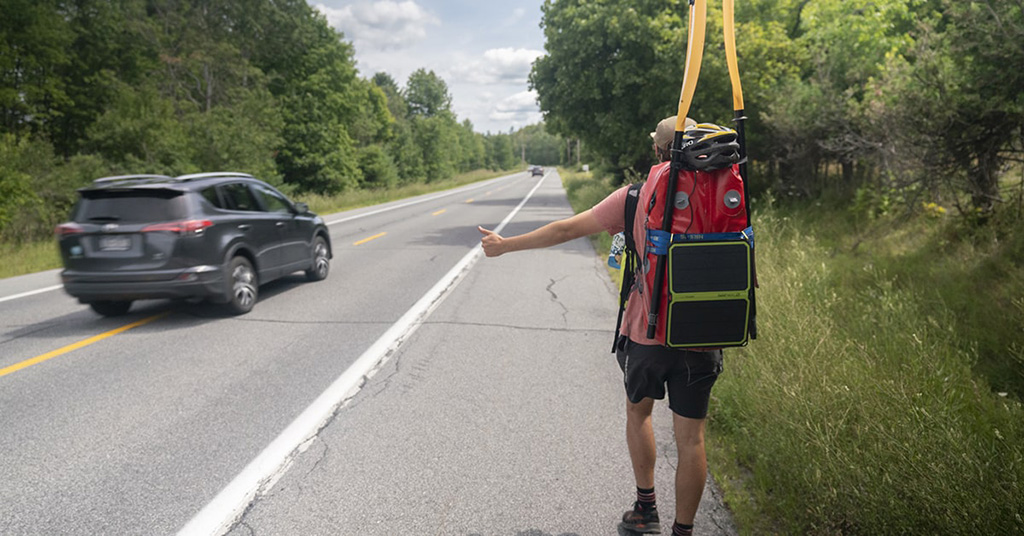 In order to not waste time, we started to hitchhike while the patch set on the raft. After walking a mile or two, a van stopped and offered us a ride. Steve and Pat were in the Adirondacks celebrating their 40th wedding anniversary—they picked us up because they saw our packs and paddles and knew there was a story. They had experience hitchhiking and meeting strangers while traveling and were paying it forward. Though our visit was short, I’ll always remember Steve telling us to appreciate the time together because it goes so fast. 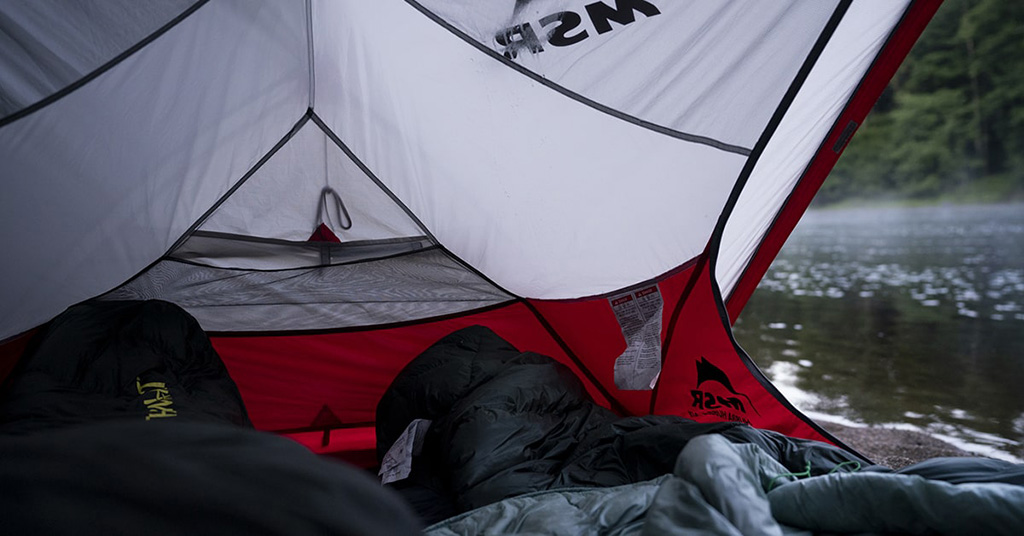 After that slow start, we finally got to a section of river we were able to consistently paddle and not worry too much about shallow water slowing us down. This evening was bliss. We paddled smooth water to a sandy campsite—one of the first spots we were able to really enjoy sitting, making dinner, setting up our tent and being present with each other. It felt like we were really out there on a remote river. That is until a car blasting heavy metal pulled up the dirt road not far away on the other side of the trees; a reminder that the Hudson is seldom remote. 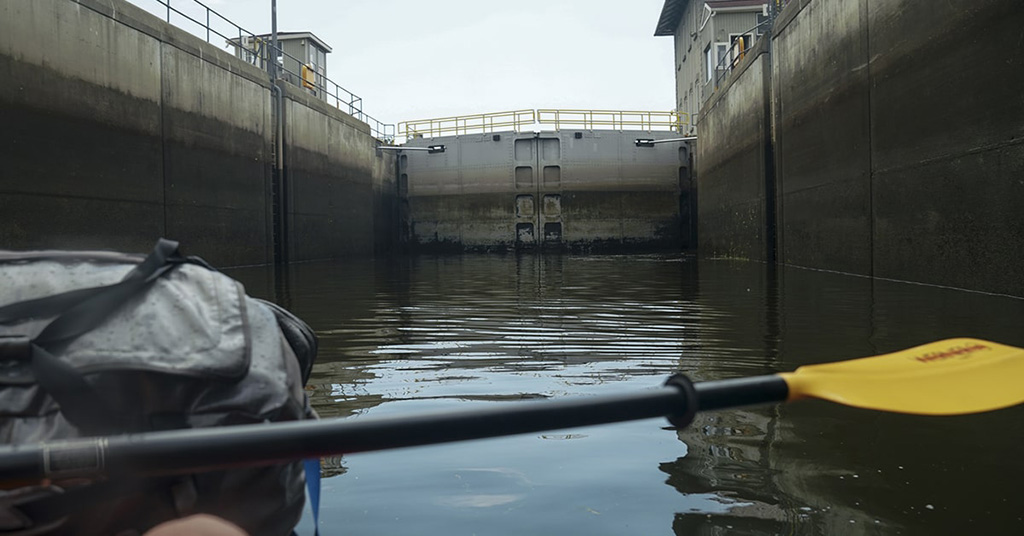 As we slowly made our way through the subtly flowing river, we came across a number of dams, locks and waterfalls that we needed to portage. Once the locks started to become a bit more frequent, it was a sign that the river was hardly flowing. They were the gateway into the more industrial and populated portion of the river. 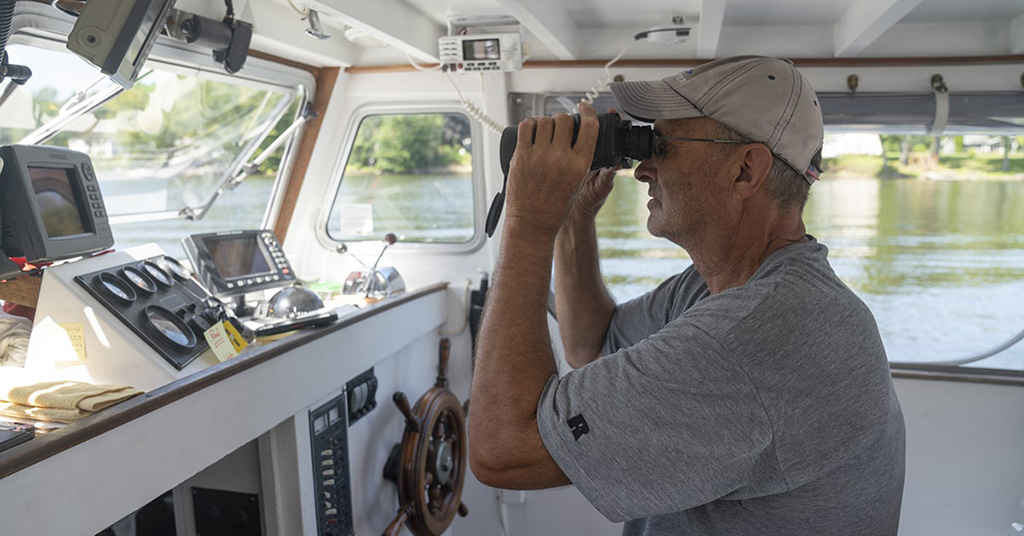 We were going slow and open to some help to move us along a little quicker. Thankfully, after hearing a bit about what we were doing, Captain John Lipscomb of Riverkeeper was in the area and offered to give us a ride. Riverkeeper is one of the leading organizations working to heal and protect the Hudson River. The Hudson was historically used as the sewage dumpsite for towns and corporations. Though illegal, it’s something that still happens, and that’s why Riverkeeper is here. A large portion of the Hudson is considered a superfund site.

Captain John gave us a rundown on the issues at hand and talked about his work with Riverkeeper, acting as a watchdog of the Hudson to protect it. I was thankful to have met John. Growing up along the Hudson, I had never really understood the issues at hand. The river for me was all about fun and hanging out with friends. It was the place that inspired a lifetime of adventure, but I am still learning how I can help protect it too. 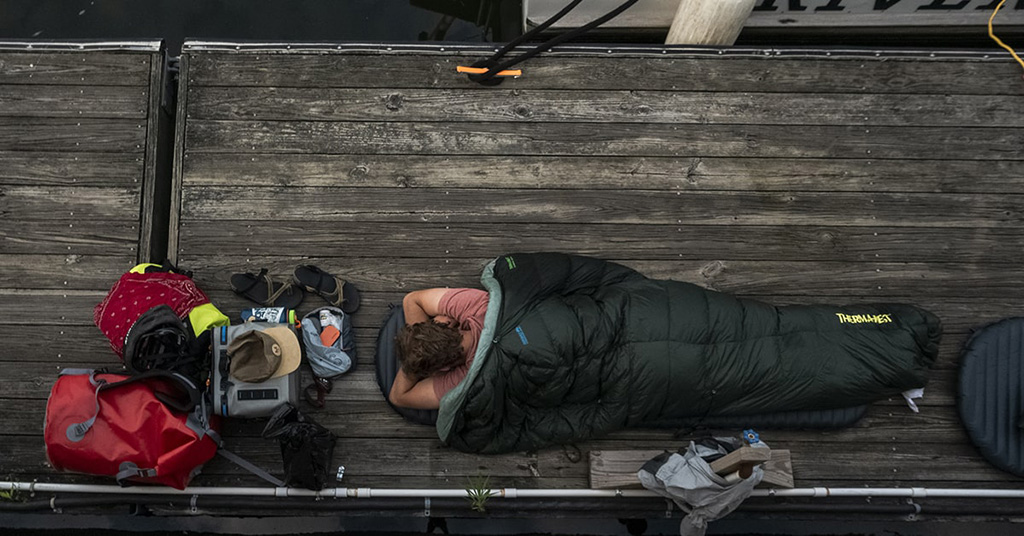 We spent the whole day with John and even slept on the dock beside his boat. We asked him questions about what was ahead of us, and if he had any tips for the second half of our journey. He then asked if we had a chart. Disappointed to hear we only had one on our phones, he gifted us a physical map. This gave us more information than we even knew what to do with. John helped us understand that the next 150 miles are tidal, and it would be nearly impossible for us to fight the tide when it was coming in. He also taught us how to use our walkie-talkie to communicate with the large ships with which we were now sharing the waterways. 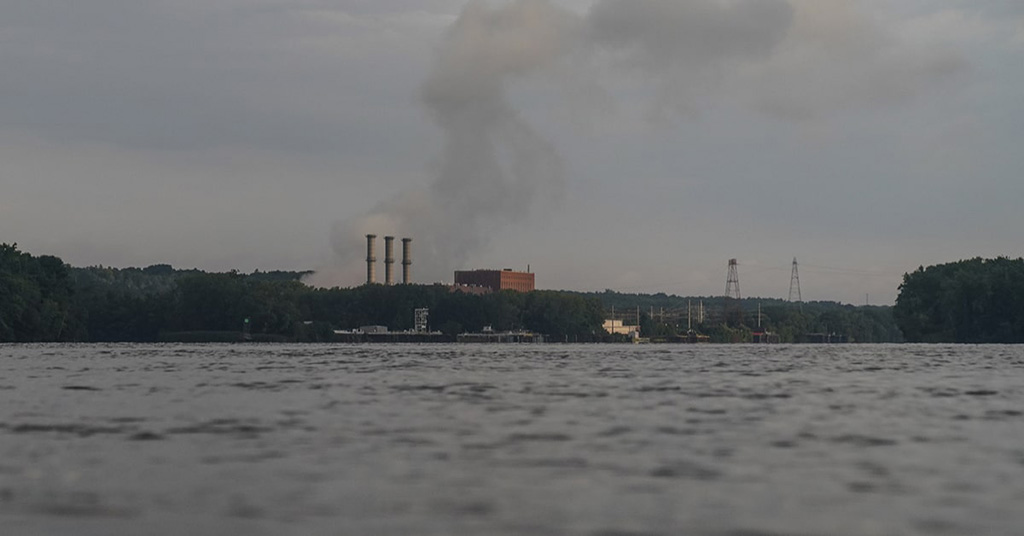 Captain John was right when he said we were in big water now. The signs of pollution were visible and finding camping spots was a little less ideal. 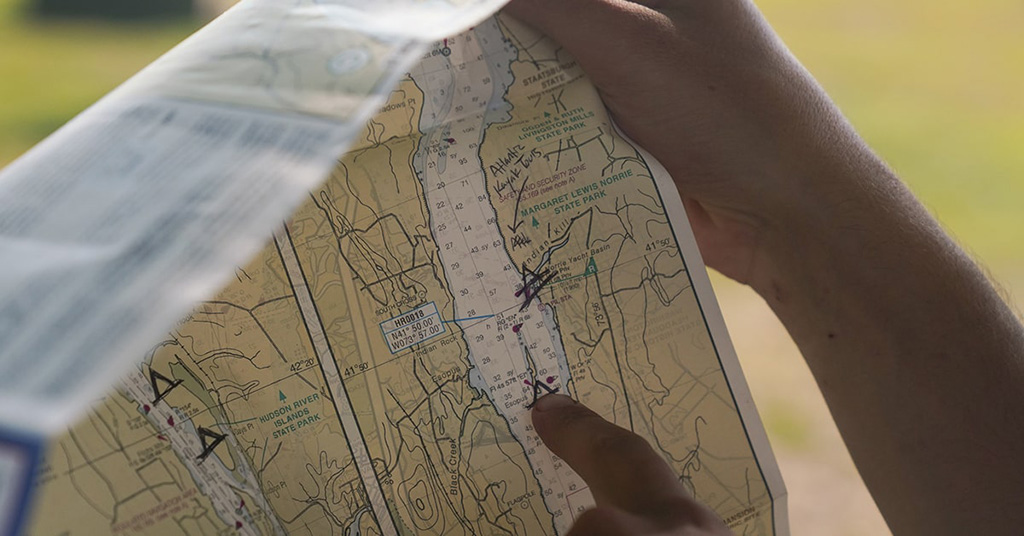 Unfortunately, we misread the charts and spent an entire morning paddling against the tide. For perspective, our average speed was 2 mph and max speed 4 mph. Sometimes we weren’t moving at all. 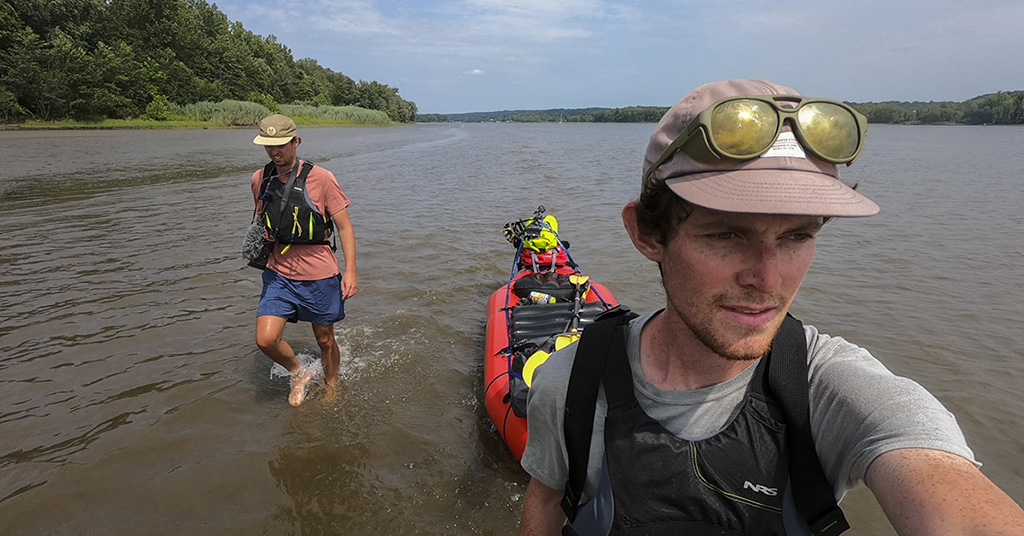 We tried to see if walking the boat was faster than paddling. It actually was. 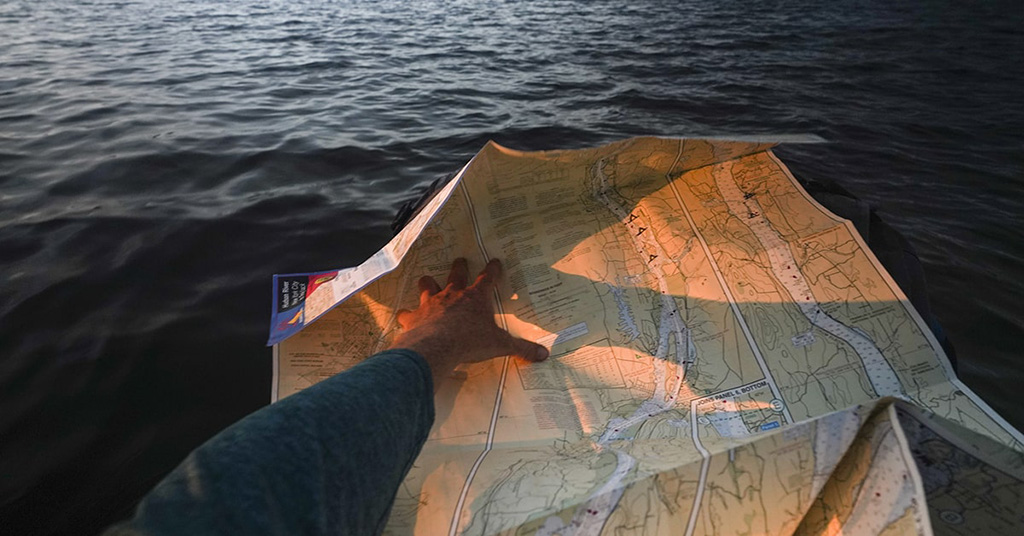 Eventually, we got the hang of paddling with the tide and taking breaks when it was against us. We also got a little better at finding nice campsites. 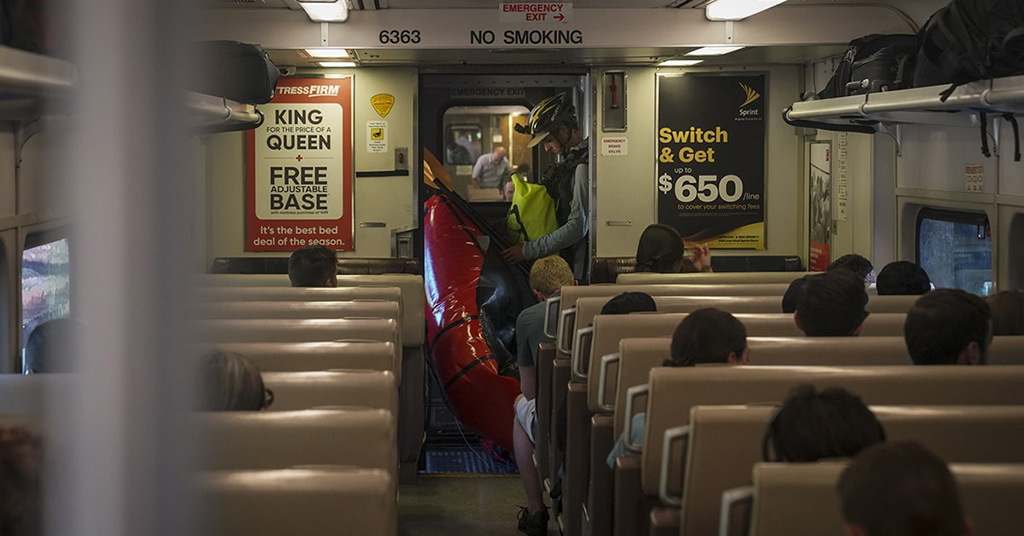 Even still, one particularly slow afternoon we noticed the Metro-North go by and had the nice idea of hopping on for a stop or two. Surely this would help us pick up the pace.

After about a week and a half, we made it to familiar waters and my hometown. We stayed in my childhood home with my parents and hung out with some of my best childhood friends. Being able to show Kirk the town and people that inspired this trip for me helped me remember what this trip was about and that in many ways, it was revisiting the feeling of childhood exploration and the relentless joy of growing up in the Hudson Valley. 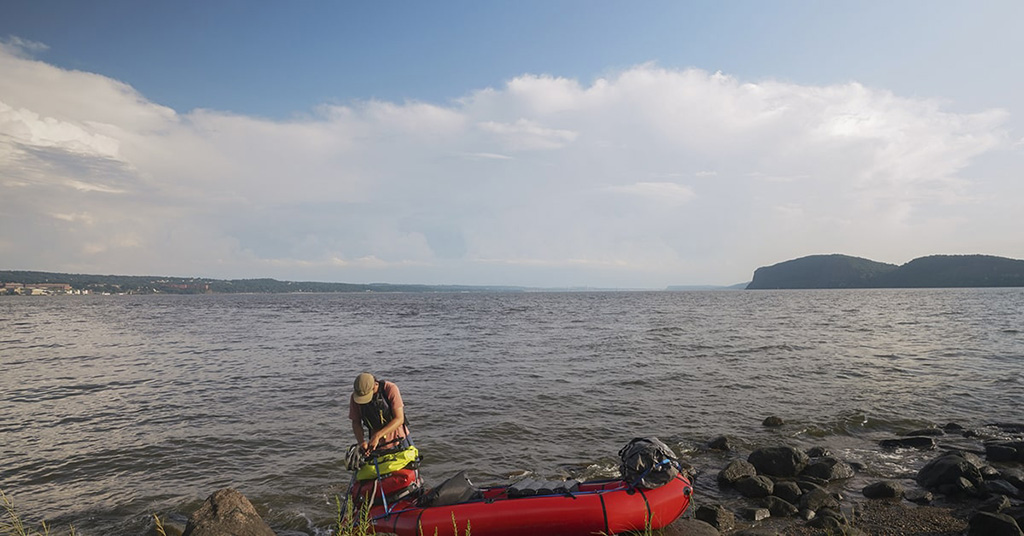 After Cornwall, we were on the final stretch. There were only about 50 miles left, but these miles included the widest portion of the river. Here there was a significant increase in water traffic, fewer campsites and dirtier water. We were at the mercy of tides and late summer thunderstorms, leading us to paddle at night for a little while. 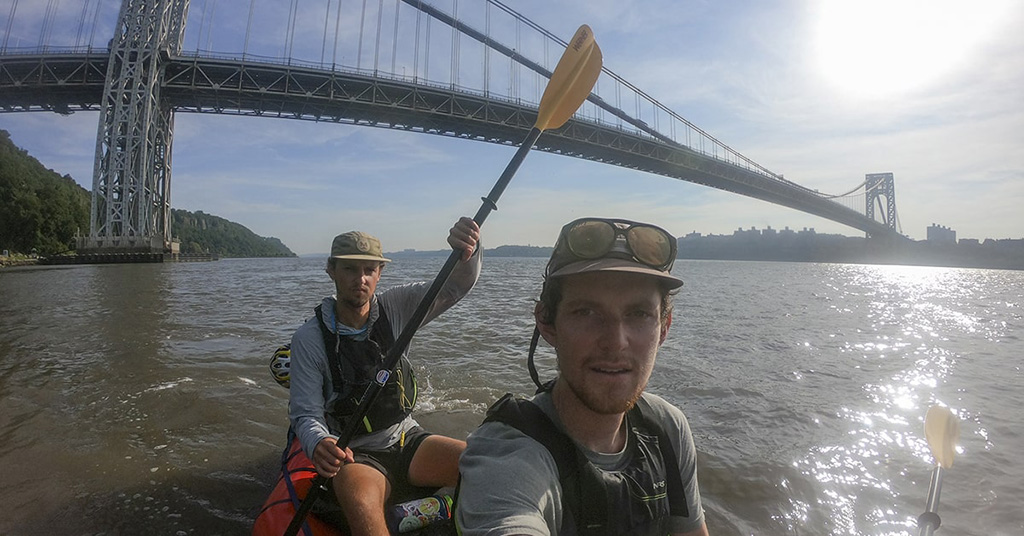 I had always wondered what the Tappan Zee and George Washington bridges would look like from the river. 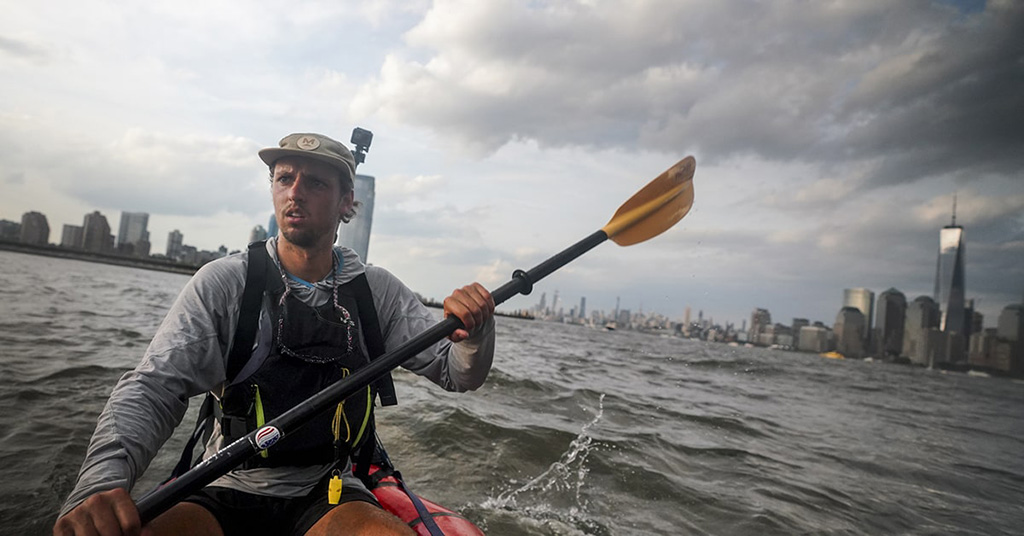 On the final day, we were in New York Harbor getting buzzed by ferry boats and tossed around by the currents. The closer we go to the sea, the more tumultuous the current grew. In the distance, we saw storm clouds and wondered if we were going to make it to the end before getting doused in ‘the storm of the summer’. 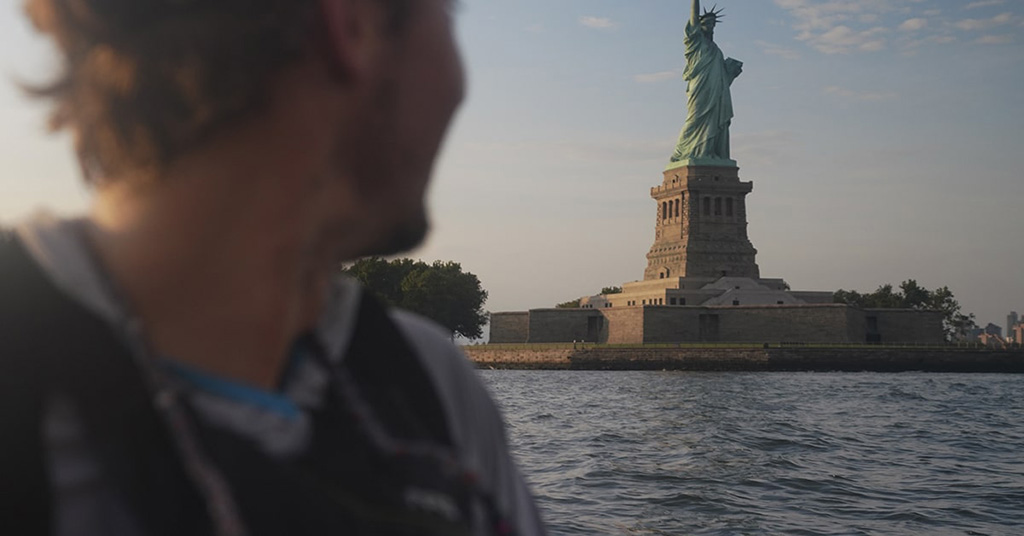 In front of the Statue of Liberty, the water went calm as we looked back upriver and saw the Manhattan skyline. Kirk unpacked a bottle of champagne that we enjoyed together, laughing in the last moments of 15 days of paddling the Hudson River from source to sea.

Revisiting my hometown and old friends brought back some of my best memories of childhood. One of the best things about growing up in a small town was the freedom to roam and feeling like I was exploring the world. In reality, I only got as far as I could get before heading home for dinner. I didn’t really have any idea where the river came from back then, and that interested me enough to dream of someday doing this trip. I thought going back and doing it might be a way to revisit my youth and get back some of that childlike wonder.

For 15 days, Kirk and I were two feet apart at the mercy of the river. Some days we went slow; some days we went even slower. We learned from people along the way and took lessons from each other. In this stretched-out time, we realized there was nowhere else we needed to be. We were there in the moment; there for all the moments. We didn’t just go down the Hudson. We navigated this path of my youth, revisiting—and slowly re-creating—the childlike feeling of exploration that still gives me so much life.

We go on trips for some sort of an experience, and this one taught me that the time making memories and moments is when strangers become friends. This is what makes a journey memorable. In reality, the Hudson is not exactly what most people would imagine as the river of dreams. It doesn’t have world-class whitewater, towering canyon walls, clear blue water or even much pristine wilderness. Regardless, navigating this slow-moving river with Kirk reminded me the best adventure is the one you can take.

There are millions of people who live along the Hudson River and before going on this trip, we were only able to find records of a handful of people who have ever paddled it from source to sea. I know not everyone would want to do this trip the way we did it, but millions of people have access to a river that could give them a trip of a lifetime. Going out for a day paddle, an overnight trip or even a picnic at a riverside park might just be the experience that can return people to that childlike feeling of being present, exactly where they need to be to see the beauty in shared moments.

Story and Photos by Brendan Davis

You can also watch the full film here:

The River That Flows Both Ways from Little Bear Creative.