The sun beat down on our adventure team. The other kayak had pulled off a kilometer ahead in the shade of a rock to wait. As we caught up, movement in the water signaled action—on the other side of the rock, a pod of dolphins was hunting our bait ball.

We paddled over slowly, arriving as the feast was ending and the cetaceans turned their attention on our kayaks. As they swam faster and faster toward us, I tried to raise my camera for a photo but was too slow. One of the dolphins jumped beside my boat, splashing me and my camera while its pod swam underneath my shiny white kayak. 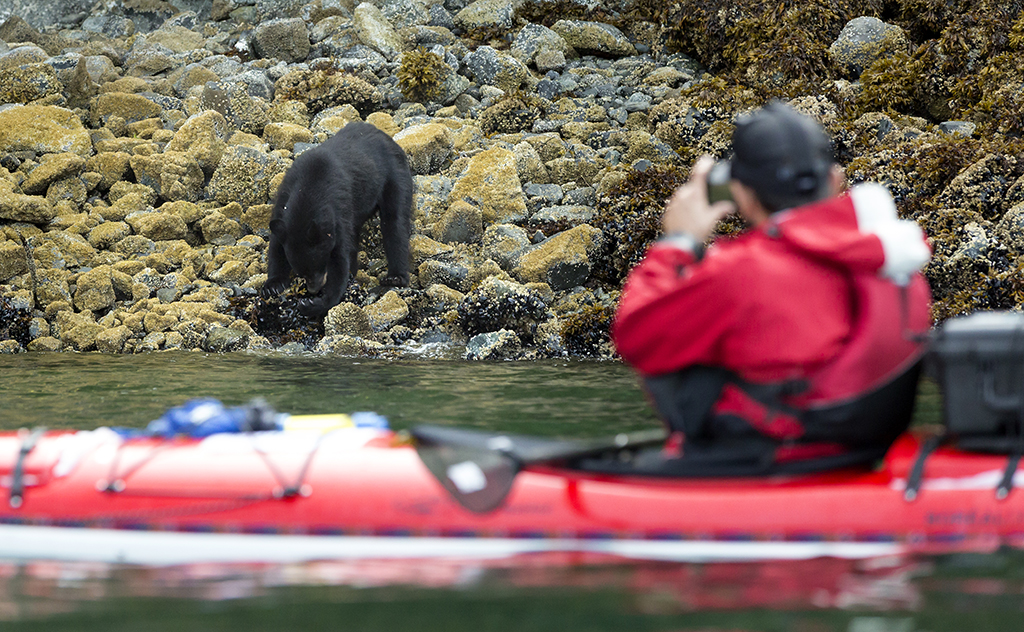 My companion and fellow journalist Jason Motlagh looked at me in awe: “That was really close…” Yes, Jason, like most things on this journey, it was. 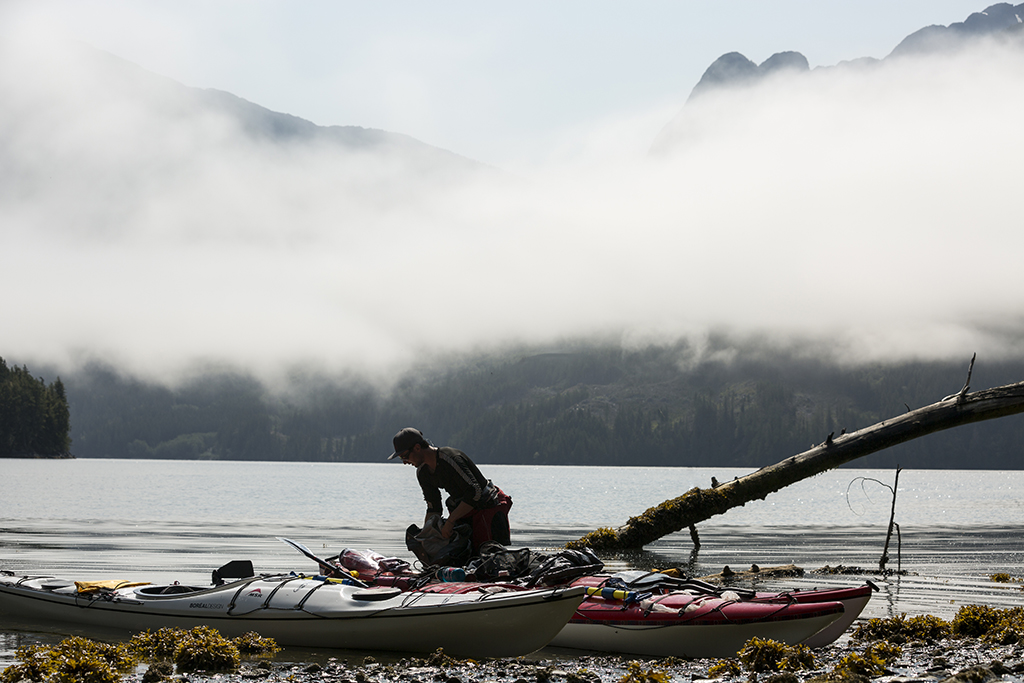 On this 12-day expedition, we were paddling the coast of Vancouver Island, up to the Great Bear Rainforest. The coastal temperate rainforest runs along the western fjords of British Columbia and is famous for its abundance of gray wolves, grizzly and black bears, Sitka deer, cougars, mountain goats, sea lions, seals, sea otters, humpback whales, and orcas who call this area home. 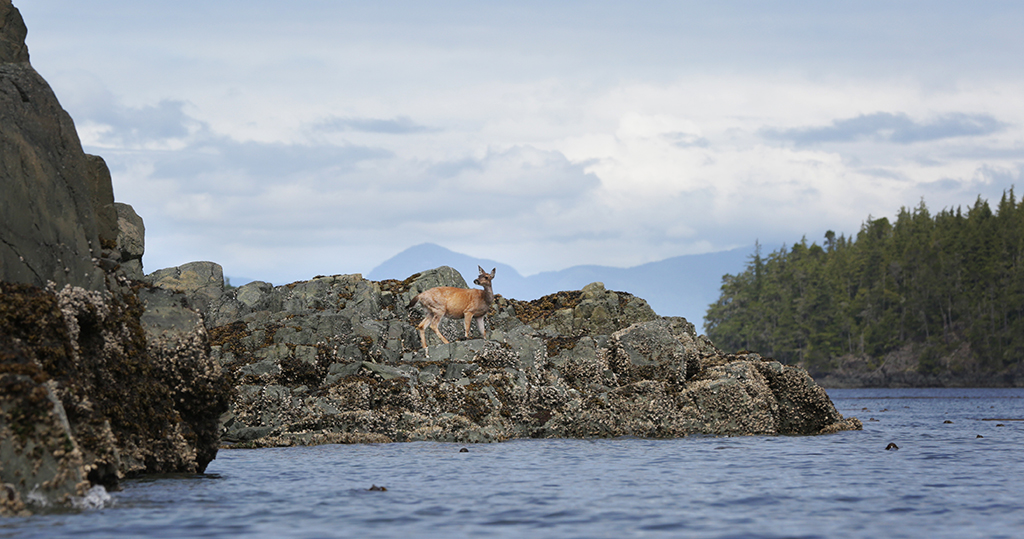 In July and August, many of these animals, especially the grizzly and orcas, come to rainforest for the salmon that return to the streams to spawn. This had made bear and orca sightings commonplace. Yet, in recent years, the salmon populations have declined. Many believe the Atlantic salmon fish farms that dot the waters of the rainforest are part of the problem. We’d come to investigate the farms’ impact on the region by speaking with locals, experts, fisherman and Indigenous peoples, and examining the fish farms firsthand. 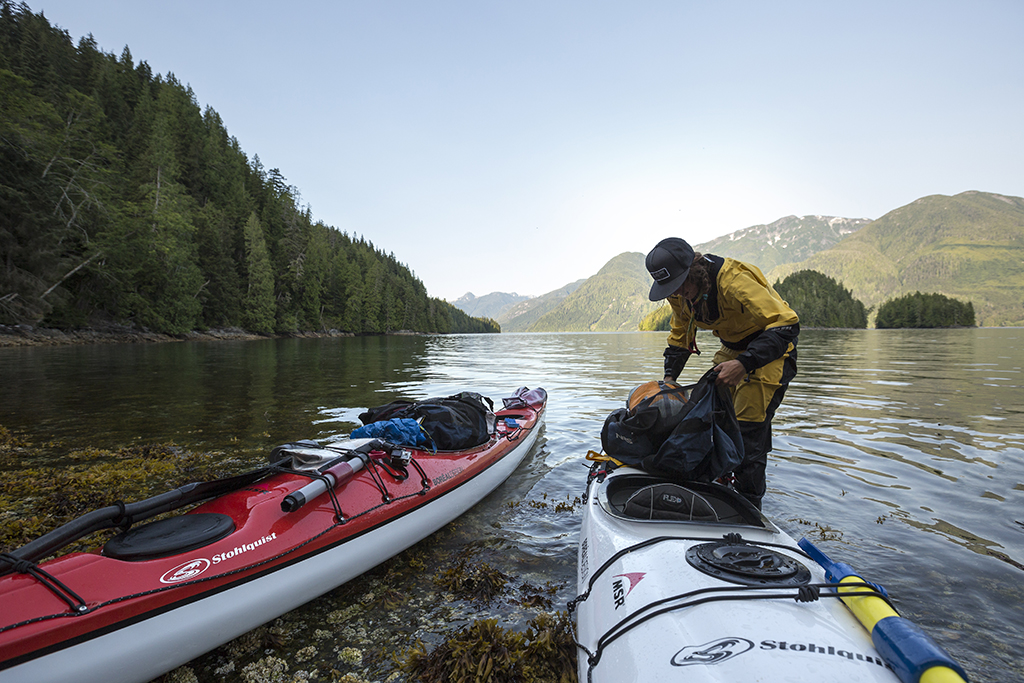 Like most adventurers to this area, our trip started in the tiny touristy village of Telegraph Cove. On the northern edge of Vancouver Island, Telegraph Cove is the launchpad for kayaking outfitters. I knew the thoughts in these tourists’ minds as they stuffed their bags into the hatches of their boats: “Will we see a bear?” “Maybe orcas!” “A humpback breaching?” Many asked where we were headed. For fear of alerting the fish farms to our objectives, we mentioned paddling the Broughton Archipelago, which was a true story. 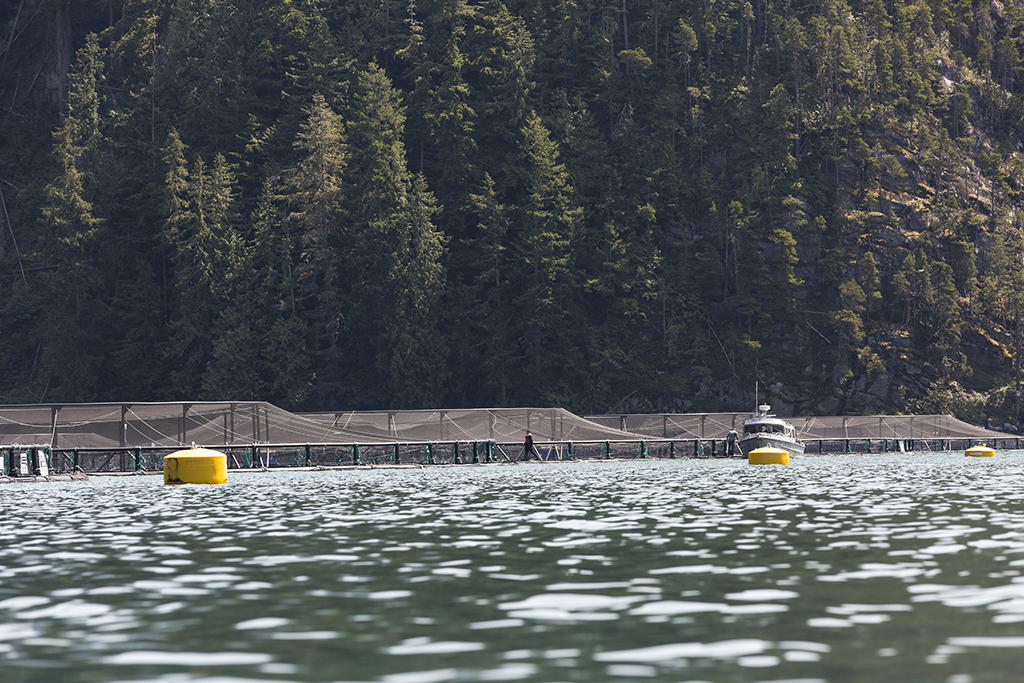 As we paddled deeper into the fjords of the BC mainland, away from Vancouver Island, the tourists were exchanged with fish farms. Astonishingly, every island or fjord seemed to harbor a farm.

One minute we’d witness humpbacks breaching, surrounded by huge forested islands. The next, we’d turn a corner and see a massive chain link fence cutting through the water. These fenced in perimeters held thousands of Atlantic salmon swimming in circles in what is considered by many to unsustainable fish farming. 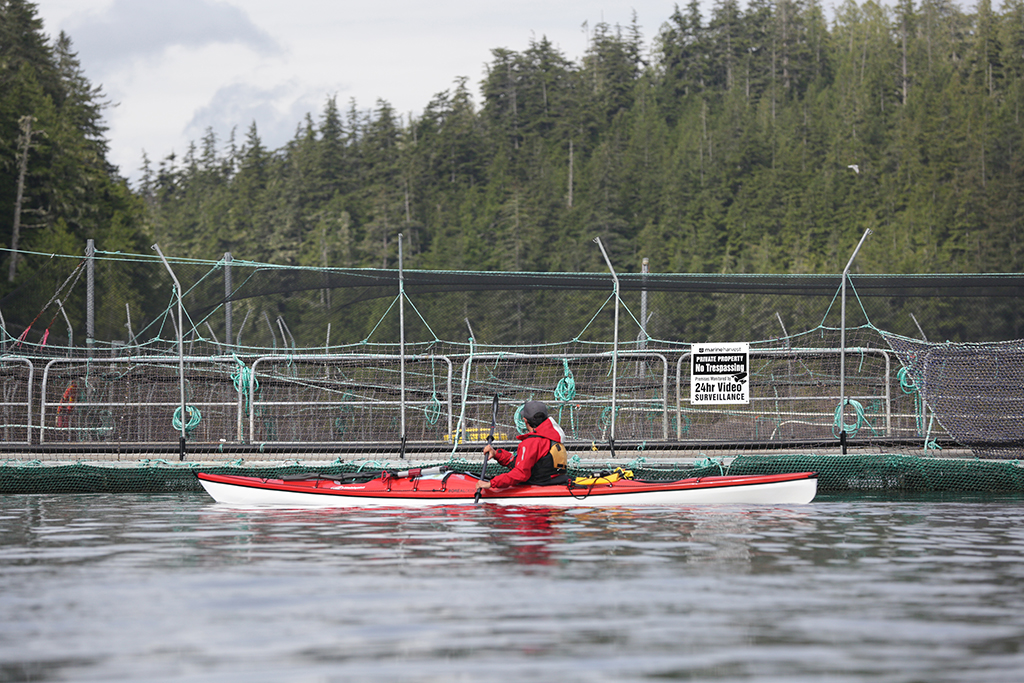 On the perimeter of one, we found an employee. When we asked what the facility was, he shrugged, saying it was nothing but a generator. At another, the employee was polite, but asked us to leave and photographed us as we departed. Thirty minutes later, he and another worker rushed out on a speedboat to suggest an alternate route for our journey while shining body cameras on us.

This fish farmer paranoia would become a trend on our expedition.

The day we arrived in Echo Bay off Gilford Island, a Sea Shepherd boat also sailed in. Known for their activist activities in Antarctica, where they work to prevent Japanese vessels from hunting whales, Sea Shepherd had also come to collect info on the effects of the farms.

Alexandra Morton, an activist and biologist, was aboard. Morton has fought for stronger regulations on farms in BC for years. She believes the farms are devastating the natural environment, bringing new diseases to the native Pacific Salmon—stronger regulations must be implemented by the Department of Fisheries and Oceans, she said.

When we recounted the suspicious behavior of the farm employees, she passed a pair of binoculars and pointed to a grey spot in the distant. “That’s a boat a hired to track us,” she said. This expedition was quickly becoming more intense than I’d anticipated.

Our journey took us to Gilford Island, where we chatted with the locals about the presence of the farms. One man had lived in the area his entire life. “Anyone who tells you the farms aren’t damaging the area are full of it,” he said. “I used to catch fish all the time; now I’m lucky if I catch one a day. The fishermen with their big boats are catching fewer salmon too. Soon, there won’t be any fish left.”

An Indigenous fisherman told us he used to work at a fish farm: “We all did when they first opened,” he said. “Slowly we all went back to fishing, but now there are hardly any fish left.”

We heard repeatedly that many believe the fish farms are impacting not only the health of the native fish, but jobs and livelihoods. (When we later reached out to the farms for their side of the story, they were unwilling to speak to us.) 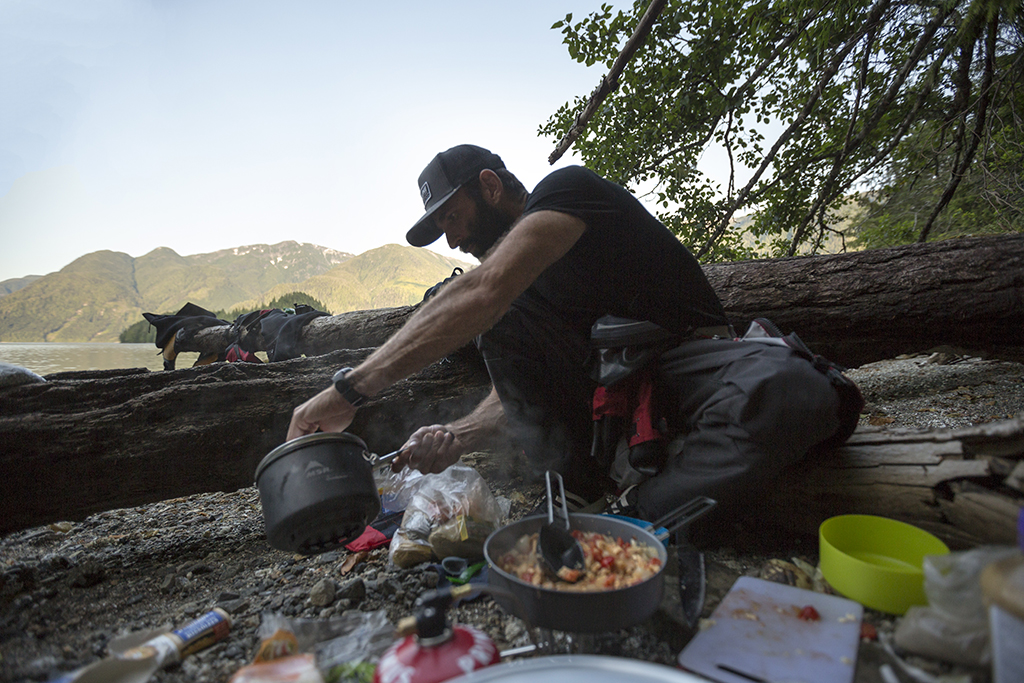 We continued to our circumnavigation of Gilford Island. Each evening, after a nearly 20 km day, we’d pull into camp, ready for dinner. Jason’s charisma earned us gifts of food from people we met along the way—deer sausages, fresh prawns, and other local fare. In the mornings, we’d crawl out of tents, don our drysuits and start what was beginning to feel like somewhat of an espionage mission. 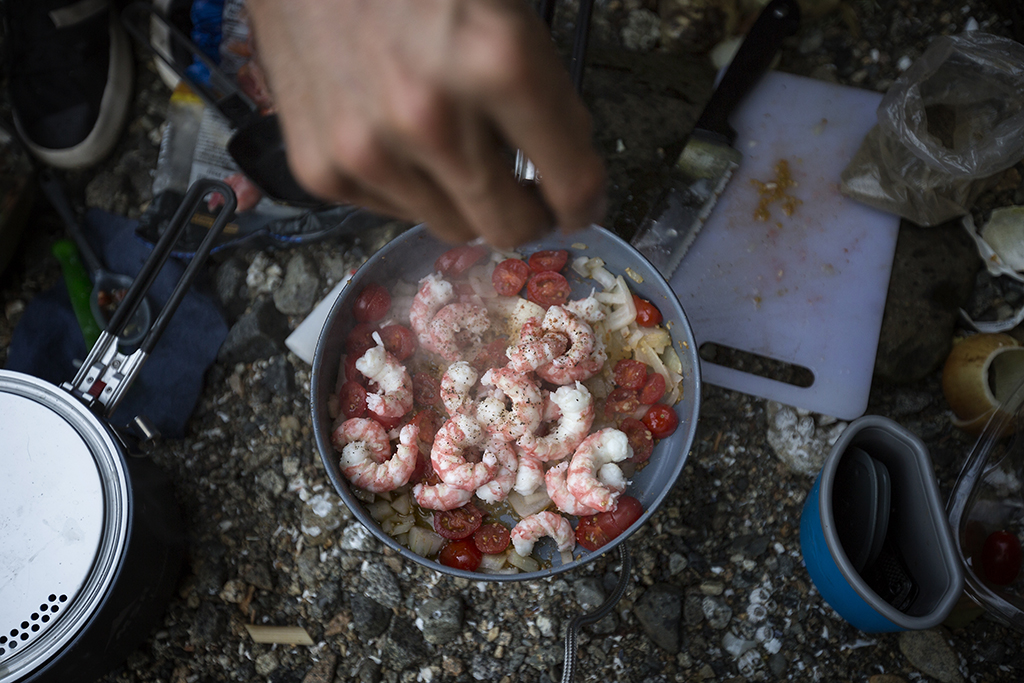 After days of scouting, we made our way to the mainland in hopes of seeing bears. Instead, we found boaters from all over the North American coast. Amid the bustle, the marine owners invited us to camp and join the fun evening potluck dinner. It was the break we needed. Without a fish farm in sight, we finally enjoyed the community spirit and raw beauty of the Great Bear Rainforest.

The next day, we paddled again, eventually encountering the pod of inquisitive dolphins. We laughed, carried on, and slept like rocks that night.

The next morning, we sat at camp gazing on the giant mountains that towered around us. Old roads cut faint lines through the trees. Like many areas of British Columbia, this one had been heavily logged and little old growth remained.

I thought about the potential impact of the fish farms: “Are we doing to the salmon what we did to our forests? Will this magical place go the way of the Great Barrier Reef or the former massive cod fish populations on the east coast of Canada?” These thoughts lingered as we battled currents, winds, and storms, before ending our trip watching humpbacks breach and orcas patrolling the dark cold waters of Johnstone Straight.

The Great Bear Rainforest is one of the world’s most mystic ecological wonders and I hope it remains that way. On June 5, 2019, the Canadian Department of Fisheries and Oceans declared it will begin testing farmed Atlantic Salmon for harmful viruses. Yet promises have been made before, leaving many people skeptical. As outdoor adventurers, we hope others will see the value in keeping the ecosystem of Great Bear Rainforest healthy and vibrant. It’s a critical habitat upon which many rely.