My work is a mix of commercial, adventure and fine art photography. Most of my legitimate adventuring happens on my own time, while the commercial work is often built around synthesized “adventures” that showcase the brand or product being advertised.

But every once in a while with my favorite clients, true adventure and product messaging overlap and I’m able to shoot a commercial assignment that taps into that basic human desire to cast out into the unknown just to see what happens next…

Such was the case when my longtime client Mountain Safety Research asked me to come up with a concept to showcase one of their latest products, the Guardian Purifier. The Guardian is billed as “The World’s Most Advanced Portable Purifier”. Originally developed for the military, the Guardian was designed to reinvent what is possible with a portable water purifier. Using state of the art hollow fiber technology, this product removes viruses, bacteria and protozoa, rendering even the most unappetizing water sources drinkable.

We needed to create images of the product being used in environments ranging from polluted sources in developing nations to suspect water in the backcountry. After a little bit of research, I had landed on Peru as the ultimate environment to put the Guardian through its paces. From the urban landscape of Lima, rural towns like Huaraz, to the amazing backcountry of the Cordillera Blanca Mountain Range, Peru had a whole lot of everything. 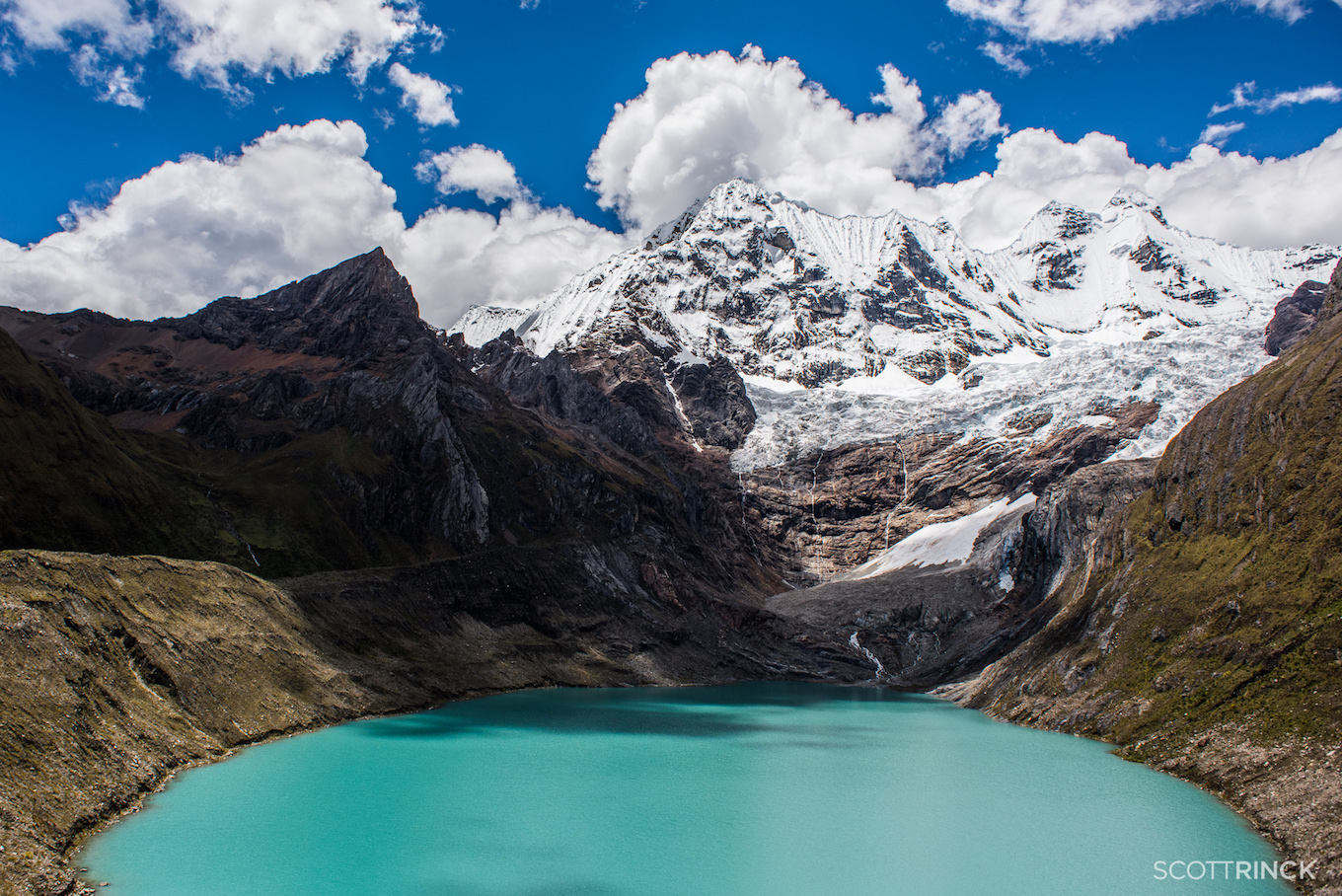 At first I thought I’d just take still images, but soon I came up with an entirely better idea. I dashed off this email to my clients at MSR.

Let’s level this whole thing up a notch.

We’ve got great people involved, we’ve got a great location, we’ve got a great product. The Guardian is not just iterative, it’s game-changing. It deserves not only a great set of images, it also deserves a great narrative and marketing campaign. Dig this:

Let’s organize an actual trek and climb starting and finishing in Huaraz, Peru and covering super wild terrain in the amazing the Cordillera Blanca. We will live by one rule from the time we arrive in Peru to the time we depart: No bottled water. Just the Guardian purifier …and whatever water sources we can find. This will range from garbage-strewn rivers in the city to irrigation canals in farms and rural villages, to creeks and lakes with suspect levels of livestock contamination. Scary but compelling.

Through this, we will create a product story, an adventure story and an environmental sustainability story that will resonate with all travelers who have remorse for the impact they leave as they explore the globe.

Let’s discuss early in the week. Could be very interesting.

Discuss we did, and in less than three weeks, we planned, booked and departed on a Peruvian trip that was high on adventure and ambitious in scope. Just the kind of project that I dreamed of when I started this career many years ago. 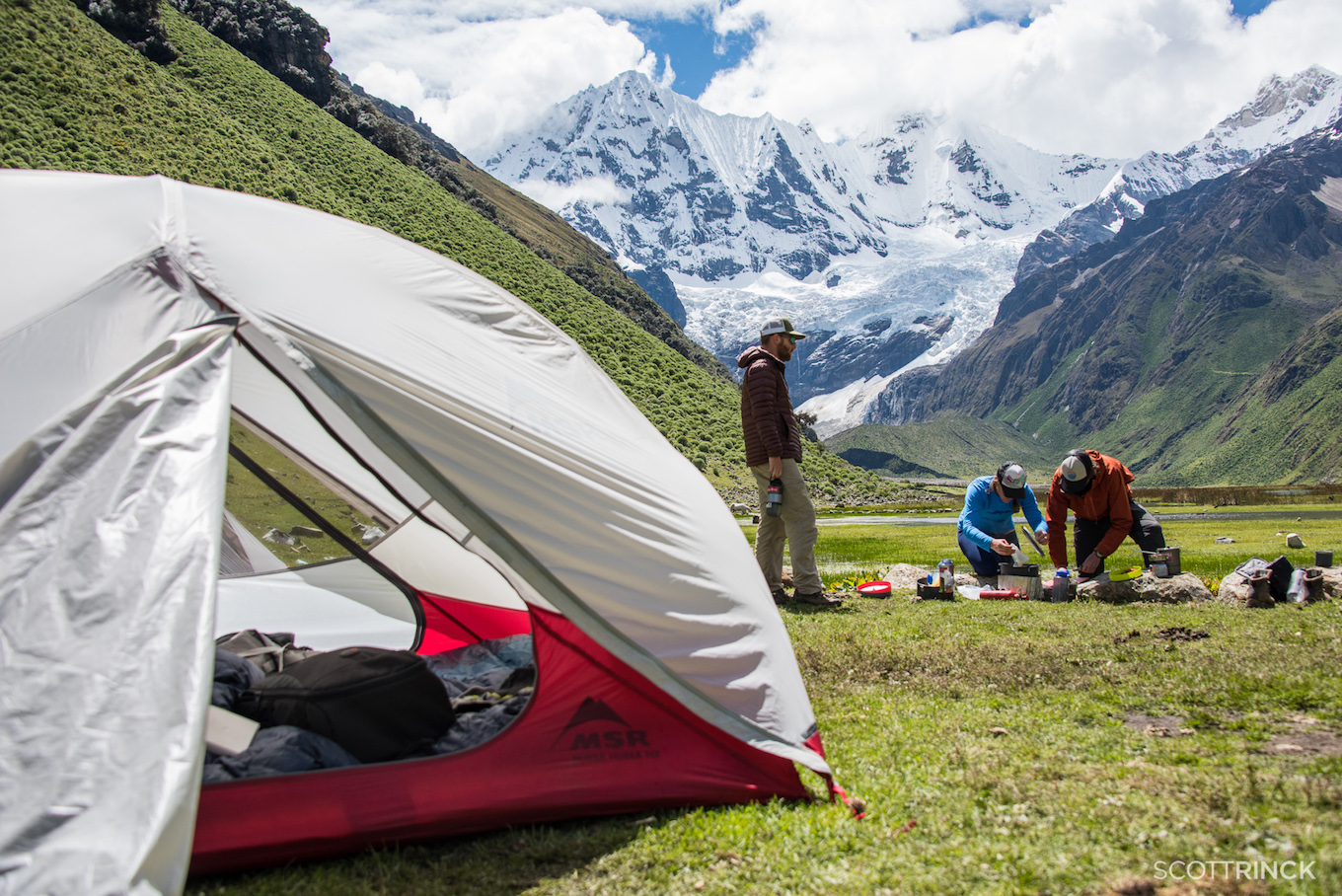 The crew was all-star. Joining me was MSR engineer Steve Schwennsen, whose blood, sweat and tears were integral in the development of the Guardian. We also synced up with the talented adventurer and gear tester Eric Hanson as his 9 month tour of the mountains of South America synced up beautifully with our travel plans. Finally, traveler and designer Lisa Buckley Teigen jumped at the opportunity to leave rainy Seattle behind for a couple of weeks of explorations down south.

Arriving late in the evening in Lima, we were treated to a comedic South American drama as the non-sanctioned taxi driver who had managed to land our business argued with armed police and sanctioned drivers over his right to provide our hotel transportation. In the end, he was chased away, and we were left to find alternate transportation. Much later, having stopped countless times for directions, our replacement driver found our hotel, which was based near the bus station and put us within walking distance of our next objective, the bus to Huaraz.

That first evening at the hotel gave us the first opportunity to break the norm. Instead of buying bottles of water at the corner market, it was time to run some tap water through the Guardian and enjoy the virtues of renewable clean water. Despite the fact that I had been assured by countless MSR employees that this product was all that it promised, it was still honestly nerve-wracking to drink Peruvian tap water. I’ve traveled professionally for years, and a stringent, almost religious adherence to the rule of avoiding the local water had never steered me wrong. But, as Steve, the very engineer who had tested the product through endless cycles, downed a liter of water just purified from the tap, I knew it was time to trust the product and get down to getting hydrated. 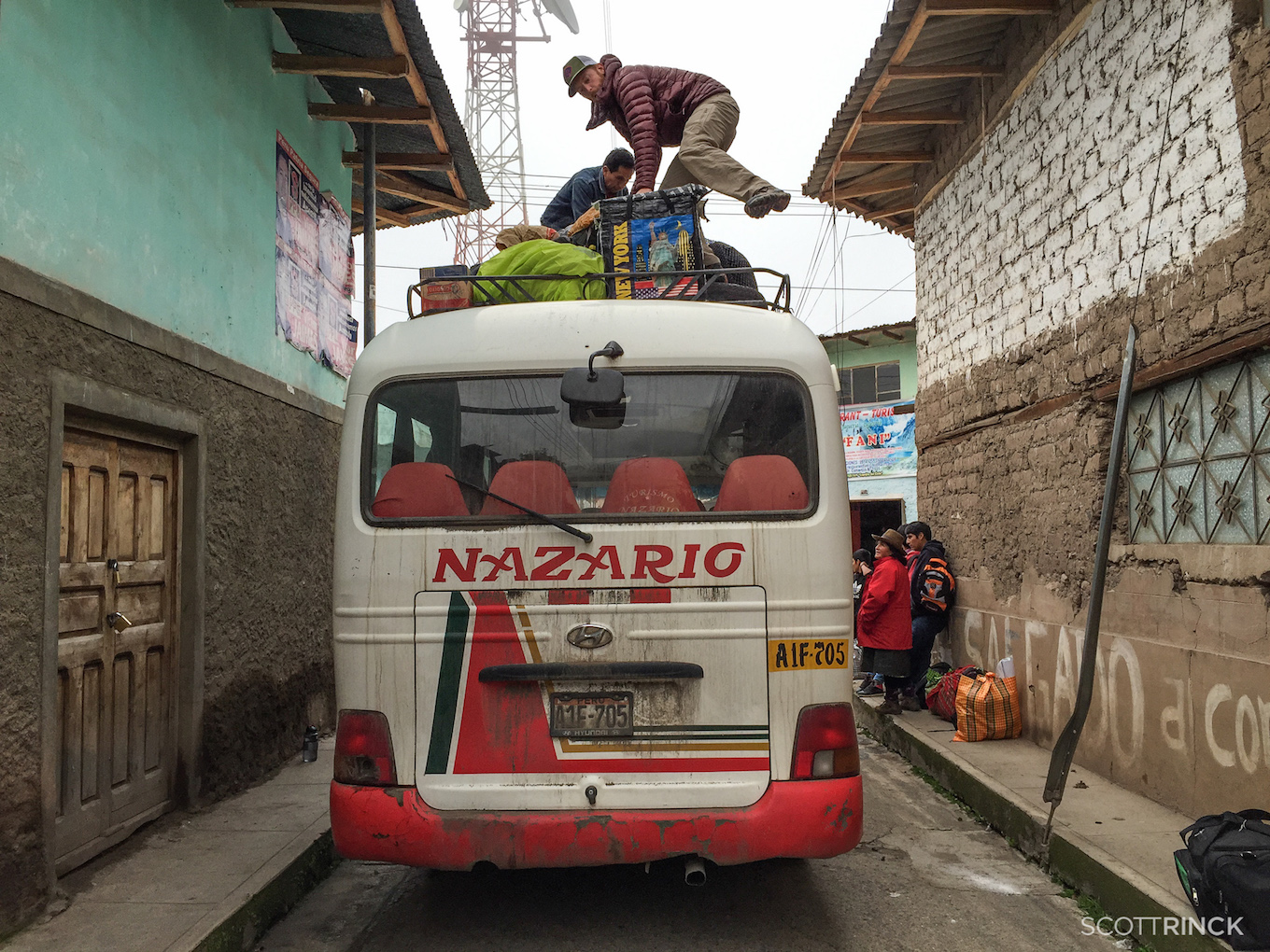 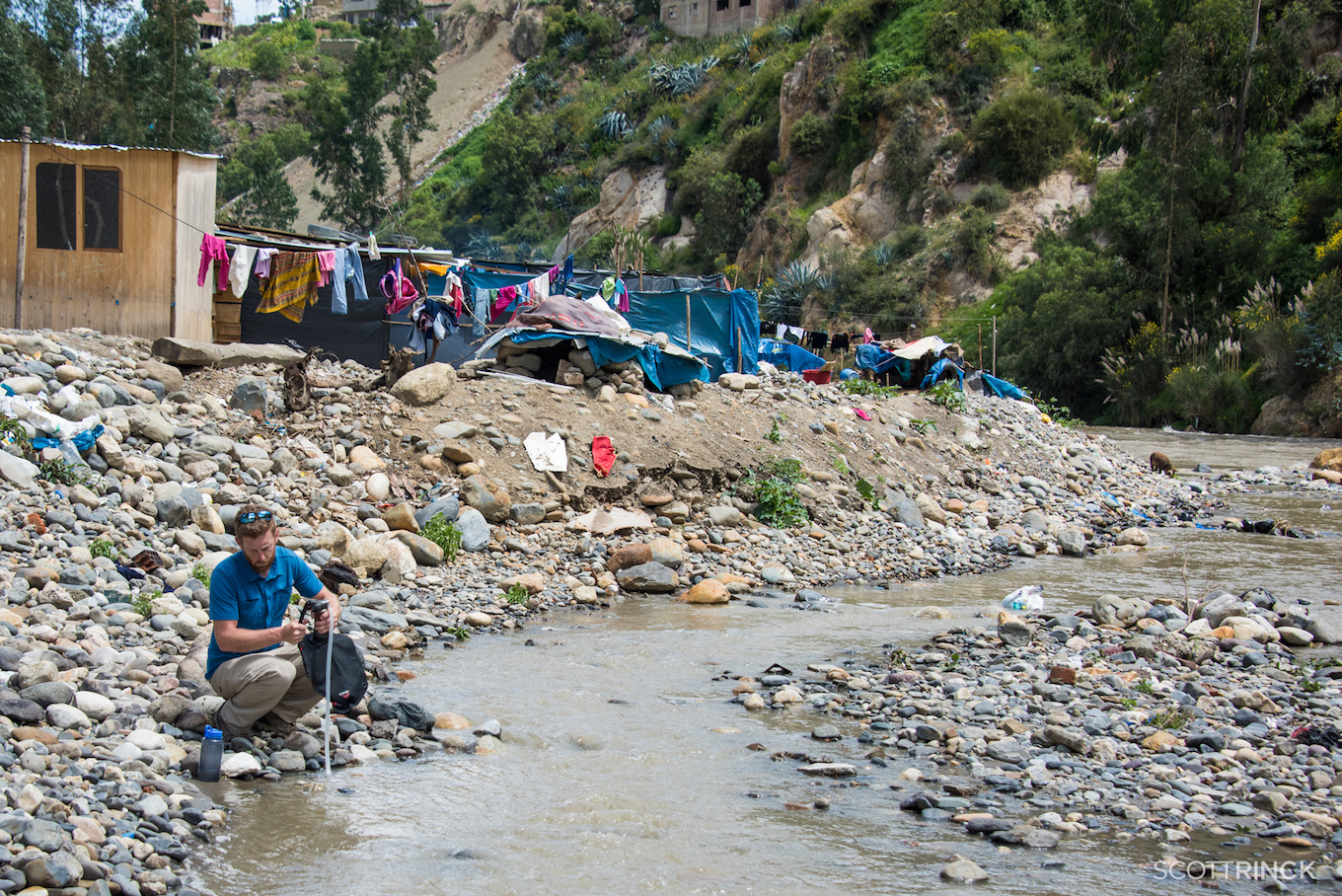 Two days later in Huaraz, we purchased the necessary supplies for the trek and wandered the urban and rural areas searching for water sources of dubious aesthetics in order to better illustrate the performance of the Guardian. As we were shooting images of Eric purifying water from a river that runs through the center of town, an aged Peruvian woman clambered down from the bridge, lifted her skirts and took care of her business directly into the river from which we were treating our water. Perfect. 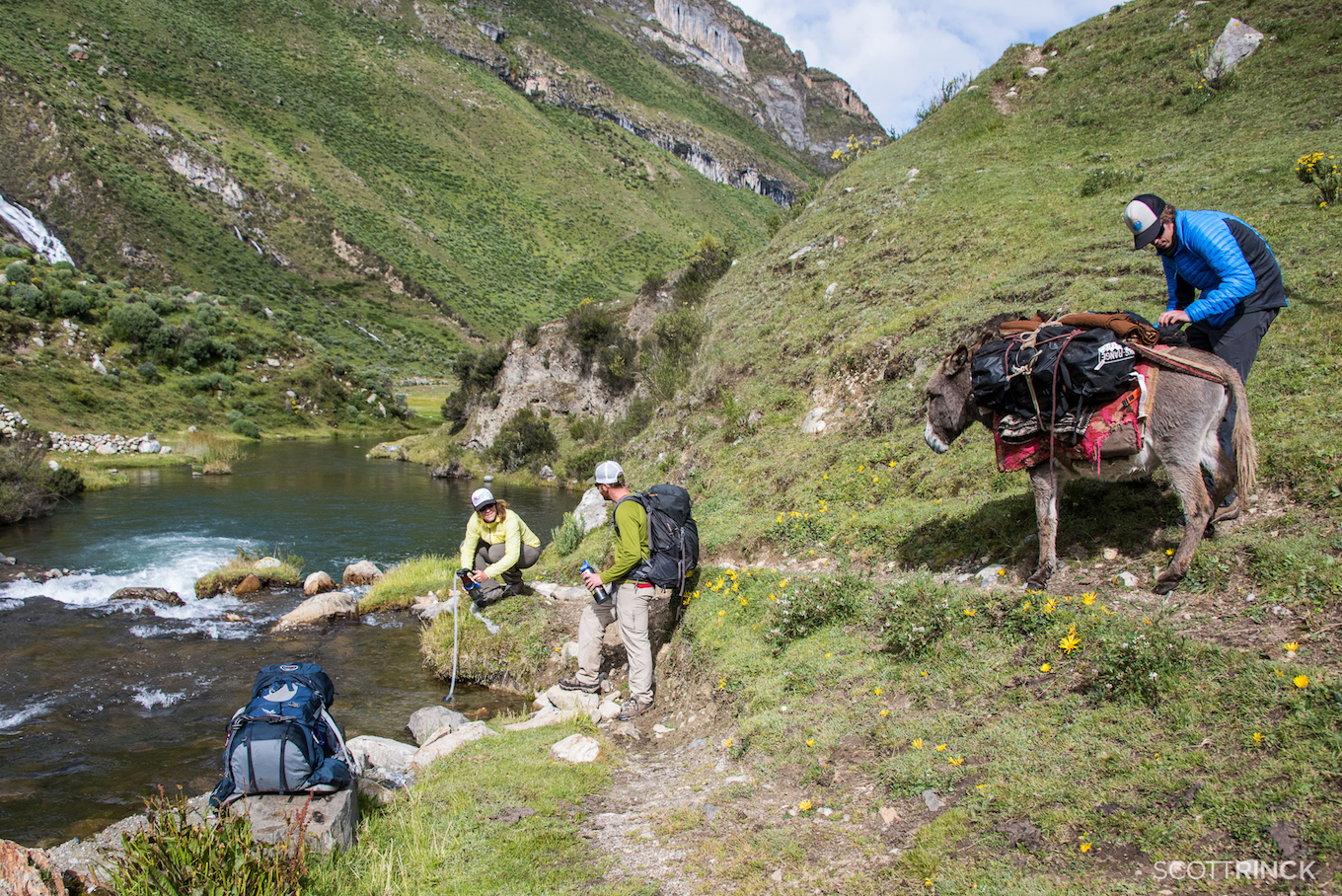 Things didn’t get weird again until we were three hours into the first day of the Huayhuash Trek, a week-long circuit that traverses the lakes, valleys and mountain passes among some of the most breathtaking and fierce mountains this side of the Himalaya. We had set out with the four of us, a hired arriero (burro master), two burros and a horse. As we reached our lunch spot, we were informed that the youngest burro was in training, and had proven himself unfit. Our de facto guide left us with a single burro burdened with the entirety of the payload, and instructed us to keep walking straight until we found the camp; he would ride back over the mountains with his horse, dog and the failed burro, planning to regroup with us the following morning. Thus began the crash course in burro management that climaxed the next morning with Eric walking 10 miles in search of the animal, which had chosen to bolt in the night. 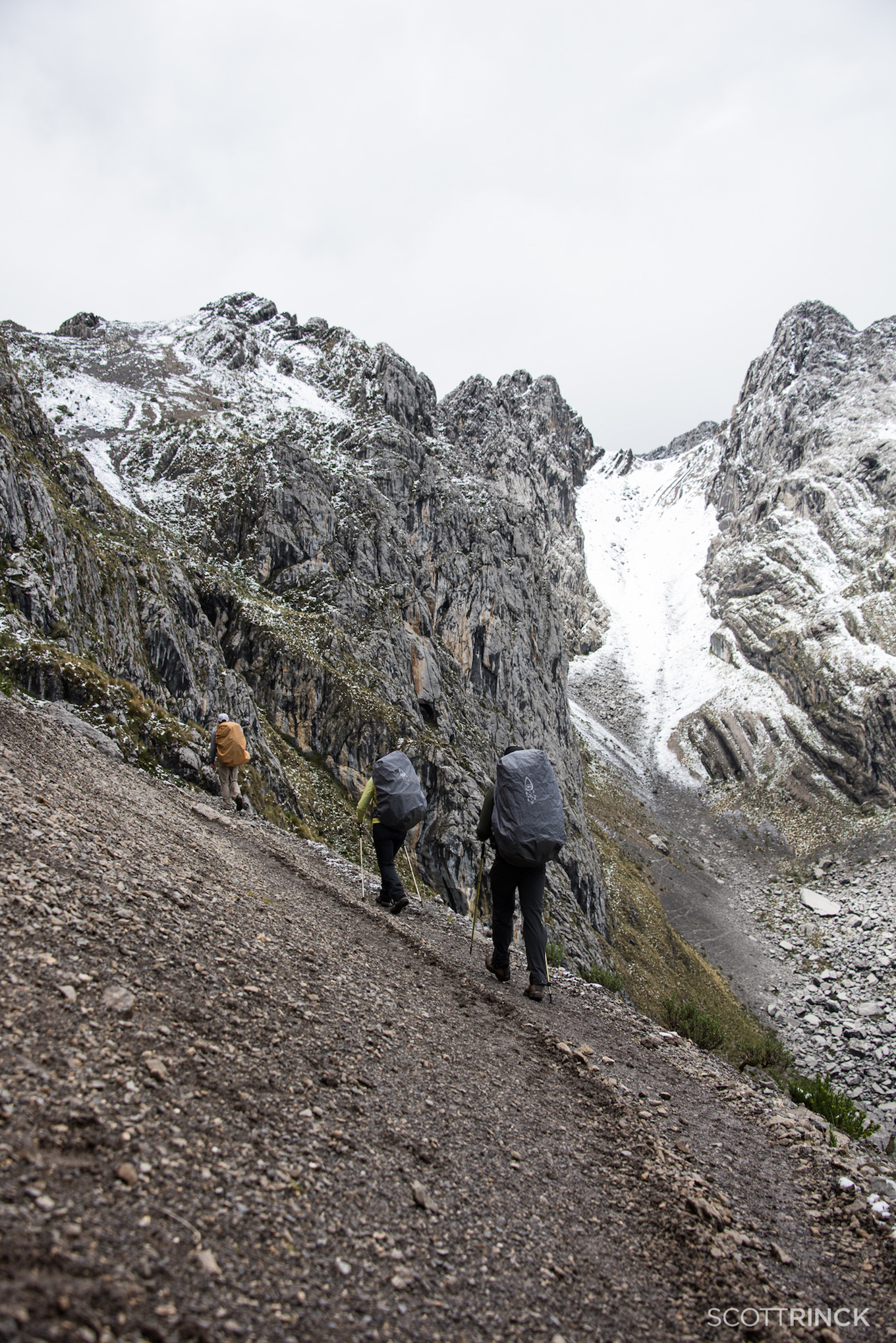 Later that morning, we tested the theory that we, being of reasonable fitness, could arrive from sea level with little or no altitude training and instantly attack mountain passes perched higher than the summit of Mt. Rainier. I’m not going to name any names, but there was some vomit left on that mountain, and headaches all around. To fix the problem, the prescription is to descend and hydrate. On the backside of the mountain pass we found some relief and a trickle of muddy rainwater, which the Guardian made crystal clear with ease. 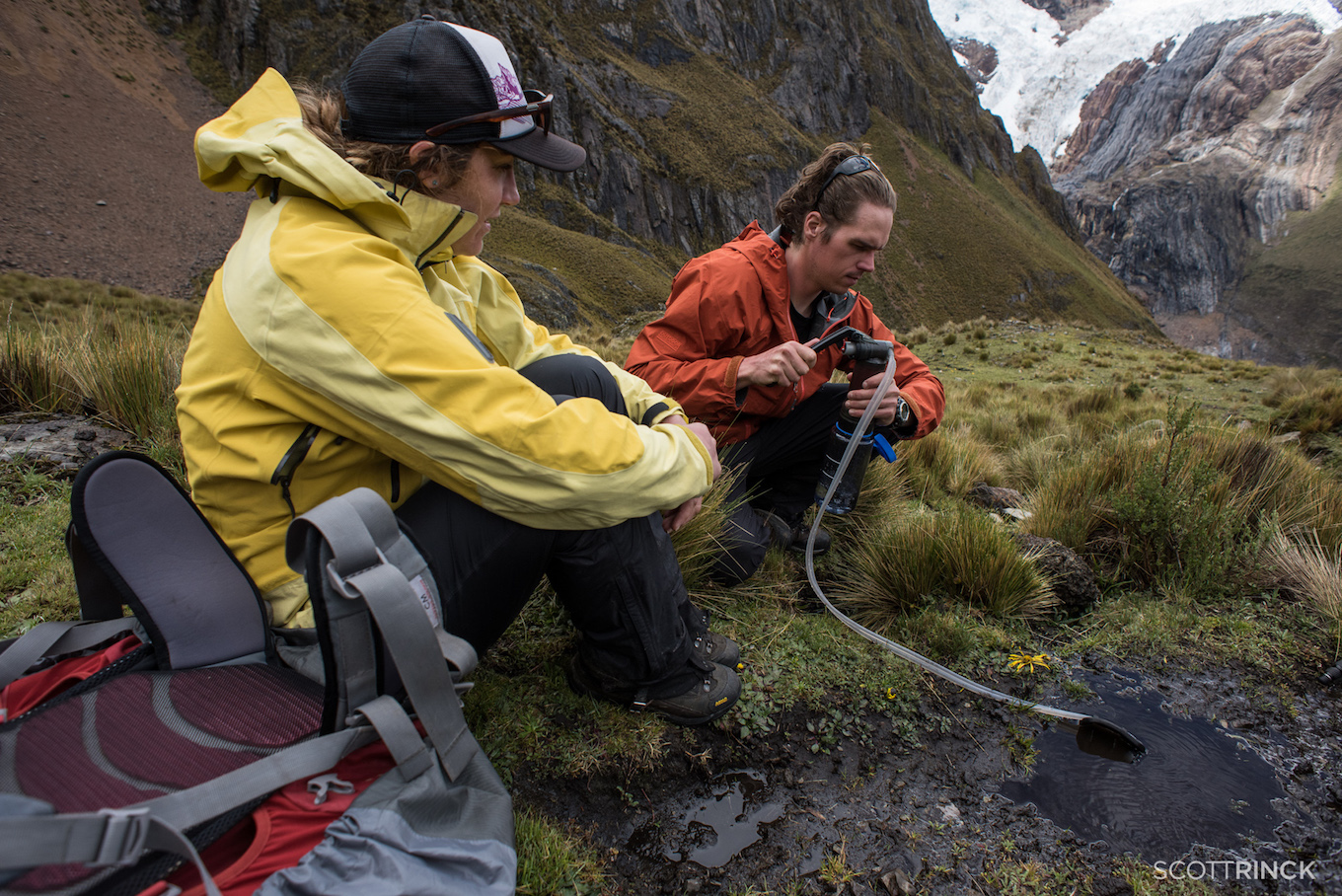 Before we knew it, we had been in Peru for a week, and had produced drinkable water from hotel sinks, swampy marshes, garbage strewn rivers, livestock polluted canals, mud puddles and pristine mountain streams. There was still another week of travel to experience, and many scenes still to shoot, but the act of purifying the water had become second nature, and the sources, no matter the gross factor, had become uneventful. 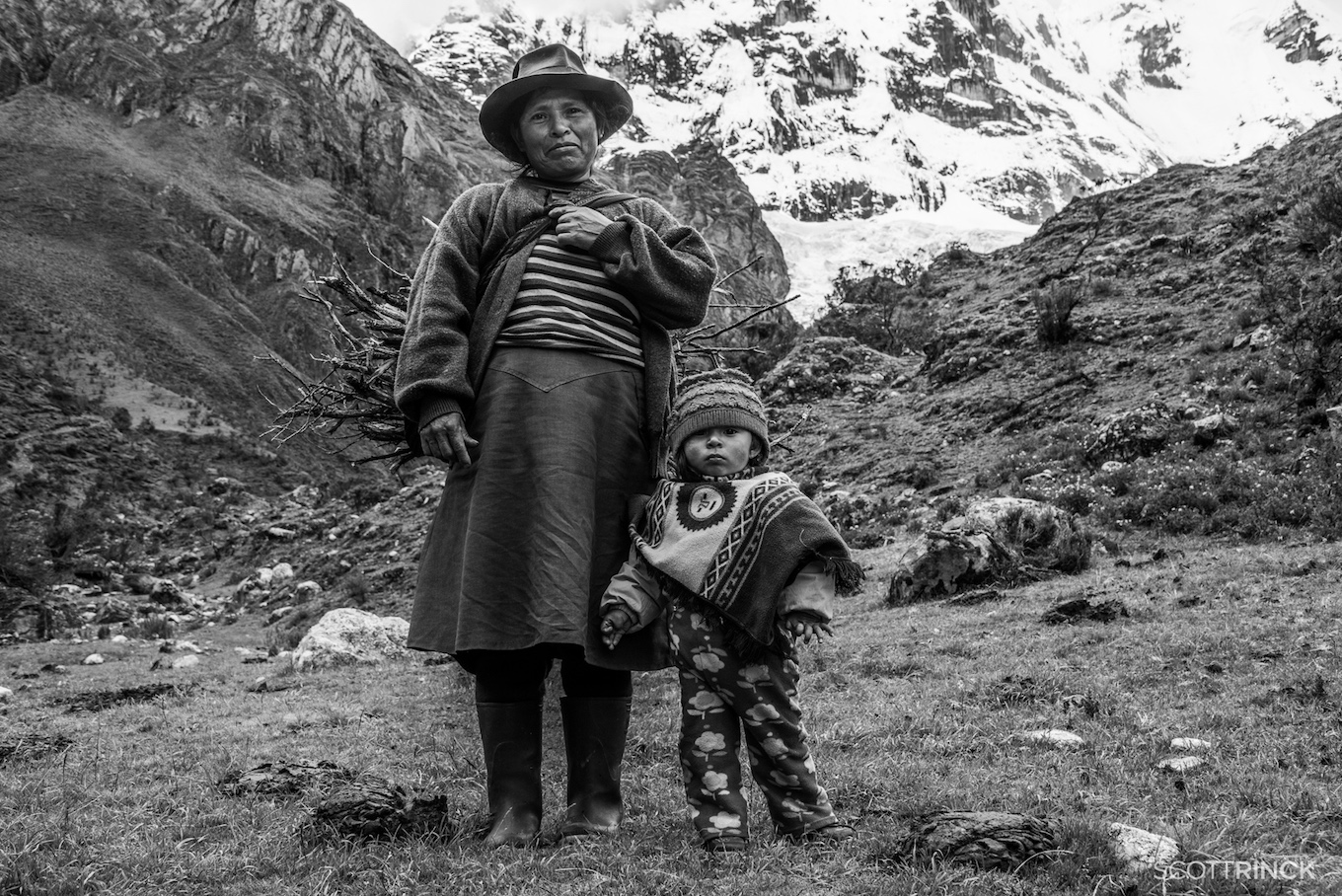 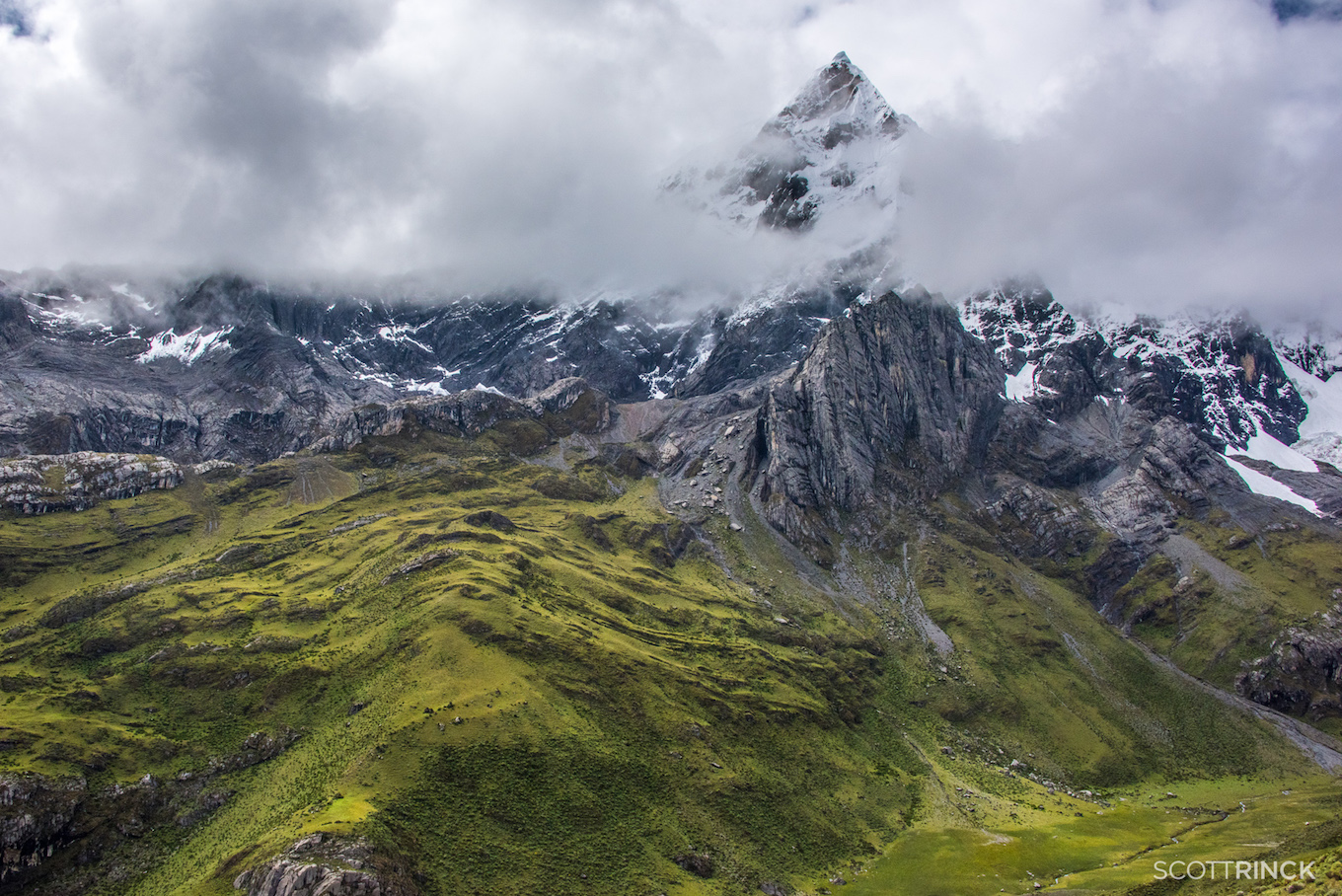 We ranged about the mountains of the Cordillera Blanca, crossing high passes, swimming in mountain lakes, eating fresh trout, meeting the local farmers and shepherds, sleeping under the stars and shooting time lapses of the incredible ever-changing weather. It was at that point that I realized exactly how amazing this project was. The fact that we were no longer concerned about the water process and could just concentrate on the adventure at hand meant that we had turned a corner with our travel mentality. It no longer felt like a work assignment, it felt like an opportunity to open our eyes and our minds to the infinite new sights, sounds, and sensations that come with exploring a new and wonderful part of the world. 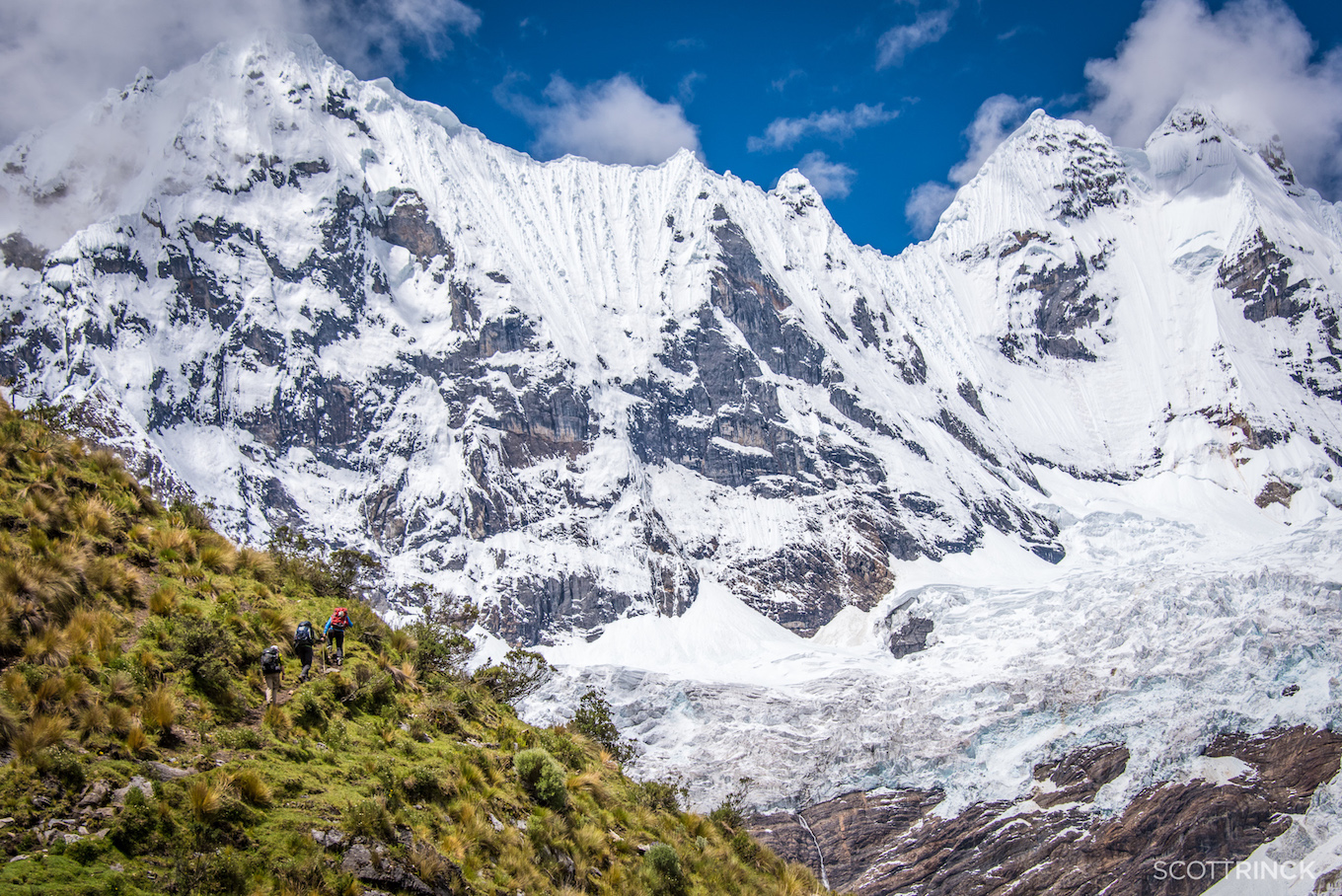 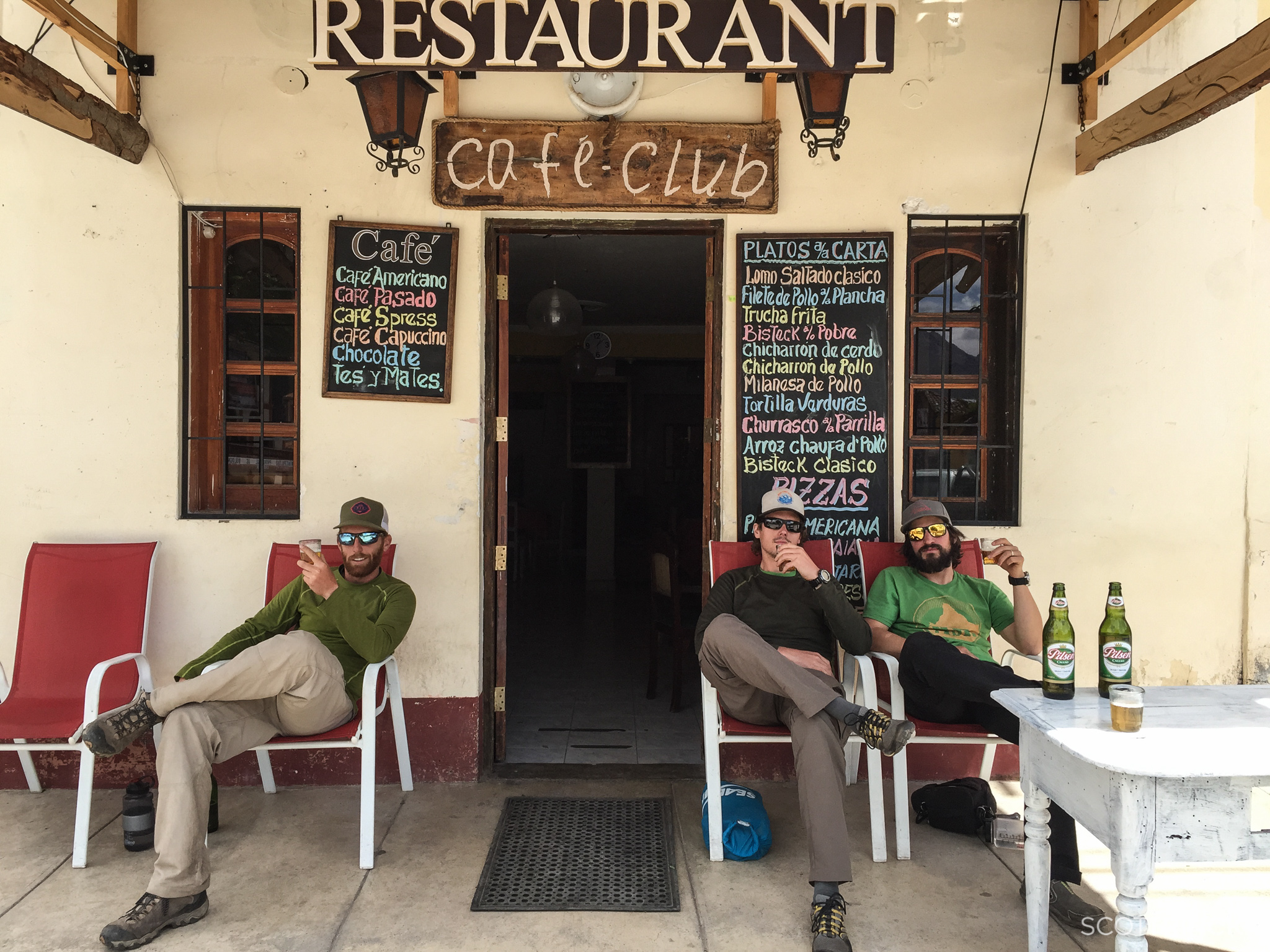 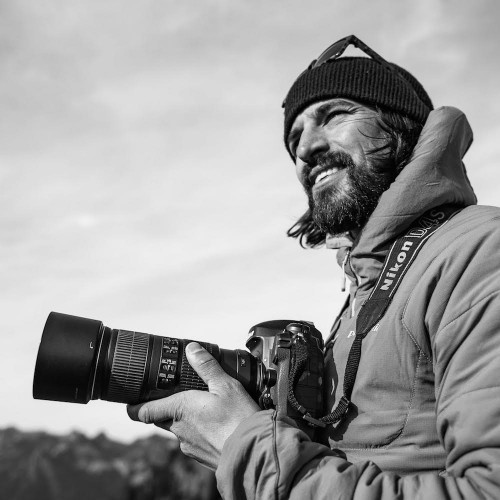 Author: Scott Rinckenberger is a Seattle based fine art landscape and adventure photographer specializing in capturing the most pristine and wild places his legs will carry him. Scott’s work has been featured in art exhibitions worldwide, and Scott has appeared widely in the North American media both as a photographer and as an outdoor athlete. Scott’s clients include MSR, REI, Apple, Patagonia, Powder and Outside.