Story and Photos by Tara Alan

As much as I love the invigorating excitement of trying new flavors as I travel, sometimes what I really want are the familiar and comforting dishes of home.  It doesn’t matter where I am, or how long I’ve been on the road, I’m bound to get homesick for good ol’ American food once in a while. When my husband Tyler and I were cycling through France, three months into a two-year bicycle tour, we experienced just that. 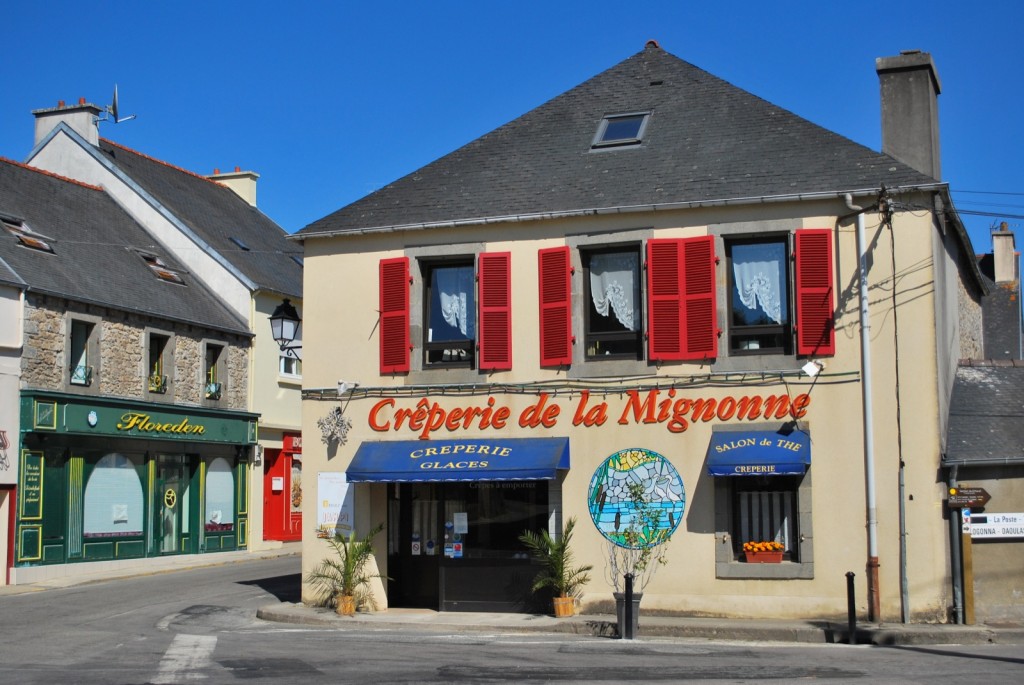 Nevermind the fact that we were in one of the most gourmet countries in the world, home to escargot and fois gras and a dizzyingly delicious array of artisanal charcuterie.  Nevermind the fact we could eat crusty loaves of bread any time we wished, could gorge ourselves on delicious smelly cheeses, and could delight in the sheer bliss of a buttery, shatteringly flaky croissant. 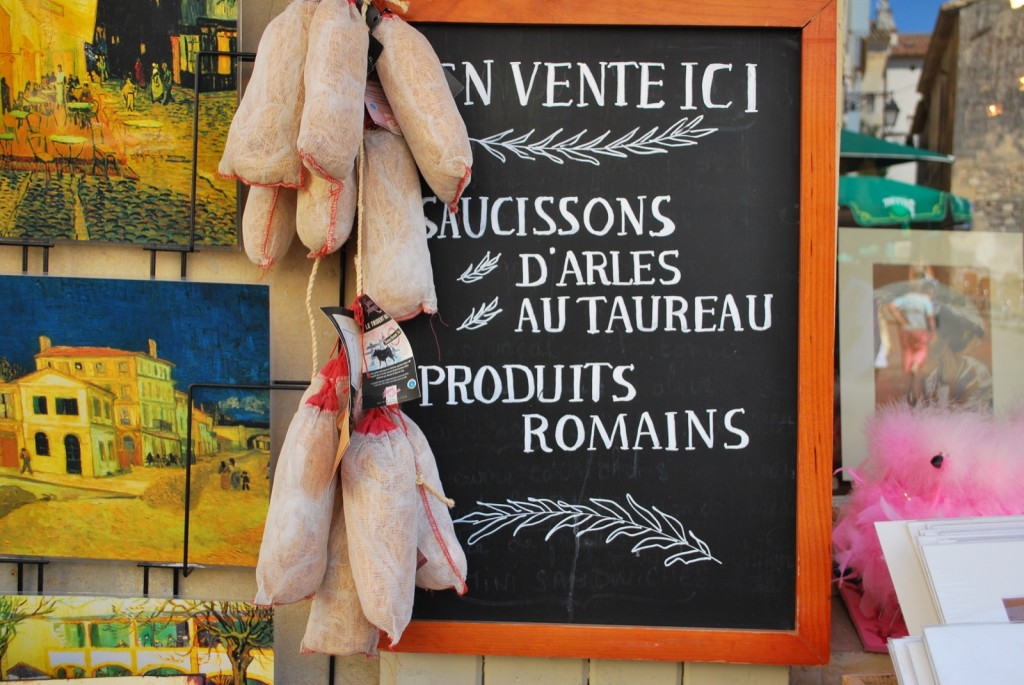 Nope, we were craving the low-brow foods of American greasy spoons and state fairs. As we cycled, visions of thick, chocolate milkshakes danced through our heads. Plates of chili cheese fries, oozing with melted cheddar and seeping with glistening grease. Deep-fried cheese curds. Ice cream sundaes. And most especially, chicken fingers.  It didn’t matter that we rarely ate such dishes at home—the crunchy, craggy, golden deep-fried pieces of juicy chicken became an obsession as we pedaled and worked up an appetite. 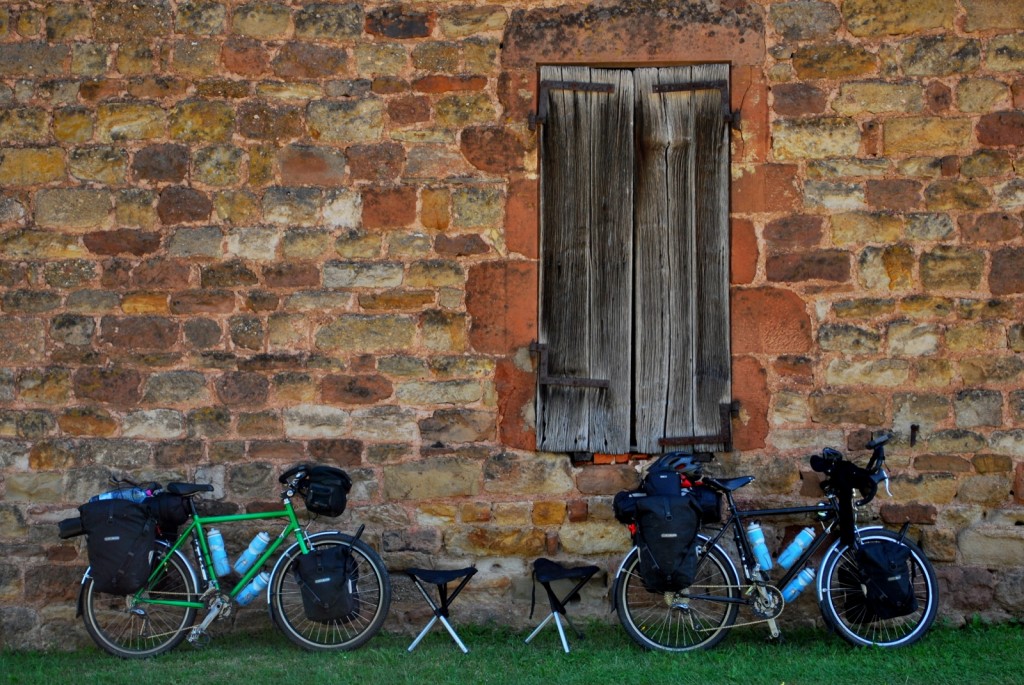 It was thus that I decided to make chicken fingers one evening when we were camped at one of France’s ubiquitous municipal campsites. We’d just purchased a rotisserie chicken from the supermarket before camping for the night, so I decided to work with it instead of trying to tackle the mess of raw meat. I pulled the poulet apart into large, bone-free chunks, and set them aside in a bowl.

Then, I whipped up a quick seasoned flour mixture in which to dredge the chicken. (Dredging means to coat a piece of food in a flour or breadcrumb mixture before cooking. This is how we get deliciously breaded fried food, such as mozzarella sticks and tempura.) This consisted of flour, salt, pepper, and a tiny bit of fiery cayenne pepper.

After I’d coated the chicken as best I could with my flour mixture, I lit my WhisperLite stove and heated a bit of oil and butter in a pan. A few minutes of frying later, and we were in business. Served with ketchup, these rustic, impromptu chicken fingers were just the thing to quell our cravings and make us feel, if only for a few minutes, that we were back in the comfort of home. 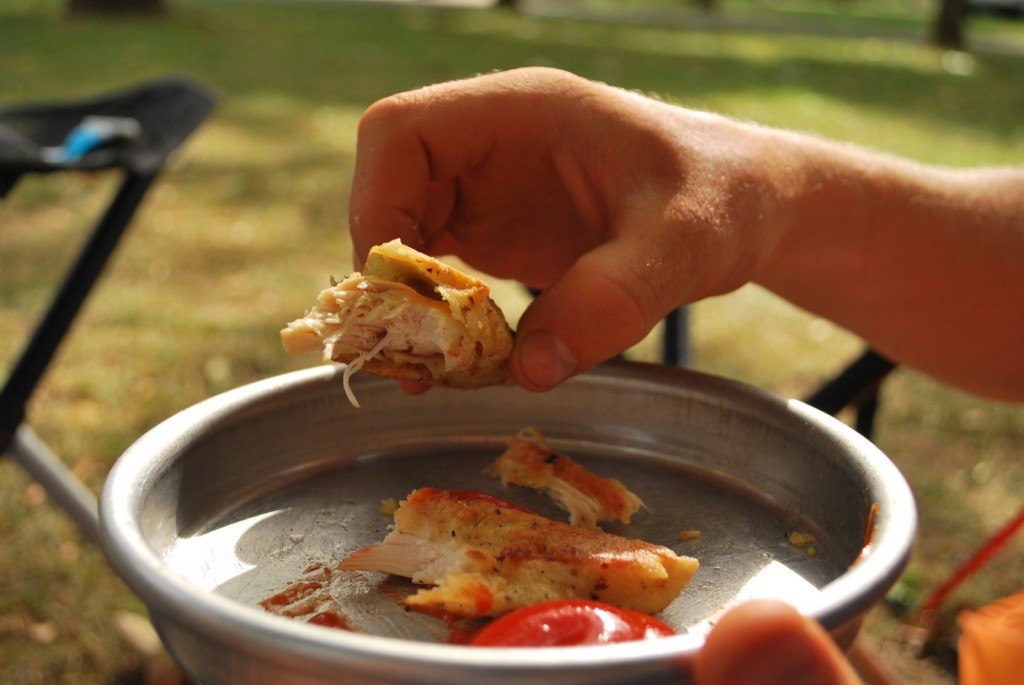 Let me warn you right now: This recipe is not for the faint of heart, nor is it for the lazy camper. It’s not a one-pot-meal, and it’s certainly not the kind of thing you can make ahead of time, and then mix with water on the road. It isn’t practical, nor is it particularly healthy. And clean-up isn’t a breeze either.

However, this recipe is a delicious extravagance, a delectable balm for desperate travelers. It’s what you should make when you’ve been on the road for weeks or months or years on end, and could use, just for a day, a bit of familiar comfort instead of the exotic excitement of something new. Yes, the project is greasy and messy, but it will be worth it, I promise. When you’re done cooking, and you have before you a plate of crusty breaded chicken pieces, you’ll collapse and close your eyes and taste one. Then you’ll let out a satisfied sigh, and all will be right in your world.

Olive oil and butter for frying (about two tablespoons of each)

Gently tear the chicken meat into pieces in your small pot. (Don’t bother with the drumsticks—just eat those as-is.) You’ll get several pieces large enough to be “chicken fingers” and the rest will be more in the realm of chicken nuggets. That’s okay. They’ll still taste amazing by the time you’re done with them.

Add the cup of water to the chicken, and toss the pieces around with your hand for a moment so that all of the chicken is wet. This may look strange, and it is, but trust me: the water is the glue that will make sure the coating adheres to the chicken.

In a separate bowl, mix up the flour, salt, pepper, and optional cayenne pepper. 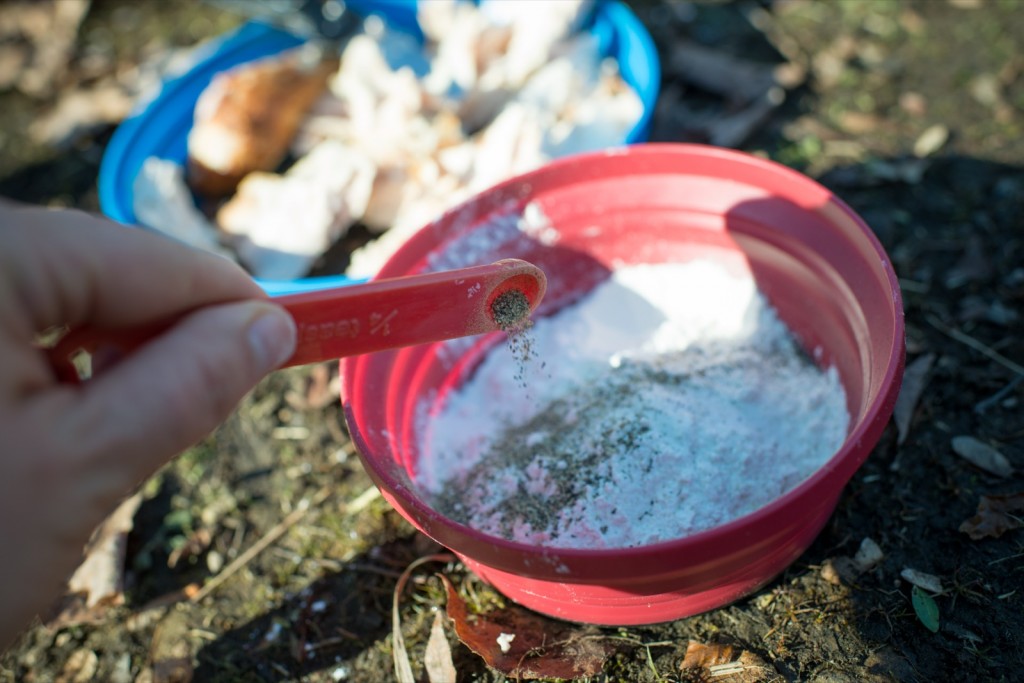 Take a piece of wet chicken, and drop it in the bowl of flour. Roll it around until the chicken is coated. For an extra-thick crusty coating, dip it back into the water, and then back into the flour a second time. Repeat this dredging process with half of the chicken pieces. Your fingers will also become coated with a sticky, gooey flour mixture. Roll with it, or wipe them in the grass to keep clean. 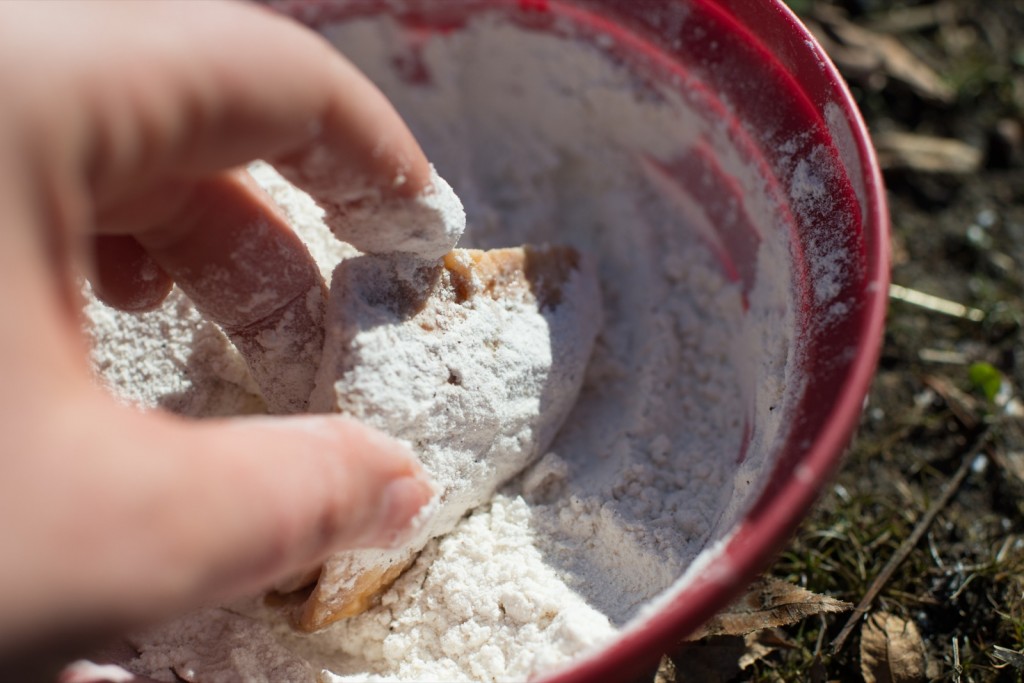 Prime and light your MSR WhisperLite or MSR DragonFly stove, and turn it to a medium flame. To your MSR Flex Skillet, add a generous tablespoon each of butter and olive oil. Heat until the butter is melted and sizzling. Add a few pieces of chicken, making sure they each have room to cook, and aren’t too crowded. (It’s better to fry in smaller batches than larger ones.) 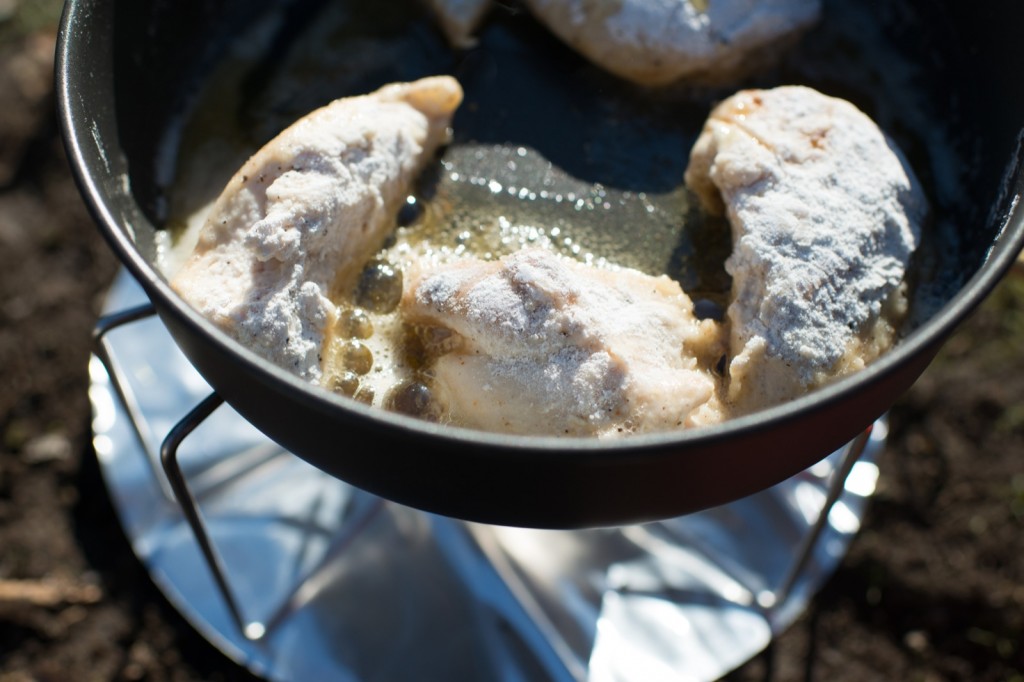 Fry for a few minutes until the undersides are golden, then flip the chicken pieces with a wooden spoon or spatula. Add a bit more oil or butter if there isn’t enough in the pan to keep the chicken sizzling. When the chicken fingers are golden brown on all sides, transfer them to a plate.

Repeat the dredging and frying process for one or two more batches, until all of the chicken is coated and cooked.  Each time you fry a batch, bits of flour will burn in the pan, turning the oil an icky dark color. If it gets really bad, scrape the pan between batches, adding new butter and oil.

When everything is cooked, swipe the crusty fried chicken fingers in ketchup, barbecue sauce, or a simple honey-mustard dressing, and devour. 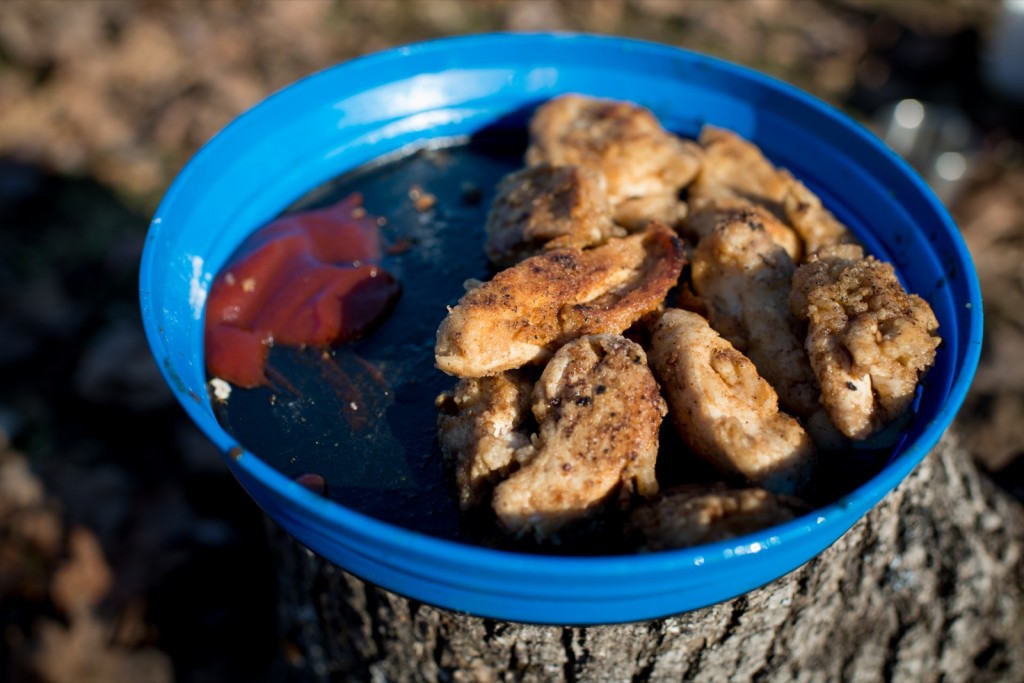 The same breading method used in this recipe works for mozzarella sticks, too! Simply cut a block of cheese into large carrot-stick sized pieces. Dip them in water, and then dredge them in the seasoned flour mixture. Fry on each side until the coating has browned, and the cheese is melty.  Paired with a simple marinara sauce, these cheese sticks really hit the spot, too! 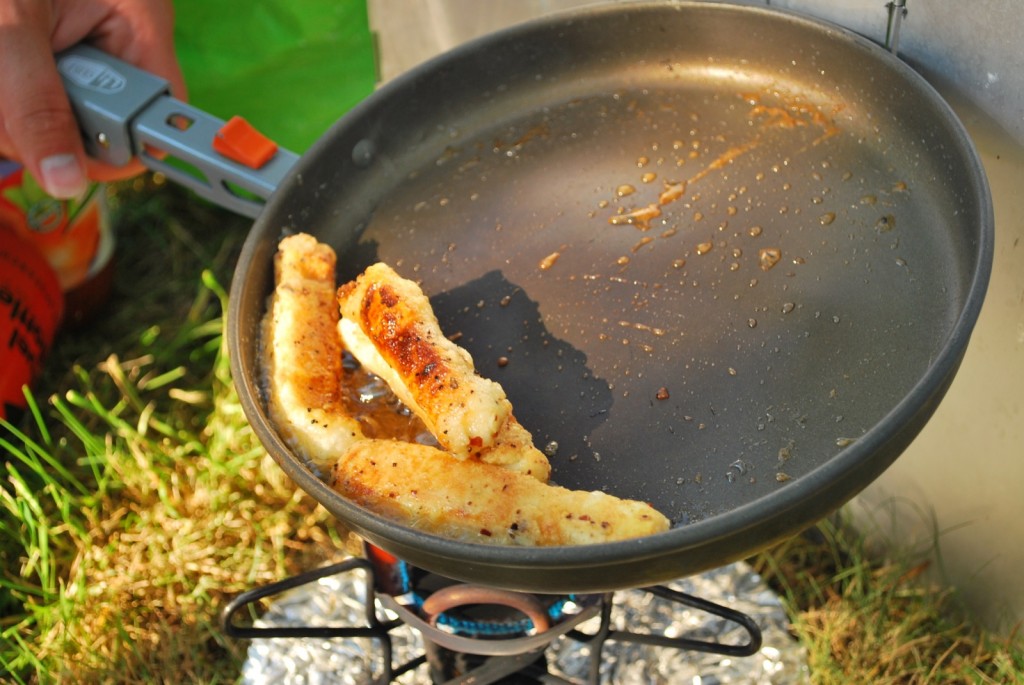 Tara Alan is an Avid cyclist, adventurer, camp cook, and Writer of Bike Camp Cook and of the award winning website goingslowly.com