Despite the popularity of small, canister-fuel stoves, liquid fuels are still the best option for many people due to their unrivaled cold weather performance, low cost, lower environmental impact, and worldwide availability. But which of the many liquid fuels should you use?  If you have a multi-fuel stove like the MSR XGK-EX, DragonFly, or WhisperLite Universal, you have several fuel options to choose from.  Depending on where in the world you plan to use your stove, the options may vary from what you’re used to at home. Here, we’ll give you the pros and cons of the most common liquid fuels.

White gas (aka “naphtha,” “100% light hydro treated distillate,” or “Coleman Fuel”) is the first choice for most people in North America whether they’re headed out for a summer weekend or for a month-long winter expedition in the Alaska Range. Almost any pressurized-type liquid fuel stove will run well on white gas. Because this fuel burns cleaner than most others and because it evaporates (vaporizes) at a lower temperature, it makes starting your stove an easier, cleaner, and overall more pleasant experience. It also won’t leave as much of a nasty residue or odor if you have a spill.

You might hear white gas referred to generically as “Coleman Fuel”. Not all brands are identical, but any stove that runs on white gas should burn Coleman fuel without issue. MSR offers a unique blend of white gas called SuperFuel. It is more refined and burns cleaner than almost any other white gas on the market. It is free of additives and so reduces fuel line clogs and other stove maintenance.

Unless you’re going through gallons of fuel, it is best to buy white gas in smaller containers, like MSR SuperFuel. Once you open the container and expose it to air, the fuel starts to degrade. If you don’t get out that often, a gallon container of Coleman fuel will degrade and possibly build up shellac that will clog your stove or stove pump filters.

Although white gas is similar to automotive gasoline, these two fuels are quite different and are not necessarily interchangeable.

Kerosene
The World Traveler’s choice, you’ll be able to find kerosene in even the most remote corners of the globe. It’s inexpensive and widely available, but it is also dirty, stinky, and more difficult to light. It can be highly variable—something labeled “kerosene” in Canada is likely to differ a lot in quality and performance from “kerosene” in Bangladesh. Fuels in some parts of the world are dirtier and less refined than elsewhere. Be sure you’re familiar with the maintenance procedures for your particular stove—there’s a good chance the fuel you bought from a local merchant on the side of the road out of an old oil drum will burn dirtier than you expected, and will clog your stove faster than you’d like.

Diesel
Some love it, most hate it. Diesel is very dirty, has a strong and pervasive odor, is difficult to light, and is more likely to cause your stove to flare up. But it is also inexpensive and requires less energy to refine from crude oil, so it has a positive environmental story to be told. Several multi-fuel stoves that will run white gas and kerosene will not run diesel, however, so be sure to check the manufacturer’s approved fuel types before you find yourself twenty miles from the nearest road with a fuel you can’t use.

Automotive Gasoline (petrol)
Consider this a fuel of last resort. As stated above, most stoves capable of burning white gas can also burn gasoline, but this fuel has some downsides of which you’ll want to beware. Gasoline contains additives designed to make car engines run smoother, but these additives can harm the seals in your stove’s pump and fuel line, making them harder and more prone to leaking. Gasoline will also produce more smoke and fumes than white gas. Further, what you buy at the pump might have upwards of 25% ethanol mixed in. Ethanol is an alcohol; in low percentage mixtures it may not make a big difference in how your stove burns, but it can cause pitting corrosion in aluminum fuel bottles. If you do use gasoline with ethanol, don’t leave it in your fuel bottle for long-term storage.

Contrary to popular belief it’s usually best to buy the lowest grade of auto gas, not the highest. Lower grades have fewer additives and therefore often behave better in backpacking stoves where we are superheating the fuel. This superheating causes additives and impurities to clog the fuel line and jet. Also, auto gas varies since the additives and mixture changes regionally as well as seasonally. So the gas you buy in Colorado in winter is different than what you get in the summer and is different again from what you might find in Arizona or California.

Denatured Alcohol
Go to most any backpacking blog, and you’re likely to hear about denatured alcohol as a cooking fuel. Some ultralight backpacking enthusiasts build their own alcohol burners and use them successfully. We’ll discuss the pros and cons of these stoves in a separate article. It’s important to note that most pressurized-type liquid fuel backpacking stoves will not operate safely on alcohol. Again, read those manuals.

Alternative liquid fuels
There are many other fuels out there, some of which could get you by in a pinch and some of which probably won’t work at all. Some fuels like certain grades of aviation gasoline (“avgas”) and jet fuel are similar to more common fuels like automotive gasoline (often with lead additive) or kerosene, and may work okay in your stove. Other fuels, such as some grades of biodiesel or pure plant oils, are less likely to give you a good experience. Most manufacturers do not suggest using these alternative fuels, but you can read about the experiences others have had with a quick online search.

For a list of liquid fuel names in foreign languages, take a look at Fuel Tables by Country . 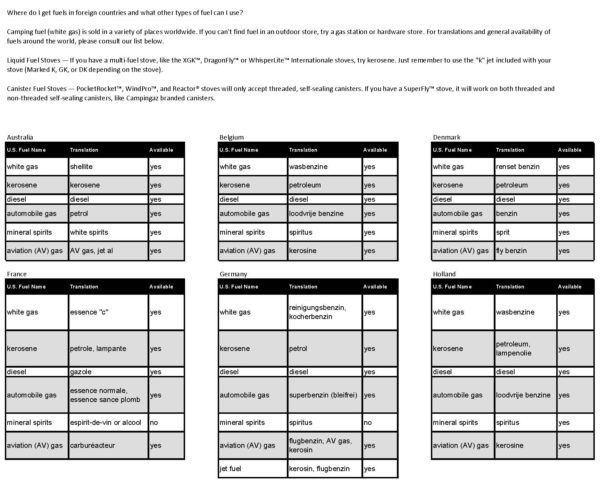 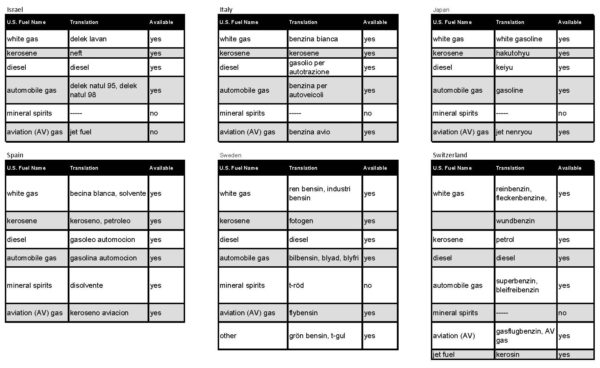