Story and Photography by Joe Yelverton

The 46-year-old geophysicist illustrates his point. “When I go to Mexico I understand what people are saying, and when they ask me a question I understand, but the problem is not knowing the language well enough to answer.”

“The various scientific disciplines are similar,” O’Neel says. “We get each other but we don’t know how to communicate very well.” 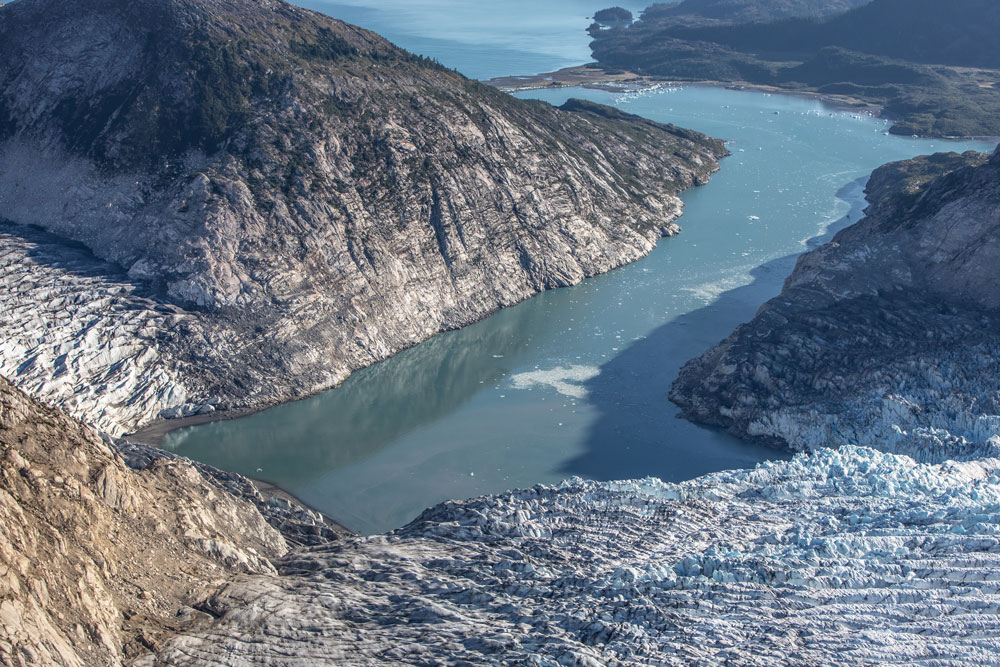 Far from the warm sun of Mexico, in September of 2018 I joined O’Neel and his team of three other geophysicists as they studied the Wolverine Glacier on the Kenai Peninsula in Alaska. Selected by USGS in 1966, Wolverine is referred to as a “benchmark glacier,” meaning its qualities are representative of other important glaciers in the region, an enormous area that encompasses nearly seven million acres, known as Chugach National Forest. 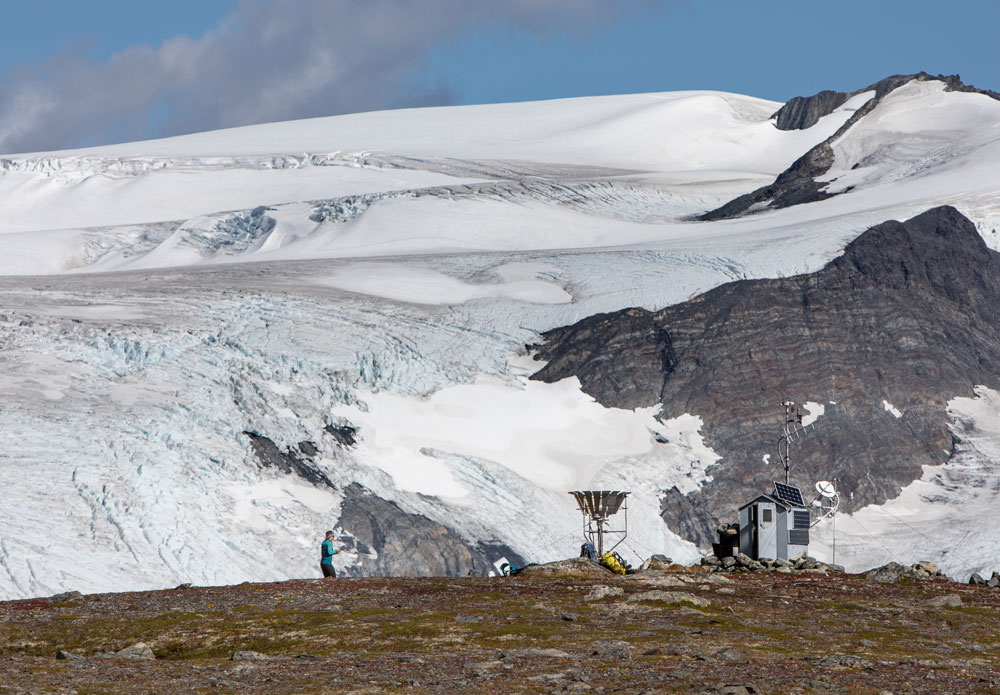 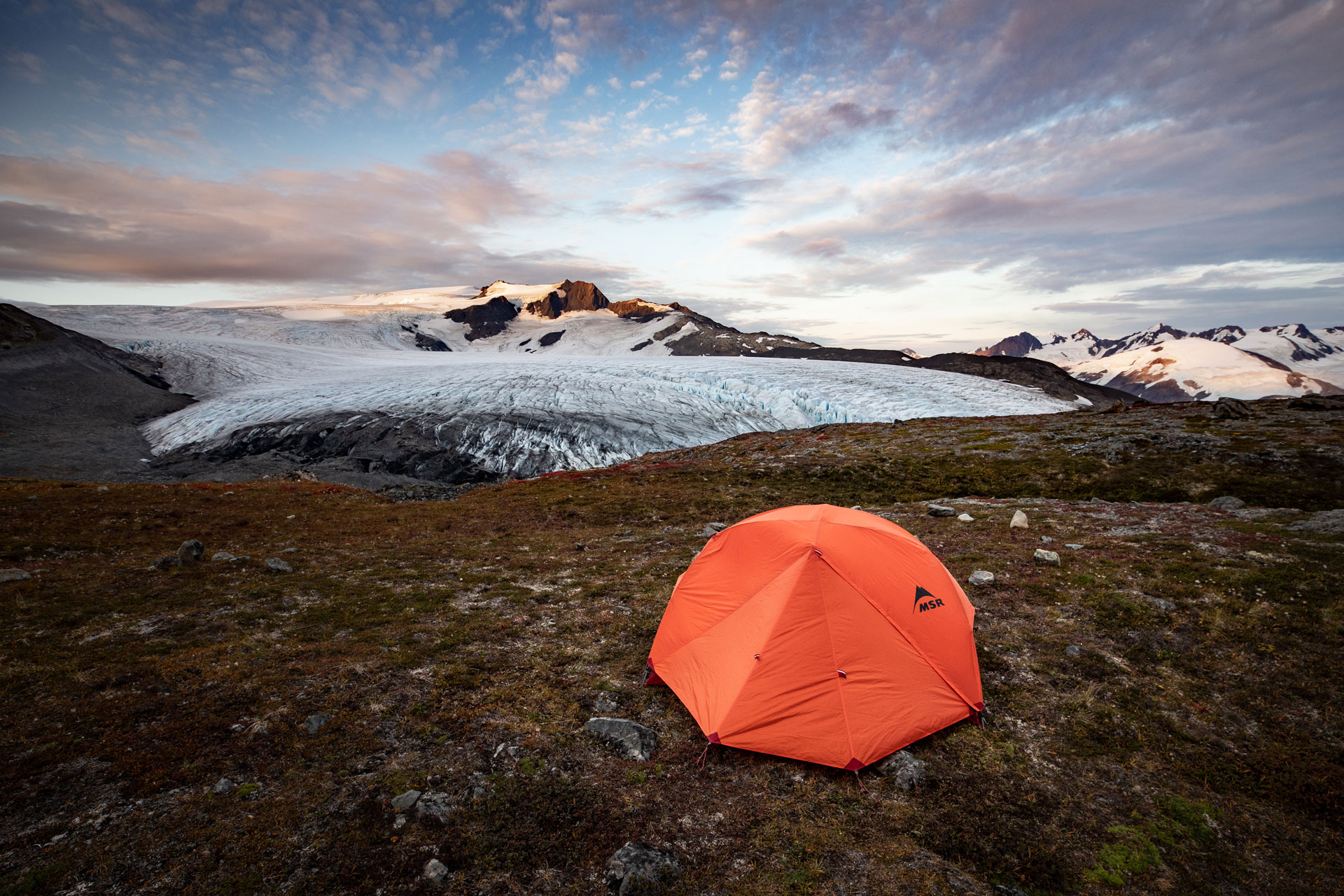 O’Neel’s team, part of the USGS Alaska Science Center, is working on a multi-disciplinary initiative called Icefields to Oceans, a research framework that transcends six different areas of scientific expertise, everything from glaciers to marine biology. The goal is identifying and better understanding the implications of melting glaciers in a complex and interrelated ecosystem, including Prince William Sound, a convoluted body of saltwater with hundreds of bays, deep fiords, and a circuitous shoreline that measures 3,800 miles. This ecologically rich marine environment contains a largely unseen food web that’s vital to Alaskans and the general health of the North Pacific Ocean. 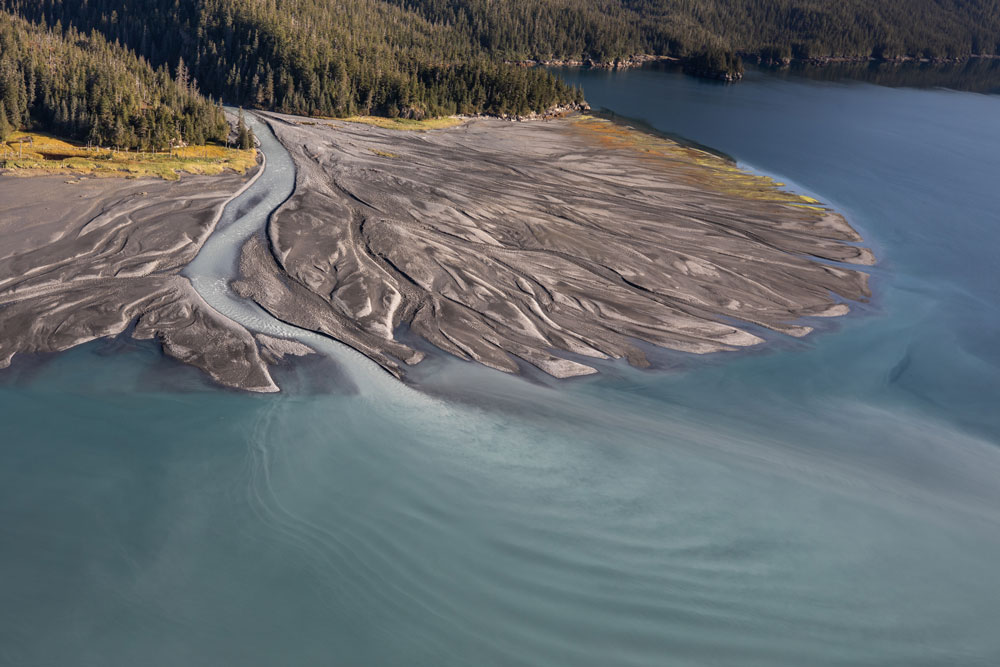 The area “downstream” from the Wolverine Glacier is part of the Pacific Coastal Temperate Rainforest (PCTR) and streams born from its numerous alpine glaciers are significantly shorter than those originating from watersheds along the west coast of the lower 48. This is significant because it implies the existence of an unusually close relationship between glaciers and near-shore marine environments. In other words, all the materials generated by glaciers are efficiently carried downstream and dispersed in the coastal environment rather than being left behind in the bottom of longer rivers as they commonly are in other glaciated regions, such as Washington State.

The connection between glaciers and the near-shore environment is “observable, but also not well understood,” O’Neel says. He refers to this conundrum as the unknown, unknown, and he admits that’s what worries him most—not understanding the implications. In essence, his team is confident a relationship exists but they don’t know enough yet to fully explain the linkages and the implications of the widespread loss of glacier ice.

“When you see how much of southern Alaska is covered in ice,” says geophysicist Louis Sass, “it’s obvious it plays an important role.” 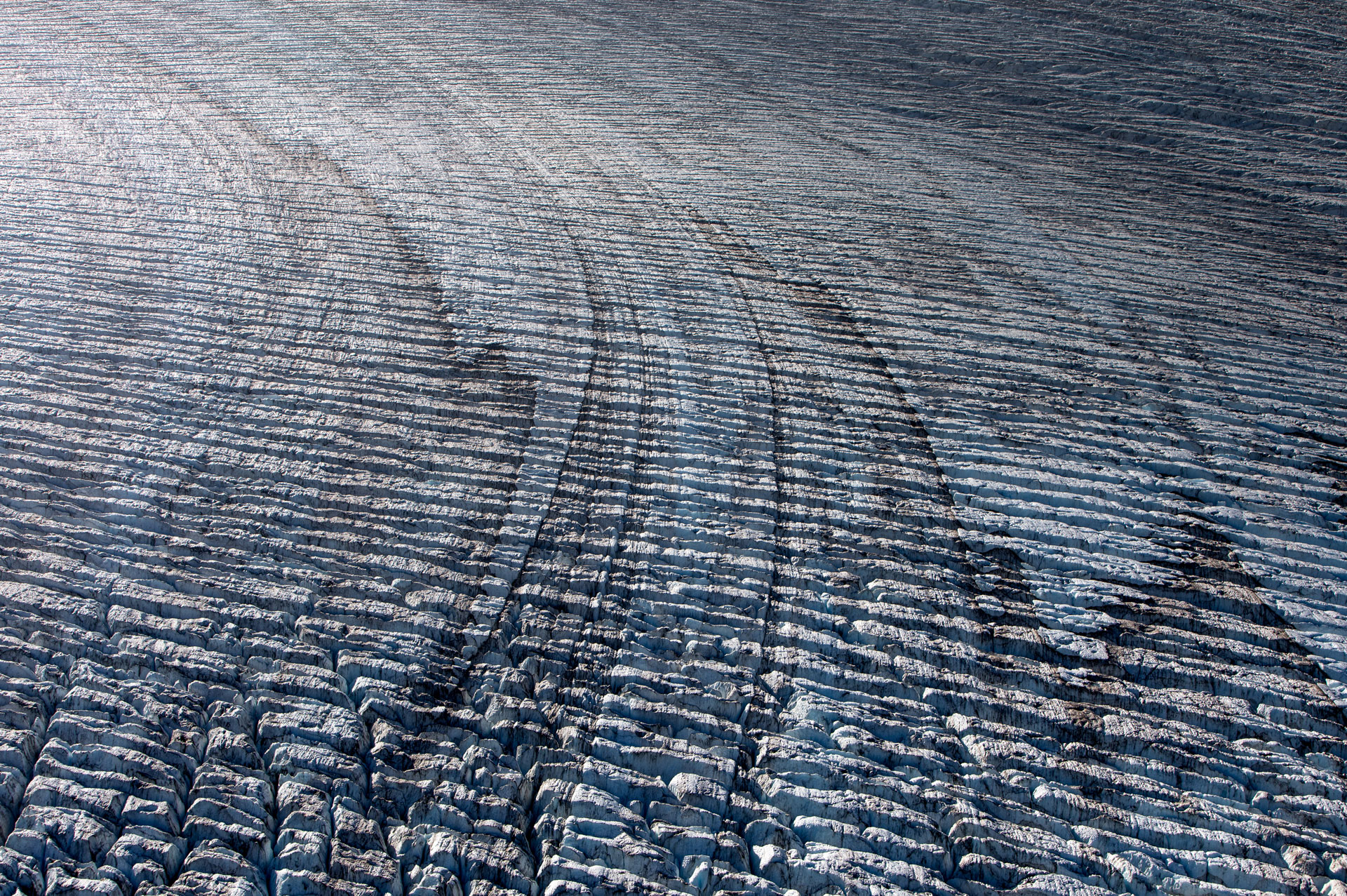 “It’s part of a bigger story,” he says. “It’s an emerging story but the struggle is measuring the connections.” 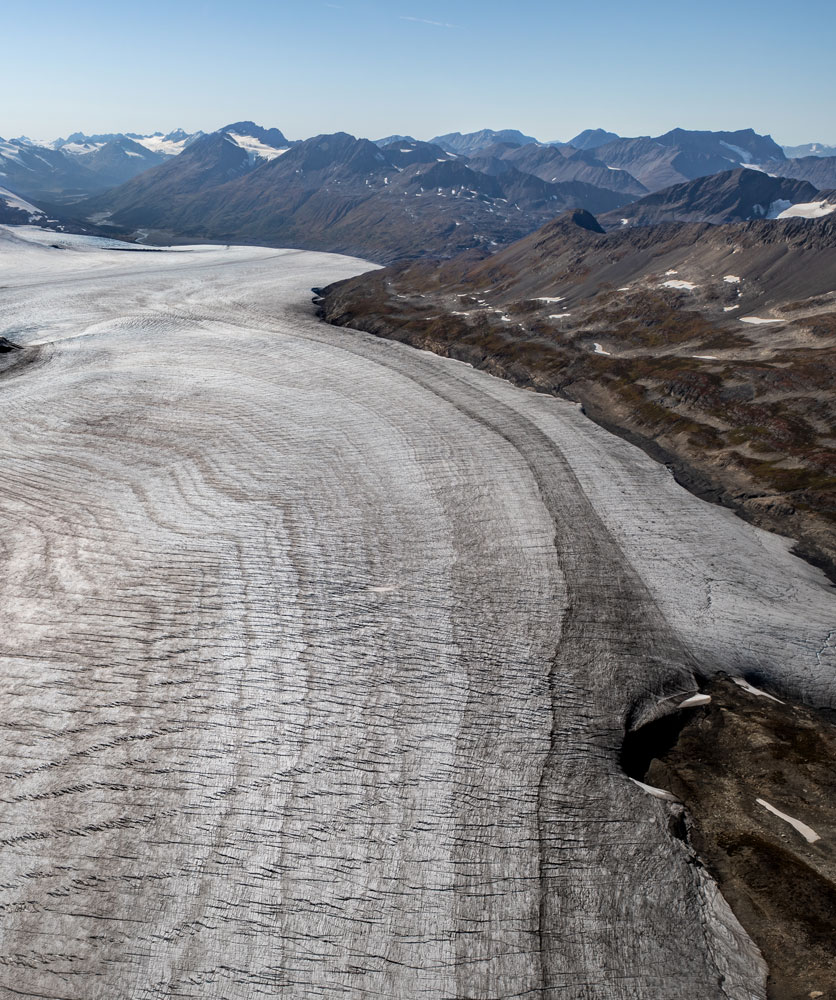 “We’re interested in identifying and understanding the physical drivers,” says Sass. “Fresh water has been known to be a driver in ocean currents. But fresh water is important in the near-shore ecosystem as well.”

The term “scientist” sometimes conjures notions of “hidden agendas,” spreadsheets, esoteric data, and perceptions of an enormous divide separating a person of average intelligence (me) from those who use their brains and advanced degrees to solve complex problems that may have serious ramifications for humankind.

When McNeil talks about his work there’s excitement in his voice, but he also refers to his knowledge and research as “a double-edged sword,” studying such dramatic changes to the environment. 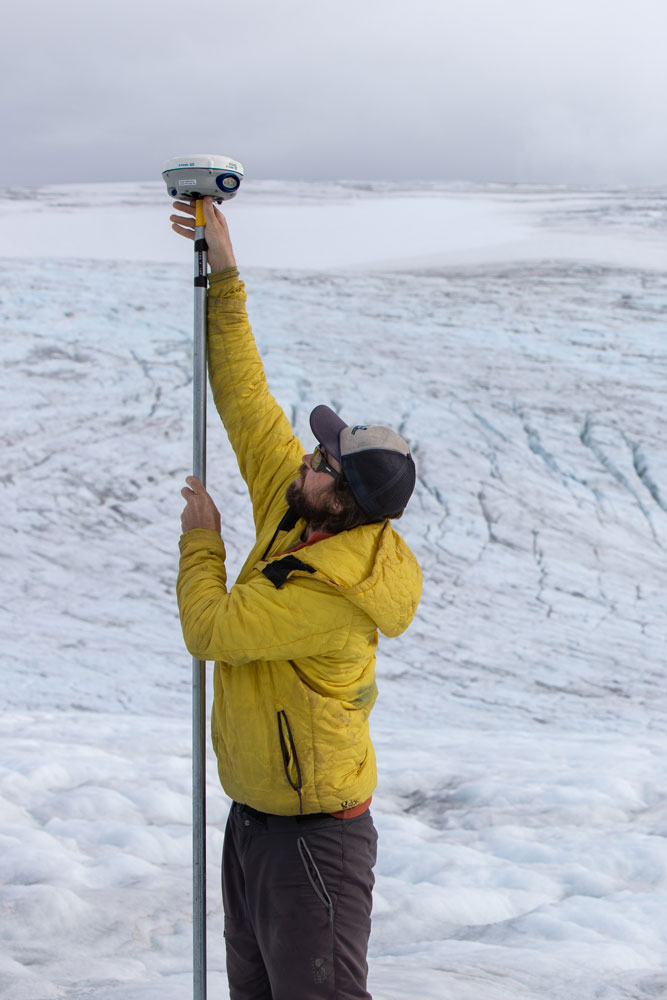 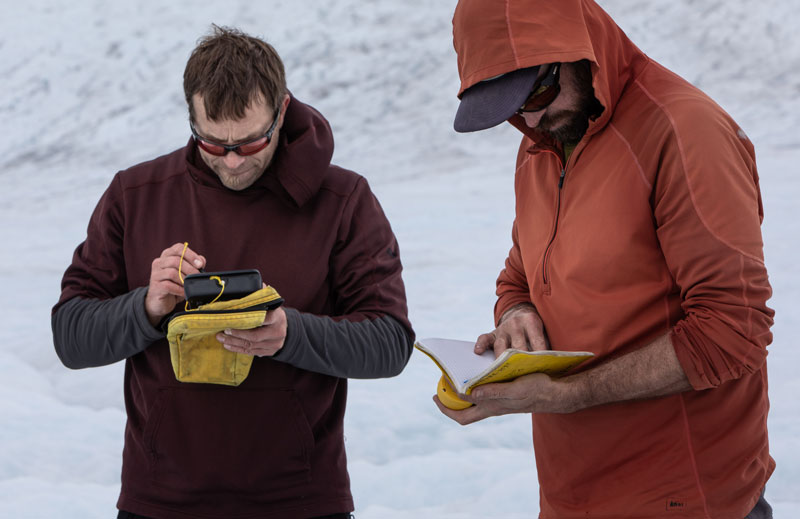 “Glaciers are one of the primary sources of the nutrients going into the ocean, driving life in the near-shore environment,” McNeil says.

“It’s a crazy contrast. What seems like a dead, harsh environment is actually a seed for life. Grinding up rocks underneath and alongside the ice, flowing down valley.” 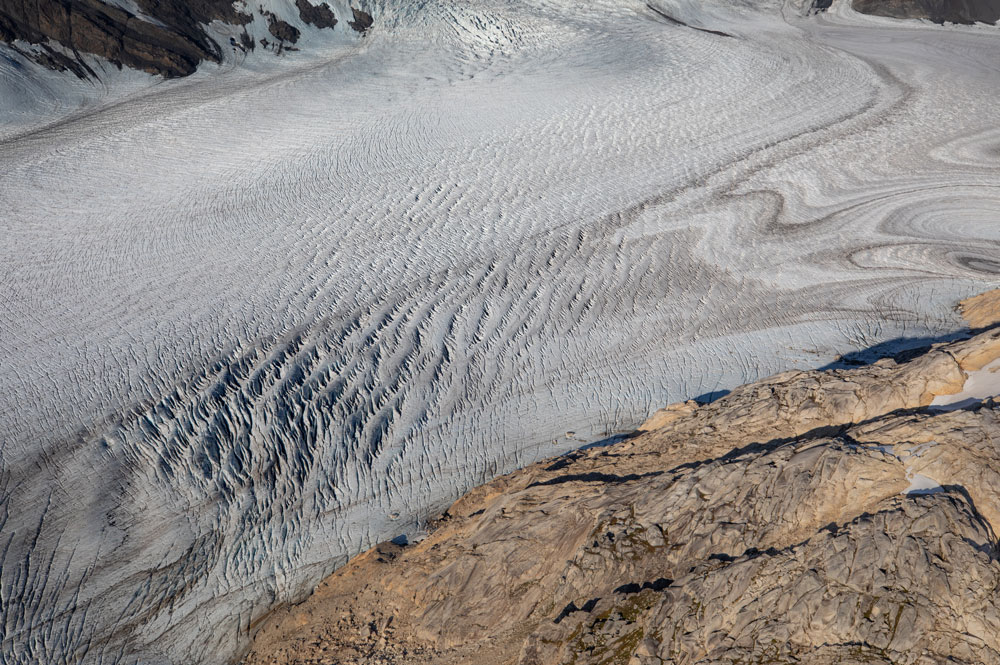 “All this action produces a fine, nutrient rich powder, made of microbial critters, ice worms, snow algae, and bugs that live and or die on the glacier surface.”

Another of O’Neel’s team members, Emily Baker, is at home in the alpine environment next to the Wolverine Glacier. The 31-year-old geophysicist collects and manages a massive amount of scientific information for the team. I’m with her on an exposed ridgeline above the glacier, watching as she downloads meteorological data from a weather station to her laptop. As she’s analyzing the results I realize the juxtaposition of our location. 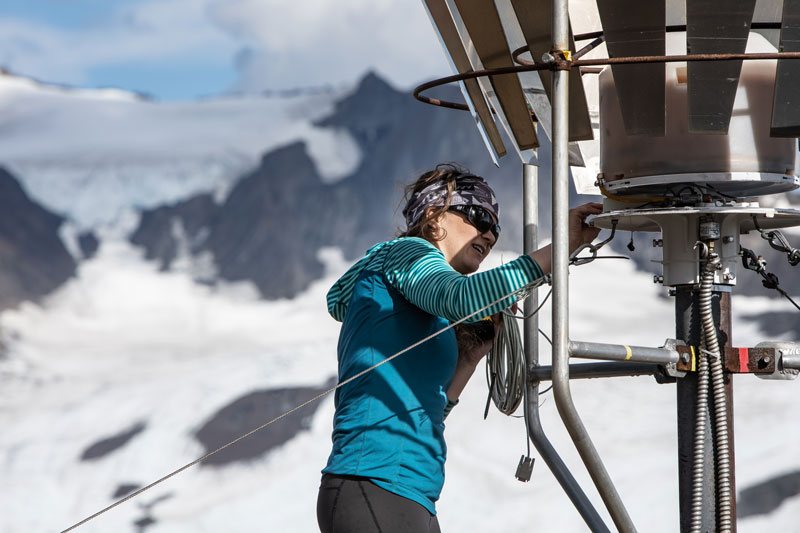 Not that far away are the pristine waters of Kings Bay, and beyond that, Prince William Sound. Two thousand feet below us, a temperate rain forest, innervated with streams and rivers that are fed by other glaciers lining the Nellie Juan River valley, including the Wolverine Glacier. From our rarified position I begin to get a sense of it, a giant ecosystem with complex connections.

“The contrast of the glaciers with the lush and productive marine ecosystem is almost confusing,” Baker says. Referring to the ice down below us, she adds, “It’s not alive. But it is.”

“There’s value in bearing witness,” she says. “Someone should be watching. The process of science allows us to witness things that are beyond the scope of a single person.” 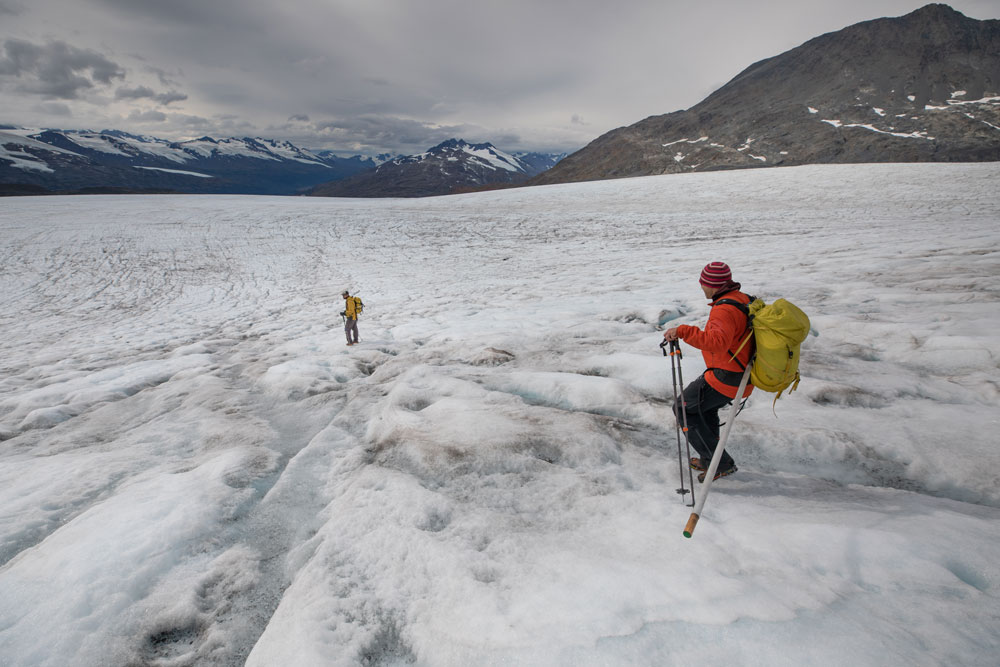 During my time with O’Neel’s team I observed them working deliberately and methodically, a process involving an unusual blend of symbiotic skills, a mix of mountaineering, glacier travel, and research. But what stood out the most was everyone’s intensity and focus, the extent of which could only be construed as passion, the application of science in pursuit of understanding, looking for the truth, and finding a common language in a changing world. 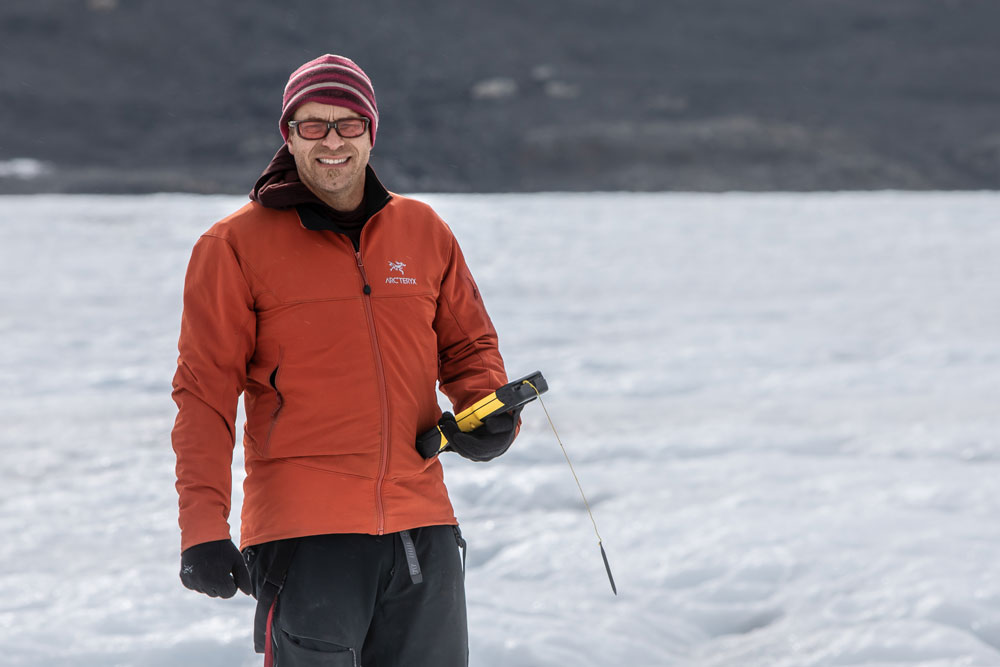 “I knew for certain I didn’t want to bump chairs for a living,” says Shad O’Neel, on the decision he made as a young man. Now 46 years old, he’s a geophysicist and the head of the glacier research program at the Alaska Science Center, part of the USGS.

In the late 90’s Shad went to Alaska for the first time, after following his girlfriend north from Montana. He was trekking across a glacier in the Wrangell Mountains when he became smitten with the environment instead. Alaska serendipitously stole his heart, and this newfound relationship guided both his life and career decisions.

An avid skier, mountain biker, and backcountry specialist, O’Neel is also a ski coach as well as a mentor to young scientists. 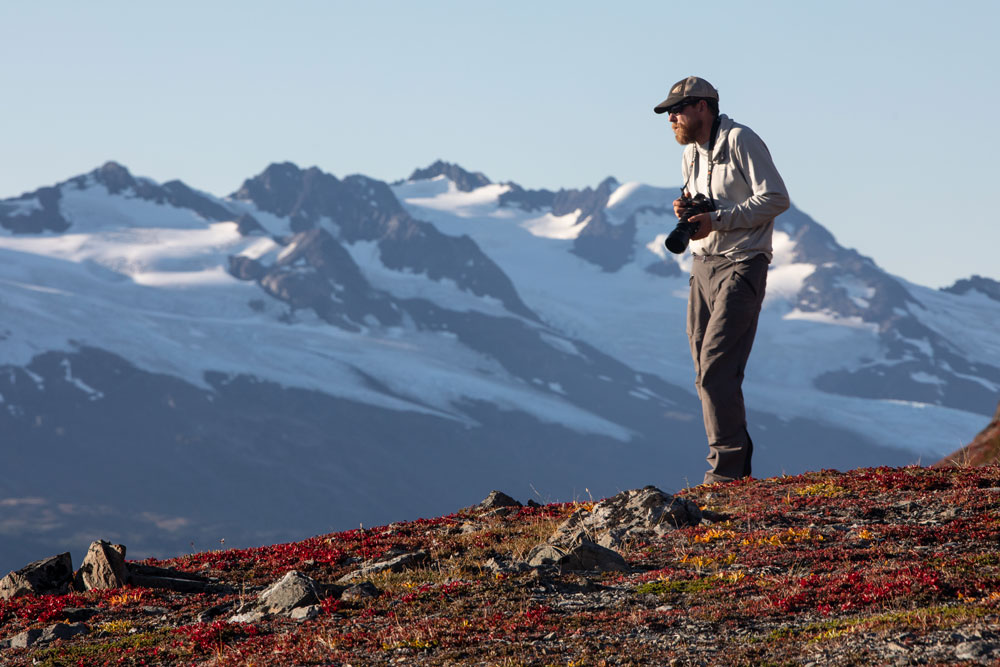 Louis Sass is a quintessential Alaskan scientist, which is to say he possesses the attributes of a classic Alaskan as much as having a disposition for science. The place, the man, and his science are all inextricably connected.

Some places in the world define people, and Alaska is most definitely one of these places. To hear the 41-year-old geophysicist talk about his research illustrates the inseparable power of environment.

Despite being understated and humble, Sass is known as an incredibly capable backcountry specialist, with many Alaskan adventures to his credit. 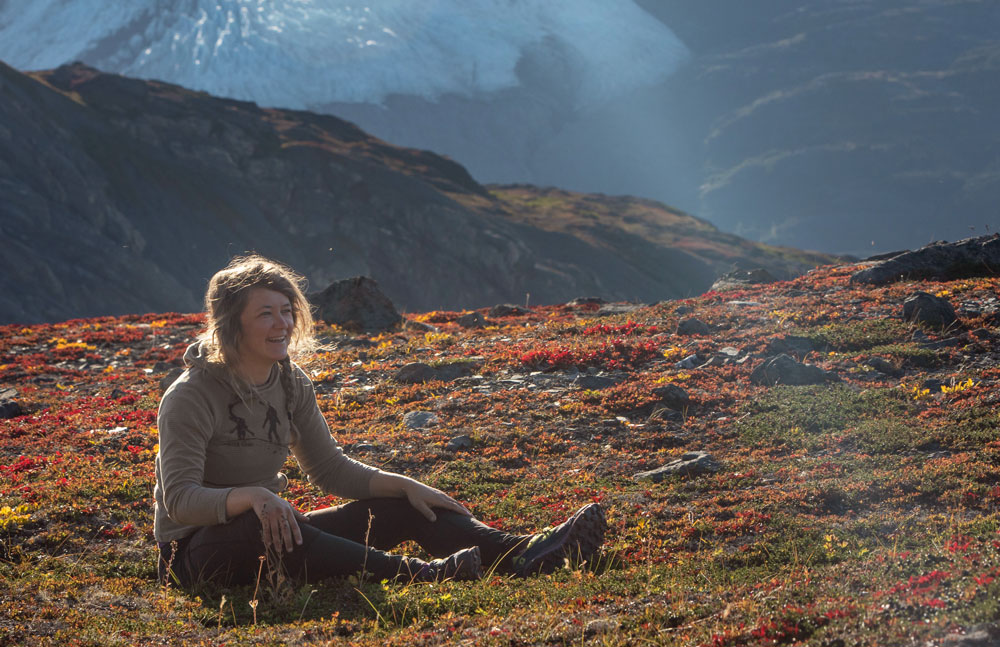 Emily Baker loves cryospheric science but she admits she also loves the romance of glaciers. The 31-year-old geophysicist talks about how big glacial bodies inspire awe as much as fear, and how when she’s working out in the wild mountains of Alaska it often feels like another planet.

Emily is a former collegiate ski racer who traded competition for the field of glaciology, a unique career that allows her to work on complex research projects as well as ply her diverse wilderness skills, whether it’s alpine touring, mountaineering or hiking. 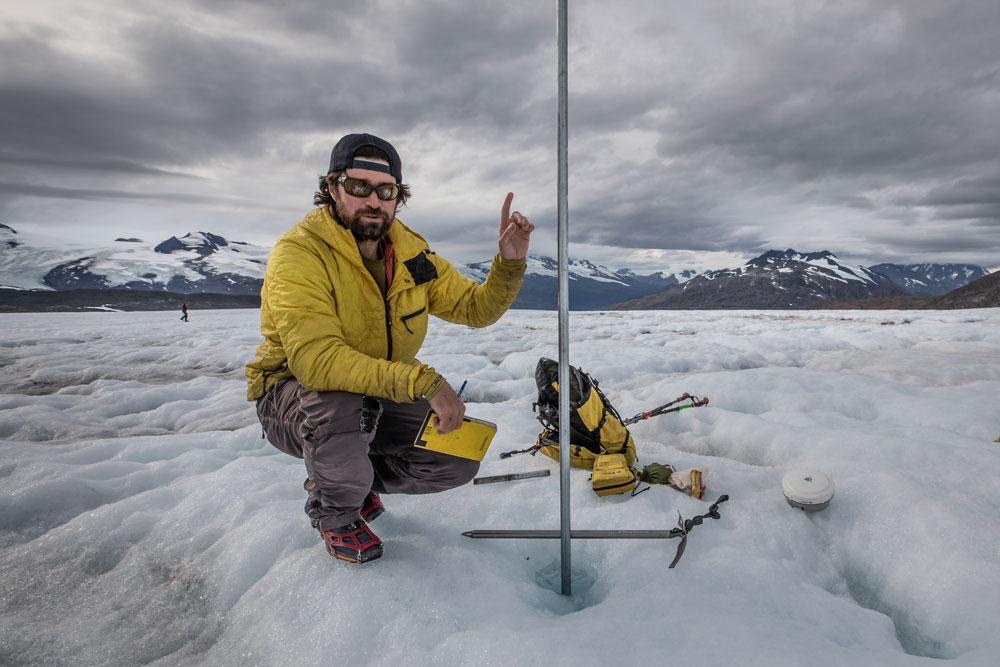 In 2009 Chris McNeil traveled from his home in Massachusetts all the way to Alaska for an opportunity to study with the Juneau Icefield Research Program. In his early twenties at the time, he now admits he was more passionate about skateboarding than academics, but he was open to adventure, and he was also looking for some direction in life.

The trajectory in Chris’s life changed dramatically after spending two months on the immense Icefield above Juneau. He discovered a life purpose, and especially a unique purpose for adventure—to support science research in the field.

The 32-year-old geophysicist epitomizes the unique characteristics and mountain skills everyone on his team possess, attributes that are required to do research in a rugged and remote environment. A day’s work in the field may require mountaineering and glacier travel as much as doing scientific research. 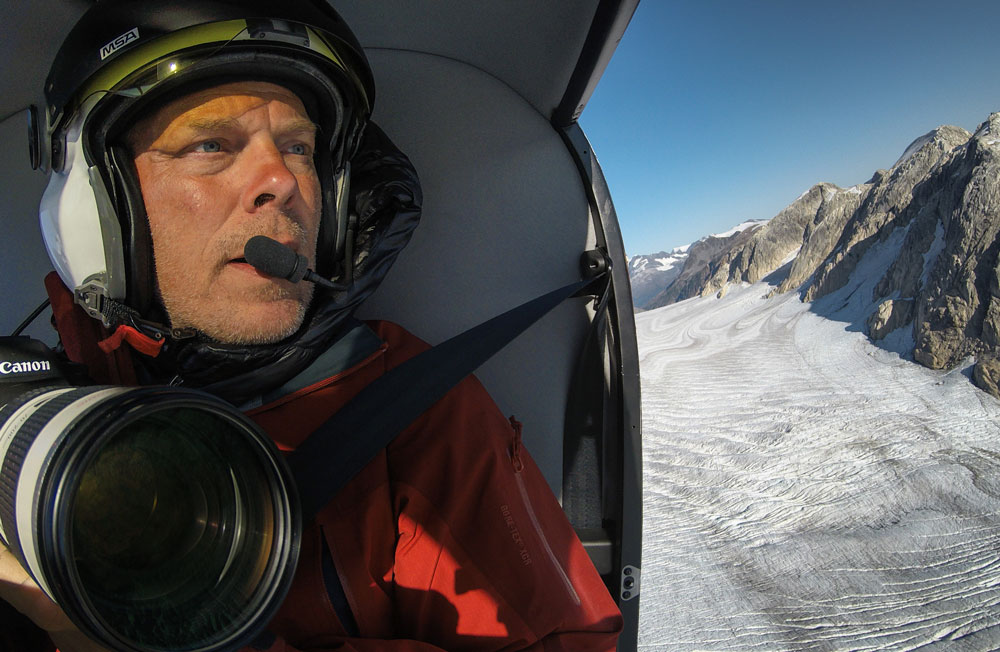 In 2018, photojournalist Joe Yelverton spent seven months in community with scientists and residents of the Arctic while exploring and documenting the changing landscape. This experience led to the creation of State of Change, a project that captures stories through words and images, funded in part by the Alaska Humanities Forum.