Words and Photos by Laura Lancaster 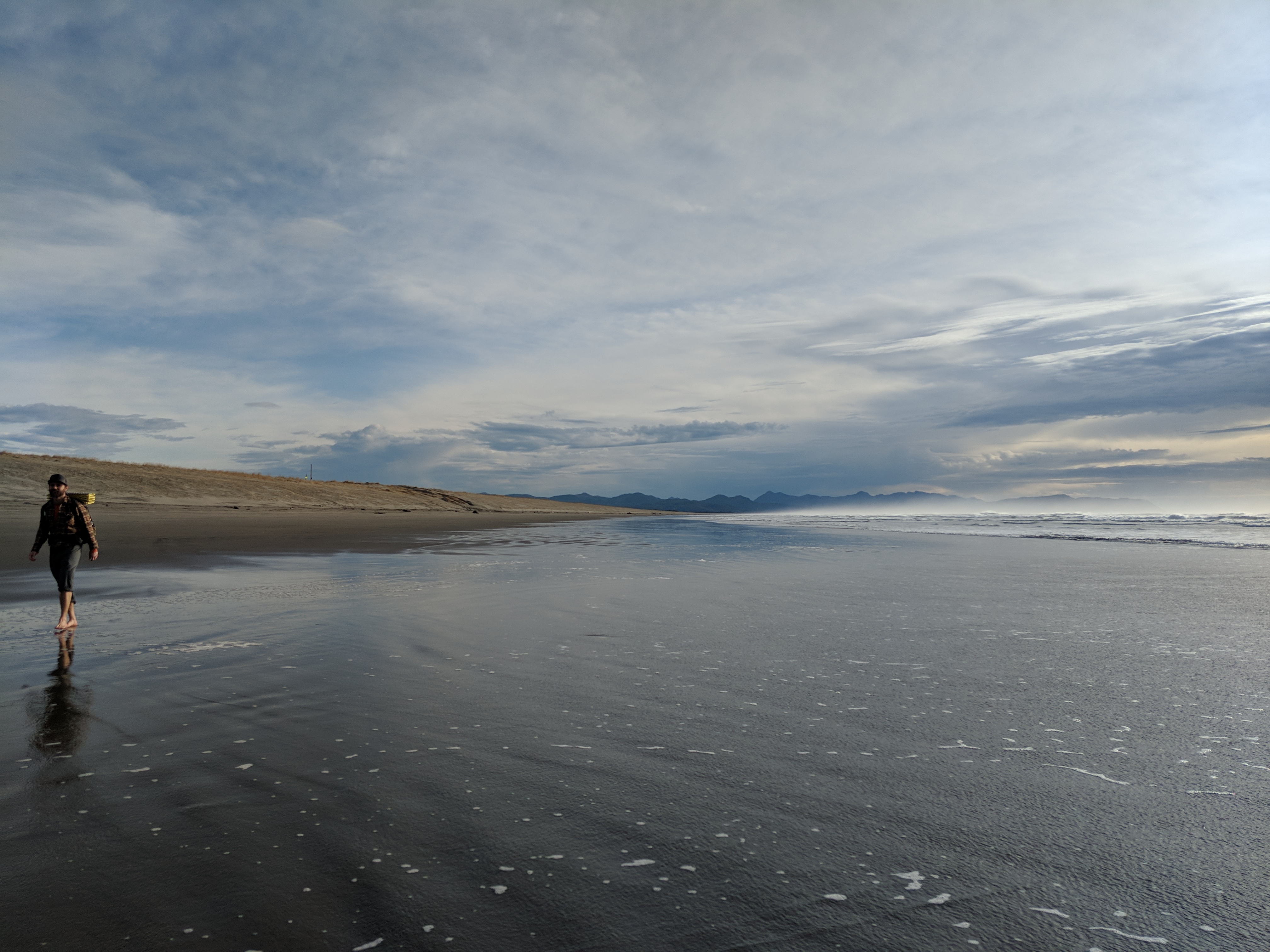 “I knew you were coming.”

I had been dreading this stretch of the Oregon Coast Trail that ran between Manzanita and Tillamook since we started weekend thru-hiking (or section-hiking) it in chunks back in 2017. Heading south from Tillamook, the OCT follows Highway 101—the main artery for the Oregon Coast—for over 10 miles until the trail hits the beach again just north of the town of Garibaldi. Ten miles of road walking isn’t what most expect when they think: Oregon Coast Trail. Photos of endless stretches of flat, sandy beaches, pine-needle-cushioned trails snaking up misty, wooded headlands, a cafe in a picturesque beach town. That’s what you’re here for. 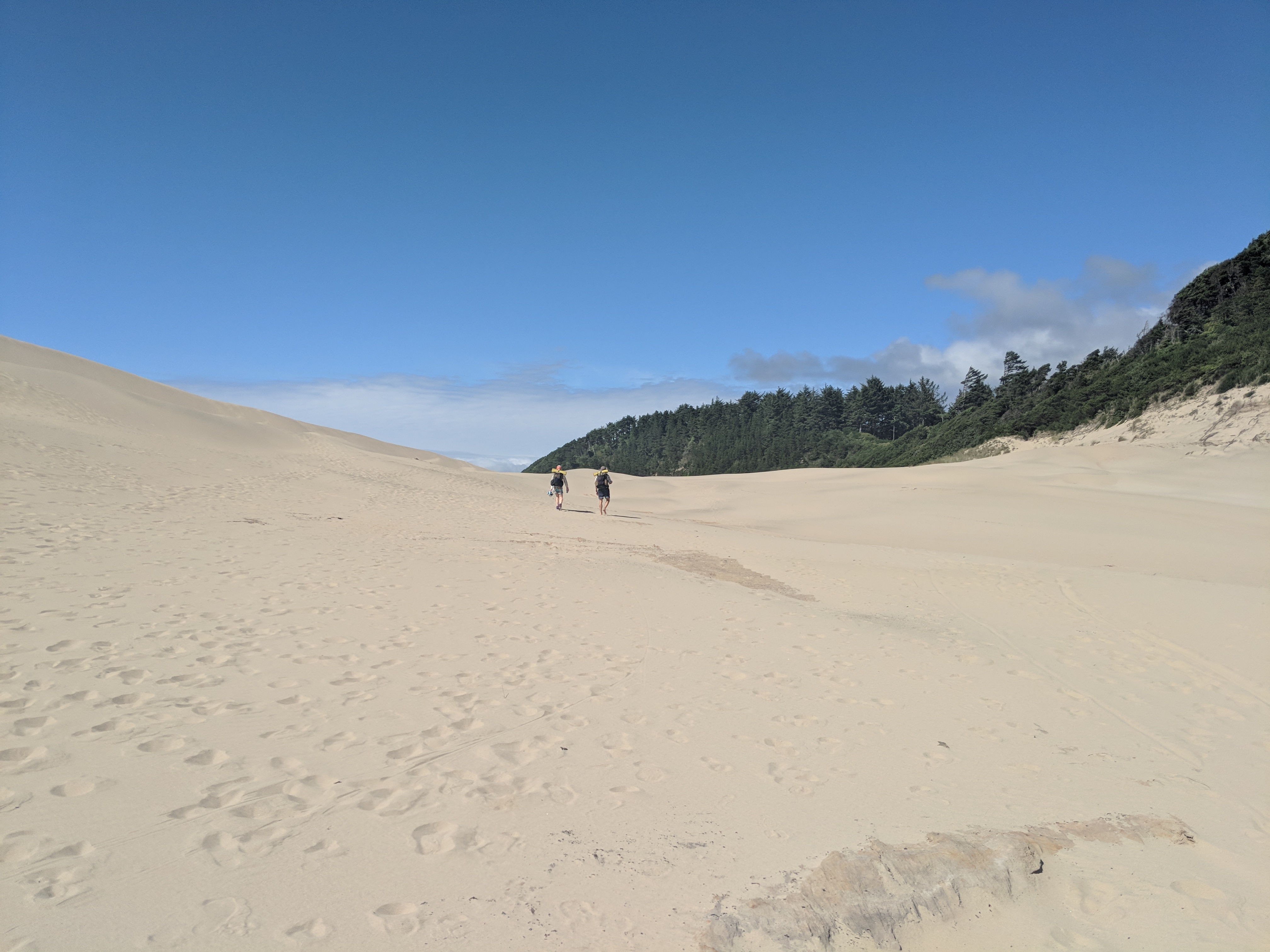 The Oregon Coast Trail is a natural extension of a well-known and beloved Oregon law: House Bill 1601, otherwise known as the Oregon Beach Bill. It declared everything from 16 feet above the low-tide mark down to be public property–open to all with no fences allowed. While other states have to contend with waterfront landowners posting no trespassing signs, in Oregon, you could walk the length of the state via the coast. 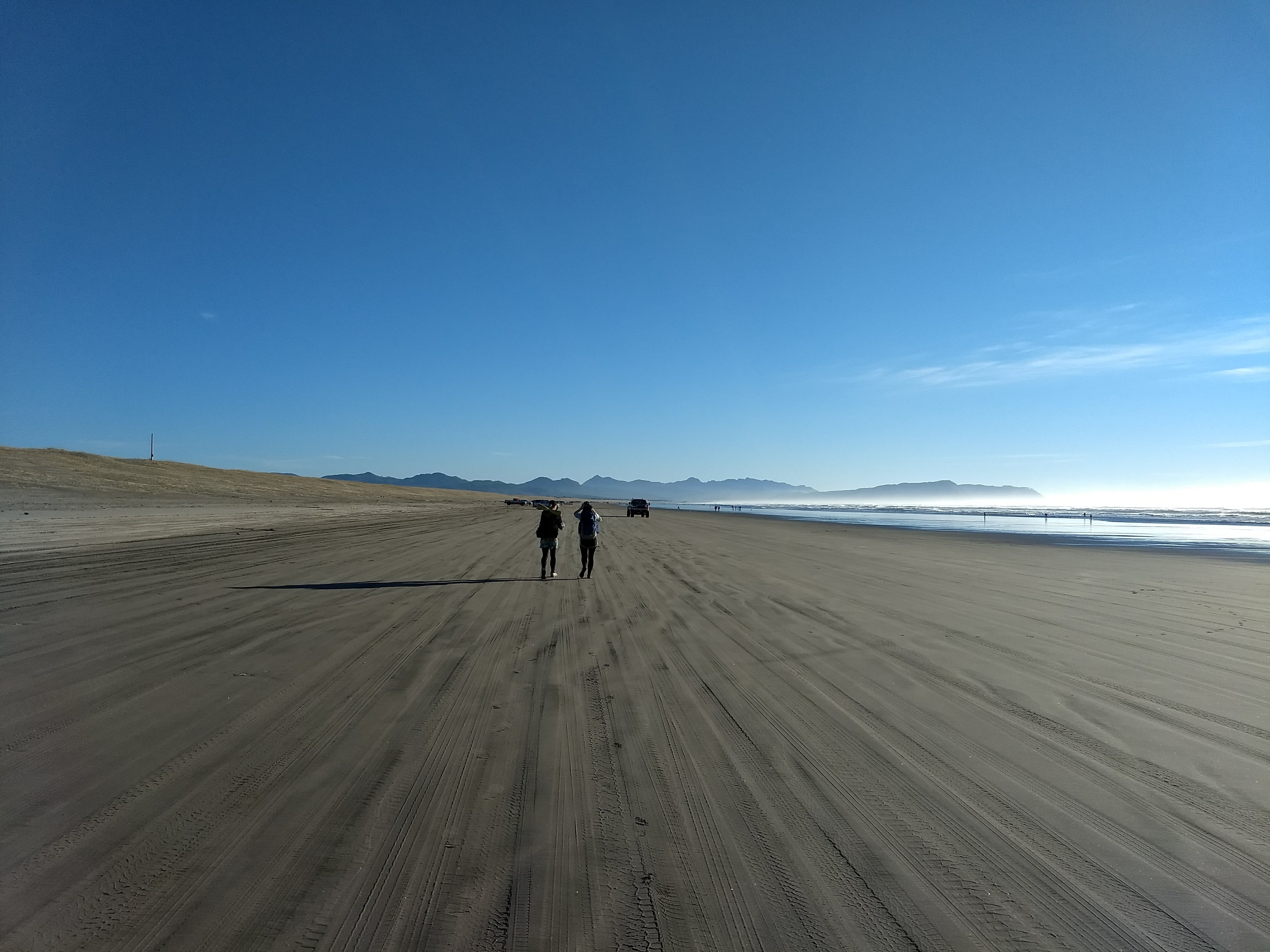 Or at least that’s the idea. The Oregon coast is still wild, broken up by numerous jetties, towering headlands, and sheer cliffs. And Highway 101 occasionally occupies some of the better ocean-side real estate. The result is a trail that’s part defined footpath, part choose-your-own-adventure, part impassable. In other words, hikers would need to trek too many miles along the highway to achieve a pure thru-hike of the OCT. 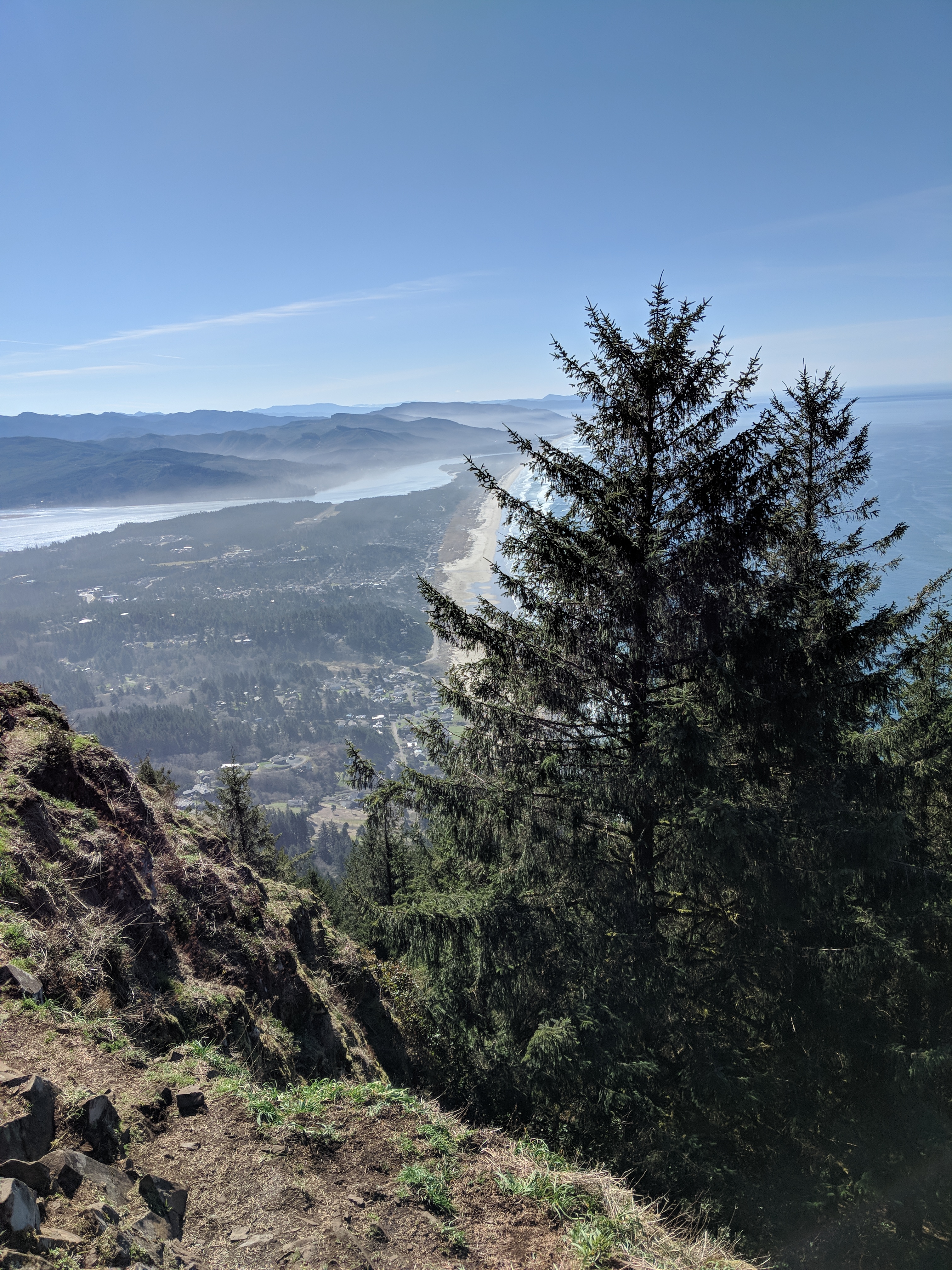 On this section, our group of four started cutting the “official” trail almost as soon as we started—opting for quiet side roads that paralleled the main drag. Then we noticed a set of train tracks on Google maps. It got us to thinking: Could we hike this stretch on the tracks? Was that safe? And how would we get down to them?

“My neighbor called and told me you were trying to get down to the railroad tracks!”

About a quarter of a mile back, we had stopped to ask a local farmer about our idea for an alternate route. He gave his directions to a nearby farm, telling us to just let the man whose property it was know what we were trying to do. Instead of being suspicious as to why four backpackers wanted to cut across his property, the farmer warmly greeted us—like so many Oregonians we had met during our section hikes. He led us down to the tracks, telling us about how far they ran (all the way to Manzanita), how long he had lived there for (nearly all his life), and, most importantly, that there wouldn’t be any trains running this time of year. 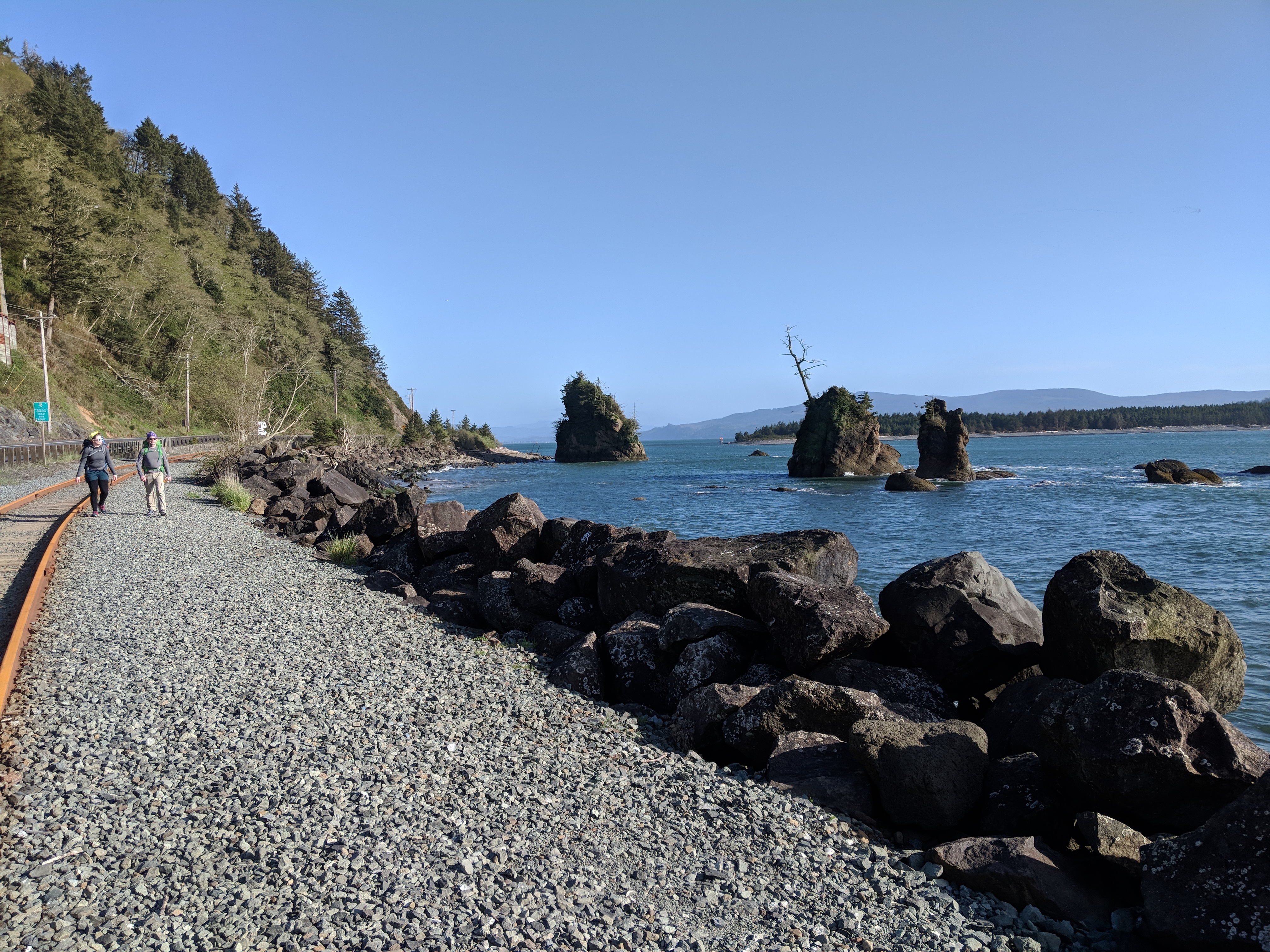 Hiking the tracks turned out to be one of the highlights of our weekend. Where the road above us was behind a thick wall of vegetation, the tracks were practically on the water itself. We watched seals playing in the water and eagles flying overhead. On the OCT, cutting the official trail is sometimes the right thing to do.

So is talking to the people you meet along the way. While the major tourist centers at places like Cannon Beach are filled with out-of-towners, the smaller beaches are recreation spots for just about every stripe of local. A surfer’s paradise in Smuggler Cove. Paragliders at Kiwanda point jumping from the dunes, sailing near the cliffs, and offering rides to anyone who’s interested. And of course, the dozens of sea lions lounging in the sun across from an oyster shack. 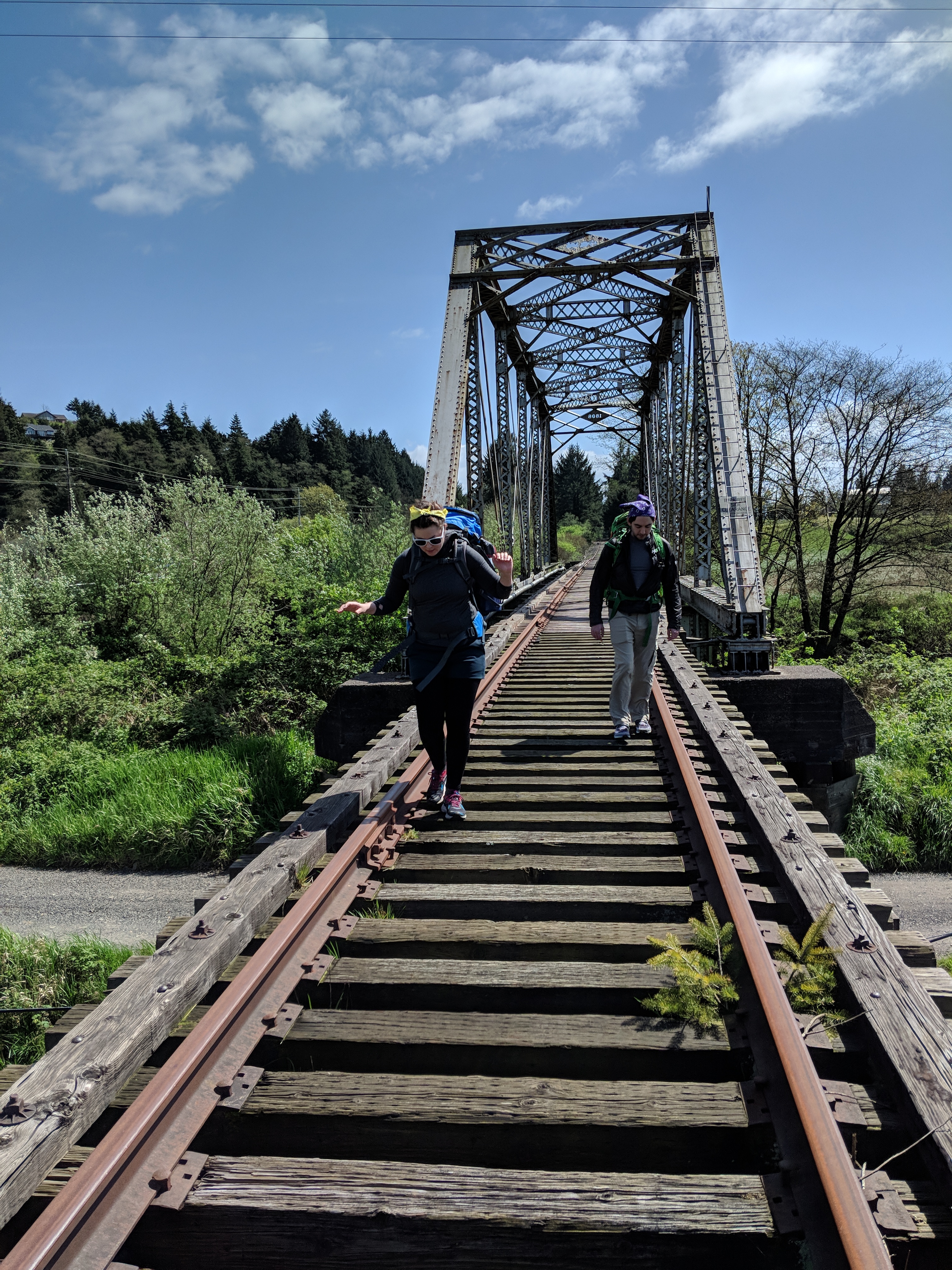 The train tracks weren’t on the official OCT maps, but discovering your own route along the Oregon Coast is half the fun. 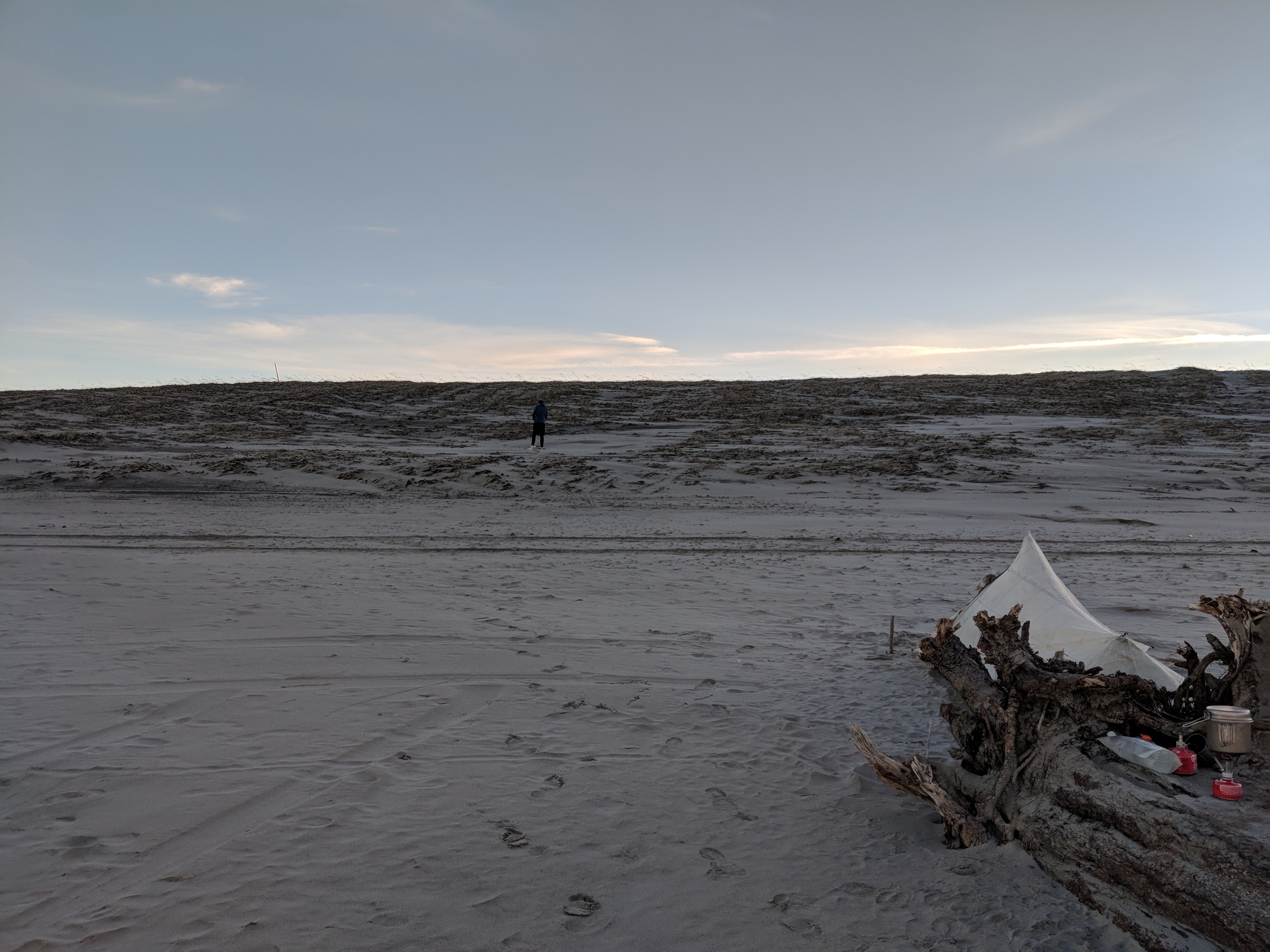 Here’s what you need to know to get started:

This is tricky. The maps put out by the Oregon Parks and Recreation Department have this to say: “Beach camping is restricted within city limits, state park boundaries, and near snowy plover habitat areas (avoid orange fenced areas during nesting). Fires are not allowed upwind or near driftwood piles.” In addition, camping on the beach itself is prohibited along the entire stretch of the Oregon Coast.

Where camping is allowed is on the grassy dunes just above the beach itself (just be sure to steer clear of private residences, being in their line of sight is another prohibition). Navigating these rules can be tricky for even experienced thru-hikers. Fortunately, there are a number of state parks and other campgrounds across the Coast, many of which have sites for overnight backpackers.

Whether you’re looking to drop a shuttle car, get to your next section of trail, or just skip around a particularly hairy stretch of 101, the Oregon Coast has got you covered. There are a series of bus routes running up and down the coast from Astoria to Brookings, including free overnight parking at the bus stops in Tillamook and Manzanita, among others.

Because these buses are primarily for locals, they have some flexibility with pick-up and drop-off points, but limited hours and days that they run—be sure to call well in advance of your trip. And don’t forget to bring cash in small denominations with you.

As anyone who has hiked a long trail will tell you, a willingness to hitchhike can vastly improve your trail experience. This is doubly, or even triply true, on the Oregon Coast Trail where huge swathes of beach are left off the route of the official map because there is no way to cross a river mouth or bay opening. But intrepid hikers can try “hitchhiking” across these waterways by grabbing a ride from one of the many boats along the coast.

Unlike many other long trails in the United States, the Oregon Coast Trail can be hiked year-round! However, rain and colder temps can make for a less pleasant hiking experience in winter. Conversely, summertime crowds can make it harder to secure choice campsites. Tackle this one during the shoulder seasons if you can for the best of all worlds. But be prepared for rain no matter what time of year you head out.

Whether it’s a town or a natural creek, water sources are reasonably plentiful along the Oregon Coast Trail. The same goes for restrooms—which is fortunate, as privacy is limited.

While there are headlands to be crossed and (the occasional) mountain to be climbed, the reality is that the vast majority of the terrain on the Oregon Coast Trail is flat and smooth—be it beach or road. Grab your trail runners for this one, and leave the hiking boots at home. You may find yourself not wearing shoes at all for long stretches!

Unlike the Washington Coast, where impassable headlands require waiting out the tides every 5 miles or so, there are few sections of the Oregon Coast where this is an issue, and even fewer where you should be concerned about the tides for your own safety. That being said, the ocean is unpredictable and hikers should be aware of any upcoming king tides, especially if they are planning to camp along the beach.

You can absolutely hike the Oregon Coast Trail with the maps provided by the Oregon Parks and Recreation Department (https://www.oregon.gov/oprd/parks/pages/oct_main.aspx), but you’ll find yourself backtracking periodically or guessing as to where a particular turn-off is located. That being said, this can lead to some fun discoveries and an increased sense of adventure on what is otherwise a pretty low-key trail. Hikers looking for something more detailed should check out Bonnie Henderson’s Day Hiking Oregon Coast (and everyone should check out her wonderfully detailed blog for more information on the trail.) 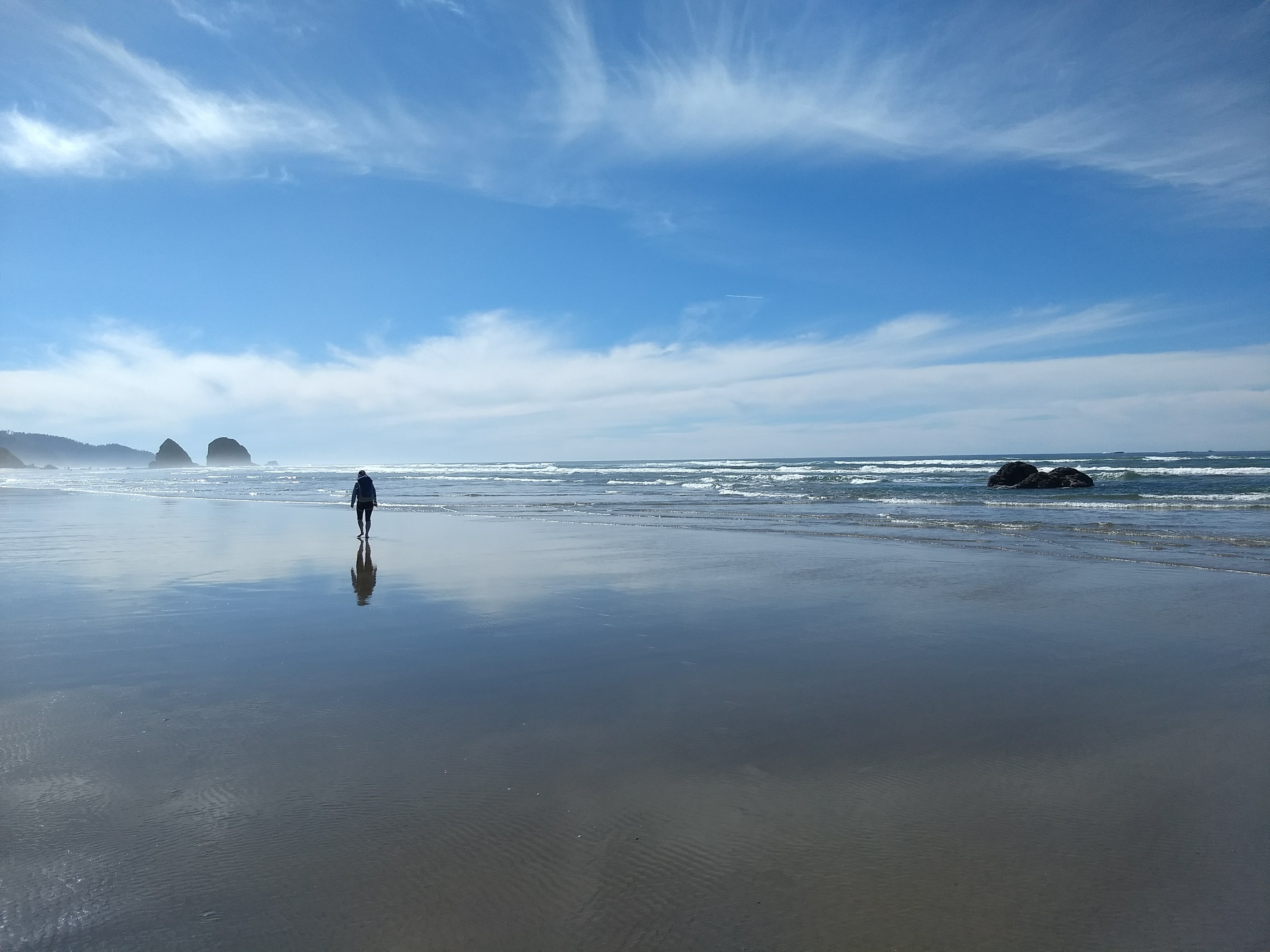 Laura Lancaster started backpacking at the age of 12 and hasn’t let up since. Currently a freelance writer and editor living in Seattle, she thru-hiked the Pacific Crest Trail in 2014 and the Wonderland Trail in 2015. Laura has been published in Backpacker, Survivor’s Edge magazine, and American Survival Guide. You can see more of her work at lauralancaster.net.