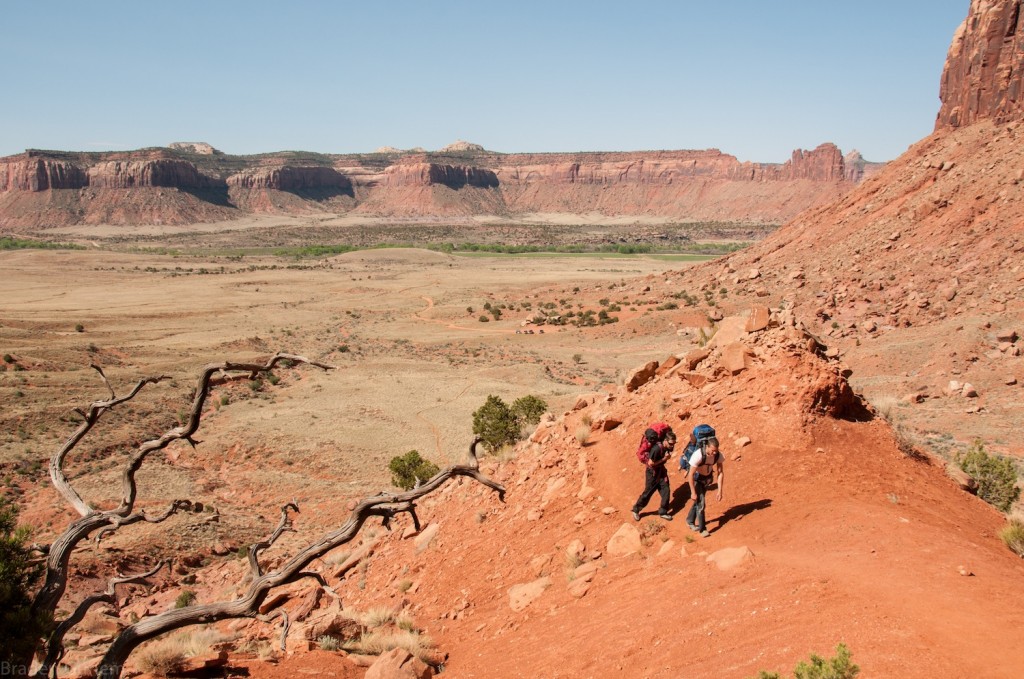 Perhaps more than any other climbing destination in the United States, Indian Creek will leave its mark on you. The stout, often painful cracks, rarely allow their suitors to escape without a cut, scrape, or bruise; proof of the struggle, a badge of glory to return home with. This battle often becomes addictive. After one returns from The Creek, he is either determined to never return again, or return as soon as possible. There’s a certain kind of magic is this masochistic pursuit.

The addiction now affects hundreds, maybe thousands of crack addicts. At first it was a small number; now they even come from all the way across the pond, Europeans, desperate to get a hit, a shot at crack climbing glory. And then there are the lifers, like us, just trying to find that same feeling and high, we experienced long ago. But like a true fiend, it takes much more than the original dosage to replicate those same sensations. 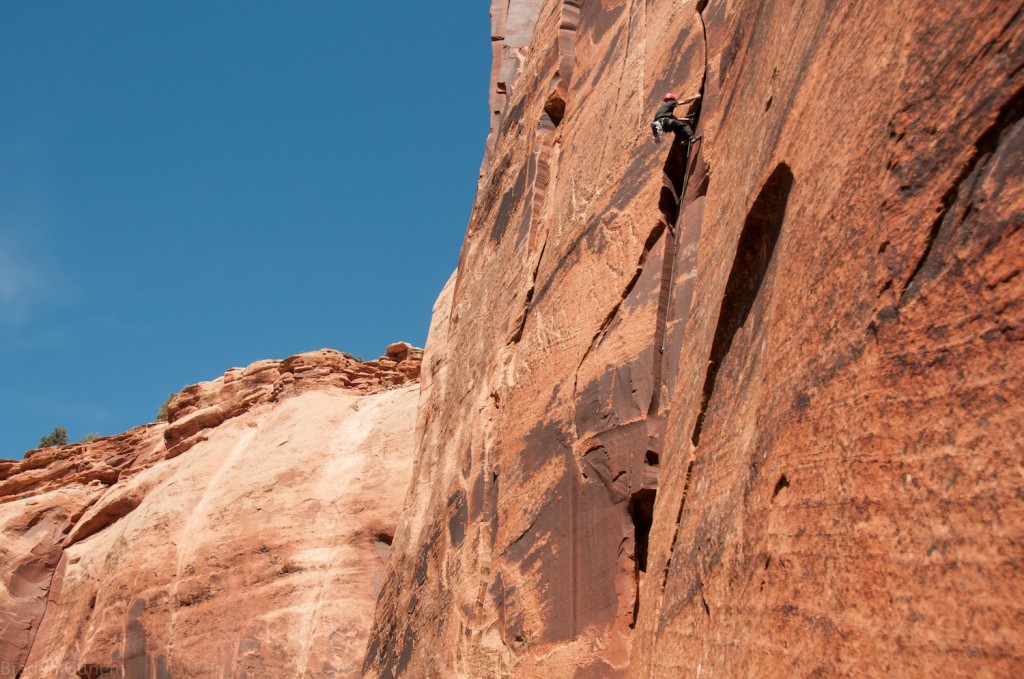 I remember those first Indian Creek climbs: They defined the essence of struggle. Even Supercrack, with its wide hand jams, worked me to the maximum. One climb I tried in my early days, Binge and Purge, just right of the ever-popular Incredible Hand Crack, was the perfect metaphor for Indian Creek climbing.

The start was straightforward, thin hand jams for twenty feet. Then it moved into the realm of the absurd, into a squeeze-chimney-roof, just barely wide enough for an average climber to worm through. I convinced myself I was stuck. Panic. Fear. Then finally the realization that I had to do something. I calmed my breath down, and then began to move upwards, centimeter by centimeter with my inhalations. Through the squeeze I got shut down by more off-width climbing above, hanging on the rope, but when I finally reached the chains and lowered back to the ground, I had an overwhelming feeling of wanting more.

Twelve fiendish years went by, and Indian Creek kept growing in popularity. More people wanted a taste. By then I got to know many of the crags well, in and out, and while I had barely even touched the tip of the iceberg, I’d found a few unclimbed cracks. It’s hardly a secret that there are probably thousands of unclimbed cracks in the heart of the Utah desert, it’s just that all the low hanging fruit has been picked.

The desire for a new route can be like beer goggles; the line is better in your mind than it actually is. The first new route I got on (Snaggle Tooth at the Broken Tooth Wall) was 80 percent off-width, and involved a systematic cleaning of throwing loose rock at full force, a technique my belayer was less than happy with. After thrutching and cursing through this beast I vowed to stick to established lines at The Creek. That didn’t last long.

A month later, I enlisted a new partner for another new route, just to the right of Snaggle Tooth. The first section went at a surprisingly moderate level, easy 5.10 a rarity for Indian Creek. I brought my partner up to a comfortable ledge, and he embarked on a second pitch. The hand crack we could see from the ground was guarded by, of course, an off-width/chimney section. He did the ever delicate leading-hurling loose blocks combination and was rewarded with fifty feet of perfect number two Camalots. The edges were crisp and rough, and the line deserved a proud name, we chose Tooth Pac, a tribute to the late rapper 2 Pac. 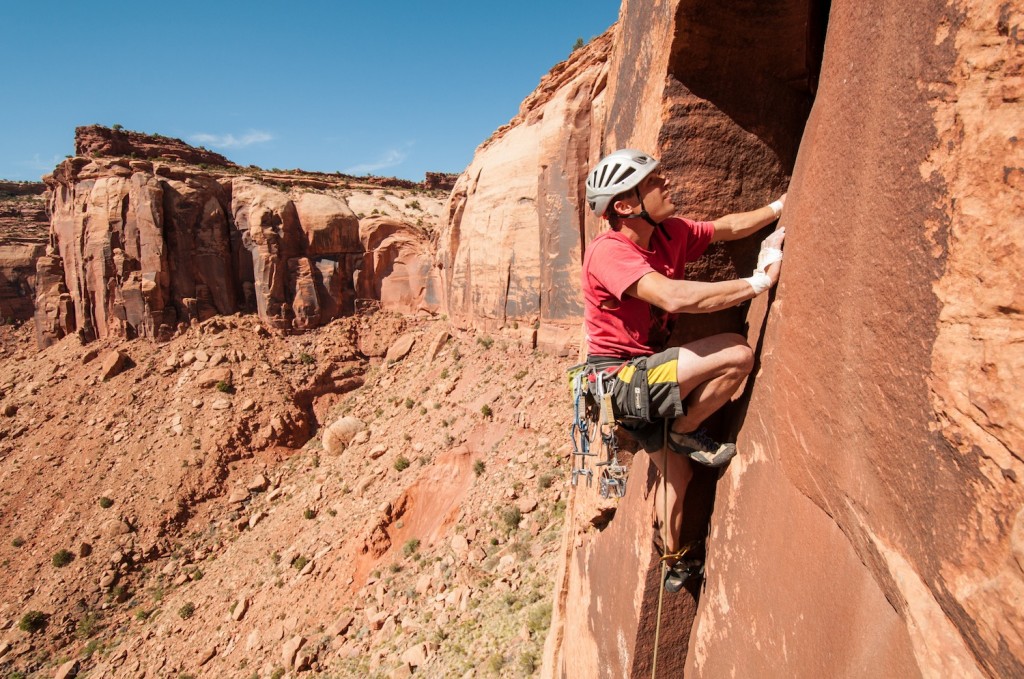 I thought I wanted just one, but the hunger grew deeper. Most lines were not as good as they appeared from the ground, but some actually were. Off-width was almost always a requirement, is there any place on earth that has more off-widths than Indian Creek?

Often I would do the first ascent, hanging on gear, cleaning, and placing the anchors, and then another friend would snag the first free ascent. I claimed not to mind, but a nagging voice, the ego, in the back of my mind would complain.

Months into the new route bingeing, summer was about to blast all of us climbers out of The Creek. But we had the chance for one more. Just one more new crack. Again, on the sharp end I climbed, hung, cleaned and drilled. The line was perfect, the best one yet, destined for obscurity on some random wall, but moderate, enjoyable, not even a touch of off-width, and it ended with an exciting exit, pulling on a giant flake, the crux move, up to a stance at the anchors.

The line, tentatively named No Take On The Flake, was a beauty, and if it were anywhere else in the Lower 48 it would have already been climbed. But this is the Utah desert, seemingly infinite with splitters. And, now it had to be free climbed.

With some hesitation I offered the first free ascent to my buddy Tim. Though he had been climbing at The Creek for as long as I had, he’d never been on virgin terrain, plus he was finally breaking into leading solid 5.11, the grade I expected this climb to go at. 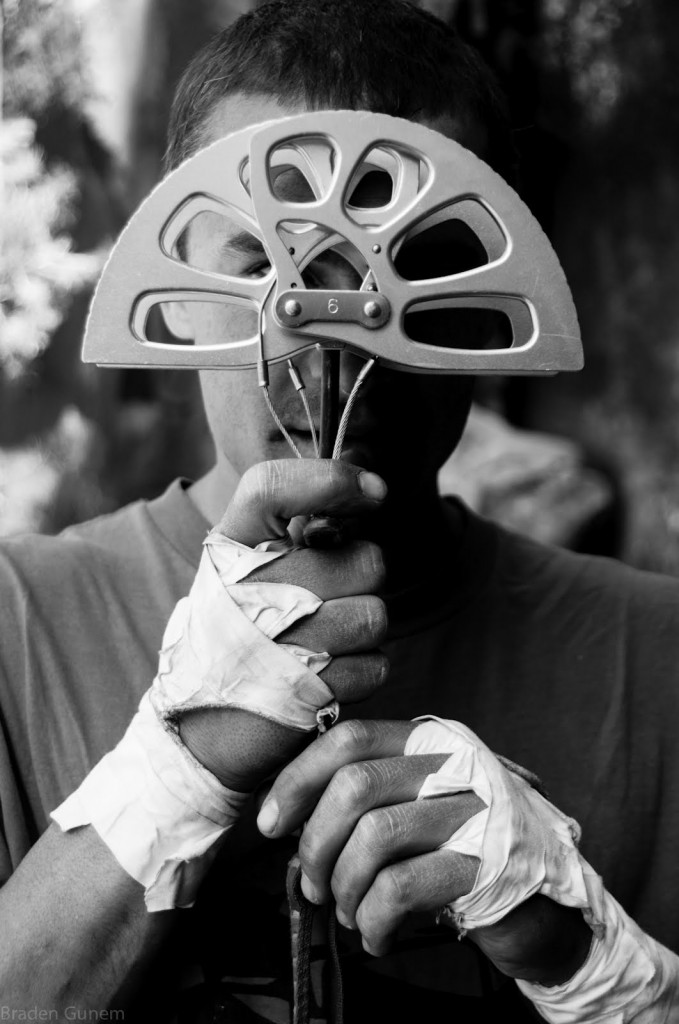 He led up, and arrived at the crux, where an old 3.5 camalot fits perfectly. He placed the gear and confidently climbed above, on the flake, which tried to spit him off. But, it didn’t. He endured and power liebacked to the anchors.

And then, I realized a deeper underlying essence to my Indian Creek experiences: sharing splitter cracks with friends. With a huge smile and a big hug we celebrated our greatest line yet.

Luke Mehall is the publisher of The Climbing Zine and the author of Climbing Out of Bed. His second book, The Great American Dirtbags will be published this spring from Benighted Publications.