This past June, climbers Harry Hamlin and Avery Parinello spent a couple weeks in the Ruth Gorge in Denali National Park. The Gorge is a mammoth glacial gorge cut into the lowlands below Denali by the Ruth Glacier. This enormous zone contains prodigious peaks that tempt rock climbers and ice climbers alike due to their immense size and spectacular exposure. The remote nature and sheer scale of this location make for a truly alpine experience. 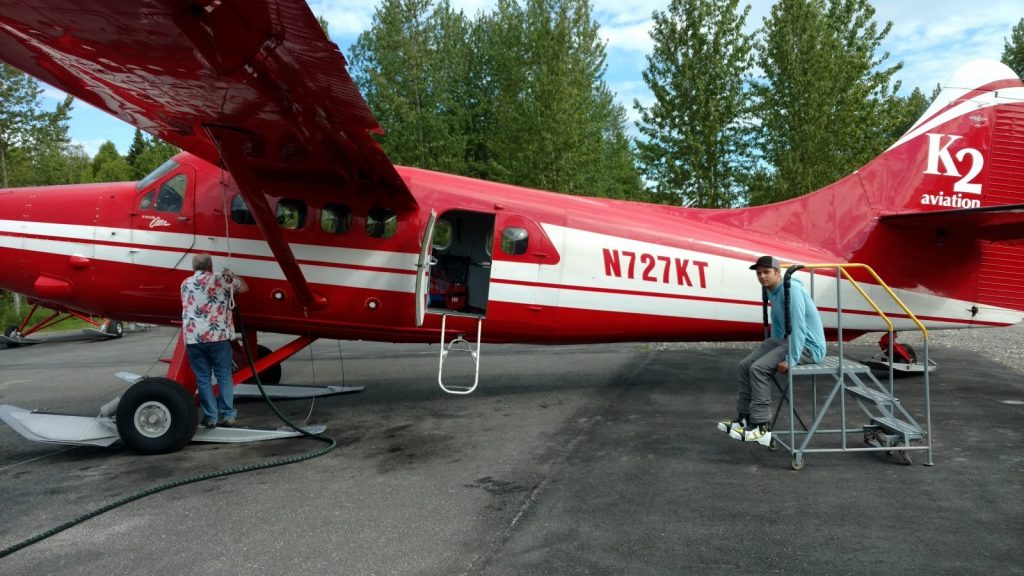 5 Things to Know Before You Go

By Harry Hamlin | Photos by @hamlinharrison

We were at breakfast in Talkeetna, dreaming of climbing objectives and discussing the possibilities of our upcoming trip. A call came in halfway through coffee and eggs telling us our plane was leaving in half an hour so we wolfed down our food and rushed to the tarmac. After being weighed with our gear, we piled into the plane and quickly taxied down the runway and took off.

The sublime beauty of the Ruth hit home as we dipped into the gorge; never had I seen so many big walls so close to each other. The vast snow floor created a flat expanse connecting the two edges of the gorge, the landscape proving to be much larger in person than I originally anticipated.

We landed in the middle of the glacier, and soon waved the pilot off before packing our gear onto sleds. The drone of the plane dissipated and we felt very alone as we began our skin to camp. The sky was a deep blue that stood out from the great white expanse of snow and glacier.

When we arrived at our planned base camp and began digging what would be our home for the next two weeks, the sound of the breeze was broken only by the crunch of our shovels in the snow. We erected our Remote 3 tent and began cooking dinner. The arctic sun’s traverse behind the tops of the peaks would leave us scrambling for jackets and shivering for a moment before it appeared again on its slow descent toward the horizon. 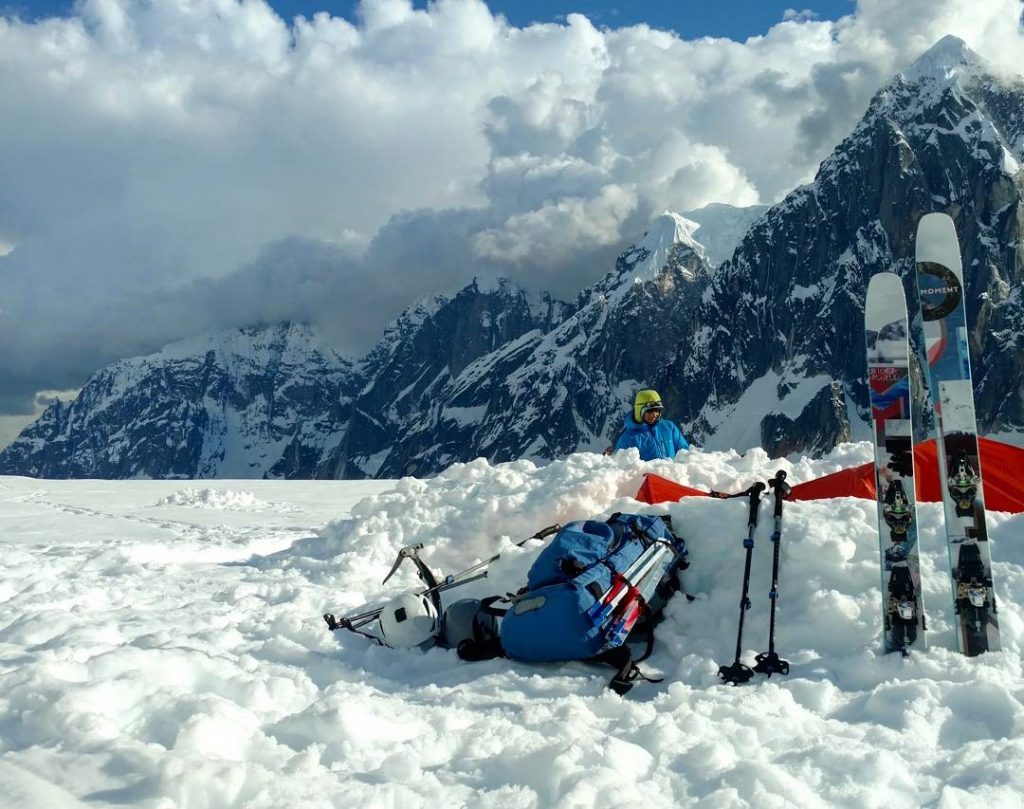 We came to rock climb, but in typical skier fashion we brought our skis and boots along with us; it had snowed nearly 6 feet the previous week. On day 2 we awoke to clear skies and warm temperatures and decided our first climb would be to the top of Mount Dickey via the West Face; this way we could obtain a bird’s eye view of the unfamiliar area and hopefully get a few ski turns in. Behind camp loomed Mt Bradley, Mt Wake, Mt Johnson, and Mt Church.

Dickey’s towering East Face overshadows all peaks surrounding it and contains the infamous Wine Bottle Route, a 51 pitch monstrosity of an alpine climb. We donned our skis and began skinning across the gorge toward a small offshoot of the main glacier. In order to gain access to this off-shoot, we had to travel over the glacier’s edge, an area overrun with enormous cracks—which yield glimpses of cathedral-sized caverns beneath.

After navigating the more hazardous portions of the glacier, we began the steep ascent to what’s known as 747 pass. As we traveled through the 30+ degree terrain, we noticed conditions that gave us pause and when we finally reached the 40 degree headwall, we decided that avalanche conditions were going to inhibit our ability to go further. Calling that our high point, we changed over and began our descent; we didn’t get the summit we had hoped for but we did get a few stellar turns. 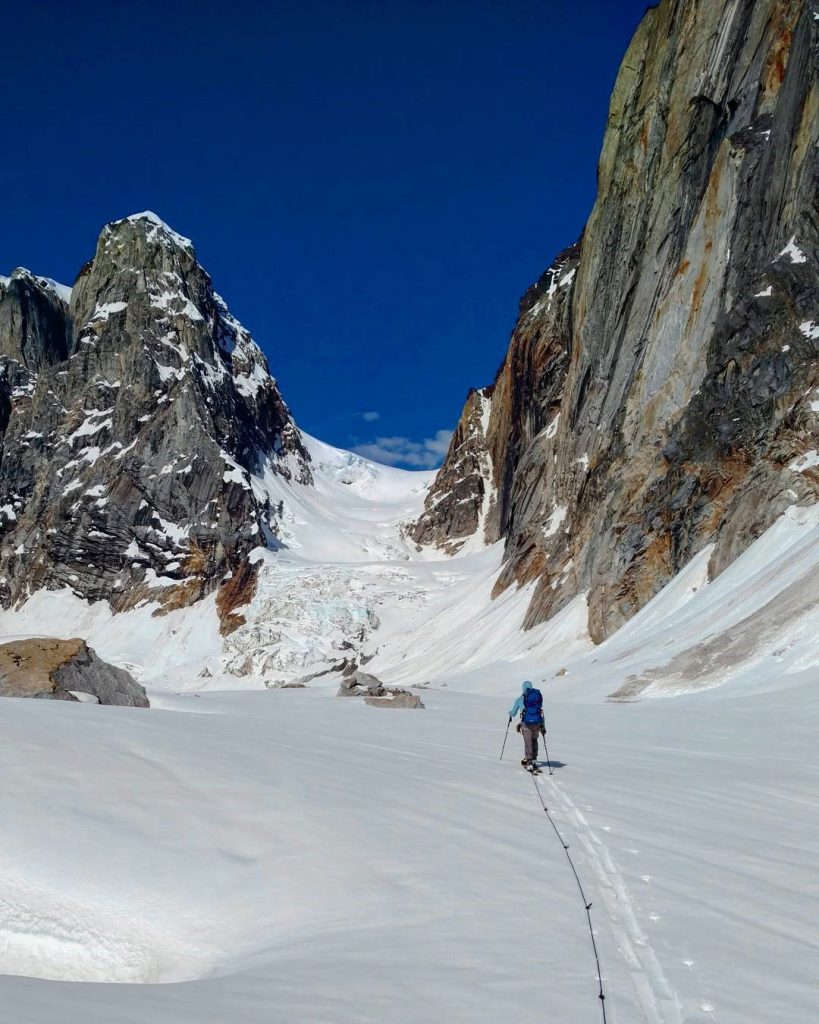 Day 3 we awoke and began our ascent to what would be our first rock objective. We used our satellite phone to call the Denali NPS automated weather report, which called for a mix of clouds and clear skies with a 50% chance of precipitation; such a broad-stroke forecast for such a large area left us relatively uninformed on the incoming weather. An area such as Denali tends to form its own weather patterns as air masses are forced violently upwards by the large protuberance the Alaska range creates in the landscape.

We left camp veiled in a slowly rising cloud layer and somewhat blindly ascended to the base of Goldfinger, a towering dihedral creating an aesthetic line up the rock formation known as The Stump.

We transitioned from skis to climbing shoes at the base of the route and quickly ascended above the cloud deck. We traded leads climbing many pitches of splitter corner hand and finger cracks; we felt the pump creep into our calves and feet as we spent pitch after pitch in stemming positions. The cloud deck continued to pursue us as we ascended the route, eventually enveloping us as we topped out the 5th pitch.

As we ascended the 6th (and what would be our final pitch) a light rain began to fall; as we topped out p6, the light rain turned to a downpour and we were forced to retreat. We rappelled and skied through the rain and eventually crawled into the tent, wet to the core. 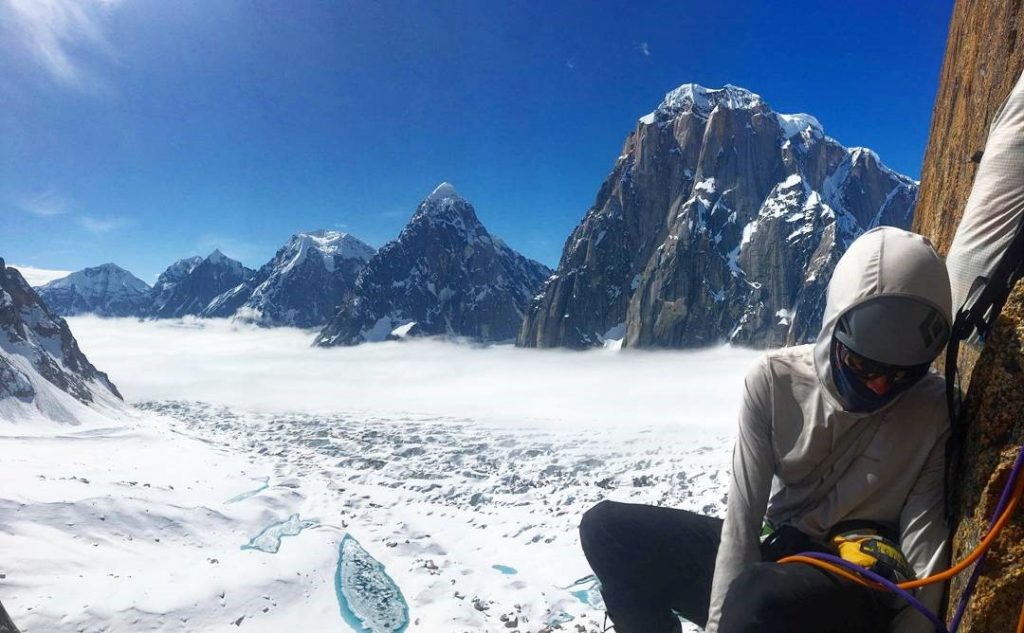 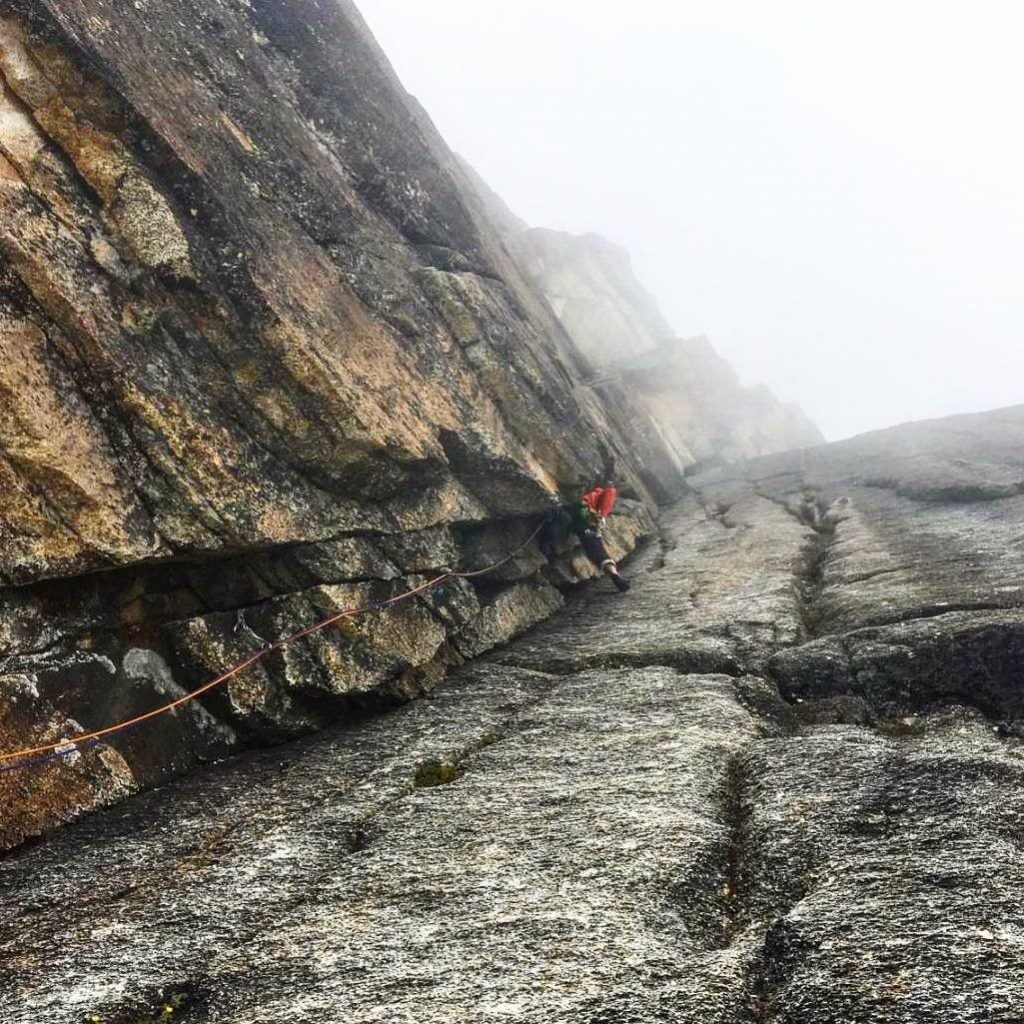 On Day 4 we awoke to the sharp sounds of rain on our tent fly so we concluded a rest day was in order.

Day 5 we awoke to clear skies and decided to attempt our second rock objective for the trip: The Hut Tower, a towering hulk of a rock at the south end of the gorge. We arose early and began the 3-hour skin to the base of the route. The sun shone through the ridge of “teeth” (the Moose’s Tooth, the Eye Tooth, the Sugar Tooth) as we departed and the silence in which we traveled was broken only by the gentle crunchy swish of our skis below us.

When we finally reached the base of the climb, we donned our climbing shoes and began the thousand foot scramble to the base of the route. We climbed the route in increasing high clouds with fingers crossed that we weren’t going to get rained out again. We swung leads focused on our goal, climbing through a few splitter hand-crack pitches, an off-width pitch, and a couple surprisingly difficult bouldery moves high on the route. We summited in the evening and ate and drank briefly before beginning the many long rappels to the base of the route. Excited to have completed such an outstanding climbing objective, we donned our skis and skins and began the long scoot back to camp in the bright arctic midnight. 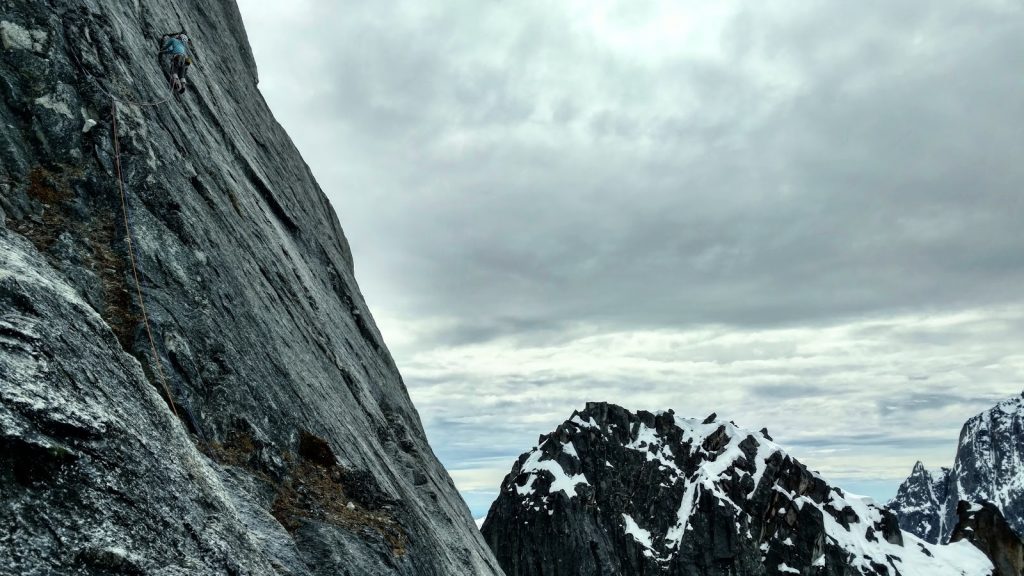 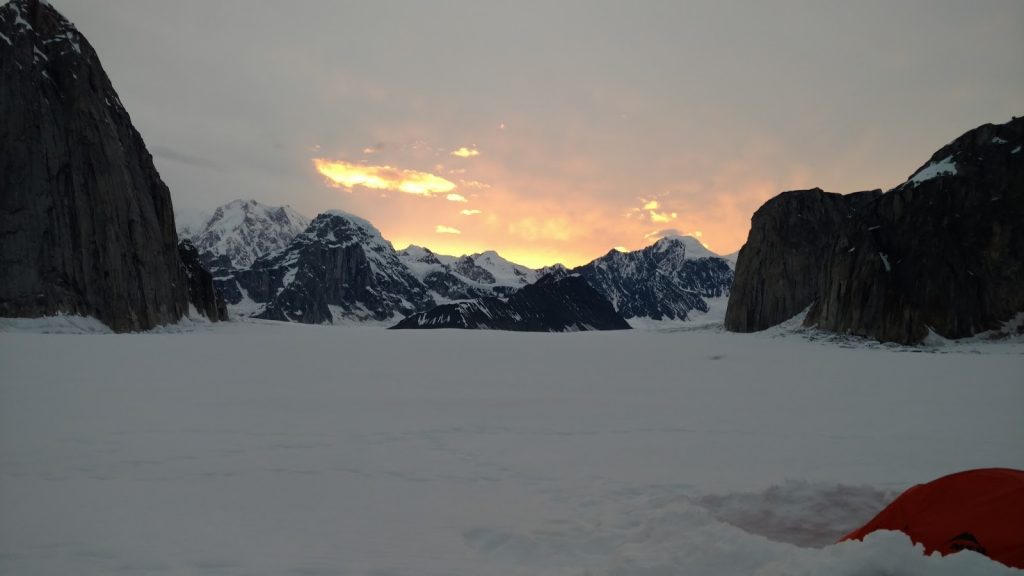 We returned to camp at 1 a.m. of day 6 and fell quickly asleep. We slept in on the morning of day 6 and awoke again to rainfall. Our daily satellite phone check of the NPS weather yielded a forecast of several small storm fronts rolling in off the arctic ocean.

As the weather cleared throughout the afternoon, we discussed the possibility of attempting the objective around which we had purposed our trip: the West Pillar of the Eye Tooth, a moderate 26 pitch route ascending an elegant pillar before traversing right up a looming headwall topping out on the iconic peak. We needed at least a 36 hour weather window due to the long time required to ascend and descend the route, and we hoped that we might luck out with a chunk of good weather before the first front hit us. 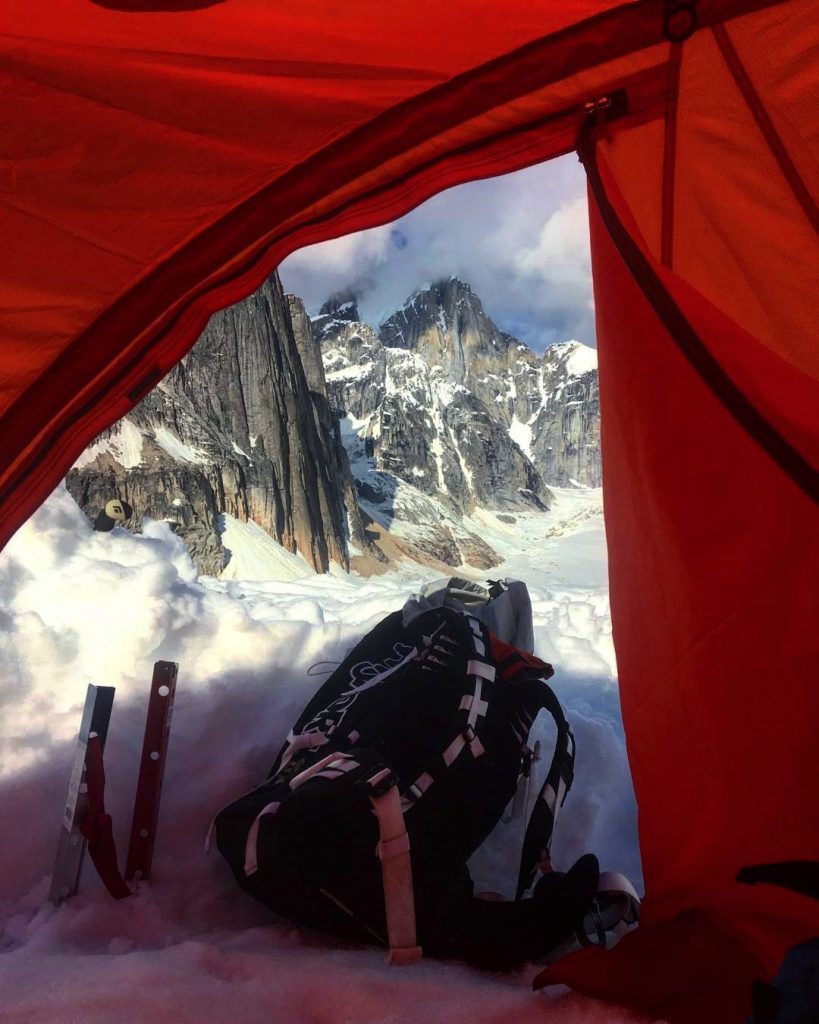 This idea was crushed as clouds descended upon us and we went to sleep that night deciding to wake up at 2am to recheck the weather. When we arose early on the morning of day 7, the sky was entirely obscured and the wind was quickly rising. It was immediately clear that the weather was rapidly changing and that we would not have the window required to ascend the Eye Tooth; however, it appeared as though we might have a small weather window before we were totally enveloped in the storm. We decided to take a quick crack at the Japanese Couloir, a 2,000 foot channel of moderate 60 degree snow and ice that ascends to a saddle just below the top of Mt Barrill; additionally, the Japanese Couloir also serves as a descent option for the famed Cobra Pillar, an alpine epic ascending the East Face of Mt Barrill.

We donned our skis and skins in the dim light and powered to the base of the route. We switched to climbing boots and began the ascent, soloing the route as quickly as we could, the Yosemite-like granite towering above us. Precipitation began falling as we approached the top two hours later and as we topped out, shaking the screaming barfies out of our hands, the rain began to fall with greater significance. We began a series of rappels down the route before downclimbing back to our skis, arriving a few hours after leaving them. We again returned to camp in the late morning, wet but excited to have climbed something in the short amount of time we had available. 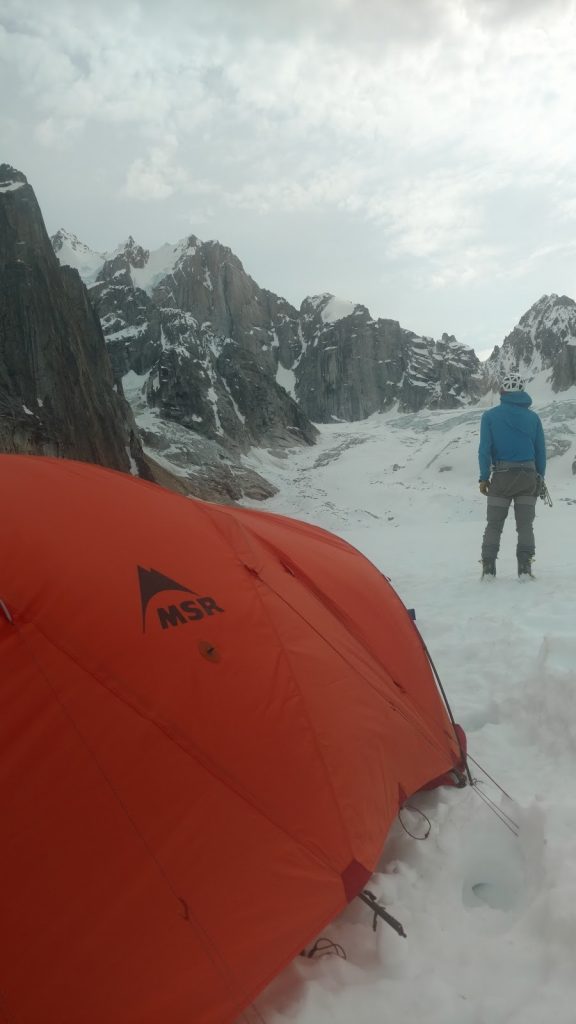 Soon after we returned to camp, the cloud deck crashed down upon the floor of the gorge and we were entirely enveloped in a wet soupy mess that would continue to plague us for the remainder of the trip. After 2 days being in the clouds with little visual reprieve, our sat phone weather check told us multiple low pressure systems were rolling in, one after another, from the Arctic Ocean. We decided it was time to pack up and relocate to our pick-up site several miles away. 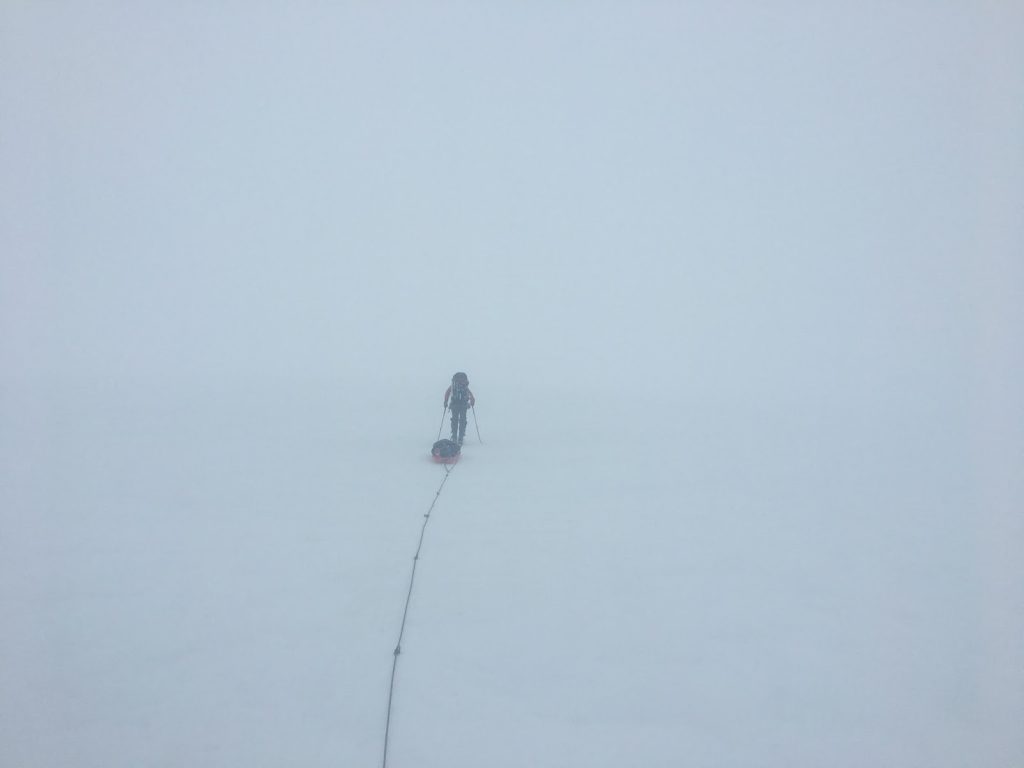 We paid close attention to our pre-designated navigation plan and eventually stumbled onto the runway that would be our pick up location several days later. We set up camp and had nothing left to do but wait. We listened intently for the sound of a propeller for several days and when we eventually heard it, we were excited to finally get out of the bad weather and make our way back to civilization.