It’s no PCT, AT, CDT, or Camino. The TA is its own irreplaceable beast—dangerous at times if you’re not prepared—but with a silver lining of beauty that, with an open mind, can change your life. Our team just completed the 3000 km long-distance trail, which stretches tip-to-tip across New Zealand’s two islands, and it’s safe to say we are far better humans than before we left.

Whether you’re a veteran thru-hiker or looking to tackle your first one with vigor, here are 6 reasons to take on the TA. 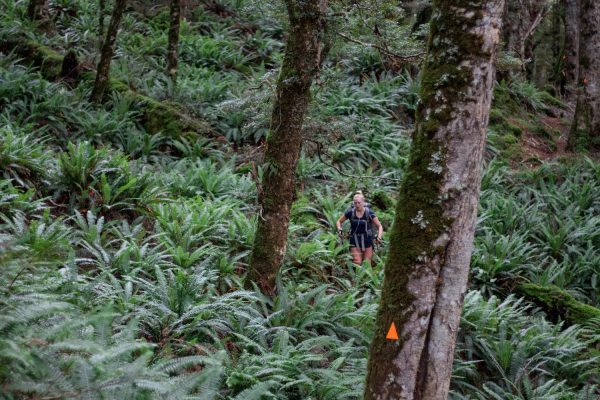 Te Araroa is young. It’s only been around for five years, with just over 1,000 hikers having finished the route since its opening in 2011. So, it’s very easy to get lost. Especially on the South Island, it became a daily occurrence. There’s nothing more frustrating on a thru-hike than having to tack an extra mile or two on top of what’s already going to be an eight-hour hiking day. But everything changed when we began to embrace Te Araroa’s innocent youth. Instead of side-stepping mud, we attacked the knee-high puddles. When we couldn’t find a marker, we consulted our iHikeGPS app as a modern-day compass. Don’t get me wrong, this was a huge adjustment period. Te Araroa forced us to make a choice – adapt with the unfamiliar, or step back into safety. It’s rough around the edges and will shake your mental strength to its core, exposing your true intentions. I wouldn’t have the trial any other way. 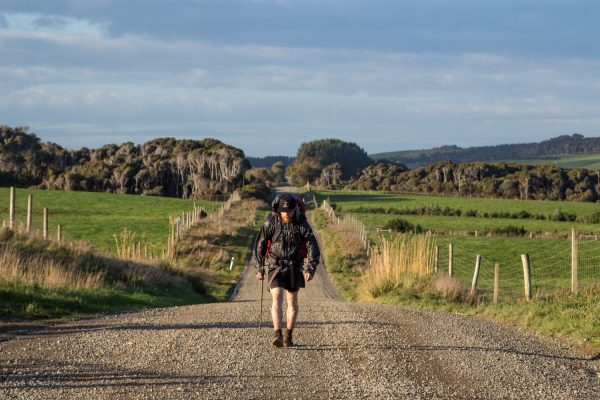 Te Araroa is an expression of the New Zealand culture. The country reveals itself to those who travel on foot, allowing for a full 360° view of New Zealand – coastal, mountainous, and urban. It starts in the North Island, which hosts 3/4 of the country’s population, where you experience the Kiwi people and their welcoming hospitality first-hand. Despite what most people think, New Zealand isn’t just a mountain paradise – especially in the North – it’s an agricultural mecca, boasting a lot of dairy farms, roads, and commercial forests. Even though those aren’t the sexiest landscapes to hike through, the personal interaction along the way with locals makes it well worth it.

The North Island also makes for a great warm-up for the South Island, where you step into true Lord of the Rings land. Choosing dirt over pavement in the South Island, you leave behind the noise of society. It’s remote, rugged, and borderline dangerous. This was our final impression on what it means to be a Kiwi, and it’s a direct reflection on their true-grit, self-sufficient culture. Kiwis are loving and open-minded, and equally as independent and tenacious. New Zealand has a reputation that you’ve got to work for it, and that same attitude echoes onto Te Araroa.

The rivers in New Zealand are no joke, especially when rain is in the forecast. Some fast-moving rivers with elusive under currents can easily take your life if you’re not careful. Since hiking is one of New Zealand’s great pastimes, DOC (Department of Conservation) built swinging bridges for the public. Bolted down on two cliff-sides, swinging bridges all caution a maximum amount of people. The most intimidating part of all? One person maximum. There’s definitely a strategy with crossing these bridges – always step on solid foundation, not on the nets, because those can easily break. At one point we were surprised with a tight-rope “bridge” that was only three wires. If you’re deathly afraid of heights this is definitely something to consider before entering the Tararua Range at the bottom of the North Island, or practically any stretch on the South Island. Large mountain ranges are bordered by raging rivers, so you will usually enter the range from a swinging bridge and exit on one. 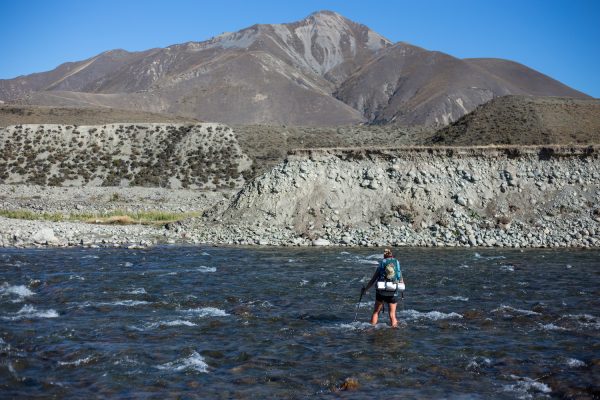 When there’s not a swinging bridge available, you have no option but your own two feet to ford the river. If heavy rainfall makes the river suddenly rise, the TA usually has a flood track to detour around. Those tracks are cut straight into the side of a mountain, so you’re almost guaranteed to be trudging sideways for an extra few hours. Weather permitting, we would always prefer walking in and across the rivers. Some rivers were up to our ankles, but most were at least up to our knees, and one sketchy time the flow was chest-height. We would take extra time finding the best path – one without any eddies or sudden drop offs – and make sure to attack the rivers diagonally, whenever we could, crossing them together and each maintaining three points of contact (i.e. one foot, two poles). 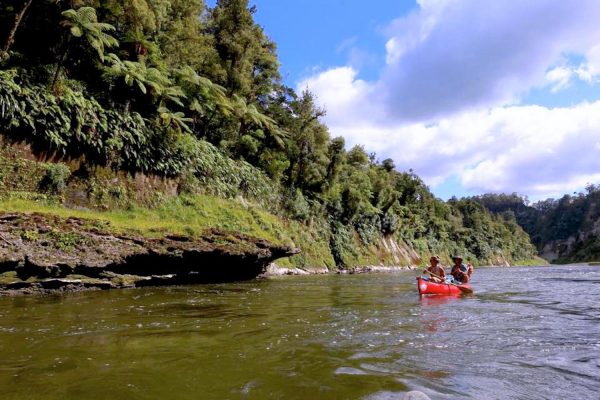 While the rivers do present tough challenges, they also allow for a truly unique experience. For eight days, TA thru-hikers have the option of trading their trekking poles for paddles and canoeing the Whanganui River. We jumped at this opportunity. Right after the Tangariro crossing and 1000 kilometer mark, those eight days served as a time to rest injuries and set intentions for the challenging 2000 kilometers up ahead. We dubbed this time “TA Spring Break” since we didn’t have to monitor the weight of our food (and alcohol), with luxurious canoe barrels. 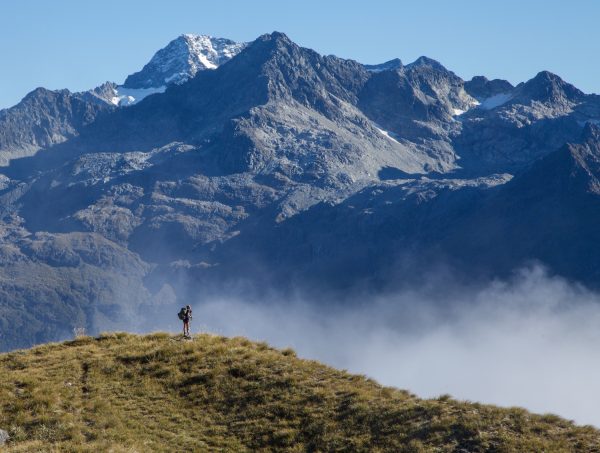 The South Island is desolate. There are less people, there’s less cell-phone reception, and most of the time it’s just you and the mountains. There are so many unimaginable places—moments that make your jaw drop and evaluate how you want to experience life. It clears space to be truly alone with your own thoughts and is an expedition rooted in self-dependency. 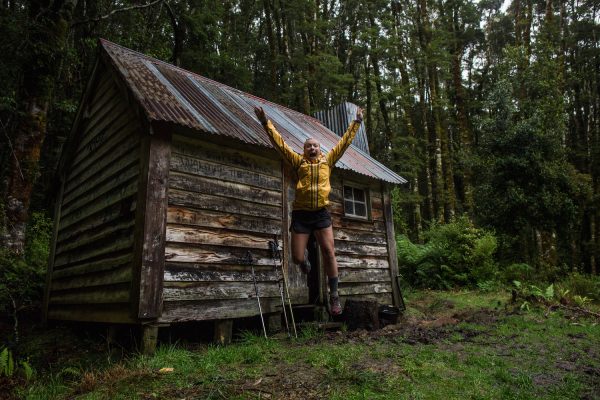 Living out of a tent for five months is freeing and simple, but can be lonely and cold. Te Araroa presents a unique luxury that we don’t have in the states – backcountry huts. New Zealand as a whole has over 900 backcountry huts. No, not open-air shelters. These are full-fledged mini-houses, with bunks, a fireplace, table and chairs. All you need is a backcountry hut pass, which costs around $90 for a year. The other beauty of huts is that they each host a reliable water source, whether it’s a rainwater tank or a nearby river. Each hut is different, boasting its own unique character – some built back in the 1960s with old-school fireplaces, others with a modern take. Huts make for great destinations, and the TA did a solid job of placing each hut within a realistic trekking distance of one another. DOC takes immaculate care of their huts – they fly out, yes fly, with a helicopter, to each hut to maintain the outhouse, water supply and other amenities. Huts also make for great ways to keep track of fellow hikers with the hut books. There’s no service in the mountains, so the best way to communicate is by writing in hut books. 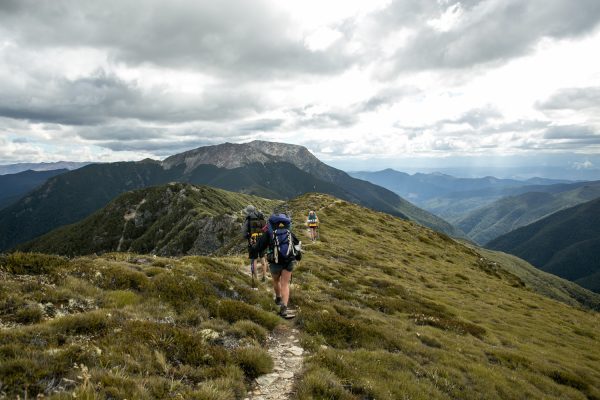 When you’re hiking – I mean scrambling – up a 1700 meter peak in nearly white-out conditions, your life depends on maintaining intense focus. One particular stretch is notorious on the TA for these type of situations, and it also happens to be the longest stretch. The 10-day Richmond Range stretch is not to be taken lightly. It’s the first large mountain stretch on the South Island – a true crash-course to New Zealand’s high country. You’re miles away from cities, towns, or help. If you make a bad decision up there you’re exposed and you could be in trouble. After you survive the Richmond Range, there is no rest. You still have to tackle three other passes down the spine of the Southern Alps, totaling out to a month of desolate tramping. Because of this, the Richmond Range – Nelson Lakes – Harper’s Pass – Arthur’s Pass round ended up surprising us as our favorite month on the entire trail. The increased danger heightened our senses. Less cell-phone reception meant better fireside conversations. In these most hazardous times, the TA exposed our true character and progress as outdoorsmen and women. When we had conquered that stretch, we felt like we could do anything – both on the trail and in life. It was unruly, and so were we. 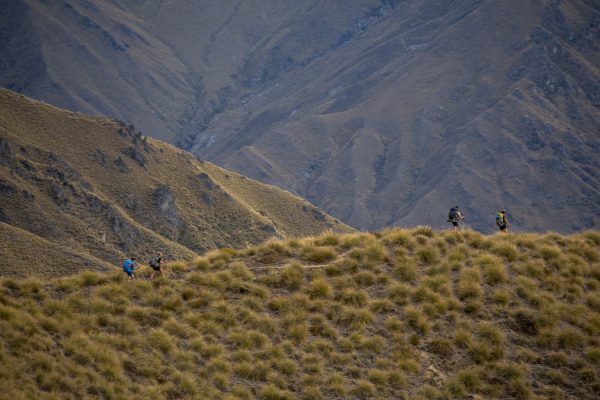 A commonly heard hiker adage goes: “There’s no wrong way to do a thru-hike, but if it didn’t change you, you didn’t do it right.” Trails like New Zealand’s Te Araroa can change us, only if we dare to embrace the next unknown turn up ahead. 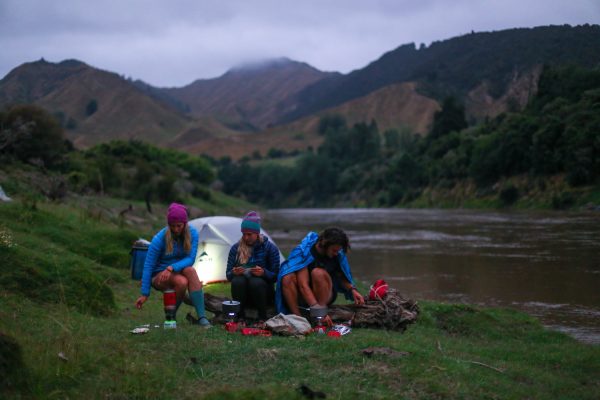 Comfort Theory’s New Zealand project will culminate in a web series on OutsideTelevision.com. For more info on the premiere head over to comforttheory.com or follow @thecomforttheory