Photos and Story By Ben Kunz

When Daimler Benz merged with Chrysler way back in 1998, it wasn’t even a blip on my radar, nothing that I needed to worry or care about! But within a year, I started seeing the Sprinter Van, Mercedes gift to North American mid-sized cargo carriers. When I first saw this hardcore Euro-styled van, I did some research and quickly did the math on these genius homes on wheels. The Sprinter could very well be the best road tripping van a person could imagine with its highly fuel-efficient, five cylinder Mercedes turbo diesel engine, a road life commonly surpassing 500,000 miles, a high roof that allows anyone up to about 6 feet tall to stand up, a turning radius better than a Buick sedan and barebones interior that allows for limitless modifications. 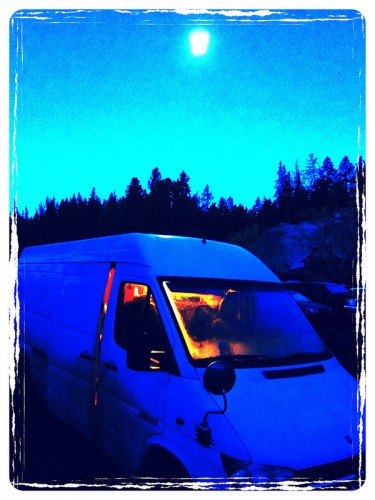 But of course, being a dirtbag, the sticker price said “small airplane” to me, and it would take some time for the used market to grow to the point that I could maybe afford one! But a seed was planted and for well over five years I watched Craigslist, government auctions and even stopped in a dealership or two to drool over the latest models.

And then in the middle of winter in 2011, the perfect Sprinter appeared on Craigslist, on Whidbey Island, WA, of all places. Well, it wasn’t perfect. It was the largest Sprinter model at just over 22 feet long with dually tires, not really the model my wife and I wanted. Oh, and it had a “major” transmission issue—the automatic transmission didn’t shift between 2nd to 3rd gear. But it was over $7000 cheaper than any other “reasonably” used Sprinter I’d eyed thus far.

I made the call to the owner, looked up the ferry timetables and biked to Mukilteo, a mere 23 miles north of Seattle. I was “just going to have a look” but not taking a car over meant a cheaper ferry ride and just maybe more motivation to just buy it and drive it home!

Fast forward several months… we bought the Sprinter, named him Sarge, and immediately went to work to convert him into our perfect road tripping van. Despite all intentions to throw a queen sized bed in the back, dump in some Rubbermaids full of gear and call things good enough to hit the road, we took that far-too-adult step back and did some research and developed a detailed plan, complete with prototypes in some cases. Here’s a few tips we learned on building out our own dream Sprinter:

• Do your research. The Sprinter source forum has a staggering amount of info and was the single best resource for our build out.

• Think hard through your storage—what you’ll be packing and where it fits best. When building custom cabinets or the like, go through your stuff and where you’ll put it before building! Space is premium and every square inch you can use wisely pays off in dividends.

• Prioritize your big expenditure items. We prioritized 3 things: insulation (for both sound and comfort) with the RaamMat, no more mess with ice and always a cold beer with an ultra-efficient NovaKool fridge, and going off the grid with solar panels hooked to two deep-cycle batteries.

• Get crafty about where you can spend less. We saved money on tools by borrowing from neighbors, saved money on bedding by buying old crash pad foam from our climbing gym and upholstering it ourselves, and saved both money and time by buying shelving and cabinets from the Goodwill and other second hand stores where exact dimensions weren’t critical.

The magic of our Sprinter is its comfort and its economy; for us, it really makes a long road trip all that much better! Having the space to toss down backpacks and ropes after climbing all day, still make dinner and sleep without having to put everything away right away is a real treat. And knowing that your Sprinter looks more like a cargo van than an RV makes city camping safer and easier—a big white box really doesn’t attract much attention! They just don’t know you’re enjoying a fine dinner with red wine behind those shiny window covers! And getting mileage in the mid-twenties means you never have to think twice about taking it on even short weekend trips over taking your car!