In the nineties (and before), we didn’t have cell phones. If you wanted to find the best route to the top of the mountain, you hiked to the bottom, looked at it with a spotting scope and then went up to see if it would go. And when you went into the backcountry, you either went with a partner you believed would carry you out if necessary, or you accepted the idea you might not come out.

And! We had to hike uphill BOTH WAYS!

Adventure has changed a lot since the advent of cell phones, sat phones, PLBs, helicopters and Google Earth: If you really want to and if you have the right tool, you can communicate with other humans from any corner of the planet.

I spend at least 25% of every day in areas where cell phones don’t work. On some trips, it will be 100% of all the days. I have been present for fatalities and accidents, and situations where we had a missing person in a large area of wilderness who wasn’t responding by radio. Communication devices aren’t magic genie lamps that will make any outing safe. You do need to be conscious to use them, the batteries have to be working, you have to be in satellite range (open view of sky) and you can’t lose them—all things that sound really simple but aren’t guaranteed in an emergency situation. In a climbing situation, if you’re stuck somewhere really hard to reach, you may well be on your own for a really long time even if you’re able to call for a rescue. You may be somewhere a helicopter can’t get to.

Well, none of this is news to anyone who goes into the backcountry, but these are the things I think about and that I want to be prepared for. Fast and light has always been my mantra, so I’m not going to be lugging around a huge emergency kit. At the same time, I believe there are a few truly essential items I’d be really glad to have if I found myself in a pinch somewhere. 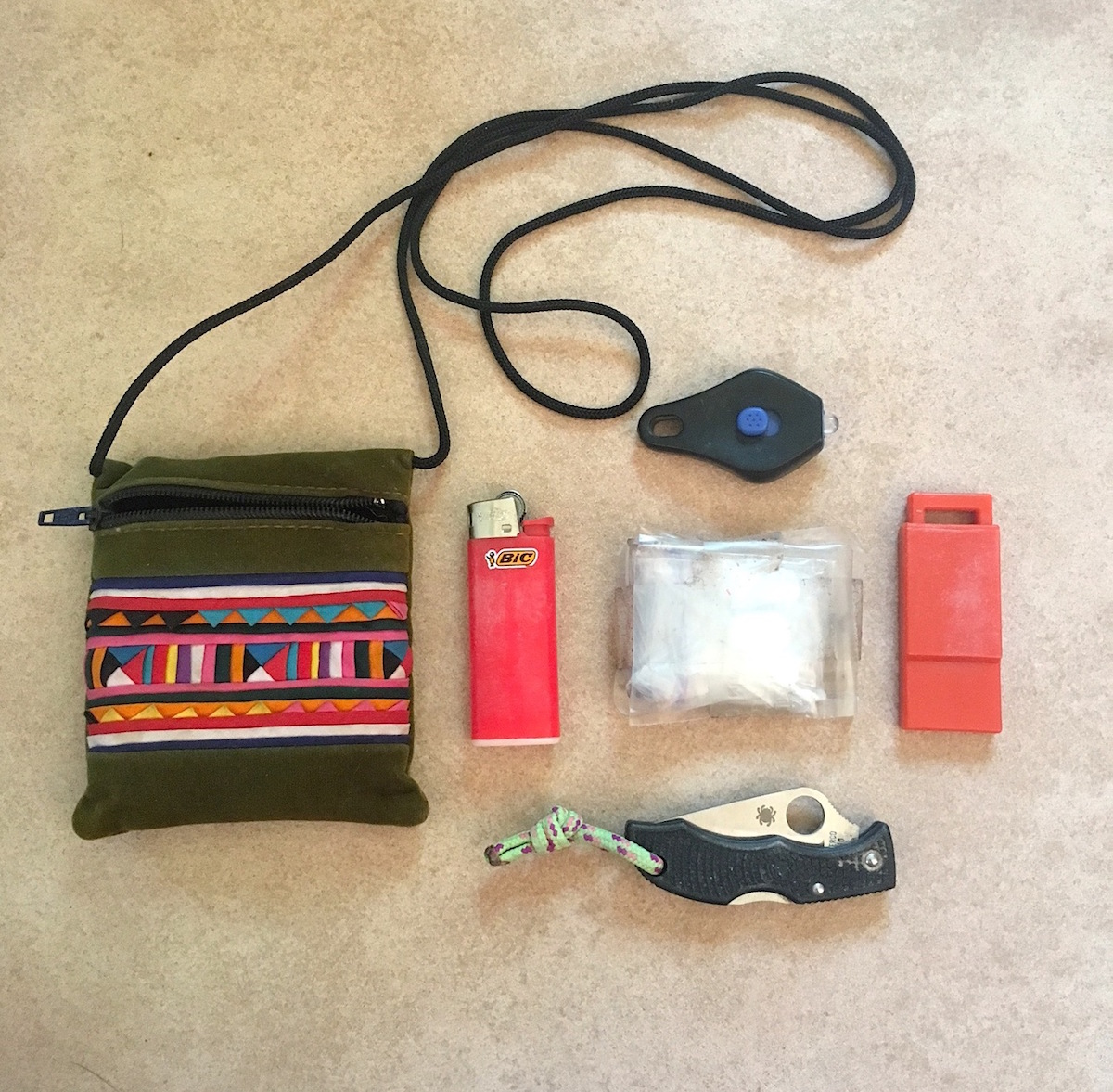 My bare essentials emergency kit fits in a tiny pouch that can be worn around my neck (when wingsuit flying or alpine climbing) or kept in the top of my pack (when hiking), and I like to have this with me when I’m out and about. My essentials are an LED light, a mini lighter, a tiny serrated knife, a whistle and prescription pain meds (that I was given for ACL surgery and obviously just took ibuprofen instead and saved these for my emergency kit).

With a lighter, you can make a fire and survive and also be seen. With the whistle, you can make noise (you can’t scream all that long) easily. With pain meds you have a better chance of limping or crawling out of somewhere by yourself if you have to. And with the LED light, you may be able to see enough to find some wood for your fire or signal in the night. The knife has a small cord loop on it, so I can hang it off the pouch lanyard if I need to have it out and don’t want to worry about dropping it. When I pack these things into the pouch, I make sure the knife and the lighter are on the top, since I figure those are the most absolute crucial items and I’d hate to drop them because I had to dig through the pouch with one hand or frozen hands. 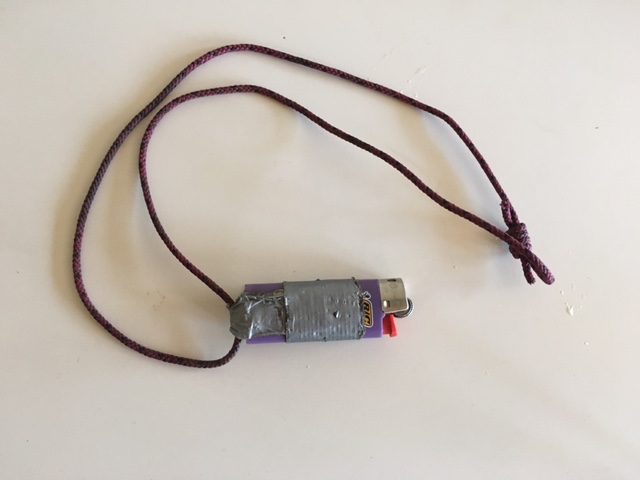 I have a super duper minimalist emergency kit for running on trails in Moab in the winter, which is simply a mini lighter with a cord taped to it. A few years ago (in a very snowy Moab winter) an accomplished local ultrarunner slipped on an icy ledge on the Jackson’s Loop trail (a trail I run all the time), fell 30 feet and broke her hip. She spent the night alone there and was found the next day because her dog ran to the parking lot and refused to leave until a rescue team went up the trail with the dog. I figure it’s always better to have a lighter than not to have one—if you got stuck somewhere and could get to wood or shrubs, you’d stay warm and people could see you—and now I always keep it around my neck when running alone in the cold months.

If I’m in a very minimalist climbing situation, I have the knife clipped to my harness, a small roll of tape and the painkillers.

I generally also have my cell phone on a lanyard around my neck—mostly because I like taking photos all the time (or listening to music if I’m running), but also because it’s always handy that way and if I’m in a place that has cell service, that could be a bonus. 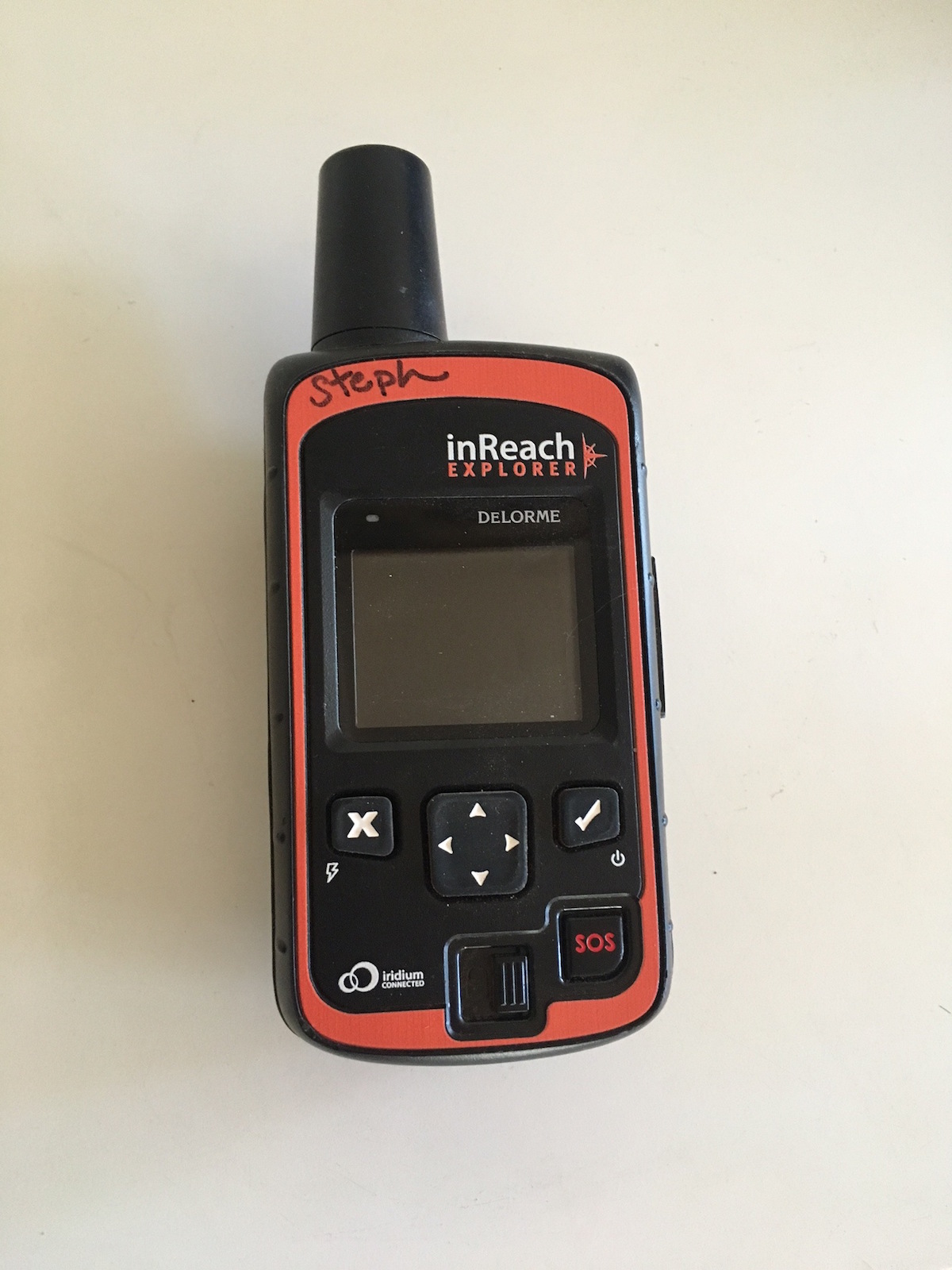 I also use a Delorme InReach emergency device. Mainly I have this device for what I call “the nuclear option”–you push the SOS button and a global search and rescue center receives your GPS coordinates and coordinates a rescue. But with this device, I can also send text messages or emails by a satellite connection (where my cell phone doesn’t work), and I can also tell it to track my location so others can see where I am if I suddenly stop communicating. Being able to text or email people is an important feature—if I simply have a non-urgent emergency like a broken car or a sprained ankle, I’d rather call a friend than a rescue team. My network of friends includes some of the best climbers and riggers in the world, and I’m more likely to want some of them than a local SAR team, in a vertical environment. In recent times, the base jumping/climbing community has been coordinating and carrying out our own rescues and recoveries by flying in our own climbing teams for really complicated scenarios that the local SAR teams don’t want to take on.

I keep the InReach in my car all the time—how many times have you been driving across Nevada with no cell service hoping you don’t have a breakdown?—and take it with me when I leave the car, especially since almost everywhere I hike around my hometown of Moab is out of cell range. And emergencies aside, it’s great to have a way to text in areas where the cell phones don’t work, just to say hi, I love you, or be home in an hour.

It’s good to be realistic about the environments you’re moving in and think about carrying some very small but useful items you might end up needing someday.

Having an emergency kit doesn’t mean you’re now on a permanent toprope in life, but it does mean you have some things you might be really glad you brought if things suddenly get complicated.

Steph Davis is one of the world’s leading women climbers. She is also an avid BASE jumper and wingsuit pilot. Among her many accomplishments, she has completed free ascents of El Capitan, first ascents in South America, the Karakorum and the Arctic, and some of the hardest climbs worldwide. Considered a rock climbing visionary, Steph lives in Moab, Utah, or sometimes out of a Honda Fit, in a tent, or in her off-the-grid octagonal cabin near Indian Creek. She is a writer, loves to cook and believes in living a simple life.