Our guide for the week was Steve Ludwig, lodge owner and one of the most experienced guides in Canada. Steve has over 31 years of experience; with his knowledge of the area we had exactly the man to lead the group. Steve and partner Dana have poured their hearts into this lodge. They truly love ski touring, mountaineering, guiding and showing new groups around the terrain they call home. Steve’s insights, stories and history really made this more than just another ski touring trip.

With Jim’s meticulously organized meal plan and several cases of beer we made the 30-km sled ride to the lodge. The forecast for the week was calling for clear skies and cold temperatures. There had not been any significant snowfall for nearly 3weeks, which made for extremely stable avalanche conditions. Morning one of ski touring started on a clear -23 Celsius day. It was cold but we knew once we gained the ridgeline we would be basking in the sun. We brewed up fresh coffee over my Reactor stove, ate a hearty breakfast and set off skinning towards the ridgeline. We were en route to a zone that Google Earth wizard Ian Provo had been scoping on the computer the night prior. It appeared to be a wall of northerly facing, sustained, 1000m+ couloirs. The wall showed great potential from the satellite imagery.

We gained ridgetop, rounded the top of the bowl and got eyes on our destination. Sure enough, it was riddled with narrow chutes enclosed by 100+ rock walls. There was one couloir that stuck out above all the others. Long and dramatic, this couloir was the clear prize for the week.

Accessibility was an issue. The couloir was surrounded by knife-edge ridges and left us with two options: boot pack up the couloir or approach from the backside of the ridge through a small cull at the entrance of the couloir. Both options were plenty of effort and a full day’s mission. We made a couple laps to finish off a successful day and headed back to the cabin with thoughts of the couloir fresh in our minds. 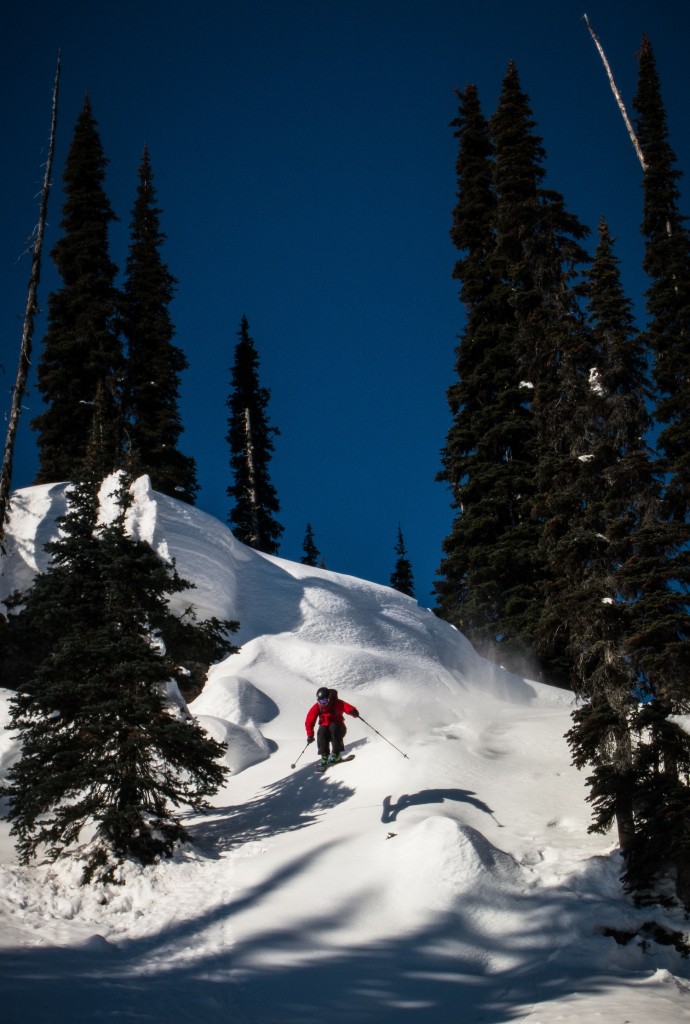 That night we planned our route and decided that the approach from the back would be the best. The fact that we could approach from the back, ski the couloir and ski tour out, was quite unique. In most situations, especially with a couloir of this size, we would boot pack up and ski back down. It was back to Google Earth and the GPS to finalize our route.The next morning we started the 5-hour approach to the top of what would be called the Strait Couloir. We reached the top of the line and looked down the 1000+ meters to the valley that runs into Strait Lake and Wells Grey National Park. Steve assured us that this was a first descent and one of the longer sustained lines in the area. After catching our breath and packing away our skins, Ian dropped in for the exposed first turns at the top of the chute. It was clear that the snow was variable at best. The steepness ensured the chute sloughed out regularly, leaving a harder bed surface below. Ian skied it confidently and with great control. We took our time, making each turn count, skiing safely and calculated while appreciating the turns under the 100-foot rock wall to our left. We worked the sides of the chute and found some soft turns and great isolated pockets. The line offered up some technical points. We navigated ice, rocks and several narrow sections where even with firm conditions; it was necessary to watch your slough. We skied the chute in three segments. Each point letting someone new take the lead and enjoy some fresh tracks down our first descent. Exiting the bottom apron together, we enjoyed the last turns of the line in the sunshine. We skinned out of the bowl and enjoyed the last run back to the cabin in the alpenglow—a perfect finish to the day.

It was a descent I won’t soon forget. It was the longest couloir I have skied in BC and it was great putting a first descent down such a dramatic line with an awesome group of people. There is a great reward successfully skiing a large line, spending dawn till dusk accomplishing it. We set out with a goal in mind, planned the route, managed the problems and risks and executed on our plan successfully as a team. It’s big adventures that are the reason you set out to places like Snowy Mountain Lodge. And it’s a place like Snowy Mountain Lodge that gives you the ability to take on those big adventures.