Story and photos by Keenan Murray

A brotherhood of devotion. Sinuously dangling in the breeze, it is the last connection and the vehicle of strength from one friend to another. Out of respect for the thin line of life, I cherish it — take care of it, for I know that it will guard against more than an unexpected meeting with the stone cold ground. The words of Royal Robbins run through my head: “Climbing is a great game — great not in spite of the demands it makes, but because of them. Great because it will not let us give half of ourselves — it demands all of us. It demands our best.” Not only is the team physically bound together by the rope; it is the mental, emotional, and almost spiritual connection to one another that can be a saving grace. The steadfast presence when mother nature wants you all to herself, and an unfailingly reliable extension of the will to be alive. The façade of life in a mediocre world is ripped away and what is left other than the climbers? The stark black and white reality of life and death, the last real, slim connection to it and the reminder of how wonderful and fragile it is on the edge. It is a sobering reminder that we must return to earthly confinement, and a hopeful thought that we can return to this place where time no longer exists, only breaths. Only clinging to the idea that with this companion we can make it back to this altered, genuinely human, state of being. 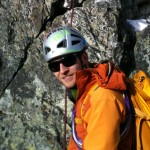 Keenan Murray works as MSR’s Dealer Rep for the Pacific Rim and International territories. His love of alpine climbing was sparked by a NOLS course to Canada’s Waddington Range in 2011. Two instructional courses with the American Alpine Institute in the summer of 2012 opened his eyes to Washington’s potential. Shortly after, he escaped the dangerously hot summers and disastrously cold winters of Oklahoma for climbing and ultra running in Washington State.