Picture this: a bunch of svelte mountain athletes rabbiting between slack-lining, base-jumping, paragliding, and free-soloing…wearing clown shoes. All at a frenetic pace set to music that’s better suited to a big top than an outdoor film. This mash up of skilled athletes and acrobatic circus performers is the premise behind the French film, Petit Bus Rouge (or Little Red Bus, as it translates). It’s a sure audience-pleaser scheduled for this year’s Radical Reels tour.

Starting February 26, 2015, in Salt Lake City, Radical Reels—a selection of high-adrenaline, dynamic films anchored in outdoor sports—kicks off its tour of 100 shows around the world. About 70 of those will take place in Canada and the U.S. Of the eight films on the docket, Petit Bus Rouge might be the most unique, but the other seven are sure to keep the audience engaged as well. Think mountain biking meets snowboarding; remote, high-desert ice-climbing; whitewater kayaks careening down waterfalls; and Yosemite’s underbelly climbing scene.

Radical Reels has become a tradition at the Banff Mountain Film Festival—it’s held annually on a Tuesday night during the nine-day cinematic fiesta. Because of its popularity, the night of action sports films went on tour starting in 2004 and has kept up every year since. Its success can also hang its hat on its notable sponsors including National Geographic, The North Face, Buff, Deuter and a few other brands. New this year, MSR will take a seat at that table as co-presenting sponsor with National Geographic.

“MSR has been a proud sponsor of the Banff Mountain Film Festival for 13 years,” says MSR’s marketing director, Jane Mauser. “For 2015, we’re switching it up. We admire the fresh and energetic passion for the outdoors that comes to life at Radical Reels.”

She also calls the Radical Reels audience “spunky,” which is an entirely accurate way to characterize the entire energetic, humorous and crazy feel to the entire event.

Banff Mountain Film Festival tour director, Jim Baker, couldn’t agree more that the relationship is a symbiotic one. “When we look at the different sports involved, there is a connection with MSR’s heritage and focus on adventure and chasing your dreams,” he says. “The type of people who come are the ones who have been using MSR’s equipment over the years.”

After Salt Lake City, the tour will move on to Colorado, Washington, British Columbia, Texas and Minnesota in early 2015. Come September, it will finish up the year in Alaska, California, Montana and New York, among other major locations throughout North America, many on college and university campuses. In Banff, Radical Reels will be held on Tuesday, November 3rd during the Banff Mountain Film Festival, October 31-November 8.

Movies aside, attendees can also win prizes from the festival’s sponsors such as MSR’s new fast, efficient WindBurner stove, as well as enter to win a grand prize online. And if you don’t win, well, at least you’ll get to see clowns cart-wheeling along knife-edge ridgelines in Petit Bus Rouge. 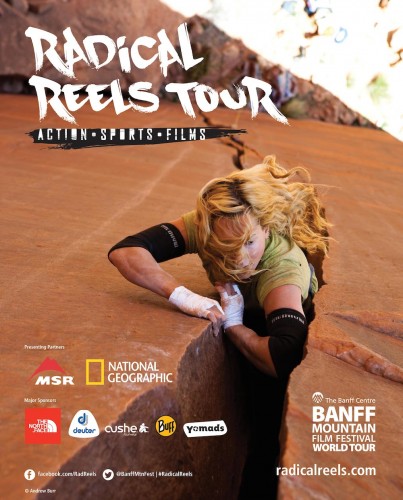 For a more information and a full schedule for the Radical Reels tour, head to radicalreels.com.

Ali Carr Troxell is an outdoor gear expert, adventure travel writer, television personality and PR maven at Hayter Communications. Her most recent stint included editorial strategy and execution at Microsoft to launch their in-house travel and food and drink apps, with global audiences in the millions. She was also an editor at Outside magazine for almost six years. Away from the desk, she loves to explore her Pacific Northwest home, doing everything from hiking and camping to backcountry snowboarding, and surfing. She is a certified yoga teacher.