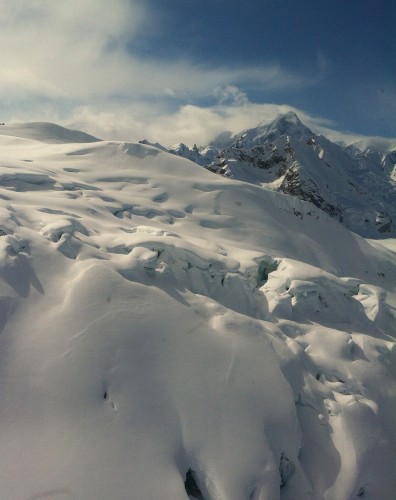 Story and photos by Holly Walker

“There’s a lot of air up here!”, I exclaimed, the seemingly endless Capps Glacier and everything beyond it making me as excited as a little schoolgirl. The Anchorage mountaineers stared at me as I sat in their kitchen tent and I realized how silly I must have sounded. I was comparing Alaska to the Lower 48 and was enjoying the lack of cars, busy roads and crammed airspace. 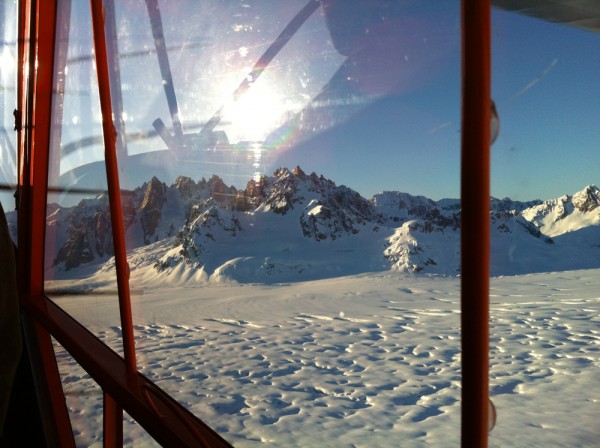 My pilot friend Jake Soplando and I had just landed on the Capps Glacier in the Tordrillo Range in his personal Piper Super Cub airplane. Moments ago we were soaring above the snow as it sparkled in the alpenglow, watching the enormous peaks and hundreds of crevasses light up with a soft pink hue.

“Jake, what are you and your plane doing over the next few weeks?” I asked.

He had to fly back to the civilization of Willow and install a new engine into his two-seated, single-engine monoplane before heading to the Kenai Peninsula to test it out.

“That sounds awesome!” I said.

“Guess it’s a good thing it has two seats.”

I told him I would be ready to take-off from the Lake Hood airport in Anchorage in two weeks.  I still had some ski mountaineering objectives to tick off my list before the next adventure. 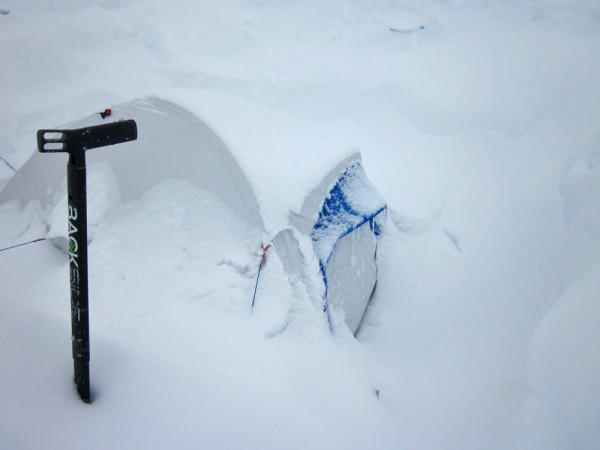 Winter weather suddenly hit the Chugach Range leaving us tent bound for days in minus 10 degrees Fahrenheit with intense snowfall hammering our tent. The sun finally returned and I was happy to invite myself plane-camping with Jake. We loaded the Cub with camping gear and food for six days; I had packed a small backpack with a change of clothes, a beanie, toothbrush, notebook and my camera. 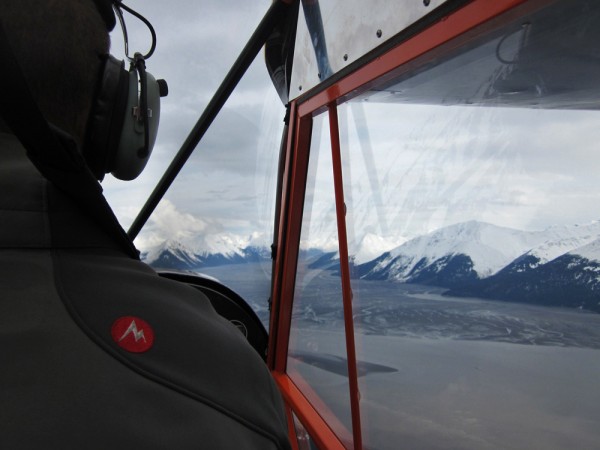 The Super Cub flew steady in the calm winds above the Turnagain Arm, a rare weather pattern for the Cook Inlet. As we passed over Girdwood I waved at the skiers on the slopes of Alyeska Resort. We jogged the corner and continued following along the Seward Highway inland onto the Kenai Peninsula. 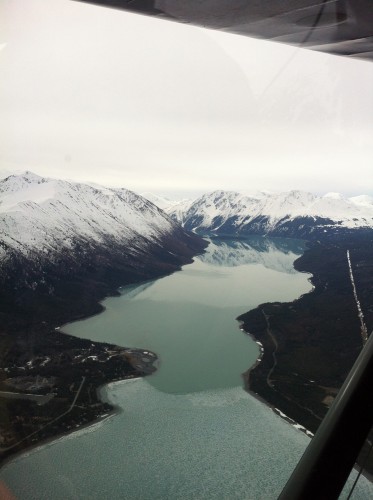 As we passed over Kenai Lake, I was in true awe of the vastness and extent of the snow-covered mountain ranges. Our next stop was the Soldotna Airport for a pit stop – refueling the plane and emptying our bladders. We then continued our flight westward toward the coast of the Kenai. From there I spotted the active stratovolcano Mount Redoubt (10,197 ft.) in the Aleutian Range. I made a note for future mountaineering endeavors in Alaska. 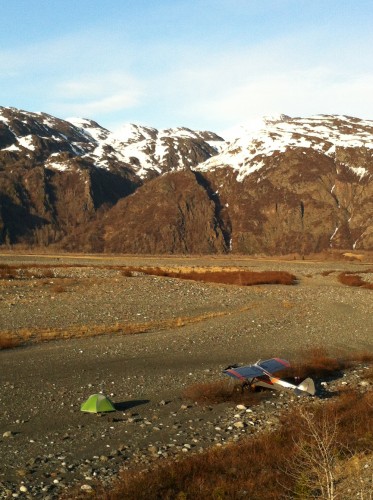 That night we slept next to the water in Anchor Point and watched the late sunset over Cook Inlet, Mount Iliamna, Mount Redoubt and all the other peaks in between. The following morning we continued flying down to Kachemak Bay and Homer Spit. Looking across at Neptune Bay, I asked Jake if we could leave the highway and return to the adventure and find some bush. It was then that I saw Jake’s bush pilot ways resurface. We were on our way to someplace off the beaten track, a place no trucks could access, only boats, planes or people willing to trek really, really far. 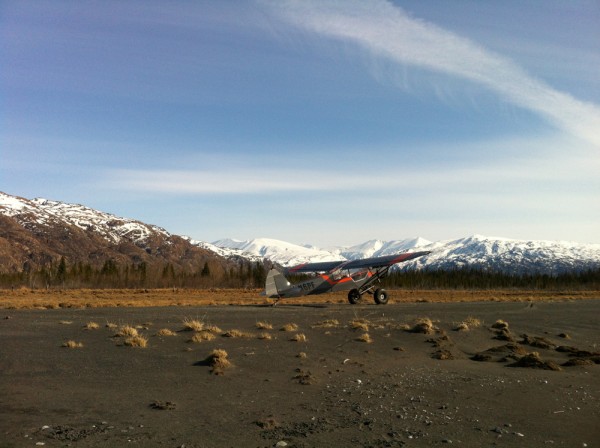 We flew northeast and arrived above the huge Tustumena Glacier. Jake eyed a landing zone on the small beach pebbles along the Tustumena Lake. After proper scoping he landed smoothly, the massive tundra tires under the Super Cub easily rolling over the rough surface. We quickly staked the tent and separated all of our food and posted it far away from camp – we were now in grizzly bear territory. City life vanished from my memory, I was now plane camping in the grand wilderness of AK.

We decided to save a hike up the Tustumena Glacier for the next day and headed toward a small river feeding into the lake with fly fishing rod in hand. When I cast the fly directly into the water Jake asked if I had ever fly fished before and I sheepishly admitted it was my first time. After a few lessons and seemingly endless casting, I wasn’t getting far with my new hobby. We decided to call it quits and hike around the lake to an old wooden cabin in the Sitka spruce trees.

The cabin had belonged to Hal Waugh, the famous bear hunter who received the first ever Alaskan master guide license. Waugh wrote several books with stories of Kodiak brown bears that weighed over 1500 lbs. As Jake continued to tell me legends of the area, I looked down on the beach and spotted tracks. Big ones. A grizzly bear had wandered up the beach not far from us. I then understood Waugh’s reasoning for often sleeping in boats. 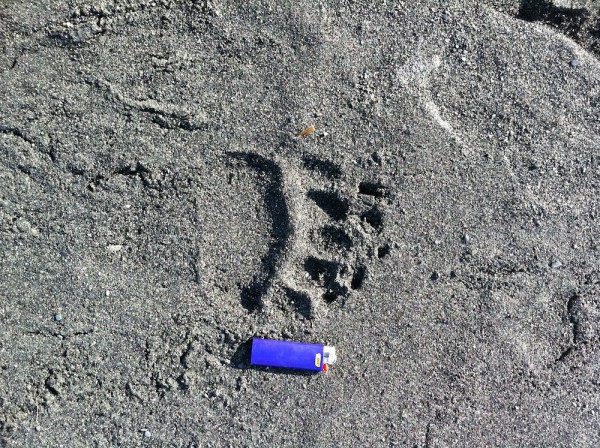 We strolled down the beach of Tustumena Lake. I was about to pull out my camera to capture the beauty of two swans swimming elegantly along the shore, instead I pulled out my notebook and tore two sheets – one for each of us.

Sitting there and folding the paper, we tried to remember what our fathers had taught us about making little boats. I was in no rush to continue flying to Seward in two days, to see the ferries and lots of people. Nor was I looking forward to returning to Anchorage – with more people and more streets –  before coming back to the Lower 48. Now all of that would only seem crowded.

Though our boats were different in design – one from the big city and one from the bush – we were confident in their construction. The little vessels floated off west into the setting sun, the cool wind from the glacier gently pushing them faster.

I smiled at all of it, even all the air I couldn’t see.

Skier and writer Holly Walker lives in Whistler when she is not traveling in search of perfect pow turns. Sponsors include Backcountry.com, Clif Bar, Eddie Bauer, K2, Dalbello, Smith Optics, and POW Gloves.