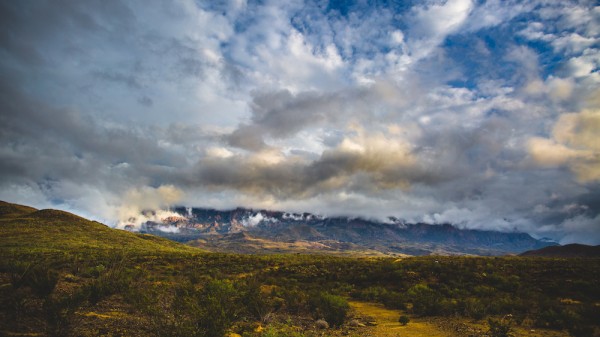 The forecast called for non-stop rain, 40+ mph winds, and occasional hail; so Paul Golangco, Ty Clark and I loaded up our vehicle and headed south down I-20. Our latest onLocation trip was taking us to the mountains and valleys of Big Bend National Park in South Texas where we planned to meet up with Daniel Davis, Kris Rutherford, and Jacob Combs who were leaving from Austin.

The onLOCATION Collective is our crew of adventurers, creators and storytellers. Together, we’re on a journey to beautiful destinations around the world with one simple purpose: to seek adventure as a means to inspirational and creative experiences.

At 12:45pm on this November day on our second trip of 14, we reached the North Gate of Big Bend at the Permission Gap and acquired wilderness permits, allowing us to legally camp in the park. We chose the valley between Croton Peak and Carter Peak as the best central location for our planned trips over the next few days. 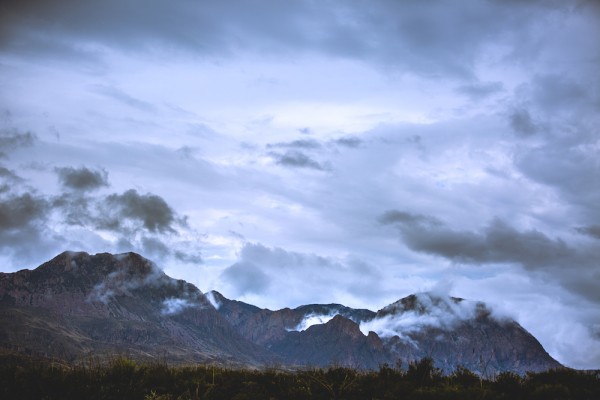 The weather in Big Bend when we arrived was everything less than ideal. Actually, it was shitty. High winds and torrential rains. Paul, Ty, and I quickly decided to find the best ground, and set up camp.

One of the many reasons I love MSR tents is that besides the space, functionality, and durability, I can set them up in about 90 seconds flat; so with the weather this day, I was extremely grateful. Unfortunately, while pitching the last tent in next-to-zero visibility, as I squatted down to hammer the last tent stake—BAM! A very offending cactus injected 100 needles or so right in my rear…

I’ll leave it to your imagination how I managed to get them out. (Ask Paul) 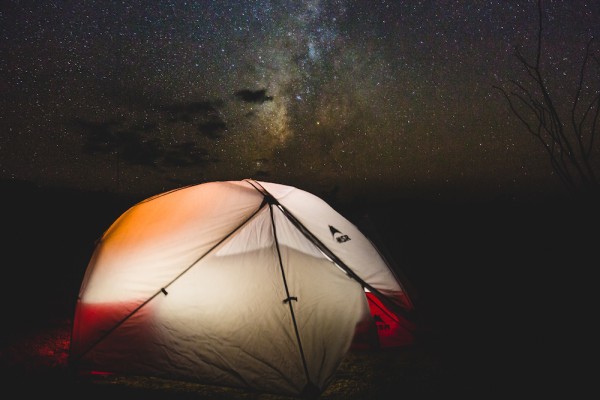 After the rest of the crew arrived and the weather broke, we geared up and headed north out of camp to the east ridge of Croton Peak.

One of the things I love most about the onLocation Collective is the opportunity to create visuals in insanely beautiful places with friends. For whatever reason the days we were at Big Bend, the weather was a perfect combination of crap and beauty. Ugly rain, followed by clouds that lit up the entire valley like someone hung a 6-mile softbox over it. Or fog that just managed to linger long enough to let sunlight sneak through the least dense parts. It wasn‘t clear; but it was perfect.

Back at camp just after sunset, it was time for dinner and a flask of whiskey.

We ate like kings—even bagged dinner tastes amazing when you’re camping—in the valley near Croton Spring right as the clouds seemed to disappear before our eyes. 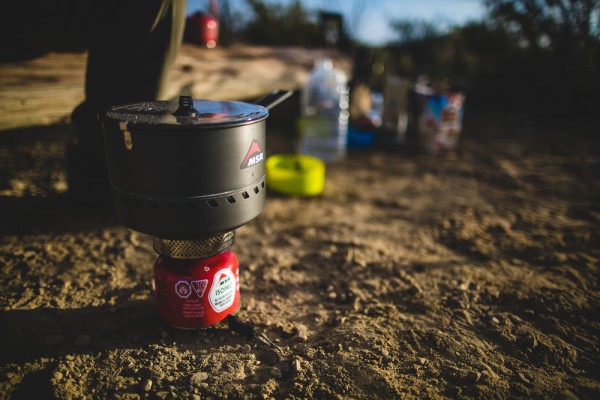 A little bit of storytelling, a little more Bulleit from my Stanley, some astrophotography, and a ton of laughing. Then it was off to bed for a 5:00am wakeup to trek Dog Canyon at the North East region of the park.

Wakeup today was at 5:00am, but the coyotes and wolves decided to have a karaoke session in the wee hours waking us even earlier.

Paul and I climbed out of our tents and started with priority #1; coffee. I NEED coffee. You could put me on a glacier or in a jungle with no food for a couple of days and I would be fine. But coffee—I NEED it. The Reactor makes the perfect Reactor french press.

Sunrise was about 6:55am today and we wanted to get to Dog Canyon for some gorgeous morning light, so we packed up, loaded up, and headed Northeast to Dog Canyon.

From the road, the entrance to the mile-long Dog Canyon is clearly visible about 2 miles east. It’s a distinct cleft in the Santiago Mountains. The shadeless hike across is not particularly interesting, and the surroundings do not change much until after 1.4 miles, where the path drops down into the wide, stony dry wash of Nine Point Draw that leads to the canyon after 1/2-mile more of hiking.

Because there were no distinguishable geographic features, I set my Garmin Fenix to track.

The limestone rocks that make up the canyon walls are a faded grey-brown, dusty and weathered, distorted in alignment, with some strata upturned by 90°. At the narrowest point the gorge is still 80 feet across, and in all places the pebble-lined river bed is bordered by sandbanks and clumps of vegetation.

Daniel Davis and I had planned to climb a few routes here this early morning but the limestone rock face left much to be desired. We did however scramble up some 5.6 – 5.7 faces and were rewarded with gorgeous views down the canyon. 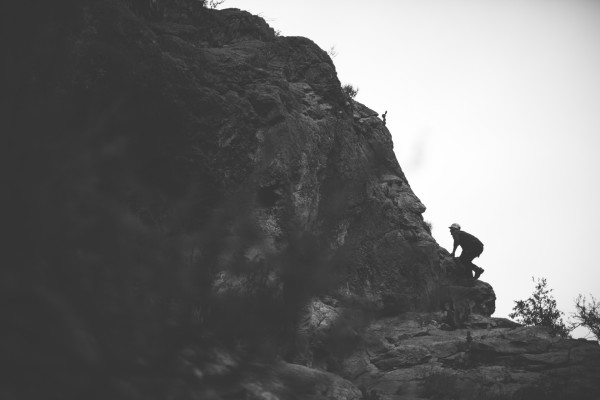 We stalked a few foxes and filmed for a bit before heading back West.

After lunch, we decided to head up to a small flat just below the summit near Ash Spring. Kris wanted to film the stunning views and Paul was itching to get the drone out. We loaded packs, filled up our MSR Dromedary Bags, and set out due south.

I hit the summit about 30 min before the group and was hit with gorgeous view. Looking west into the sunset, the lack of any air pollution produced the most gorgeous colors I had seen in the park so far.

Up here, we hung out a bit past sunset, enjoyed a little more Bulleit, and eventually headed the three miles back to camp. 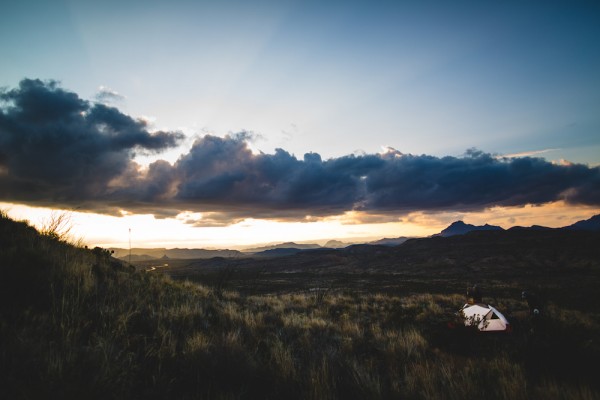 Tonight’s meal was Mountain House Chicken + Rice and dessert? The Milky Way. Big Bend is, in fact, one of only 12 Gold Tier International Dark Sky Parks in the world.

We all shuffled out of bed a little later this morning, took care of priority #1 (coffee), and spent our time hanging out, playing frisbee, and enjoying the dense fog that was occupying every inch of the valley. It was a pretty gorgeous morning.

Today we decided to head up into the Chisos Mountains and hit the Lost Mine Trail. Estimated at 4.7 miles round trip with a 1600 elevation gain.

Once again, we loaded up our packs and drove up into the mountains, this time via the North Rim. 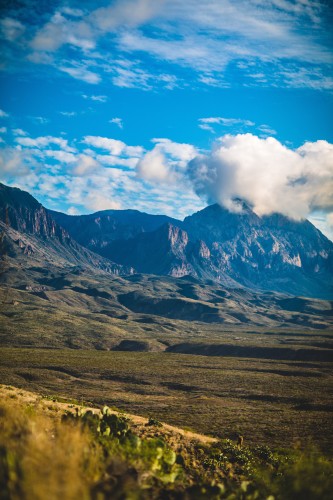 Maybe it was due to the forecast for the weekend, but the trail was vacant. This is one of the most popular routes in the Chisos, but it was just us and a couple of deer. 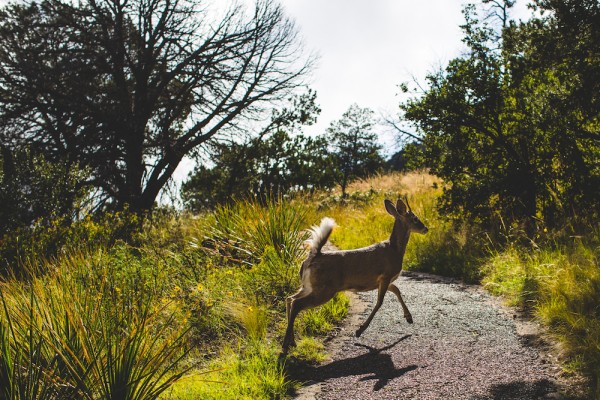 The trail starts out at a fairly easy grade, and progresses slowly throughout the switchbacks to a steeper pitch until you reach the lookout point. Once there, Kris and I headed east along the ridge line while Daniel and Jacob worked their way along a ridge in the valley. The views here are awe-inspiring. Where just a short while ago we were in this austere desert with nothing but few bushes and cacti, suddenly we were transported into a lush, verdant world of vegetation as if it were a scene out of Lord Of The Rings.

Kris, Paul, and I climbed towards Casa Grande Peak until we couldn‘t pass safely without climbing gear; Jacob and Daniel traversed the ridge back to the trail, and we headed back down the trail.

All in all, the hike took us about 4 hours.

Our plan for Nov 8 was to wake up earlier and hike Santa Elena Canyon on the Rio Grande border between the US and Mexico and then head up to Devils Den to do some climbing. Unfortunately, the forecast for Friday was extreme wind and heavy rain. This makes the hike throughout the plains to Santa Elena Canyon impassible due to river runoff, and obviously the climbing at Devils Den wouldn‘t be possible.

We decided as a group to breakdown camp, pack up, and head north back home.

I knew that this trip to Big Bend would be breathtaking, and it was, but not in the way I had imagined. Though Big Bend is a desert that is larger than the state of Rhode Island, it didn‘t feel so deserty (Except the time I got stabbed by a cactus in my rear). There was, indeed, this perfect harmony of mountains, vegetation, and rivers, and climate. Each one of us walked away from this trip wanting to return. I know if I went back tomorrow and spent 15 days,  I’d still be amazed by what I would encounter on each adventure. 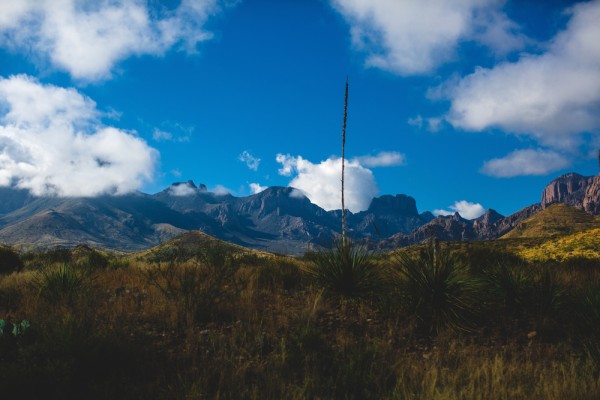 Steve Rokks is a freelance travel and outdoor photographer, originally from New York, currently based in Dallas, Texas. Steve works on assignment for editorial and commercial clients and has photographed in over 20 countries around the world.