On May 6th, my expedition partner Ryan Waters and I reached the geographic North Pole after 53 grueling days. To reach the North Pole from land is a journey of 480 miles in a straight line, but the route is anything but direct. With sea ice moving and shifting due to winds, tides and ocean currents, the surface is constantly in flux. Huge pans of ice collide and crack in a screeching chug, chug, chug sound. There is an overall drift to the ice, too. The entire mass moves slowly from the pole toward Canada, the U.S. and Greenland. In fact, waking up each morning, we were usually quite distraught after checking our GPS—losing up to 3 miles of forward progress while we slept.

In 1995, Reinhold Messner, easily the most accomplished mountaineer of all time, called his unsuccessful attempt to reach the North Pole, the horizontal Everest. While over 6,000 people have summited Everest, only 250 people have traversed the Arctic Ocean from land to the geographic North Pole—less than 50 of those traveling unaided and un-resupplied, meaning pulling all your food and supplies from the start without the assistance of sled dogs, kites or any mechanical device.

To be successful requires careful planning and preparation, persistence and the right gear. It is not with the least bit of overstatement that I say reaching the pole was in large part due to our MSR gear. 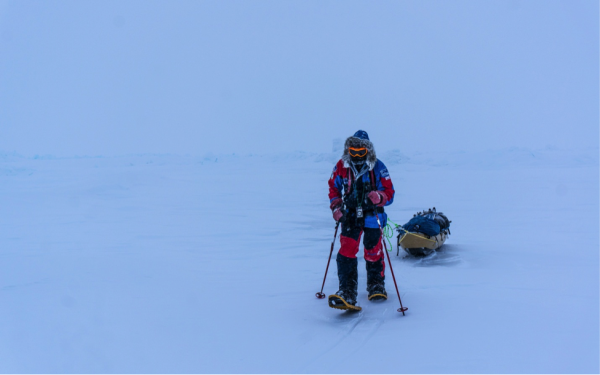 Lightning Ascent Snowshoes
We could not have reached the pole without these snowshoes. With our sleds weighing nearly 320 pounds at the start, the only way we could get enough traction over the rough terrain was by using the Lightning Ascents. Despite taking the brunt of all our effort—bashing into ice chunks constantly—they looked nearly new at the end of our journey.

XGK EX Stove
This is easily the best stove on the entire planet. With much of our gear we took spares, but the XGK is so reliable (and field repairable) that we only carried the two we used each day (versus packing a third). The heat output is unparalleled and we never had a clogged jet—not bad considering we used them for an average of 5 hours a day for 53 days straight. 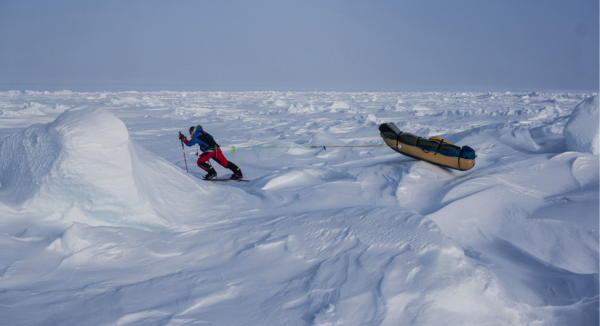 Flight 2 Poles (custom)
There were several times every day where I feel like my custom MSR Flight 2 poles actually saved my life—no joke! OK, maybe I wouldn’t have died, but stumbling or falling, I could have easily sustained a bad injury had it not been for a well-timed pole plant. Lesser poles would have crumpled or bent under my weight. Additionally, the poles provided traction while snowshoeing, balance points during white outs, a means of communicating over great distances (two poles held out horizontally means ‘all ok’) and testing thin ice. Carbon fiber poles would have snapped in half in the cold and under the strain.

MSR Dual-handle 5.3 L hard-anodized aluminum pot with custom Heat Exchanger
I love this pot for so many reasons but the one of my favorite features is the locking lid. It allows us to store stoves, pumps and cups inside the pot while we’re traveling which protects them from breaking in our sleds.