I’ve known my expedition partner Ryan Waters for six years now and I can honestly say that he is luckiest unlucky person I know. It seems like every year I get a call from Ryan from some remote corner of the globe about one “close call” or another. An avalanche on Manaslu, being on a hijacked plane in Russia, the list goes on and on. Actually, that’s not totally true. Usually, I hear about some crazy situation on the news, then later find out that Ryan was somehow involved. His pragmatic demeanor rarely allows for hyperbole. 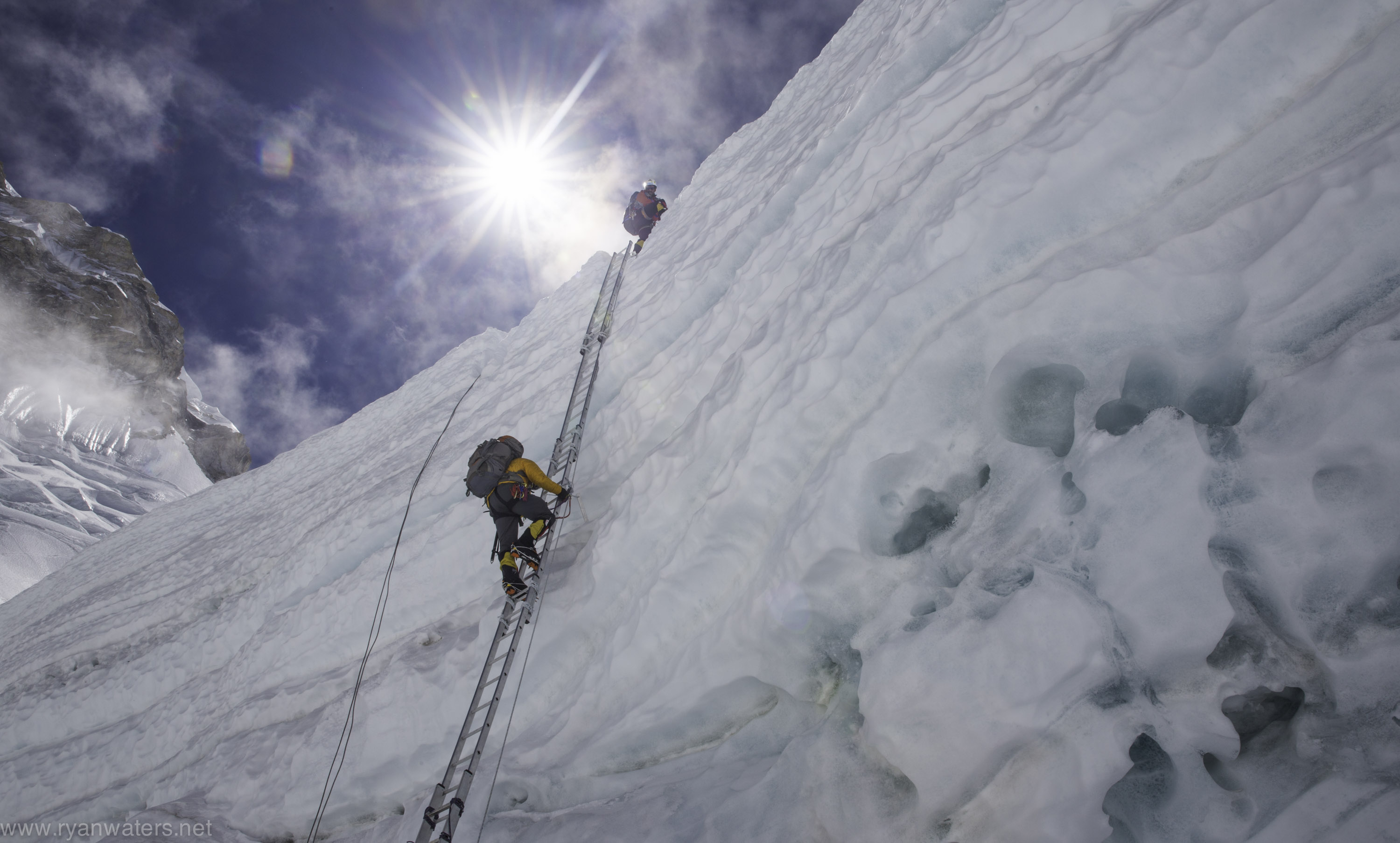 In one sense, these near-death encounters are just a part of Ryan’s life. As the director of Mountain Professionals, he has led sixteen 8000 meter peak expeditions, including four expeditions to Mt. Everest, reaching the summit of both the Tibet and Nepal sides of the mountain. Still, when I woke up to check the news of the terrible earthquake in Nepal and avalanche that had struck Everest Base Camp on April 25th, I was more than a little worried. Thankfully, Ryan called me an hour later on his satellite phone to let me know that he was OK. In normal Ryan fashion, he was brief, thoughtful and to the point.

The catastrophic avalanche that led up to the call and the events that followed are hard to fathom for most of us. Several weeks later, I asked Ryan to share his experiences and thoughts.

EL: How many times have you climbed Mt. Everest?

RW: This was my fourth time leading an expedition to Everest. I have summited twice, once from Tibet and once from Nepal. This time the outcome was determined by nature…

RW: Our philosophy is to arrive in good style wherever we are climbing. So we take a slow approach trek to basecamp and even to the higher camps. We stress to our team to practice hard skills at basecamp, such as clipping past transitions. This is so that we look like a proper climbing team, stay together, take care of each other, and arrive feeling good as well! I like to get acclimated early and then wait for the best weather—which is definitely not the first weather window on Everest because this is when everyone rushes to try and summit and quite frankly this is when the most accidents happen.

EL: Did you notice any difference in the attitude of climbers/sherpas in Basecamp and/or on the mountain due to the previous years of “bad luck?”

RW: No, not really, at least for my team and certainly our Sherpas were very eager to just climb the mountain as if it was a normal year, which it was until the earthquake. After this accident I did see a marked change in the mindset of some guides and companies who are starting to wonder if things are worth it. Like clients and Sherpas, guide services have a lot of skin in the game, reputations, safety of team members, huge financial obligations, and equipment that gets smashed and broken. 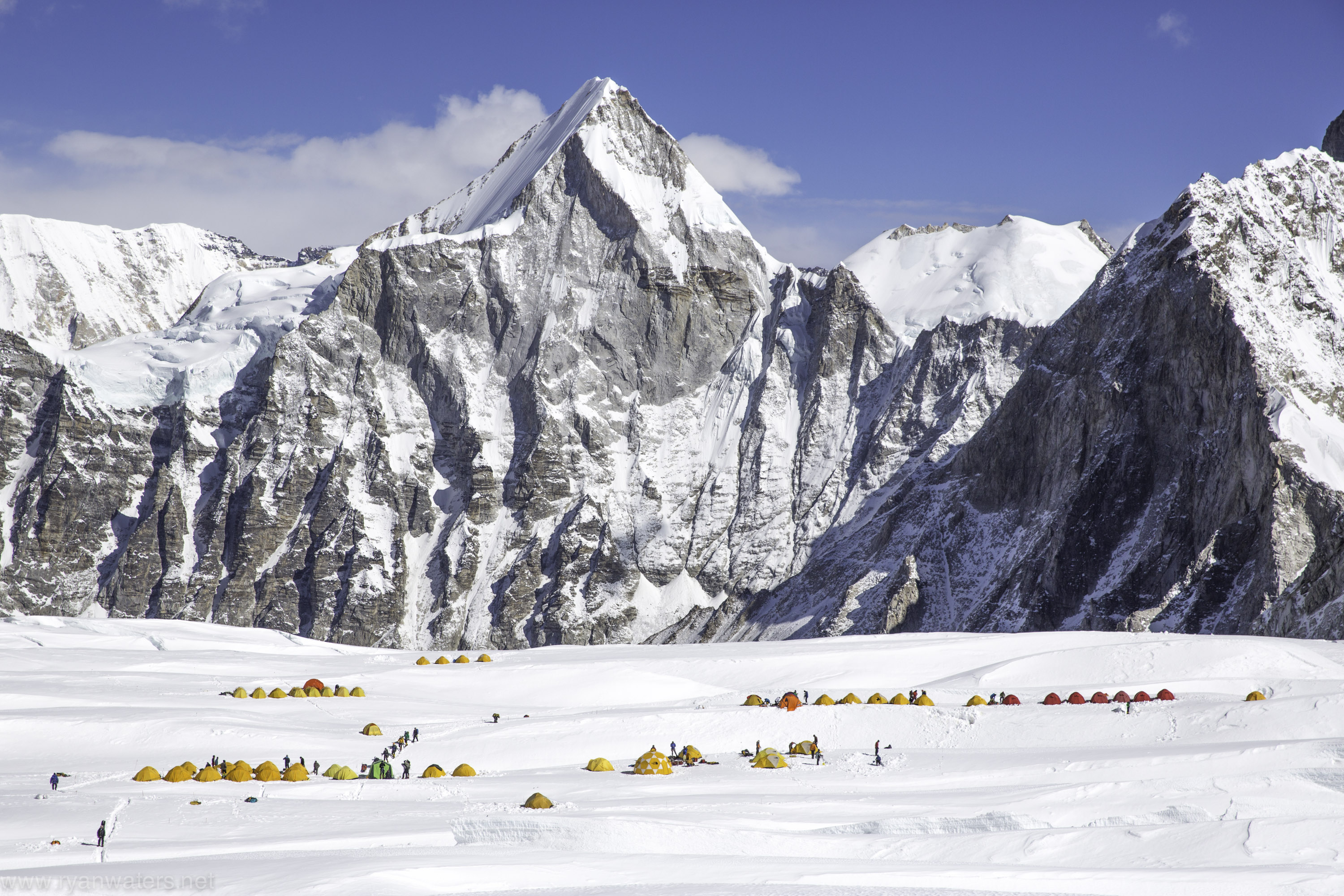 EL: How was your team’s climb going prior to the earthquake?

RW: Very well. We had just returned to basecamp from a trip up to Camp One, and were feeling excited to get one of our two acclimatization rotations completed. Our Sherpas were going back up to finish stocking Camp 2 and we had all our tents up in C2. Most importantly our team members were feeling strong and healthy. 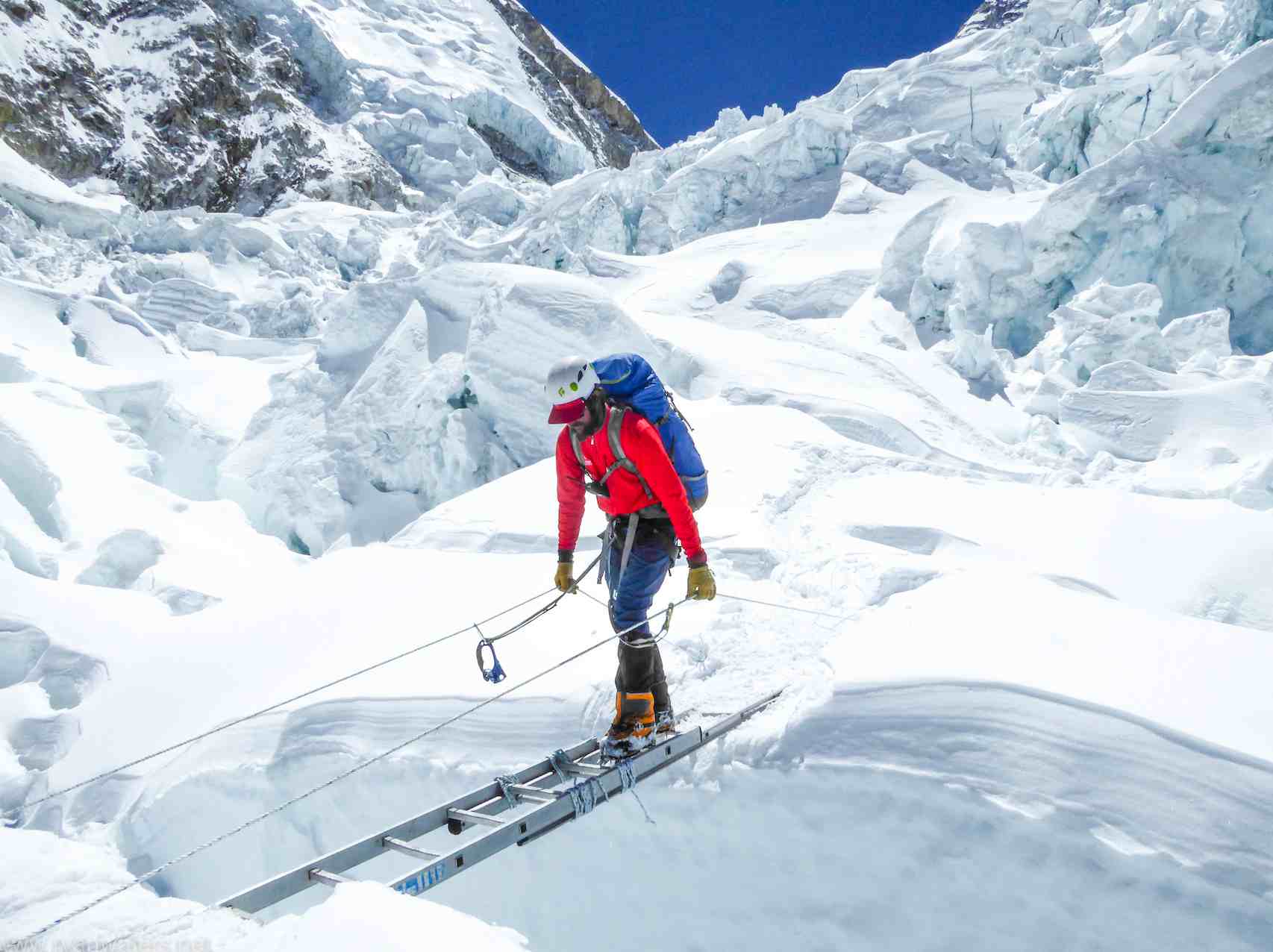 EL: Where were you when the earthquake/avalanche occurred? Can you describe what happened?

RW: Just as we were entering our dining dome at lunch time, we felt a very large rumble under foot. Right away we looked at each other and said “earthquake!” We ran to the center of our camp. That is when the massive avalanche came off of Pumori’s east side and exploded at the valley floor. We had just enough time to run over to our gear tent and huddle inside awaiting whatever air blast was heading our way. I told the group, “It’s just going to be air and snow so get low and hold on. It will be ok.”

EL: What was your first reaction? Second?

RW: A few minutes later, we started to hear from shouts and word of mouth that basecamp was in terrible trouble. As a team, we decided we were fine. I ran to my tent to put on mountain clothing and boots so that I could move better on the snow and rock. I grabbed our two first aid kits and headed down to basecamp. Just below our neighboring camp I started to see the chaos. There were injured people all around. Some walking around in shock; some sitting wrapped in broken tents; and some less fortunate.

EL: Describe the scene after the avalanche and the role you played in triage.

RW: I spent the rest of the day alongside many very dedicated volunteers treating one patient after another. The first person I helped was an older Sherpa, probably cook staff for an expedition. I could see into a very deep gash in the top of his head. He was wrapped in a broken tent, cold and wet and with one shoe on. Another climber and I did the best we could to stabilize his injuries, which included a broken arm, and arrange for a makeshift stretcher. I stood up, pulled off my latex gloves and the next person in need was wrapped in another broken tent 10 feet away, and so it went. I reset a compound arm fracture, helped a guy with two broken legs, and most remarkably assisted a climbing Sherpa who had been “blacklisted,” meaning he was expected to die. Another guy had serious internal injuries. Turned on his side, he had fluids of all kinds coming out of his mouth. Thankfully Willie Benegas put an airway in his mouth while he languished in the dead bodies tent. This guy was a goner, but people rallied—we yelled, “Come on, this guy is one of your brothers! Don’t give up.” And a band of Sherpas carried him 40 minutes down to the doctors. He made it through the night and was evacuated by heli the next day… Incredible.

RW: A mixture of very mellow, sad emotions, and confusion of what to do next. By this time our team had pretty much agreed we were finished for the year. However, because we heard that the lower villages and Kathmandu were in dire straits, we decided to stay up in basecamp and out of the way for a few days. Then we packed up and slowly trekked out.

EL: What was the experience like for the people trapped at Camp 1 and Camp 2.

RW: From talking to many of them it seems that sitting in a white out hearing big avalanches come down on both sides of you would be very stressful. You would just have to sit there and hope for the best because there is no place to go.

EL: Describe hiking back down to Lukla. How was the trail? The villages?

RW: Thankfully, a lot of the Khumbu valley villages were not too bad. There was the occasional wall of rocks or house that had fallen, the Thenboche monastery was pretty badly damaged. It was very surreal to be trekking in the first week of May in the Khumbu and see no people. It must have been what a trek through there was like 30 years ago. The locales seemed to be going on with business as usual.

RW: Over the years, the stories and experiences add up and blur into one another. I’ve had my share of dangerous situations, some from K2, a huge avalanche on Gasherbrm II where we were involved in a big rescue of climbers. I was on a hijacked airplane in Russia once; we’ve been stalked by two polar bears on the Arctic Ocean. The list goes on.

EL: Many people want to help. Can you recommend any charities?

RW: I would recommend the dZi Foundation. This is a long-standing nonprofit that helps underserved areas of Nepal in all aspects of health and education initiatives. 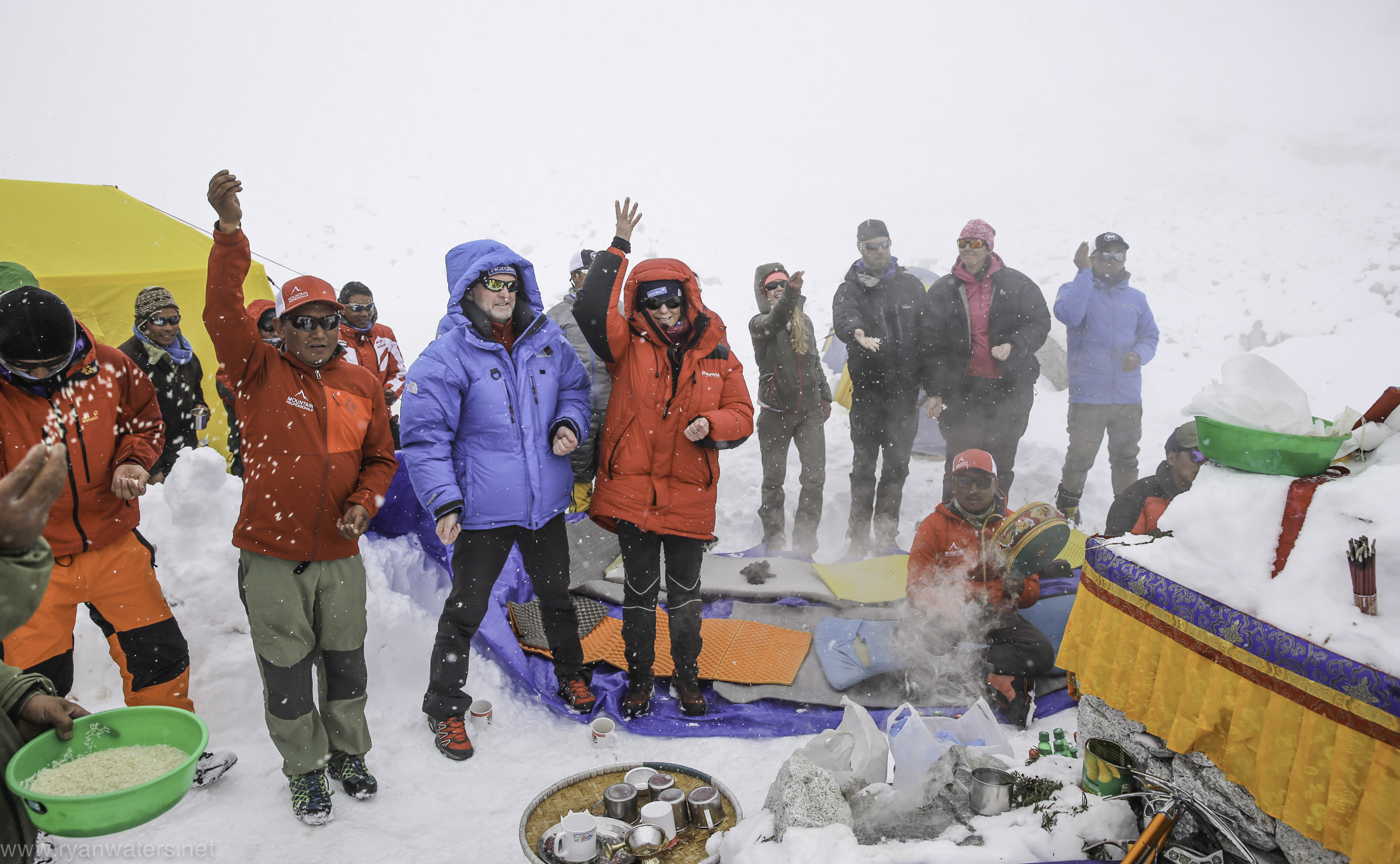