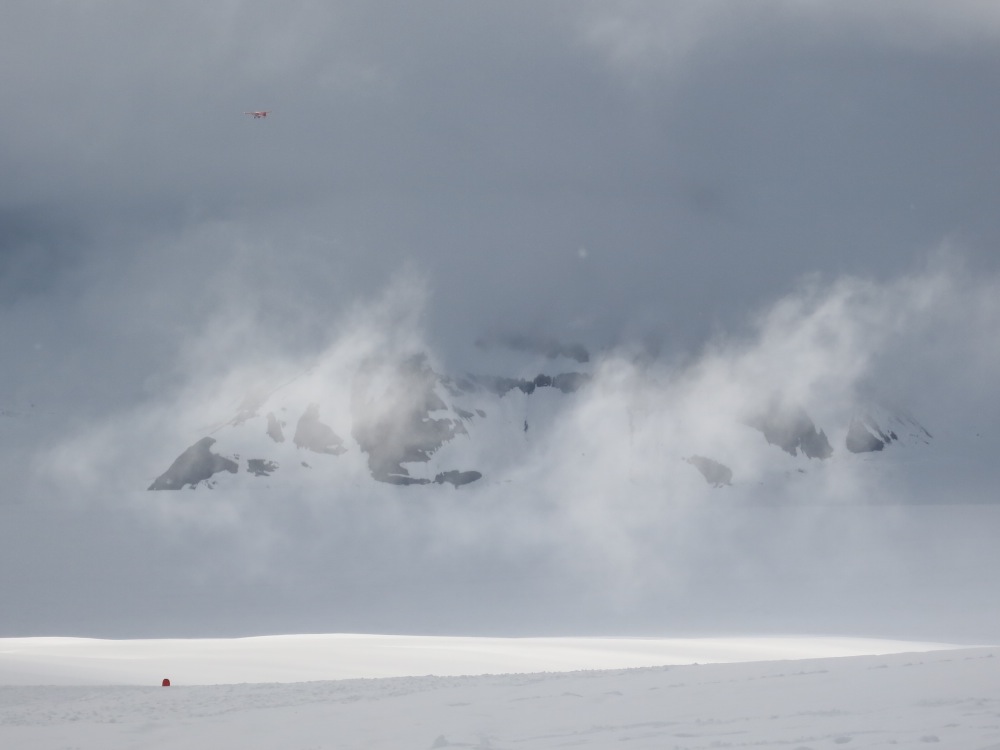 Daylight greeted us as we awoke, brewed up, ate, and started moving once more.  Stanislav took the aid lead on the Nose pitch.  As I belayed his lead up the tiny overhanging crack threading up the wall I recalled our days practicing our aid climbing in Leavenworth in a slight drizzle.  We were ready for this.  So far our training had paid off. 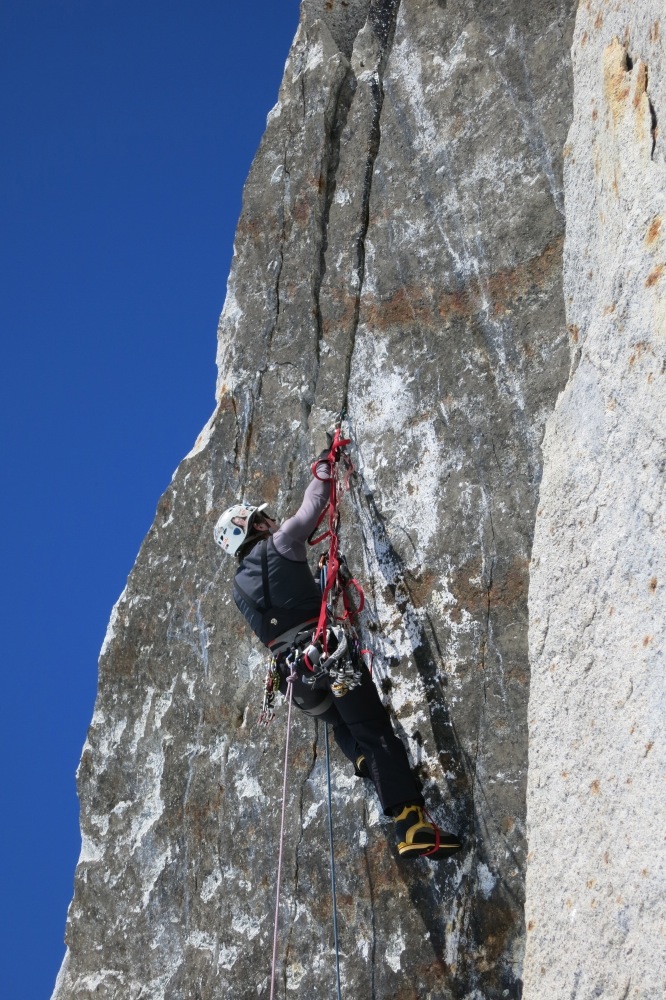 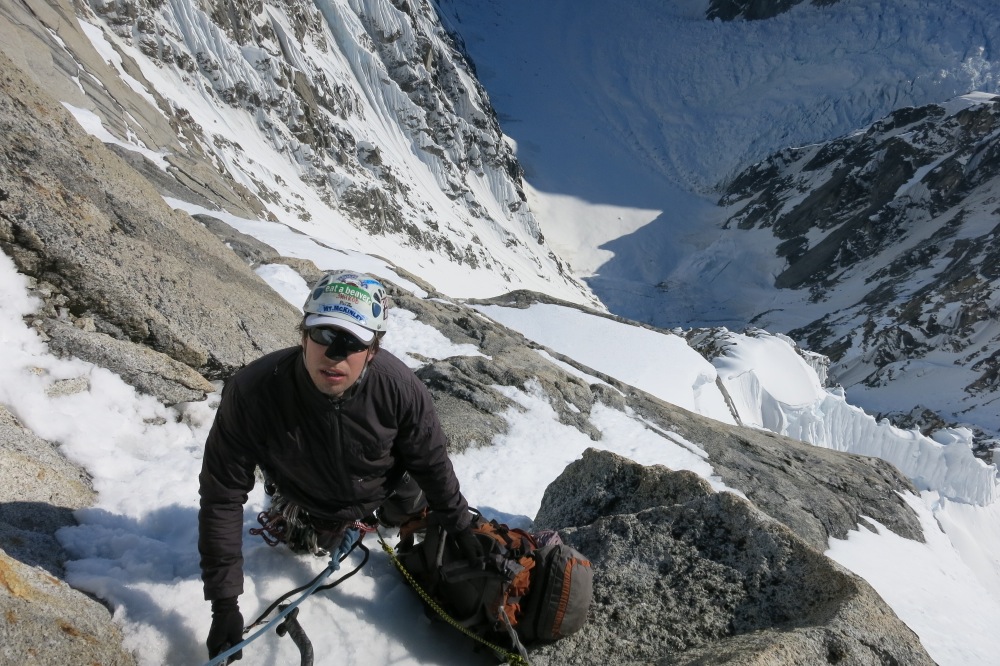 The belay station for this pitch was crowded, difficult, and had stunning exposure.  Below us the Tokositna glacier flowed past Hunter, which towered above us across an open expanse of air.  The next section was a spicy run-out mixed traverse that I dispatched with the knowledge that our mixed difficulties would soon be over.  Indeed, we were happy to return to neve and ice.  We joined the West Face Couloir route at this point and climbed to the top of it and over onto a traverse into a cave.  A sea of solid golden granite soared above, riddled with splitter cracks.  Were this mountain not in the heart of the Alaska Range it would have hundreds of routes on it.  We climbed up into the cave.  The snow floor was the flattest place we had seen since the ledge below the Nose.  We brewed up, took off our packs, and dozed for an hour before continuing. 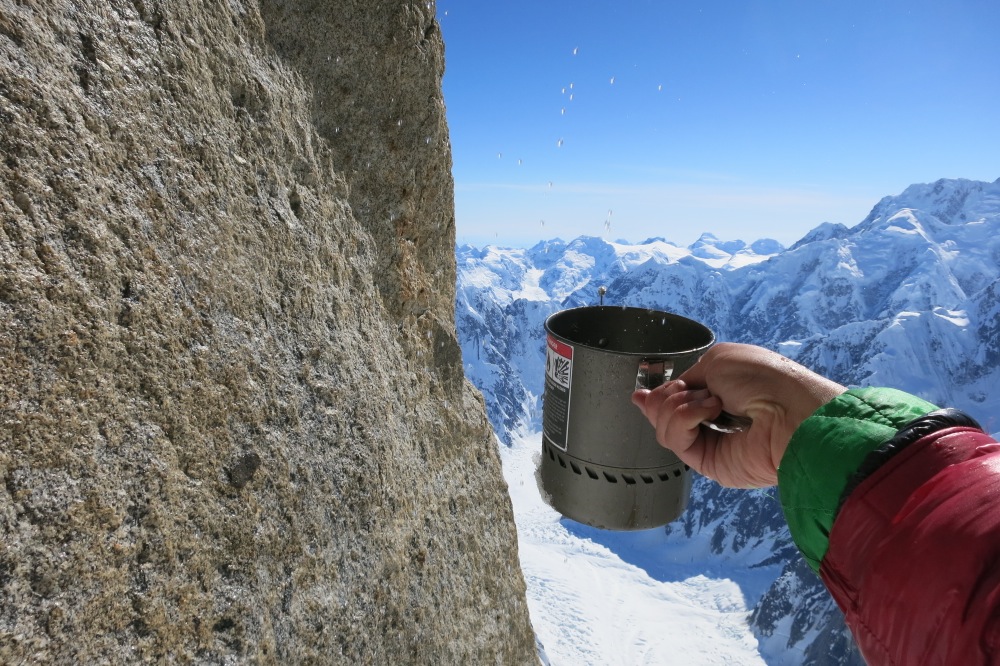 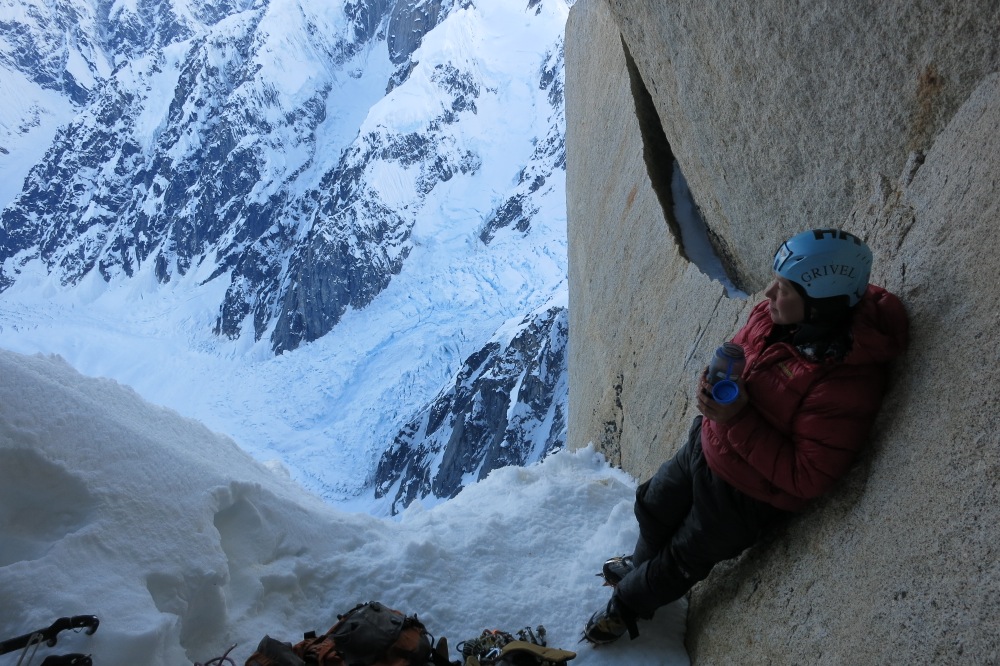 The thing that makes an Alaska Grade 6 route Grade 6, we decided later, was that it just keeps going.  We found out why the Harvard Route had earned this grade as Stanislav led out over the mixed entrance to the upper icefields.  When I got to his belay stance I sensed his fatigue, grabbed the handful of screws from him, and continued the lead out over incessant 50 degree slopes.  Swing after kick after swing after kick after swing led us higher and into new realms of exhaustion.  We had been going for over 40 hours.  Tired muscles were a laughable inconvenience.  Our raunchy sense of humor had gone out the window hours ago.  It was replaced by a care for each other and tolerance of each other’s eccentricities when very tired that I have only experienced between seasoned alpine partners.  We had seen each other stripped bare before.  We knew when to step up, step in for the other.  Stanislav told me when to eat when my blood sugar tanked.  I grabbed the rack when his energy waned.  So it was when we arrived at the gateway to the summit: an overhanging snow cornice. 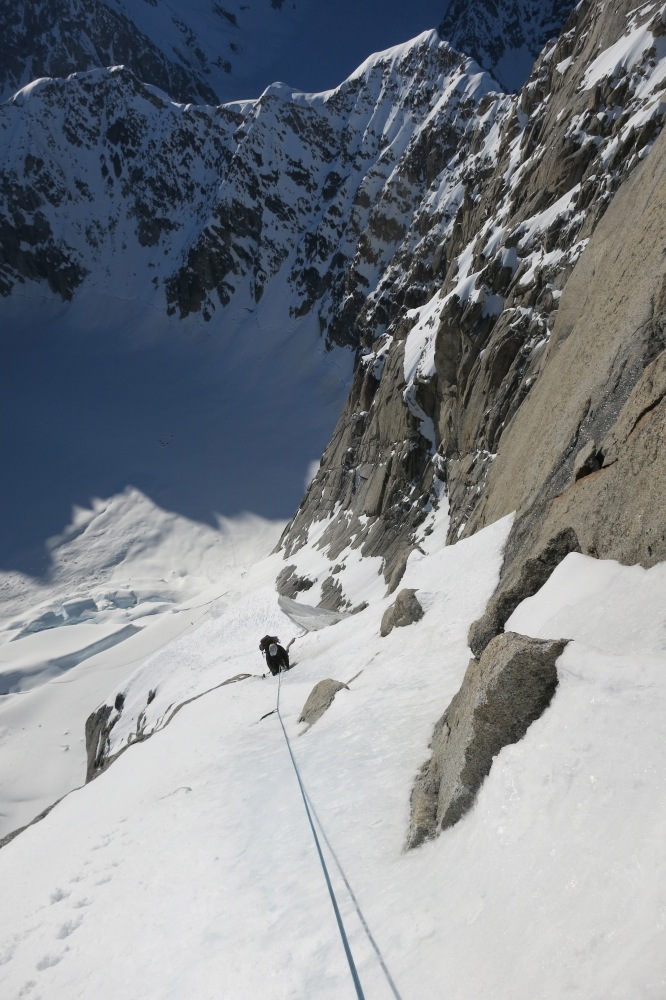 “Do you want to lead this, Stanislav?” Oh please say you do.

Grumble. You wouldn’t say it if you didn’t mean it.  Time to rally.

I set a screw in the last of the ice before the overhanging snow, stared at it for a while, whined like a baby kitten, then with a feral war cry sunk my mixed picks as far as they could go into the bottomless sugar and swam, groveled, and swore my way up to the relative safety of low-angle snow.  I flopped over like a fish and kept on going.  The sun was bright in the sky.  I belayed him up on a hip belay seated one rollover below the summit. 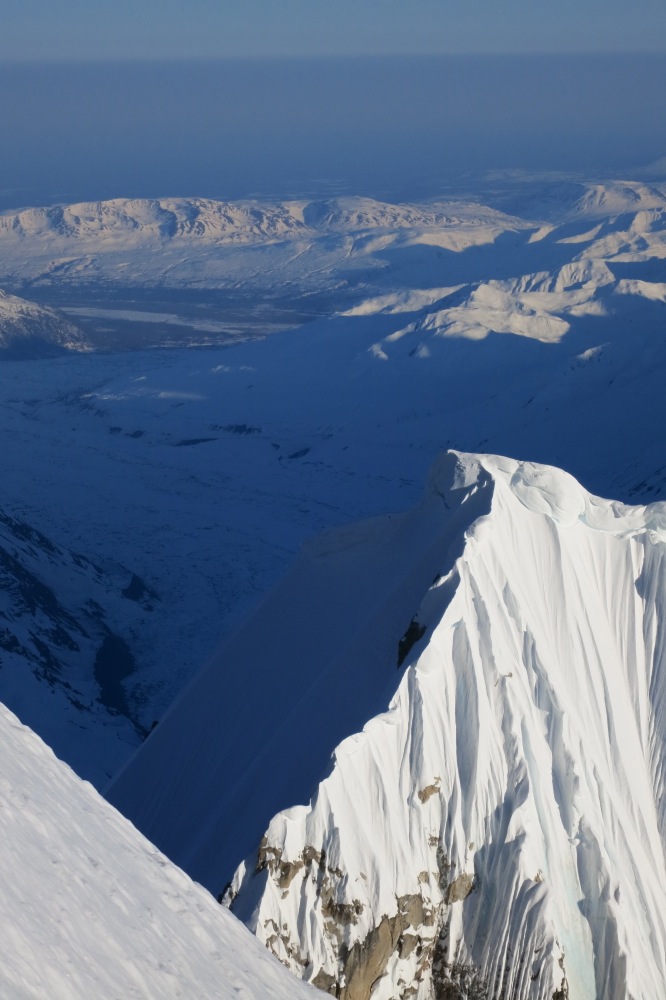 We summited together while each in our own unguarded moment of emotional release.  A dream realized.  All our work, all our planning and training, our rambling phone conversations while commuting to work, all the road trips, the ice climbs, the desert towers – we needed to live all of it to stand atop Huntington as a solid team of two individually strong climbers.  We were surrounded by a sea of peaks.  The golden granite slopes of Denali soared in the distance, marking how far we had come since our first climb together.

In Jack Kerouac’s Dharma Bums, Japhy Ryder tells the protagonist that when you ‘reach the top of a mountain, keep climbing’.  This applied on Huntington.  We still had to get down the sketchy overhanging cornice and many, many snowfields.  One scary unconsolidated downclimb, several v-threads, armloads of tat, one found ice screw, one exhausting sunny traverse and many, many v-threads later found us at the base of the West Face Couloir, getting drenched.

A rapid warmup had turned the route into a running stream.  We rapped fast but in control, wanting to get out of the way of the ice pellet avalanches the heat was releasing from the upper mountain and away from the path of potential rockfall.  We had climbed the route just in time.  As I slid down our icy ropes to the slings of the last rap station I found the multicolored webbing was now in a running stream.  With incredulous resignation to our situation I clipped in.  Water ran down the sling to my harness, down my leg, and into my boot.  I gave a thwarted laugh that came out like a little cry.  I was so tired.  I croaked out a hoarse ‘off rappel’ and stared ahead into another Alaskan twilight.  We hadn’t used watches for the climb – as I told Stanislav at the airport in Talkeetna, we were on the mountain’s time – so I did not know the hour.  I had been seeing faces in rock – something that only happens when I am deeply exhausted – since the cave.

As I had on the summit snowfields, Stanislav had a burst of energy.  He took the lead making a path down the vast snowfield, mechanically kicking and swinging as I followed his bootpack.  Less than 2 hours later we were staggering on the flat trail back to camp.  We were vibrating with exhaustion and adrenaline.  We drank the four Sockeye Red beers we had brought and power-ate a party size bag of Lay’s potato chips.  We crashed out and awoke to some whiskey generously offered by the small party that had formed in the Posh House next to our camp among a guided party and some personal climbers from Jackson. 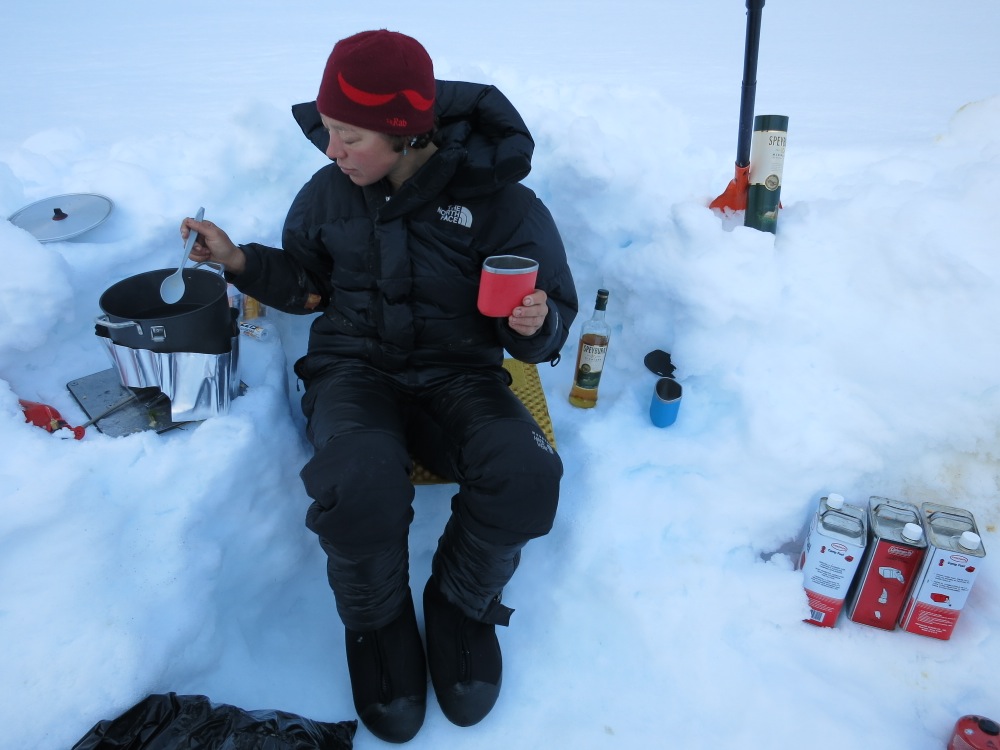 For the next eight days we climbed…nothing.  The Great Alaskan Warmup  – my name for the warming trend each year during which all the snow gets isothermic and useless for walking – had begun during the last raps of our climb.  We started walking down glacier for some objectives on the other side of the Tokositna, but the crevasse bridges were too spooky with the punchy snow.  We got a flight bump over to Base Camp and tried both the West Ridge of Hunter and Southwest Ridge of Francis, only to find bottomless sugar on both routes.  We ended up eating all our bacon and junk food and drinking all our single malt far too soon.  We camped above but in sight of the runway, sitting on folding chairs with footrests lording over the masses of people waiting to fly out from Denali’s West Buttress.  People Magazine and other reading material generously lent by Basecamp Lisa, our highly refined and extremely mature sense of humor, and the company of some good-natured ice core scientists from Dartmouth got us through this too-warm week in good spirits.  We had sent our objective.  And there was always next year.