The voice over the phone was nervous.  I was barreling down I-94 somewhere outside Miles City, Montana, going about 90 on my way to the Bakken oil patch and already tired.  I was telling my climbing partner Stanislav, who had just completed a bone dry ascent of New York Gully on Chair Peak, about the hip-deep powder my friend Tess and I had found on Teton Pass.

“I’m worried you are doing too much skiing and not enough ice climbing.  I don’t know if you will be adequately prepared for Huntington.”

This worry voiced made me the kind of mad that promotes a flurry of training.  Up at work in the oilfields I ramped up my workouts.  I camped for days at a time in the back of my truck in Hyalite, throwing myself at leads on mixed routes.  I worked through the fear and climbed into the long days of spring until all the ice fell down and I was ready to leave for Alaska. 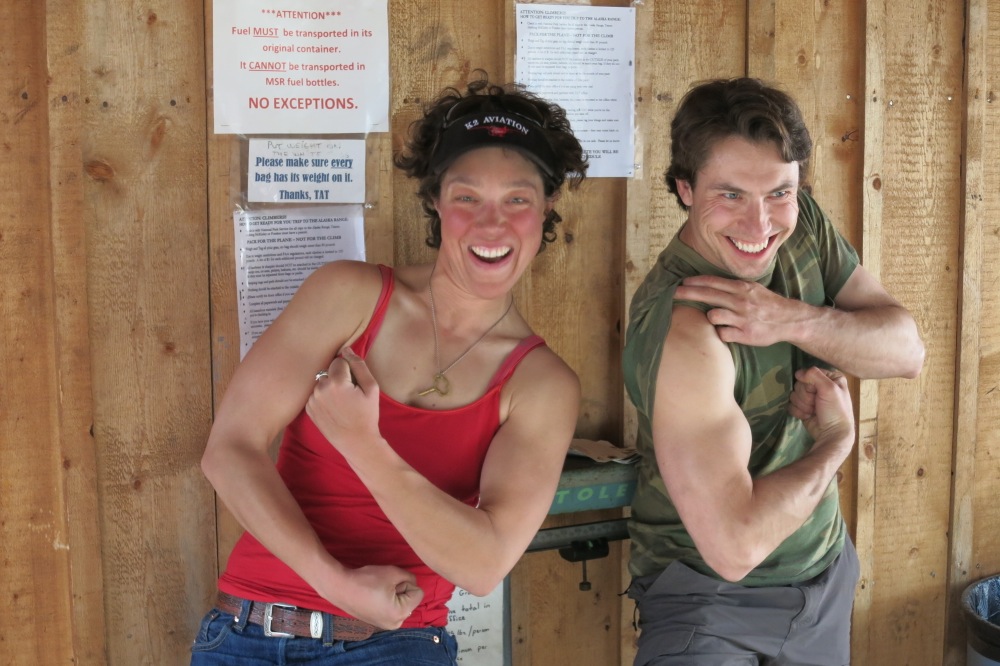 Stanislav greeted me at his apartment in Seattle, and we proceeded to buy beers to drink while doing our final packing for Huntington.   We were as strong as we were going to get.  We didn’t know if our training and preparation would be enough.  He had climbed the Cassin and I the Southwest Ridge of Francis and guided several Denali trips, but this was the biggest undertaking either of us had tried.  Gear spilled out over the floor.  Five screws with screamers, a set of nuts, a single rack of cams to 3 with doubles from .5-2, a 9.8 60 meter lead rope, for the aid pitch, an 8.1 tag line/spare rope, a BD Firstlight, an MSR Reactor, spare pick each, light puffies, extra gloves, sleeping bags.  We had lists of lists. 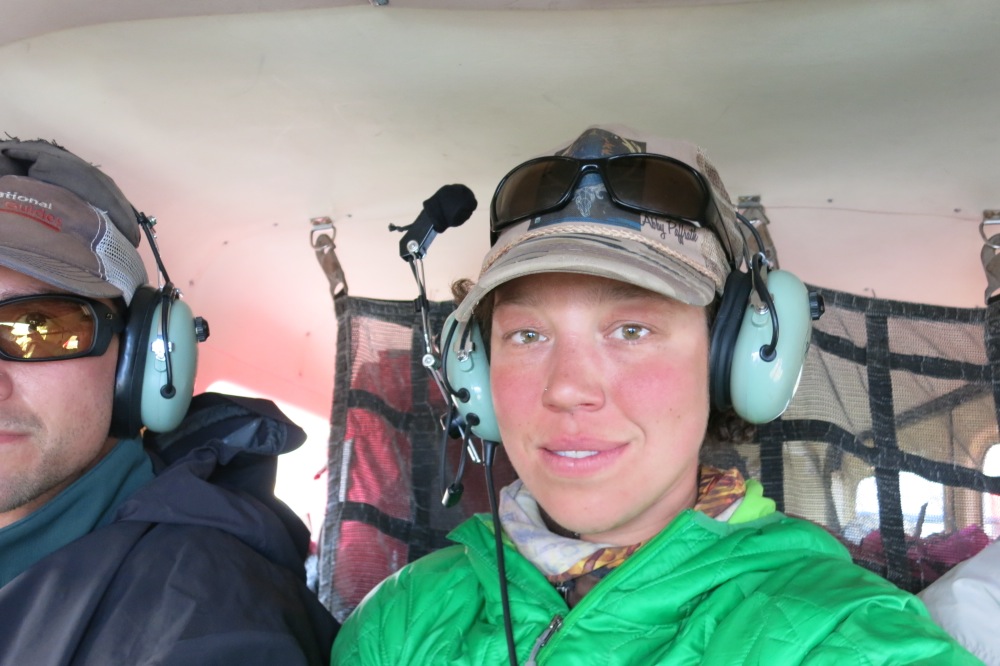 We left the green world of Talkeetna springtime and donned our headsets in the DeHavilland Otter.  After a spectacular view of our objective and a smooth landing on the Tokositna we moved into someone’s camp platform, set up our tent, and slept all night.  We got a start at the crack of noon the second day on the glacier.  The bergschrund was our first obstacle, but a guided party climbing the West Face Couloir had wanded a clear path over the broken moat of ice.  We had to sidestep a significant distance to reach the base of the Access Couloir.  Firm neve perfect for crampons and hero sticks with our ice tools greeted us, and we simul-climbed quickly up this section.  In the lead I placed a grand total of 5 ice screws. 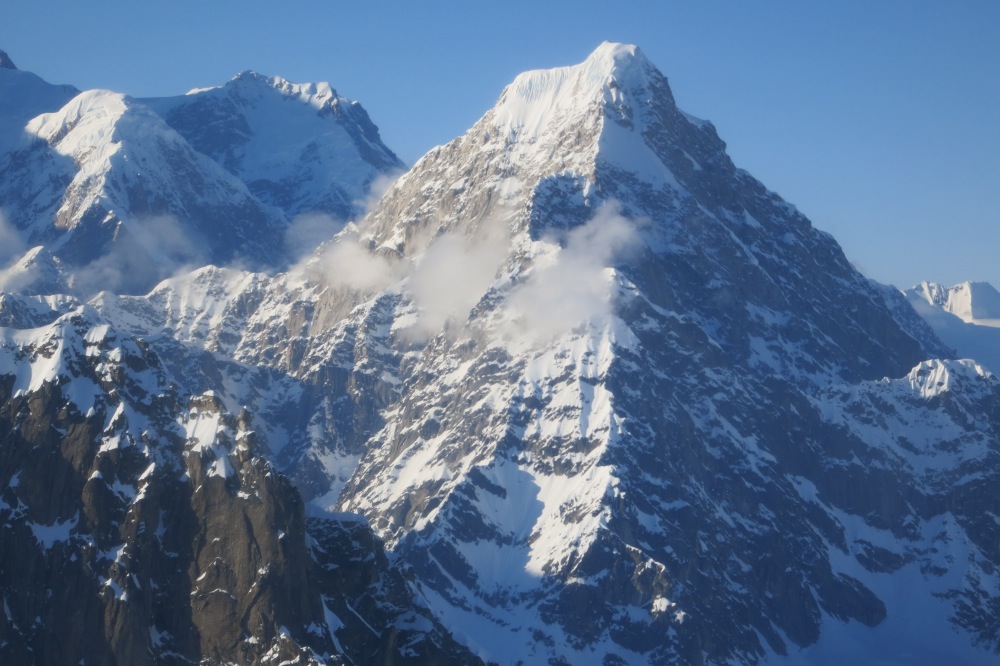 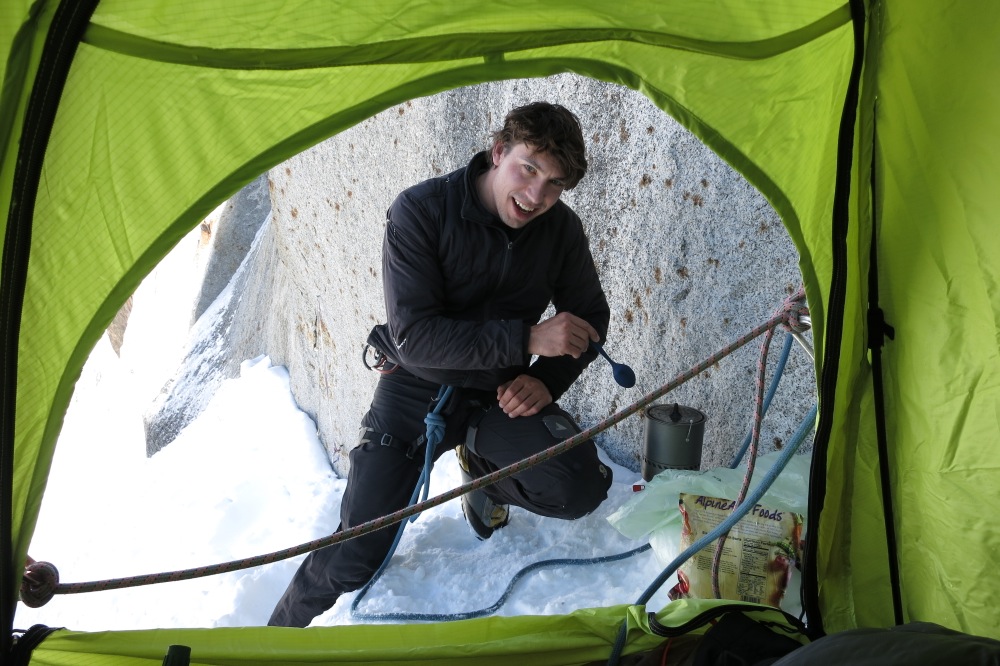 From the Access Couloir we gained the ridge.  Stanislav led up a mixed bit and onto some snowfields.  We stopped to brew up at a little platform kicked out at the base of a sheltering rock before the crux pitches began.  The weather was still quite good and warm in the sun as we kicked our way up to the Spiral.  I racked the rock gear with great glee.  “Stanislav.  My dream came true.  I was afraid to say it in case I jinxed myself, but I’m gonna do this with bare hands.” 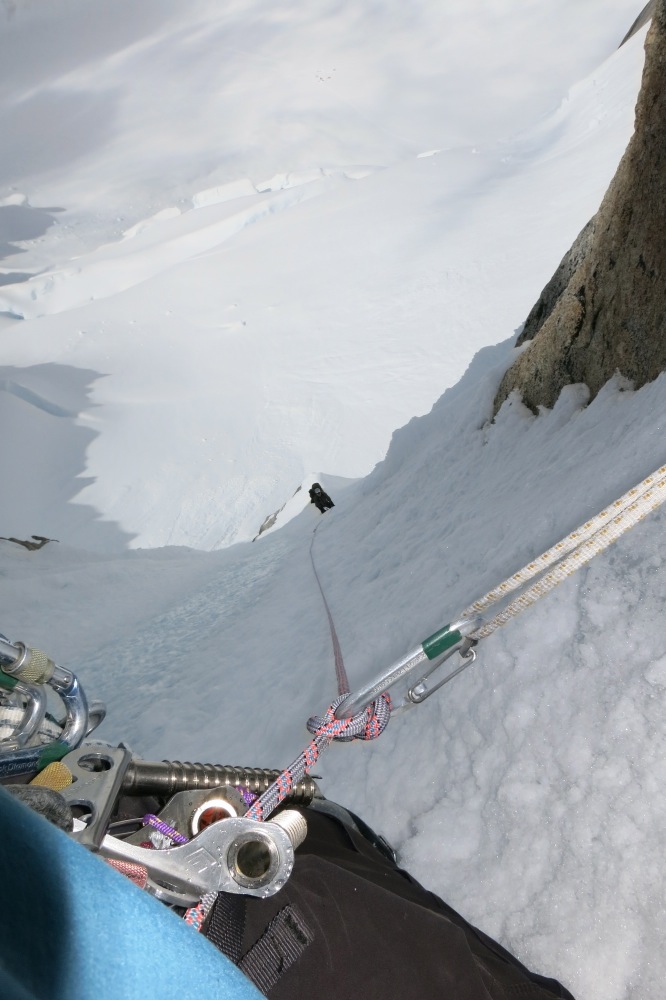 The Spiral was everything I expected: legit 5.9 in crampons.  The movements were protectable, pumpy, and fun, and the rock was indeed kitty litter at the top of the pitch.  I hauled the packs and then brought Stani up.  I re-racked and set out on the mixed/supposed C2 pitch above.  I climbed through the ice and rock moves and reached a slightly overhanging crack with three big orange pins hammered into it.  I studied it for a moment, clipped a pin, and yarded up on it until I could get a good hook over the edge.  Hauling the packs proved strenuous.  We moved over some easier mixed ground.  Stanislav took the next steep mixed pitch, an M5 chimney with a continuous runnel of ice in the back.   I watched him disappear into the chimney from my protected belay spot.  I heard him as he worked through the difficulties, but did not see him until he emerged on a ledge far above me.  He brought me up.  I led on into the snow that had begun falling as the Alaskan twilight wrapped our world in a blue-gray veil.  Spindrift poured down from above over golden rock that disappeared upward into cloud and storm light.  We climbed step after step of rock, finally reaching a highway of ice that led us up to the Nose pitch at last. 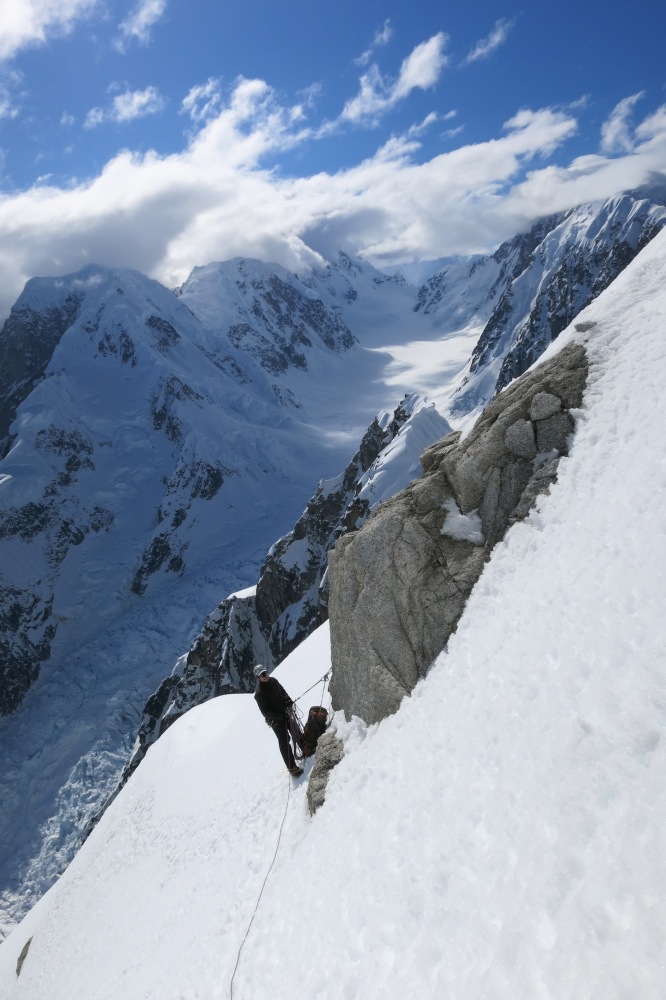 We pitched our Firstlight on a small ledge other parties had chopped.  We slept tied into our harnesses and sliding slightly towards the abyss all night.  We melted water and fell immediately asleep. 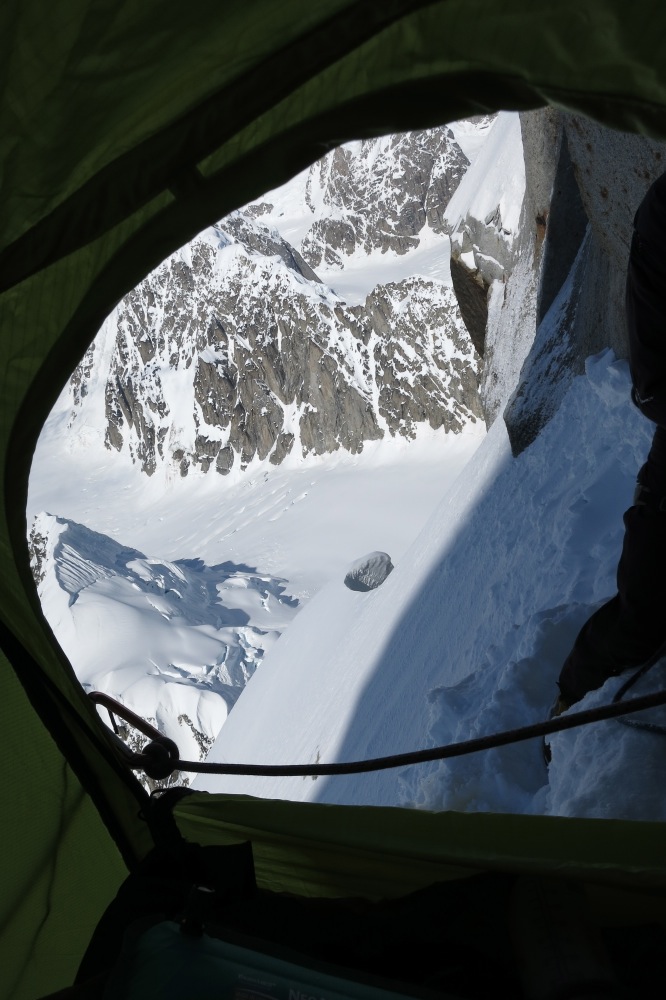