“Six days, wow! I wouldn’t be able to do the entire Wonderland Trail in six days. But you’re young.”

I grimaced. The ranger at Mt. Rainier’s Longmire visitor station was repeating what my husband, Adam, I, and our friend Jac had been hearing for the last month. Most people take 10-12 days to complete the Wonderland Trail—Washington’s iconic circumnavigation of its tallest peak—but we had signed up to do it in six. That meant 15+ mile days combined with some wicked elevation gains and drops. Oh, and there were 90+ degree temperatures in the forecast and two of the bridges were out. Had we bitten off more than we could chew?

I’d been thinking about how to maximize our energy level while getting together our gear the week before our trip. We reduced weight where we could, picking up some new ultralight stakes to replace our metal ones and deciding that one toothbrush would be sufficient for both of us. 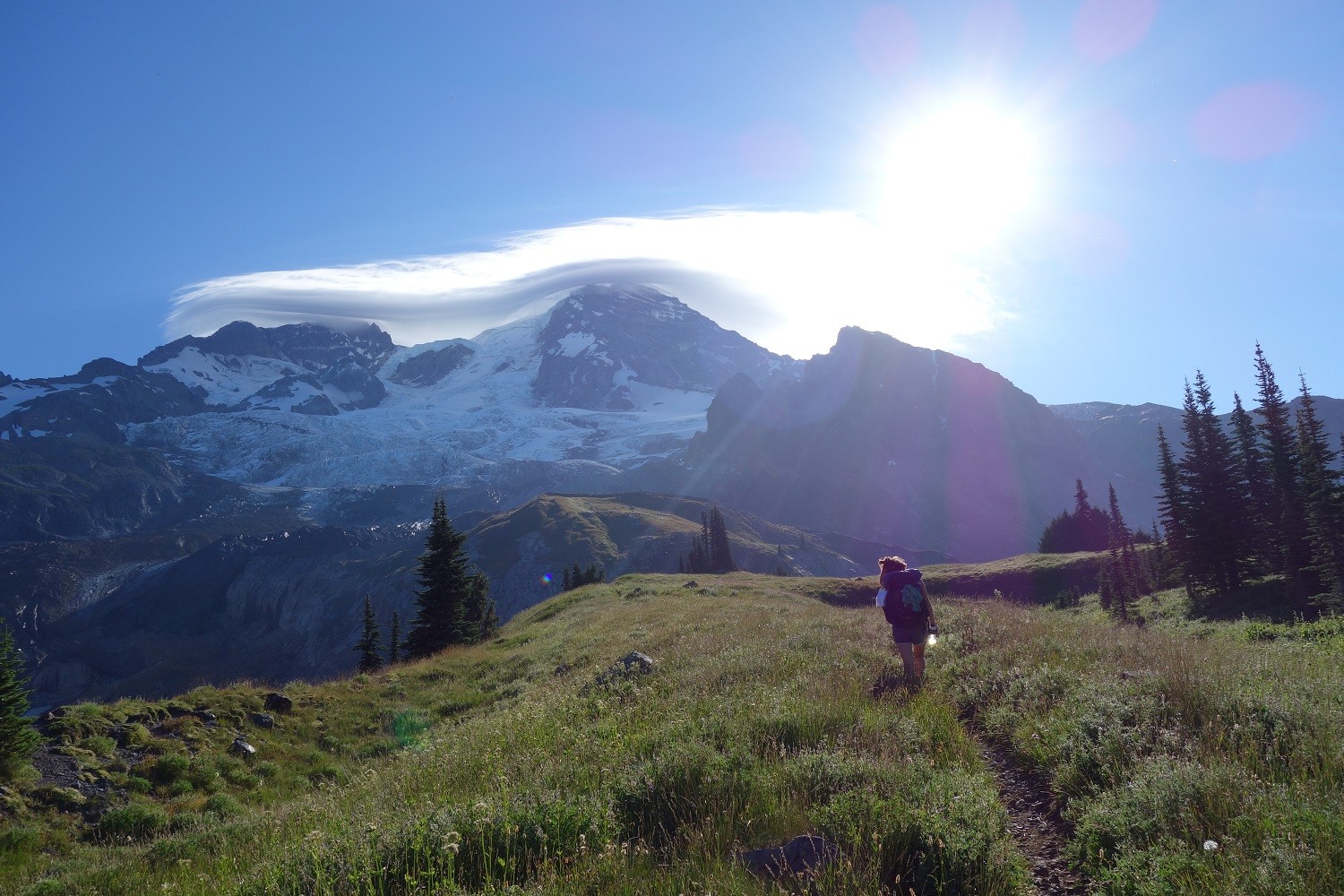 What we ate would also be a major factor in how successful we were on the trail. High-quality, high-calorie food was necessary to keep our energy level up. I had about 2,500 calories a day set aside for each of us in the form of trail mix, dried fruit, and other snacks, but I wanted to make sure we had at least one “real” meal a day. Breakfast had to be fast so we could beat the heat, so I packaged some instant cappuccino mix along with instant oatmeal and freeze dried fruit.

I spent a quiet Sunday afternoon pulling together homemade backpacking dinners for Adam and myself. I knew that at the end of a long day I wouldn’t have much energy left for a technical recipe. To simplify my on-trail efforts I put most of the meals directly into foodgrade storage bags. That way cooking dinner would be as simple as making oatmeal: bring the water to a boil, turn off the heat, and pour directly into your food.

It was also important to ensure that the meals themselves were varied, since I knew we wouldn’t be excited to eat pasta five nights in a row. To spice it up, I picked meals that incorporated couscous, instant rice, and dehydrated refried beans. And, since it’s almost impossible to get enough fat into your diet while backpacking, I brought along a lightweight plastic bottle filled with olive oil.

Five days later, we started our hike from the Sunrise parking lot.

Day 1: Vegetable Fried Rice: Fried Rice is one of my favorite backcountry meals to make, and this time I really went all out—adding in freeze dried mixed vegetables, dehydrated onions, dried shiitake mushrooms, and dried broccoli. And of course, olive oil. About as nutritious as a backcountry meal can get!

We were spending the first night at Mystic Lake camp—10 miles from our starting point of Sunrise. I was happy that we got there before 6 pm—just enough time to eat and catch an early evening swim in the lake. In my rush, I inadvertently added too much water to the bag of rice. So it was more vegetable rice soup than vegetable fried rice. Fortunately, it was still delicious, and we finished it quickly. Time for the lake!

The lake was gloriously warm, with no mosquitoes and a picture perfect view of Mineral Mountain in front of Mt. Rainier. We stayed by the water’s edge admiring the view until dusk, then headed back down to our camp.

Day 2: 7 Layer Bean Dip: I saved 7-layer bean dip for our first big day on trail—16 miles from Mystic Lake to South Mowich River. We were all trying to find our trail legs that day, and I knew we’d want a hearty meal at the end.

I started out munching on dried coconut, potato chips, and trail mix during our big climb into Spray Park. The ranger at Longmire had almost insisted we take this detour, and when we got there it was clear why. The meadows were awash in lupine, indian paintbrush, tiger lilies and more.

Hours later we made it to South Mowich River camp. It was late (the result of lingering in the meadows), but after the previous night’s soup incident, I was determined to add less water than I thought I needed to the bean dip. After ten minutes I tasted the concoction to see if more water was needed. Exactly right! And not a moment too soon since we were famished.

After dinner, as we were settling into our sleeping bags under the stars, Jac reminded us that it was the Fourth of July. How quickly you lose track of time in the backcountry! As we drifted off to sleep, I thought I heard the sounds of fireworks going off in the distance.

Day 3: Curry Couscous with Mixed Vegetables: Curry couscous was the furthest thing from my mind when we made it to camp on the third day. Our backcountry mettle was tested right from the start by our first river ford–the South Mowich bridge had washed out a week prior. When we got to the crossing, it was clear that it would be risky to ford the river directly–what I had thought were fireworks the night before were really the sounds of boulders churning through the river. Fortunately, there a number of downed trees that looked like they might offer a (relatively) safe way across. We picked one 30 yards downstream to cross at–and then spent the next 45 minutes bushwhacking our way back to the trail on the other side. So much for getting an early start!

Fortunately, the rest of the day was a series of rewarding vistas intercut with mountain lakes and river crossings WITH bridges. Late in the afternoon we reached Klatpatche Park and were struck by how low the water level was. There is so much water naturally in Washington State that it’s easy to take it for granted. The scene at Aurora Lake was a reminder that drought-conditions were in full force.

It was getting dark when we finally got around to making Curry Couscous at the South Puyallup River. For this one, I’d diverted from my usual recipe by adding a couple of tablespoons of powdered coconut milk to the mix, and the result was a smooth, rich flavor that wasn’t overly cloying. Definitely an addition to keep in mind for future meals.

What should have been our hardest day on the trail — 18 miles — went by in a heartbeat. We spent the earliest part of the morning at Emerald Ridge admiring the cap cloud on Mt. Rainier, and wishing we had an extra day to spend there. But the trail called us onward and so we began the long descent into Longmire to pick up our resupply.

We flew through the next six miles to Devil’s Dream, where we hoped to break for an early lunch. But biting flies were rampant, and it was difficult to stop and enjoy the scenery, so we pressed on and arrived at Longmire Ranger Station by 1:30 p.m., less than five miles before our destination for the night camp at Paradise River. But I wasn’t going to complain about having so much extra time to sort through our resupply.

We grabbed a bench in front of the ranger station. It was the hottest part of the day, so we were glad of an excuse to take a break in the shade. One of the rangers even brought us frozen watermelon. Trail magic!

Dinner that night was the simplest of the trip: Mac and Cheese with a single serve pouch of tuna. Except our hiking partner Jac decided to forgo three field roast chorizo sausages from her resupply. We got her to trade us for some chocolate covered espresso beans and peanut butter pretzels.

I thought we might have trouble finishing that dinner given the amount of protein that was in it, but it was gone in a matter of minutes. Hiker hunger had officially set in.

Day 5: Mediterranean Couscous Salad: I’m using the term “salad” here loosely, since most backpackers don’t get to pack in anything as luxurious as salad to the backcountry. But Trader Joe’s kale chips, paired with pine nuts, raisins, and couscous, was reminiscent of a Mediterranean feast while still punching in that important caloric load. I saved it for what promised to be the most spectacular day on the trail–the hike to Indian Bar.

The hike up the ridge from the south side of the mountain was excruciating. Long, dry, hot, and so buggy that we couldn’t break for more than a minute. We pulled out some chocolate covered espresso beans to keep up our energy and slowed our pace to something that we could maintain for the long haul and marched on.

By the time we reached the highest point on the ridge we knew it had all been worth it. The panoramic was breathtaking, with Rainier shimmering in the late afternoon light in front of us, Mt. Adams to the south, and, in the far distance, Mt. Hood. We knew this was a special view– the rainshadow of the Pacific Northwest doesn’t always allow for this kind of magnificence.

Far below us we could see a rocky river bar encircled by half a dozen waterfalls. Camp! After we had our fill of the view on the hill we headed down to cool off in the river at Indian Bar and watch for wildlife on the surrounding hills.

Dinner that night could easily have been an afterthought if it wasn’t so tasty. The fresh, crisp texture of the kale perfectly fit our bucolic surroundings.

Frontcountry dreams: We hiked slowly the last day, stopping often to delay the inevitable return to the “real world.” The trail was empty as we crossed panhandle gap, except for herds of mountain sheep and the occasional marmot.

Near Summerland we began to see our first dayhikers, and, soon, there were crowds of them. We picked up our pace as we descended to White River, where we had a two mile road walk to navigate around the second missing bridge.

At this point, our conversation turned to what we would eat when we got off trail. Burgers! Sushi! Beer! For our next trip, I’ll have to look into how we can bring more frontcountry food to the backcountry.

Laura Lancaster started backpacking at the age of 12 and hasn’t let up since. After eating her vegetables every day while thru-hiking the Pacific Crest Trail in 2014, she is currently a freelance writer and editor living in Seattle, WA. Laura has work forthcoming in Survivor’s Edge magazine.