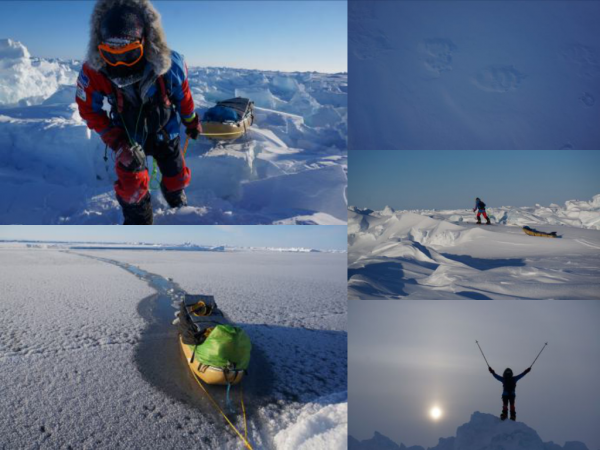 “I couldn’t decide if the Arctic Ocean was trying to swallow us whole or create the worst road block in history. It’s frustrating, scary and overwhelming all wrapped up into one big polar mess of emotions… Still there are few moments when I am not completely in awe of the beauty and power of this place.” –Eric (Day 32)

Eric Larsen and expedition partner Ryan Waters have reached day 47 of their Last North expedition, an attempt to break the unsupported ground speed record to the North Pole. Last week they crossed the 87th parallel, marking a distance milestone that sends them into the final stretch of the 500-mile journey. They have 102 miles to go.

The duo is finally making decent distance each day, sometimes reaching 17 miles via skis or snowshoes across improved ice conditions and under clear skies. Since the start of their trip, momentum has been bogged down by nearly impassible ice and whiteout conditions, as they struggled to make only 2 or 3 nautical miles, pulling sleds that felt like “dragging anchors across sand.”

Still, their daily reports haven’t been fully wrought with despair. Amid the seemingly austere and desolate swath of frozen planet, they’ve described a dynamic environment where nature is constantly shifting, drifting, and redesigning her icy architecture.

Plus, there are the close calls with polar bears that have broken up the monotony:

“We happened to turn around to two polar bears walking casually behind us in our trail, and I mean right behind us. A mother and her cub, who had been following us for a few hundred feet, just kept walking toward us as we began to yell and reach for our flares, rather anxiously I might add.” –Ryan (Day 5)

Over the expedition’s last month and a half, bad ice has made route-finding an overwhelming task; storm spells halted travel; and the pair has battled broken gear (including a compass), and the mental torment bred by excruciatingly slow progress. 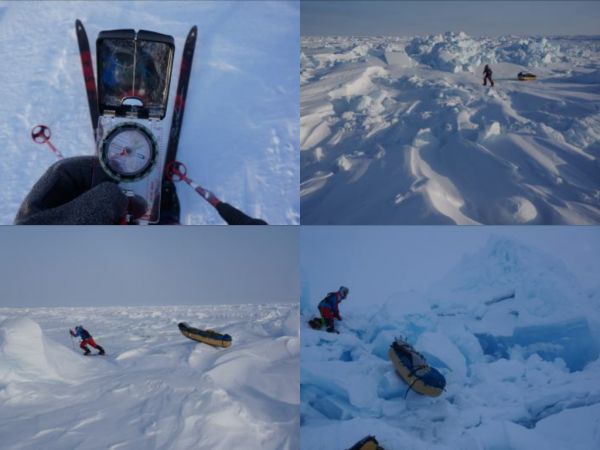 On day 16, Ryan fell through thin ice into the Arctic Ocean. “It took nearly an hour to get Ryan changed out of his now frozen solid boots, bibs and base layer. Luckily it was calm and clear and we were able to ski away the anxiety of a really close call,” Eric reported.

Fighting a downward spiral of mood, caused in part by an eastward drift that pulled them off course at least a mile one night, Eric has remained surprisingly positive:

“Still struggling to put one foot in front of the other today, tucked behind my goggles and fur ruff, I was left to contemplate the ‘whys’ of my life. Most specifically, why I as here. … However this place, and this type of adventure is one of the most unique in the world. I feel it is important to tell the story of this place before it changes forever.” (Day 35)

The team crossed paths with a solo Japanese skier and came upon his tent as he was waiting to be picked up. Recently, they’ve been able to achieve greater distances each day, and after 13 solid miles on April 23rd, they crossed the 87th parallel, marking the homestretch of their journey. 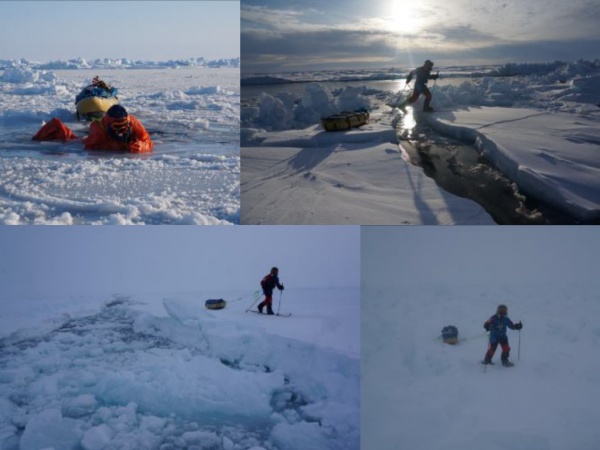 According to their reports, moods have lifted with the forward momentum, all while they continue to get about only four hours of sleep a night and spend more than 12 hours moving across the ice each day.

On Day 42, Eric managed to report of the beauty he was witnessing out there:

“There was a little bit of snow on top of the windpack and all the crystals were reflecting a million angles of light. … Randomly you just see a square block of ice sticking up out of the white top and it looks like a layer cake and the blue of that ice is so blue and turquoise. Just gorgeous. Totally gorgeous.”

Join us in cheering on Eric and Ryan through the final push of their quest to the pole.