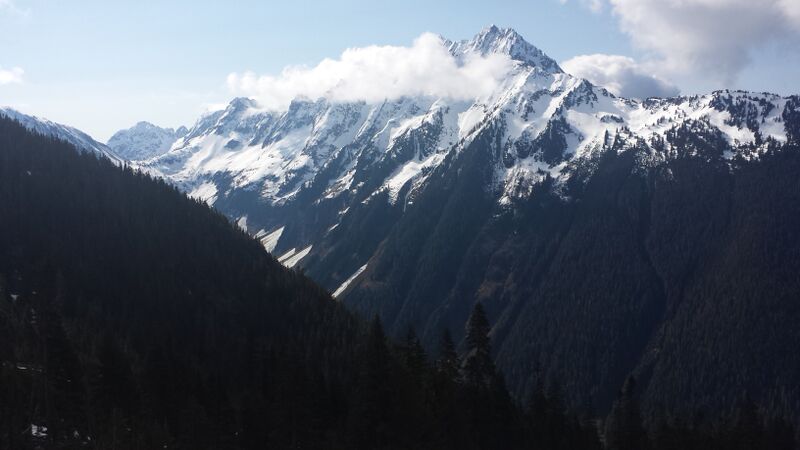 Ski mountaineering season had a brief but memorable run in the Pacific Northwest this year. It began quietly as daylight assumed the majority of the day and the snow line retreated to a happy point somewhere between ideal coverage and decent road access. With a weekly stipend of two days for adventure, skis tend to provide the ideal mode of transport. The ability to cover ground both uphill and down in an efficient manner is not something to be taken for granted. Sure, the method is not without its drawbacks but snagging A-framed ski tips on slide alder and old growth downfall is not something to get hung up on, so to speak.

My early season objective was to climb and ski the “Queen of the Cascade River” as Fred Beckey calls her, also known as Eldorado Peak, a classic climb in Washington’s North Cascades. Moderate in exposure, this climb does require a degree of comfort in navigating variable terrain across scree, glaciers and potentially unstable snow. This aesthetic peak is iconic for its defined final ridge line that, over the course of the season, slowly sculpts in the wind and sun into a “knife edge” that yields a heart-pumping final push to the summit. From there one can take in the surrounding grandeur of the North Cascades and contemplate the unique nature of the ascent across various biomes of thick, rain-forested valley floor to the snowy alpine whiteness above. 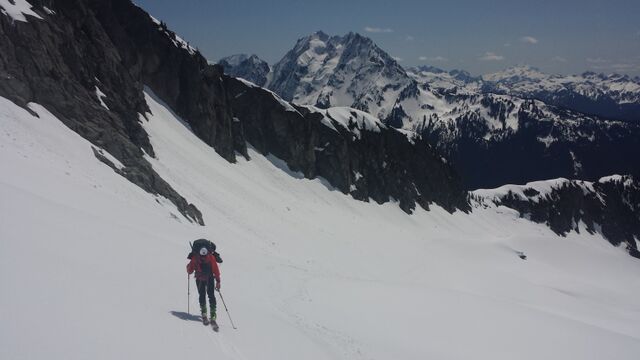 As May Day riots threatened all civility in Seattle my ski buddy Matt and I quietly slipped out the backdoor to head north. The miles clicked by as we followed the Cascade River Road to the trailhead just inside of the North Cascades National Park. Celebrating the dusk of the work week we kicked off the weekend with a beer a piece and a peaceful night in the parking lot complemented by the luxury of the pillows we had tossed in the car at the last minute. It’s all about the little things in life. Even after dark our tribe seemingly grew by the hour as a handful of other weekend-confined adventurers pulled into the parking lot with sleepy eyes and skis on their racks. 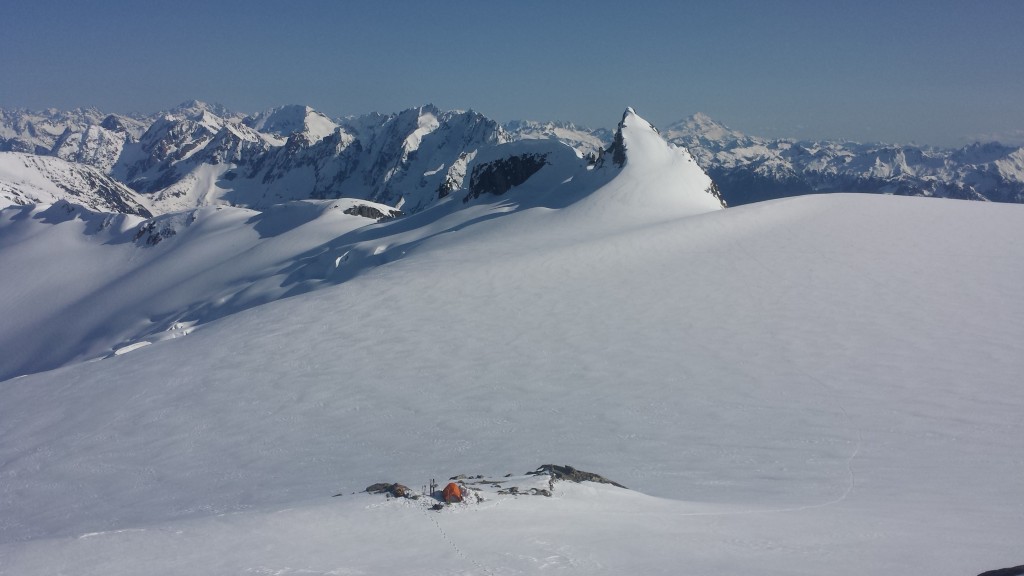 We rose with the sun and hit the trail with light heels. Soon the notorious jungle of the North Cascades valleys had taken us into its green room. Shag moss rolled right up to the sides of the trail with a disregard for human encroachment. Timeless timbers lay prone across, over, above and below the trail that we followed upward. Distracted as we were, we pushed up and out of the dense valley, across melted-out boulder fields, through the interspersed snow patches and finally to a place where we could punctuate our efforts with the satisfying click of ski bindings. 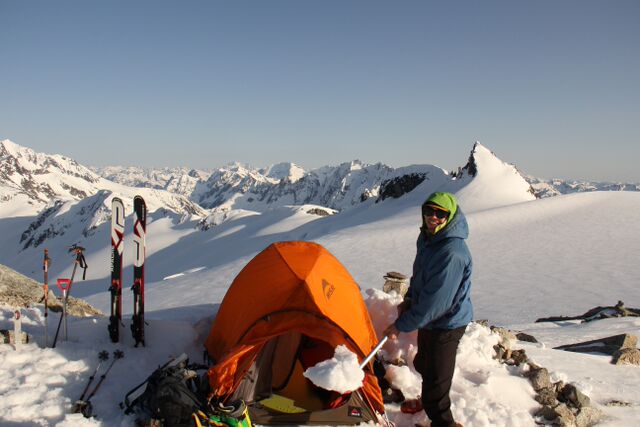 We skied uphill in nearly a continuous flow until we crested the final rise of the southern reaches of the Eldorado Glacier. From there we took in the Queen for the first time. As the minions in a new kingdom, we gingerly crossed the enormous ice cap and ascended the first step of the East Ridge of the peak to dig out a bivy for the night. As we worked to build camp and brew up our dinner, the full monarchy of the surrounding North Cascades drew their court around us. Forbidden Peak to the East, the threatening tyrant of Johannesburg Mountain to the South, and Glacier Peak and Mt. Baker hemming us in on either side from the south and northwest. 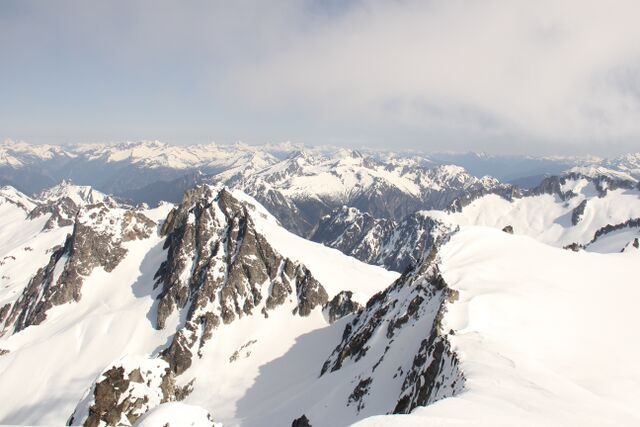 We rose late with the sun, brewed coffee and enjoyed the time cushion afforded to us by our efforts to carry skis up the mountain. Fast forward a couple thousand ski boot-kicked steps and there we stood just below the iconic knife-edged summit ridge of Eldorado Peak. The surrounding peaks of the North Cascades were clear to see in their glory. The only thing bringing the experience back to earth was the group ahead of us pitching out the knife edge while discussing how many calories they had burned thus far on the climb, call it a commercial break from the sublime. 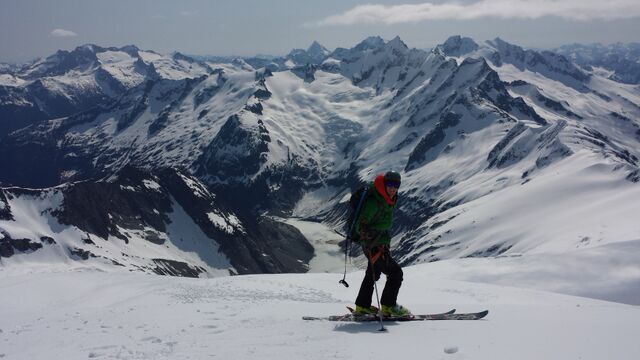 Once the group had passed we gingerly followed the narrow ridge up to the true summit at 8,868 ft, nearly 6,700 ft above where we had left our car. We snapped a few shots and descended the knife edge eagerly toward our waiting skis. Skis replaced crampons and after a customary pole tap to gain solidarity of stoke, we cruised the ridgeline laying down broad sweeping GS style turns for a continuous 1,500ft. Aside from a brief recess to break down camp we were able to ski nearly 3,330 ft of ideal spring corn right to the edges of the snow line. From there we dropped our boots and booked it back down the boulder field, through the North Cascades’ “Hobbit Shire,” across the single log balance beam across the river and back to the trailhead. Once the packs and skis were dropped I hustled it back to the river and fetched a couple of beers to seal the deal. All in it was an incredible ski with a great partner in our backyard wilds of the Pacific Northwest. 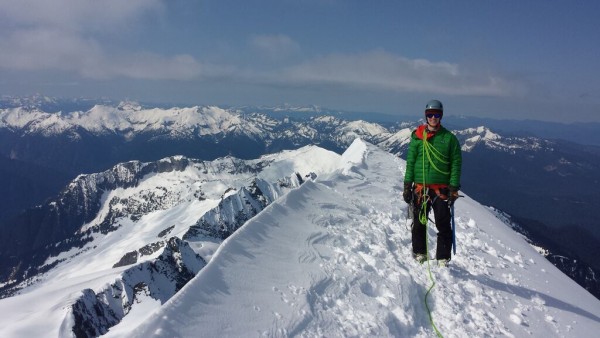 Take the Cascade River Road from Marblemount off the North Cascades Highway (Hwy 20). Drive to Milepost 20 and park in the well-defined lot that includes a restroom. There are no fees for camping or parking overnight, the National Park Service does require a free permit to help protect the wilderness which can be picked up at the ranger station in Marblemount.

Eldorado Creek Route – the start of the trail can be overgrown and is located 100 yards down the road from the parking lot on the right hand side. This will lead to an established log crossing over the Cascade River and a decently defined trail leading uphill. From here at an elevation of ~2,150ft the trail pushes through a steep forested section, to a talus field at ~4,000ft and then depending on the time of year to the snowline.

The climb can be done in a long day or in two with excellent bivy sites at 5,400ft and 7,800ft. The best time of year is from early May on as the days grow longer and the weather improves. It is important to check the condition of the Cascade River Road and the snowpack to determine at what elevation it begins.

Brothers hailing from the Pacific Northwest, Carson and Austin Bowlin were on an adventure of a lifetime traveling overland from Seattle to Chile climbing, skiing and surfing along the way. Their trip partners included Nuun, Mountain Safety Research, TorFab, and KAVU.  Their trip south was documented at offbelay-americas.com. After returning from South America and receiving a huge hug from their Mother, they now reside in Seattle, Washington and spend significant time in their backyard range of the Central and North Cascades.