Photos and Story By Steve Weiss

It was my first time in this foreign, beautiful country of Chile to splitboard and, it would be the first time ever attempting to summit a peak and fail, multiple times.

The Chilean Andes are unforgiving – windy, wet, and cold – even when the sun is out on a bluebird day. They are considered the 2nd tallest mountain range in the world, sitting just below the Himalayas. Because of its incessant high-powered wind and at times bombproof surface, you can find yourself seeking a peak and being pushed off it. Nevados, a volcano that is located just outside of the Nevados de Chillan resort is the epitome of being forced for multi-attempts.

Nevados is a volcano that is located just above the resort of Nevados de Chillan Northeast from the last chairlift, Mirador. When first arriving to Las Trancas, the town adjacent to the Nevados de Chillan resort, and hearing about its glory and fantastic snowboard lines, we knew we had to get it. We had heard stories of people being denied success because of the habitual wind so we had planned on at least getting denied once. What we didn’t plan for was how many times it would really deny us. 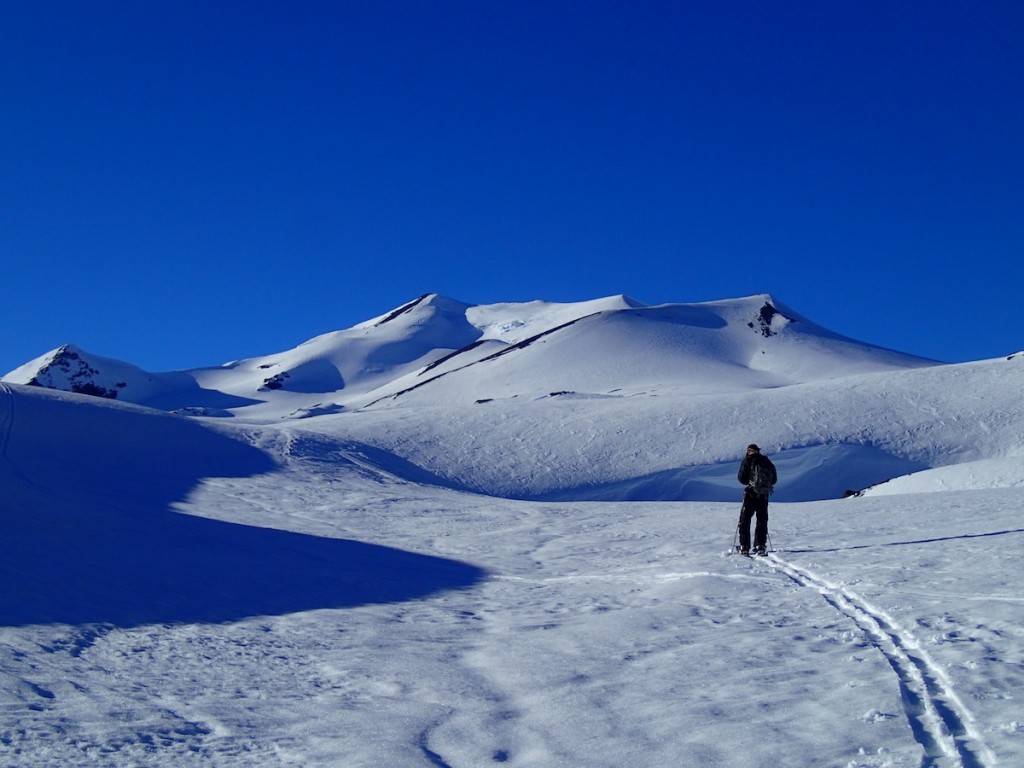 On the 1st attempt we tried going straight up from the bottom of the resort, because we didn’t want to pay for passes, and heading straight up to the peak. After two and half hours of hiking, the wind picked up and nearly blew us off the mountain, literally. It was strong enough to knock us over while skinning. On the 2nd attempt we made the decision to stay on the mountain in a Refugio, a mountain hut, located just outside the resort. By doing this we could wake up early and save time from hitch hiking up. Hitch hiking up to the mountain was our only choice in getting there besides walking, but because people don’t start driving up there until around 8:30-9am, you lose precious needed time. Getting an early start at 7am, we wake up to a ripping wind again to the point of not being able to see. Sitting at only 7500ft with the end goal being 10500ft, we decided to bail on the 2nd attempt.

The 3rd attempt went same as the 2nd, but we got up onto a ridge 1500ft below the summit with a strong wind that could only be worse above. The 4th attempt left us really disappointed. We had gotten really close, reaching one of the final boot packs up, to find ice so slick your feet couldn’t catch. Because we had a bigger group of 6 and not everyone had crampons and/or axes we had to bail.

On September 17, after two months of time and two days after I was supposed to leave before changing my flight back to the States, we made what would seem to be a final attempt at this rival peak. Looking at weather reports we were extremely confident that this day would be the day – sun, bluebird, and 5 mph wind. All through September was rain and high wind. Having this change in weather was an obvious window for us to go. The night before, while everyone drank wine all night, we stayed sober, went to sleep early, and got ready for the anticipated intense summit.

That day we got up to the mountain at 9:00am by way of a Chilean from Chillan, a city an hour outside of Las Trancas, who picked us up in his truck. The air was cold, much colder than it was the previous days. It was cloudy in the valley but once we started getting closer and closer to the resort it cleared up and was bluebird just like the report said. This was odd, because the report was never spot on, so we worried that maybe the wind was more intense but hoped the predicted temperature was off.

We started hiking around 9:30am cruising up the cat tracks and trying to be as unobtrusive to the resort as possible. Reaching the top of the resort by 10:50am we were making incredible time. From the top we headed Northeast and were out on our own with nothing between us but flats, rollers, and the final summit. Breaking trail the entire way through the fresh snow that had fallen in days prior is always an arduous task that slowly takes your energy away even in flats. Before getting much further Mark had an idea to make an offering to Pachumama, the mountain god. In Latin American countries, people will make offerings to Pachumama because they view the world as a place they are visiting and want to appease the god while visiting her land. They will make offerings while recreating in the mountains but also while building homes. So we did the same, and seeing as we failed 4 times we thought that any little bit would help.

Getting past the flatter parts of the hike, we reach our first uphill portion of Nevados around 12:00. Skinning up through the first section was easy enough with snow under our feet for good traction. This would be the section that was ice covered stopping our 4th attempt. It wasn’t until we hit the top of this that we realized how much climbing we still had. Ski down a bit losing elevation, then boot pack up another, then ski down a bit, and boot pack up another. We felt like this was the Andes way of saying, “You’re going to have to work harder than your eye can see.” Reaching the first hike up, we found it to be a bit icy and had to switch to crampons and axes. The ice can be extremely slick and with rocks below you going without crampons can be incredibly dangerous.

The entire time, the wind stayed at a lull, gusting every so often as we got higher in elevation. The sun stayed out too. It was just the perfect day to go and do this, or maybe it was Pachumama letting us do it. I’m not typically a spiritual person but a part of me believes it was her letting us be there. I mean, c’mon, something had to be helping us.

After taking the small summit, we reached the next and summited that. Looking toward the Nevados summit from this summit, we could see another skin section. Finishing that skin section we finally, after 5 hours of skinning and boot packing, reached the summit of Nevados! We thanked Pachumama for letting us be there, high fived, took a summit photo, and the wind instantly picked up. Immediately we left and discussed what to snowboard. The pyramid, a line off the top of the summit looked wind-blown and unpredictable whereas the Lunar face looked good and because we boot packed up it, we knew the snow would be good. Lunar face it was, and it was a good choice. Soft blower powder on a 45-50 degree slope of open, clean turns top to bottom – it was incredible and could be one of the best lines I did while in Chile.

After turning off the GoPros and switching our snowboards back to skis to skin out, we had a shouldn’t-of-been shocking revelation that we still had to skin out, for 3 hours. I was exhausted getting out of there, breaking rules that I know I shouldn’t have like eating snow the entire way. I have never been so tired in my life but it was totally worth it. I feel extremely happy about my accomplishment and it goes to show that if you try enough times, you can get anything! Reaching our little cabin that we called home, after not seeing it for 8 long hours – I drank a celebratory beer, then hit my bed with a big smile on my face and passed out for a few hours as my body recovered from the hell that I just put it through.