Story and images by Sam Johnson

My arrival earlier this month in the town of Malargüe, Argentina, coincided with an important milestone on my current adventure. It has now been two years since I left home in the UK on my attempt to cycle solo and unaided around the world. 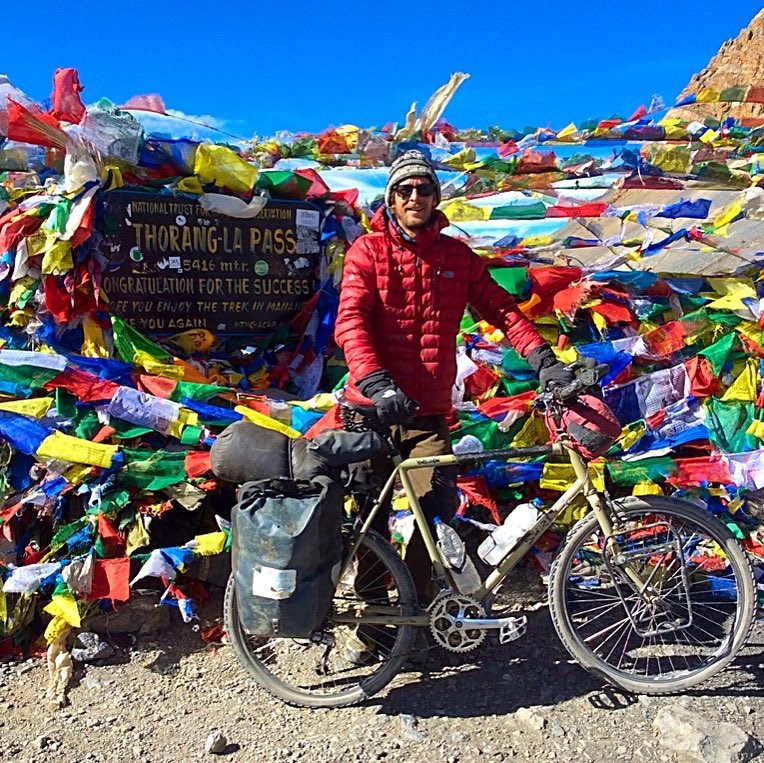 Before setting off in April 2017, I’d spent three months determining a workable route, building my bicycle and trying relentlessly to slim down my gear to fit into my four panniers while being comprehensive enough to cover all foreseeable eventualities I could think of. 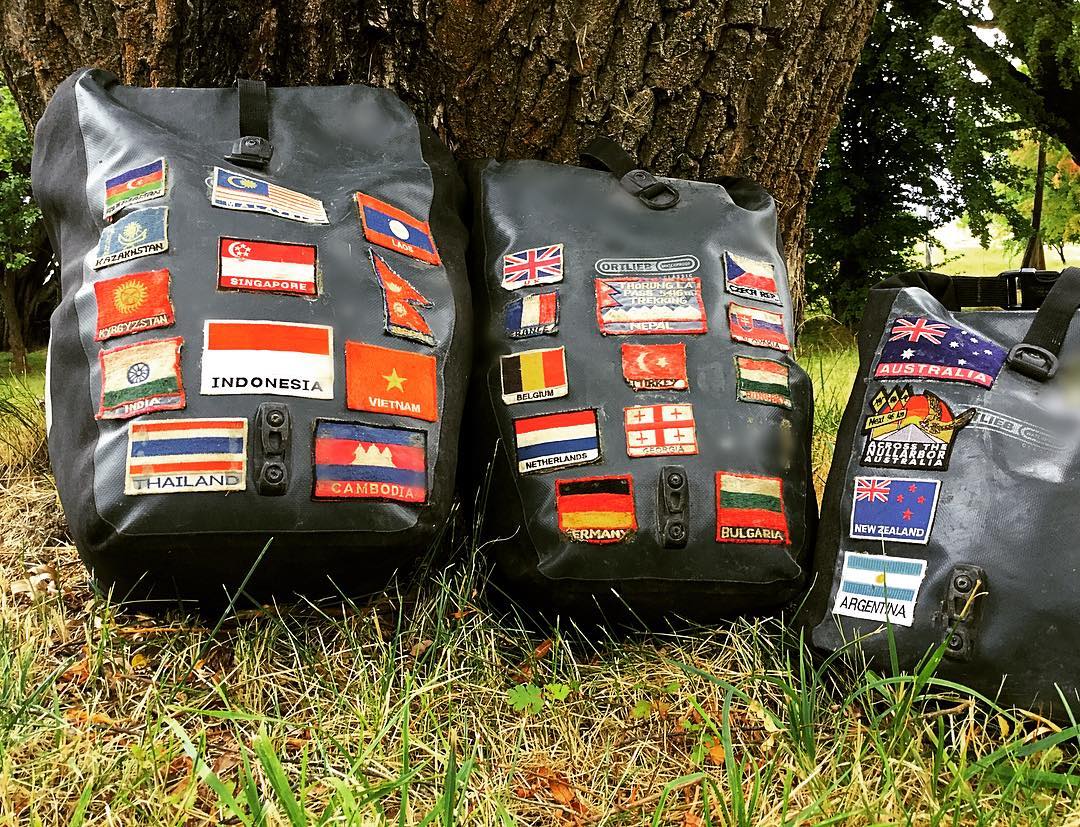 I’d never been on a cycle tour before. In fact, I’d not been on a bike since school. But after years of backpacking around the world, I was in need of new challenge. Trying to circumnavigate the world by bicycle fit the bill. When the time finally came to leave, I felt a nauseating blend of excitement and anxiety at what lay ahead.

Now, 24 months later, having navigated my way through 28 countries, four continents and over 32,000km, things still appear to be working out. 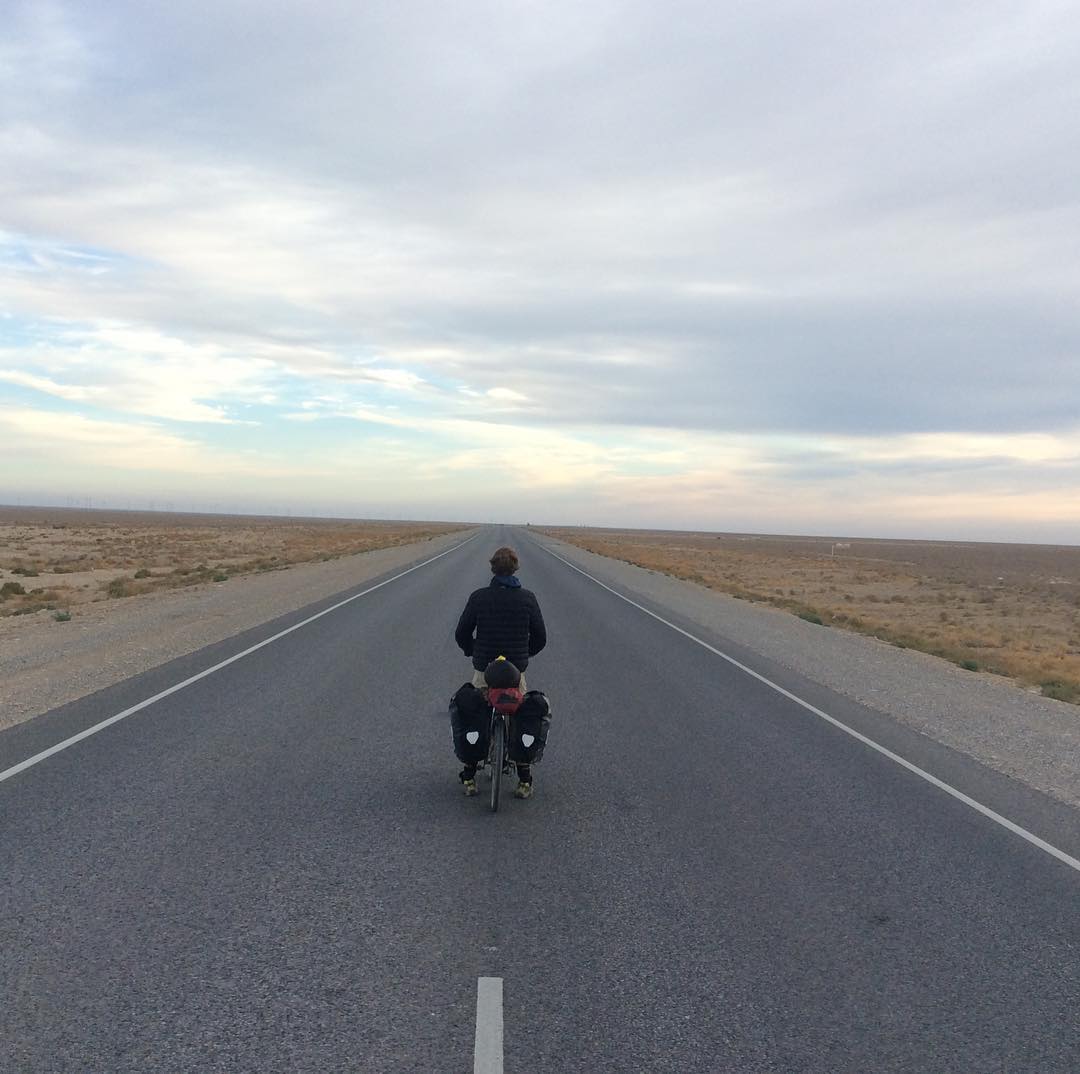 Of course, it’s been a mix of ups and downs (and I’m not just talking about the seemingly endless hills). I’ve laughed till it hurt, I’ve cried, I’ve been lonely, excited, angry and scared (sometimes all in a single day). I can now say hello in more languages than is probably ever likely to be useful.

I’ve found peace with the world and been driven to maddening despair by how unjust and unfair it can be at times. I’ve been hopelessly lost on more occasions than I’m comfortable admitting and as a consequence, spent far too much time sitting on the side the road poring over hopelessly inadequate maps.

I’ve watched helplessly as my little thermometer dipped to -23°C and despaired as it hit 42°C at the exact point I ran out of water.

So far, my journey has taken me through mountain chains, deserts, jungles, and rainforests, through vast cities, sprawling towns, tiny villages and into remote settlements. I’ve cycled along coastlines, canals, lakes, fjords and rivers and been left in awe on an almost daily basis at just how beautiful this planet of ours is. 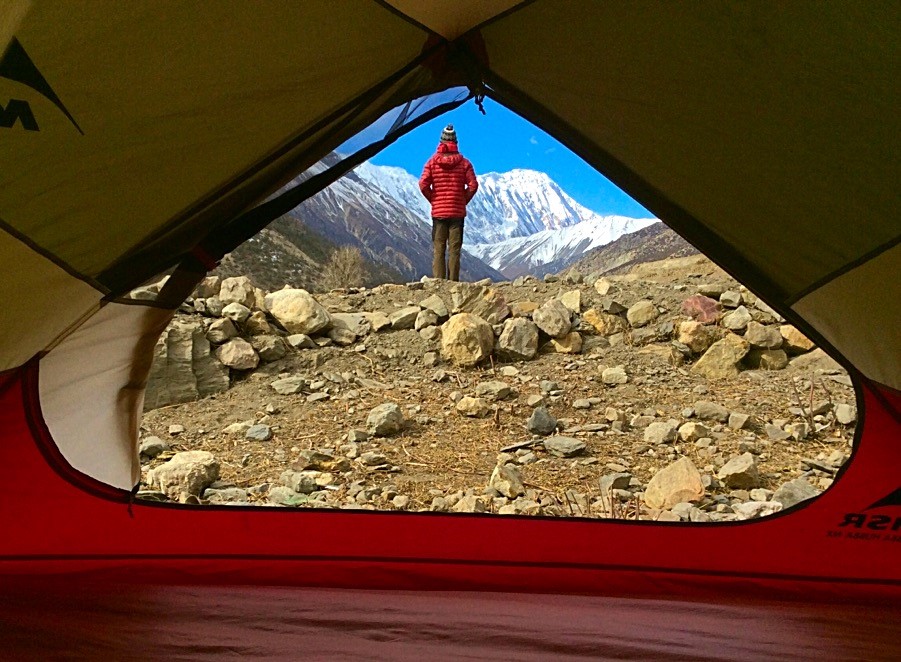 I’ve learned many things. Chiefly, that the world is not as scary as the media would have you believe but instead a place where human kindness and benevolence is the far more common expression.

I’ve often been asked what the single hardest part of my trip has been and my answer usually surprises people. Sure, getting lost in the Cambodian jungles and running out of water wasn’t much fun, nor is cycling uphill for days under the scorching sun in deep sand in Laos. But these difficulties pale in comparison to trying to convince myself to go—and actually making it happen.

Most of us who dream of long travel are met with plenty of barriers that prevent us from going. But perhaps the biggest challenge to multi-year travel—in my case, five years—is how to finance the trip. 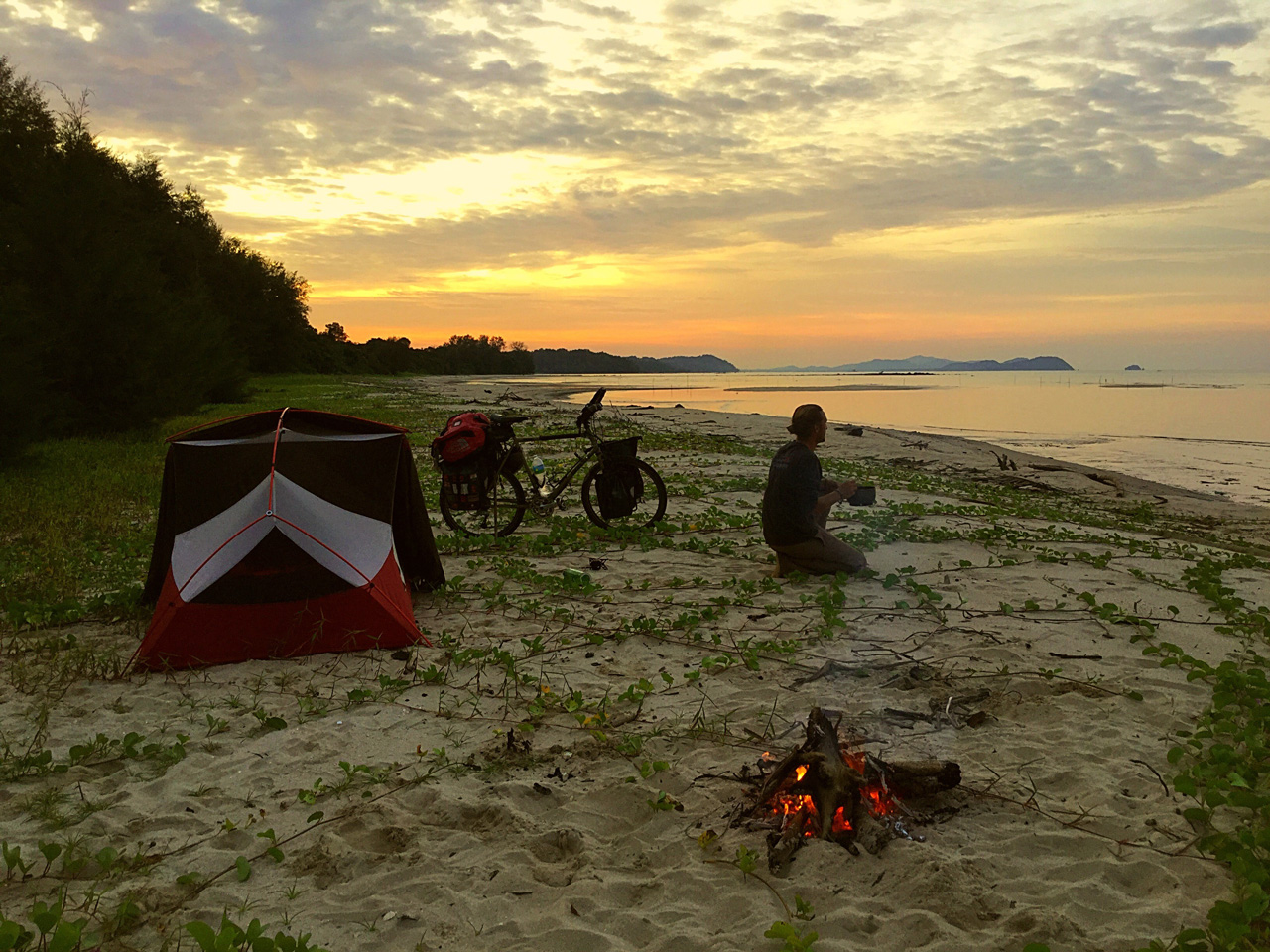 In my trip planning, I thought of possible ways I could keep my daily expenditure down by looking at the three biggest expenses any traveler has; transport, food and accommodation.

Transport costs weren’t really a problem; just the odd flight when the occasional ocean got in the way. To keep food costs down, I’d cook for myself each day, unless, like in south east Asia, it was cheaper to eat out. And, I planned to wild camp as much as I possibly could.

Whatever tent I chose needed to fit critical criteria. As light as possible, pack down small, be freestanding. And it had to be robust enough to handle challenging weather and cope with the wear and tear of constant use. As a bonus, it should dry quickly, be big enough to fit me and my panniers, and not be so outlandishly colored it didn’t blend into my surroundings. 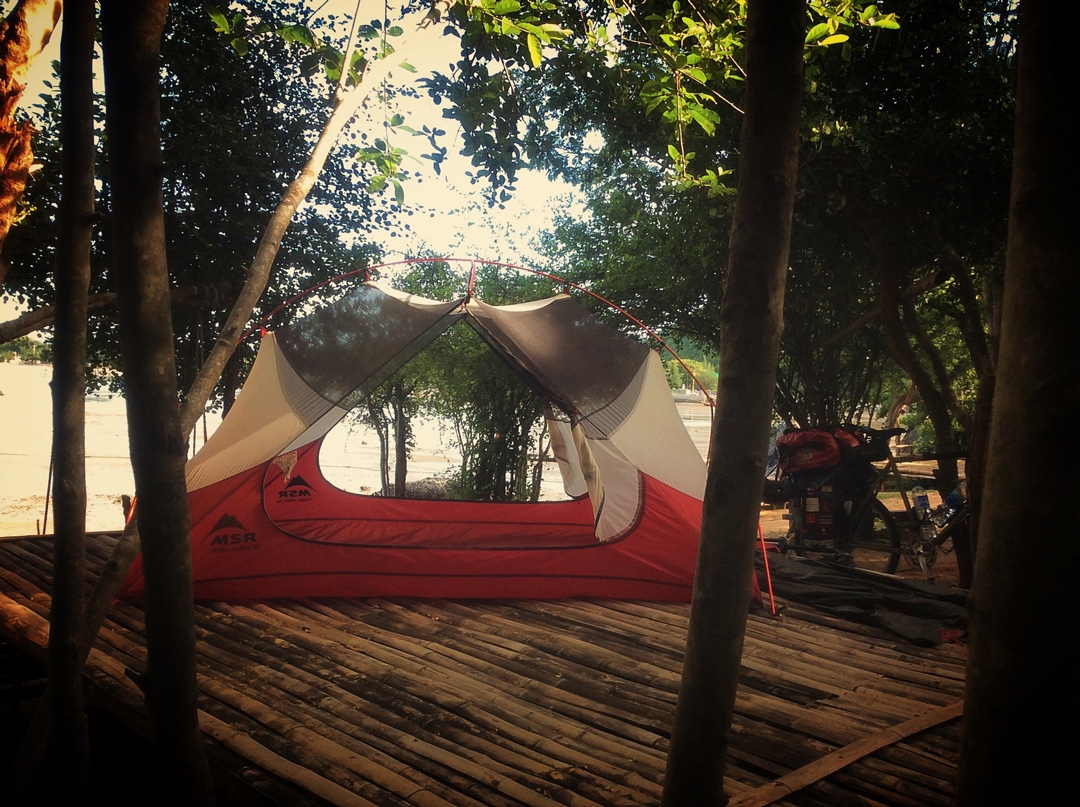 I spent weeks pestering friends and family to dig out their old tents so I could size them up. I visited dozens of stores, read countless reviews and got lost in forums discussing the manifold pros and cons to every imaginable make and model. Through all of this, one name began to stand out: MSR.

Search Instagram for “cycletouring” and it doesn’t take long to see those classic through-the-tent shots of the beautiful landscapes tourers find themselves in. Look a little closer and you’ll see that a good number of those tents are MSR’s Hubba Hubba. This tent has long been the go-to tent for the cycle tourer. I figured, if it was good enough for those who had far more experience than me then, well, it was good enough for me. Two years on, it’s a decision I haven’t regretted. 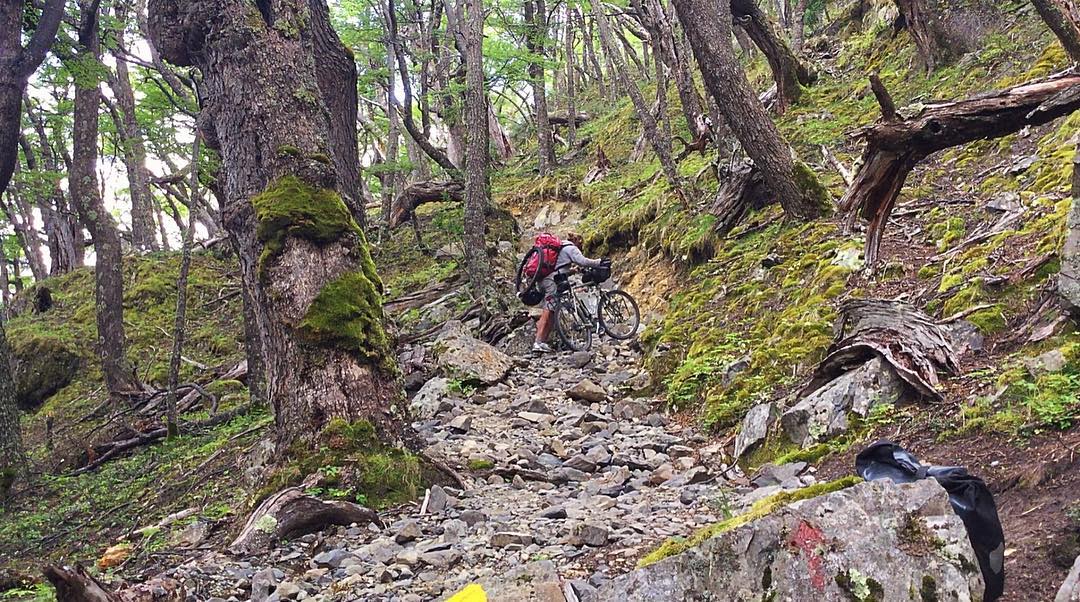 I’ll admit, wild camping hasn’t always been easy (if you’ve ever tried to pitch a tent in Singapore you know what I mean). But of the 736 days I’ve been on the road, I’ve managed to camp in the same Hubba Hubba for 642 of them and it’s never let me down. When I think back to all the tent’s been through, I can’t help but think that that’s pretty amazing. In Azerbaijan, when I was forced to camp at the port in Alat for nine days awaiting my ferry across the Caspian Sea, it withstood days of 80 kmph+ winds and driving rain. It withstood similar wind on the east coast of Malaysia, in Indonesia, New Zealand and almost nightly during my first month in southern Patagonia.

In Cambodia, it kept me dry through the monsoon season, and dried out in minutes at the first sign of the sun. It helped keep the worst of the cold outside in Nepal when the nightly temps would dip as low as -21°C as I cycled above 5400 m, and it withstood the sun as I repeatedly woke up to the scorching early morning heat in the deserts of Australia.

I’ve pitched it in disgusting buildings, at the end of piers, inside mosques, fire stations, abandoned hotels, churches and police stations. It’s been my home among ancient lava flows, atop mountain passes, deep in the jungle and amid endless expanses of vast deserts.

Camping doesn’t just save me money. It lets me spend my nights in some of the most incredible places with views that would surely cost a fortune if they lay outside a hotel window. I’ve seen the sun rise over the silent desert in western Kazakhstan, the full moon light up the glaciers of New Zealand and Chile, and listened in the early morning light as the tropical rainforests of Thailand came alive. Camping has given me the chance to experience the world at night in places few people who opt for hotels or hostels will ever do.

I’ve got about three years of cycling to go before I close my circle and arrive back home in the UK. I know many more adventures await. But I’m thankful to have my Hubba Hubba along as a companion. It has given me the freedom to camp wherever I find myself as the darkness rolls in, and the confidence to know that whatever the nights may throw at me, it will keep me safe and ready for another day’s ride. 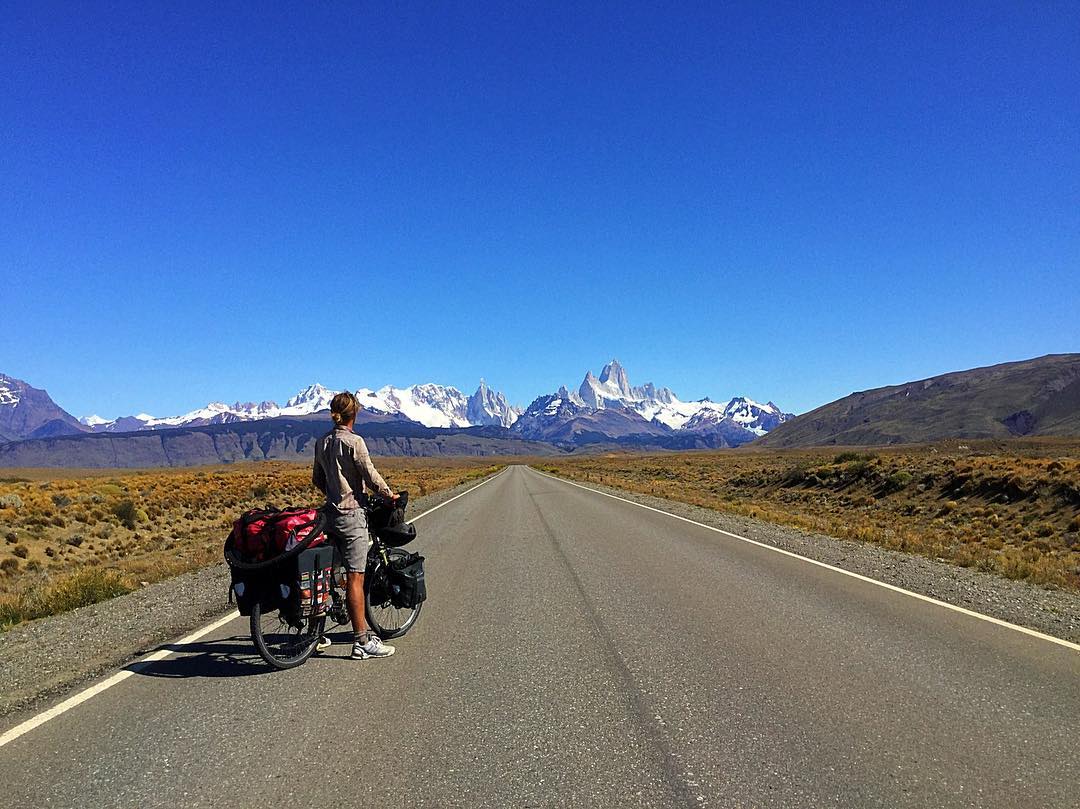 We’re thrilled to know Sam’s 2017 Hubba Hubba is still holding up. For 2019, the Hubba series is even more durable, featuring Easton Syclone Poles and our Xtreme Shield waterproof coating.