Last fall, the four member Fine Line Expedition crew, including Jay Smith, Kitty Calhoun, Jack Tackle, and Renny Jackson, attempted a first ascent on the East Ridge of Chiling II in the Himalaya. While the team had to stop a mere 80 vertical feet from the top, their journey is no less remarkable. This is their trip report. Learn what it takes to endure a climbing expedition on one of the world’s tallest peaks—with a packing list at the end.

On September 1st the Fine Line Expedition departed for India. After a meeting with our liaison officer and the Indian Mountaineering Foundation in Delhi, we flew to the 11,300’ city of Leh in the Jammu/Kashmir region of Northern India. Here we met our base camp staff and bought final supplies for the expedition. This was followed by a two-day bus drive over numerous 14,000’ passes to the high Buddhist village of Rangdom, our launch site for Chiling II (20650’). 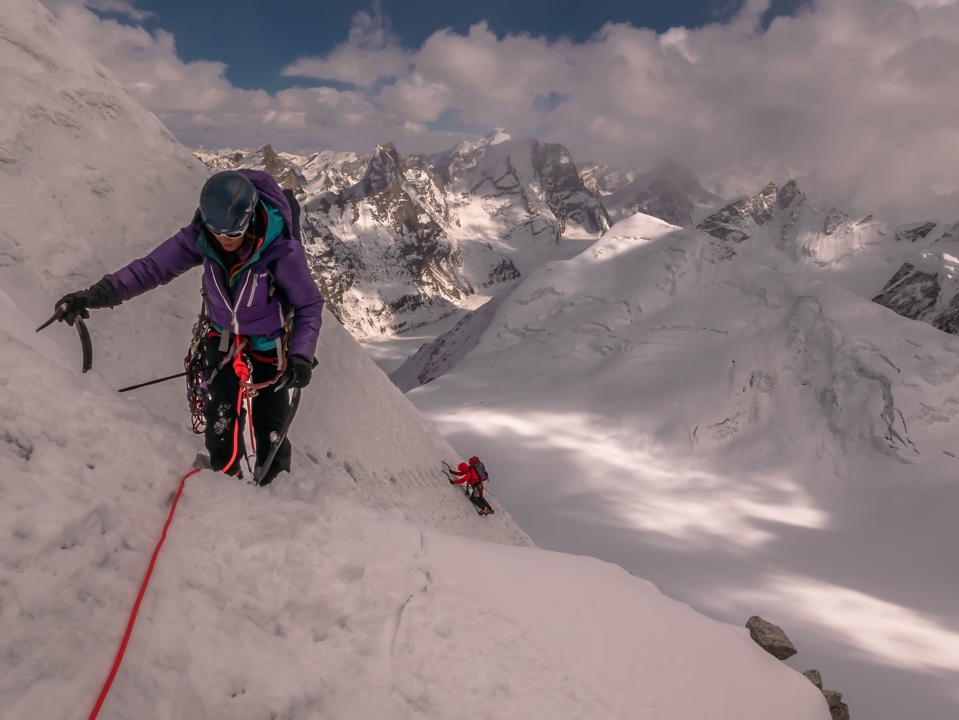 This mountain is listed in the Indian Himalayan Journal as Peak 5844 m (19,191’), but due to the sensitivity of the region—it borders a disputed area with Pakistan—there are no maps currently available. (The actual altitude turned out to be nearly 2000’ taller.) Our objective lay just off our only map and just choosing a route and location for base camp was challenging. Adding to this was the lack of porters or yaks to ferry 5 weeks’ worth of supplies to camp, about 5 miles away. Few climbers have ever visited this region and no local porters exist. However, we were able to hire some local farmers, who used their horses to pack our 20 or so loads in.

By September 13th we had established BC in the Lalung Valley at the toe of the glacier. We had also placed a temporary ABC further up glacier. Thoughts of attempting a route up the North Face were out, being unable to even access the base of the face via the Chilung glacier without porters. We were a bit relieved by this decision as climbing that face seemed more difficult, absolutely frigid and more problematic than any existing route that I am aware of, anywhere! We set our sights on the East Ridge, an elegant line that received plenty of sun.

For the next few days we established a trail up the glacier and placed ABC at 15,700’ at the base of a bench giving access to the upper glacial basin another 1100’ higher. We then made 1 carry to the start of the route and descended back to ABC. At this point, a three-day storm moved in and dumped a fresh meter of snow up high, with six inches in base camp. This was an unwanted new challenge that would add a lot more work than expected. What we had done previously in tennis shoes now required 6000 meter boots. The tents in ABC had been crushed and glacier travel now took three times the effort. Post holing on the upper glacier was exhausting in knee deep snow for miles. 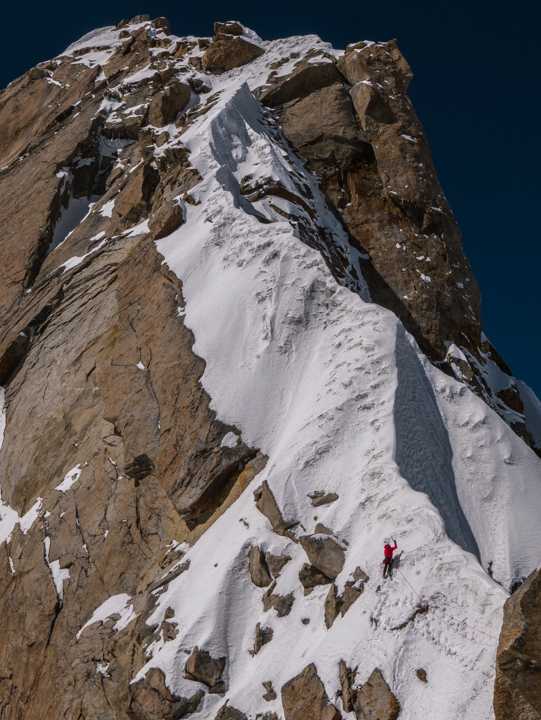 On September 29th we made our third carry to 17500’ at the toe of the ridge. Time was marching on and the forecast was favorable for only the next 3 days, just enough time to make the summit. A brief storm was predicted for the 4th day followed by mostly clearing on the 5th. We had to risk it. To delay at this stage could cost us the route. We decided to blast at dawn without rest and carrying 3 1/2 days food. We wouldn’t need much food on the way down. Besides, food is heavy. We did however, throw in an extra fuel cartridge for good measure. 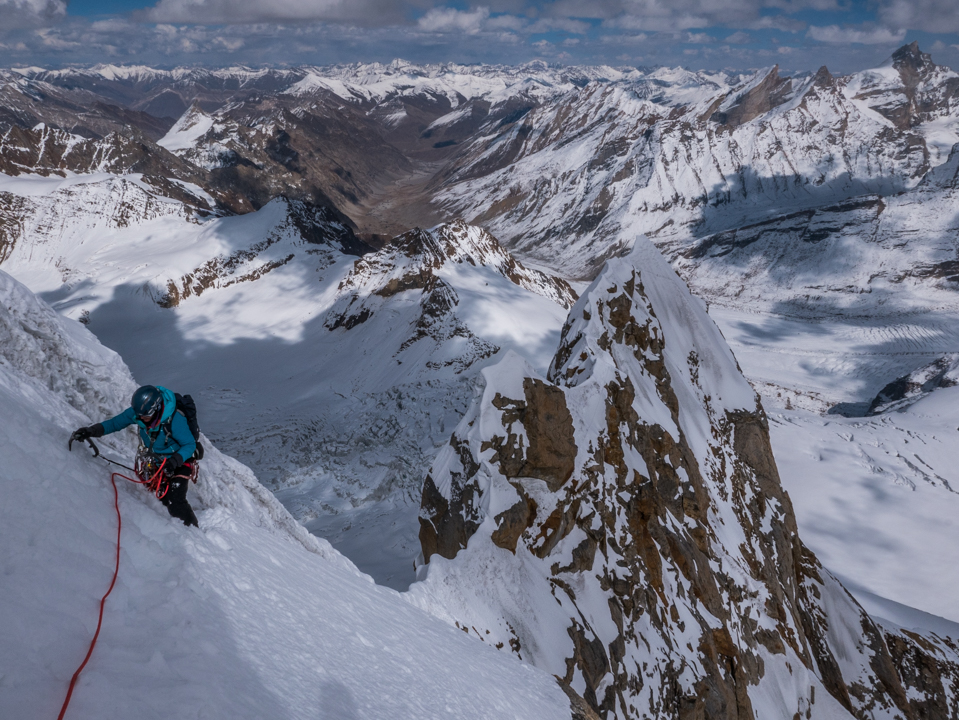 October 1st Kitty and I left camp 3 hours ahead of Jack and Renny. Kitty broke trail for 1000’ thru deep snow to the bergschrund. Quite a job with heavy packs. We continued above establishing a bivouac at 18,950’ on a narrow corniced ridge, just large enough for our 2 micro tents. The only suitable site in several thousand feet. Above, the real climbing began.

Day two on the route was steep mixed climbing up narrow ice runnels and a long rock pitch climbed in crampons. Some fine rock and more ice led to a second bivy site which took several hours of work to become inhabitable. We were extremely lucky to find a site at all, tight, but perfectly sheltered from wind and any stray stone fall. Here we spent two nights. Jack, Renny and Kitty climbed three pitches the next day and scouted the route ahead while I nursed one snow-blind eye in the tent. We were at the base of a rock tower guarding access to the central part of the ridge we called the Stegosaurus, due to its spiny backbone. The following day was spent climbing this tower to the ridge then fixing the ropes for the following day.

On our fifth day, having been on 1/2 rations from day 1, we climbed onto the Stegosaurus and traversed another pitch or two to our final bivy site. Unbelievable, spectacular views lay in all directions. We could see stacks of unclimbed 5000 and 6000 meter peaks, unvisited glaciers and an abundant first ascents surrounding us. However, we were on the finest granite peak in all the range. No other peak compared in quality or beauty. The Chiling peaks pierce the sky and dominate the landscape.

We arose summit day in inky blackness, a heavily frosted tent and frigid temps. We climbed in the first rays of the sun. Climbing as two teams of two, we leap frogged gear and stretched the ropes out a full 70 meters each pitch, making steady progress all day long. Afternoon brought some snow showers, but the wind remained calm and we pressed on. Near dusk, I could see both Renny and Jack in the belay above. Something was up. As I gained the crest of the ridge and the belay, I had a sinking feeling. 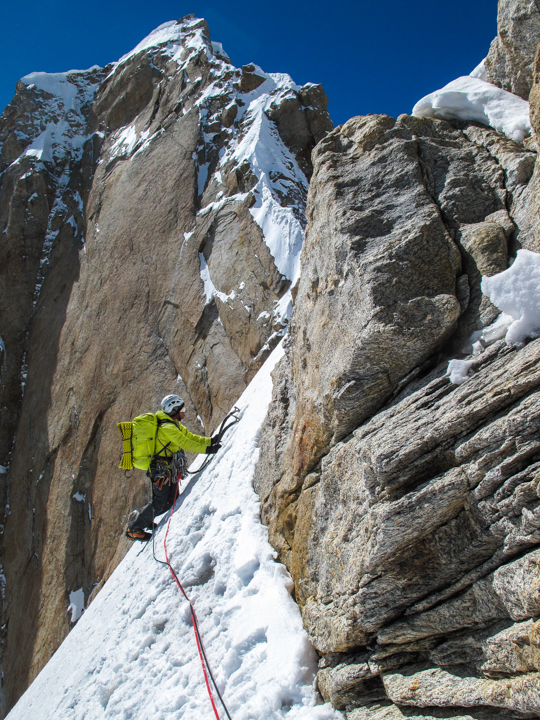 Even with 5 layers on, the guys were freezing. Jack stated that he couldn’t ever recall being as cold as he was at the moment, even after 26 Alaskan expeditions! Both he and Renny were losing feeling in their cores and were very concerned about frostbite or worse. I suggested that perhaps we could continue and dig in on the summit, but had a hard time convincing them that we might be able to get a cave. Certainly we had not seen anywhere so far, where we could really dig in. After a brief discussion, it was clear that the risk was too great and that the only prudent decision was to go down, just 80 or so vertical meters from the top. Still, it’s far better to retreat and live to climb again than to lose all your toes or worse. We began the long, difficult and problematic descent of reversing the route down the diagonal knife ridge.

All through the night we continued down. Temperatures had plummeted well into the minus double digits and we all struggled to stay warm. In the end, as we reached our tents as new dawn etched a thin red line on the horizon, Jack’s, Renny’s and my toes had gone numb, despite all the aggressive kicking that had been continuously going on.

Now, three weeks after the summit bid, our toes are still without feeling, though no visible damage had been done. Kitty survived unscathed, claiming it’s her womanly body fat, which no one can actually detect. We think she just has exceptional circulation.

Having been on the go for 24 hours, October 7th was a day to rest and recover prior to another long day of descending. With little to no food, we had to get down quickly and all went smoothly, rappel after rappel, till finally we were walking on two feet again. Back at the foot of the mountain and with an abundance of food, I think I ate for well over an hour, having consumed more in that time than the whole previous week. It would be 2 more days before we were back in base camp, but the mission was complete. With all gear off the mountain and back in BC, a small party ensued.

TBS = To be shared

Gear carried to base: