In our quest to conquer Te Araroa, New Zealand’s 3,000km tramping trail that runs the length of both islands, one last challenge lies between us and the end of the North Island: the Tararua Ranges. The first real mountains on Te Araroa, the Tararuas are fabled to be one of the toughest hikes yet. From steep climbs and descents to hazardous weather blowing in from the Antarctic, we are in for a real challenge, whether we’re ready for it or not. 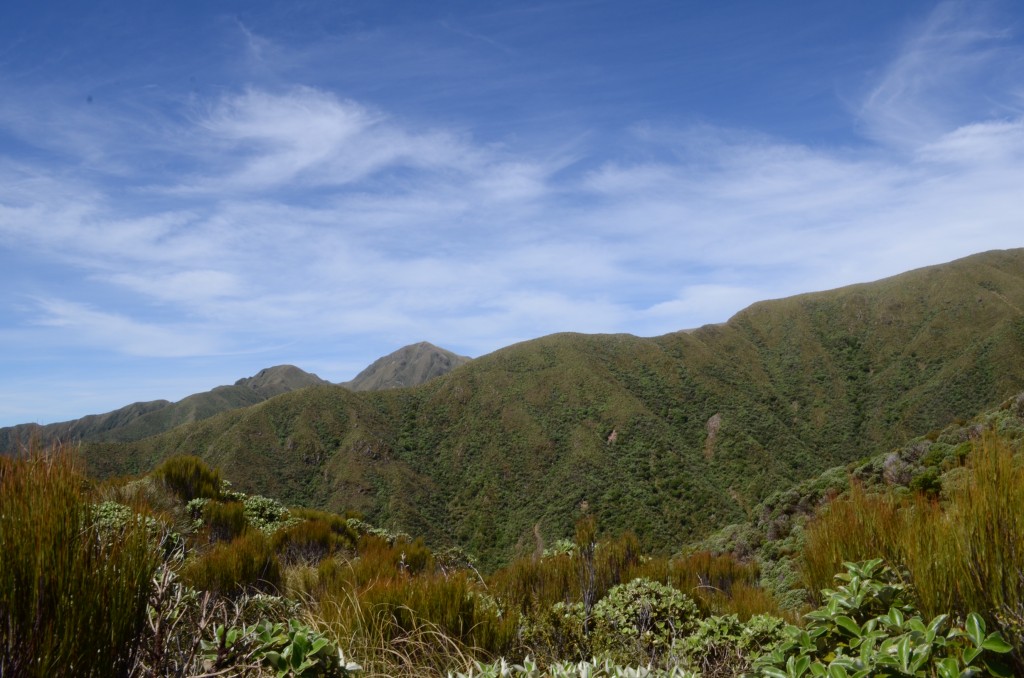 By now, my dad and I have been on the trail for nearly two months and have already conquered some challenging terrain: steep and muddy rain forests, rocky volcanic scree, and the concrete jungle of Auckland. Though the Bluff, the end of the trail, is still over 1,300 km away, we’re approaching the Tararuas, eager to put the North Island behind us. We’re joined by my boyfriend, Rory, who is about to get his first taste of true New Zealand tramping.

I check the Intentions Book at the trailhead. The last person to enter, one known as “Sparkle Princess,” has elaborately scrawled her trip itinerary in glittery green ink with a flourish of hearts and stars. I’ll just jot down our exit date in boring blue.

We head out. Within ten minutes, I realize this is going to be much, much tougher than expected. The trail shoots straight up the mountainside and we are soon pulling our way up by the backs of trees. Our meager 15 km goal is quickly abandoned when we roll into the Waiopehu Hut near sundown, some 6 km shy of our intended destination.

New Zealand is known worldwide for its extensive hut system. There are over 950 in the country, however this is the first we’ve stayed in. A husband and wife couple with their teenage son have just finished eating when we collapse in a muddy mess at the kitchen table. It’s quite a large (18 bunk) and relatively new hut with stainless steel countertops, a wraparound porch, and a sink with running water.

As our dinners rehydrate, I can tell Rory is in a state of shock, much as I had been when we first started the thru-hike. This is nothing like hiking back home in the Rocky Mountains. But, then again, that’s why we were here! Rory and I step onto the porch. To the west, the Tasman Sea breaks against the not-so distant shoreline as the sun sets over its aquamarine waters. And behind us a long line of lonely mountain tops cropped with tussock stretch beyond eyesight. That will be our path tomorrow.

Our second day on the trail takes us in and out of tree line where orange triangle markers point straight down, helpfully indicating an almost vertical descent! But the weather is fine and the mountainous scenery is like a breath of fresh air. But going is slow. By 3:00, we still have some 8 km and a big climb to go before the Dracophyllum Hut. I glance at the sky. There’s a whisper of a storm on the horizon. Two days ago, the weather had mentioned the chance of a system moving in. As much as we’d like to, we can’t stop here or else risk getting stuck on the ridge tomorrow in bad weather.

We push on, hoping to make the hut before dark. The ascent to the first saddle is long and arduous through waist deep brush. I cast my eyes out into the empty sky and the mountains beyond, half expecting to see a lone raven cruising at high altitude. But the New Zealand skies are lonely places since the great Haast’s eagle became extinct over 500 years ago. The pterodactyl sized bird must surely have been inspiration for Tolkein’s great eagles. With an eight to nine foot wingspan and swords for talons, this giant predator preyed upon the moa, another oversized bird similar to an ostrich. Both predator and prey became extinct shortly after the first humans arrived in New Zealand.

We descend into forest with the sinking of the sun. The trail is ill-defined and the scarce markers are difficult to spot in the darkening day. At last a tin roof glinting in the remaining rays. It’s not quite as glamorous an affair as our previous night’s accommodation. The cramped, two bunk shack barely fits three tired trampers and their packs. At nearly 10:30, we fix a gourmet meal of ramen and instant mashed potatoes, and get into bed.

Morning breaks heavy with dew. Clouds blanket the tops and threaten rain. There is only one way out and it’s onward and upward through the fog, with the highest point in the Tararuas yet to come. Noon finds us below Mt. Crawford’s bare walls, watching the gathering storm. As long as we don’t dilly-dally (and the storm does!), we’ll be fine. Dad looks skeptical. In what will become a regular routine, we weigh the pros and cons of moving forward or waiting it out. This time we go for it.

The climb is surprisingly easy through open ground and sparse tussock, but just to keep things interesting, the trail throws a few bouldering problems our way. My 67-year-old dad, who has a small, insignificant fear of heights, watches Rory and I find holds and the occasional heel hook before tentatively following us up. At the top, a light mist moistens our faces from the abiding clouds. As we follow the ridge line down to a t-intersection of mountain tops, the trail drops suddenly into forest. Though it is only 2km to the next hut, it takes us nearly two hours to descend! Yes, that’s one kilometer an hour. Swinging down trees, crawling under deadfall, jumping six foot drops in the trail, we finally crawl into the brand spanking new Waitewaewae Hut just as several other trampers are nodding off.

We eat silently and fall asleep with the knowledge that it is literally all down hill from here to Wellington.

Rory flies back to Colorado a few days later, leaving Dad and me to finish the North Island alone. After exiting the Tararuas, Te Araroa follows the coastline for several days. As we approach the capital city, the coastal towns become more and more frequent and soon we’re enjoying ice cream and espresso on a regular basis. Now that’s what I call trail food.

Wellington is a beautifully planned city with long greenbelts running the length of the urban area. Te Araroa climbs back into the mountains and passes above the busy streets until it drops onto the last beach of the island. After two and a half months, Dad and I have finally reached a major milestone in our 3,000km thru-hike. One island down. One to go.

Margaret Hedderman is hiking New Zealand’s 3,000 km Te Araroa Trail with her father. Read more about their adventures and watch videos from the trail at www.NewZealandOnFoot.com