I design hardgoods for MSR (stoves, snowshoes, water filters), so I’m no expert in shelter design. But I do have personal experience and probably a fairly unique opinion on what makes the perfect outdoor home. Tent? No thanks–too confining, too hot in the summer, too hard to get in and out of, not enough fresh air, and usually no view. I like tarps. 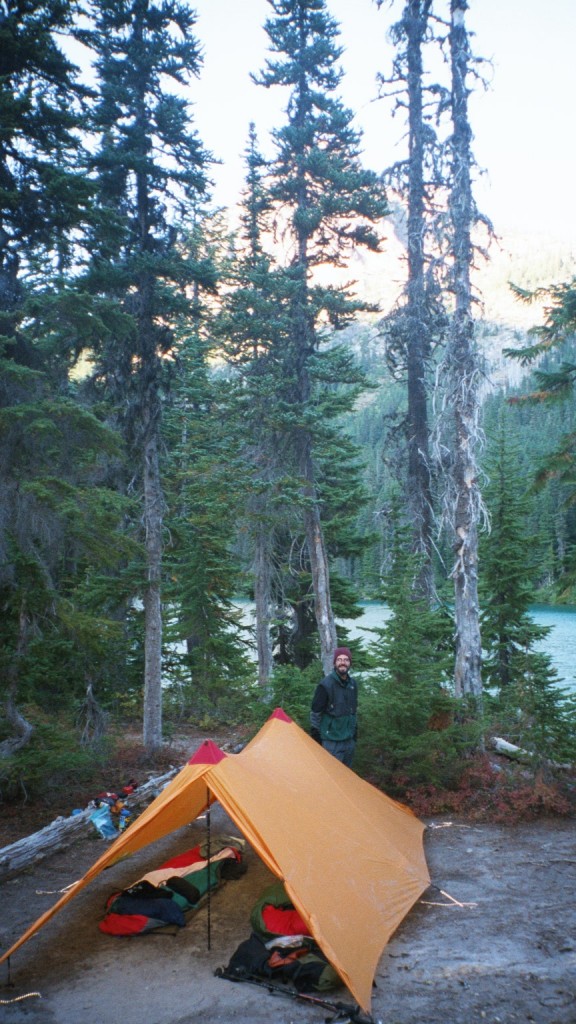 Don’t be afraid of tarps

In my experience, they don’t tend to build up condensation like tents. You can tie them to trees (no poles needed), and set them up in so many ways depending on the situation. In fact, they’re easy and fun to set up. My advice: Don’t be afraid of tarps. I almost always use a tarp and I’ve only woken up wet twice. Once because of limited site selection in very heavy rain (small stream going through the shelter). Another time we tried using a ground cloth and it ended up sticking out from the perimeter of the tarp—funneling water inside. I only recall a couple of bad bug situations that I wish I had some sort of mesh insert. I don’t have a favorite MSR tarp, so here’s a bit about each one I’ve used: 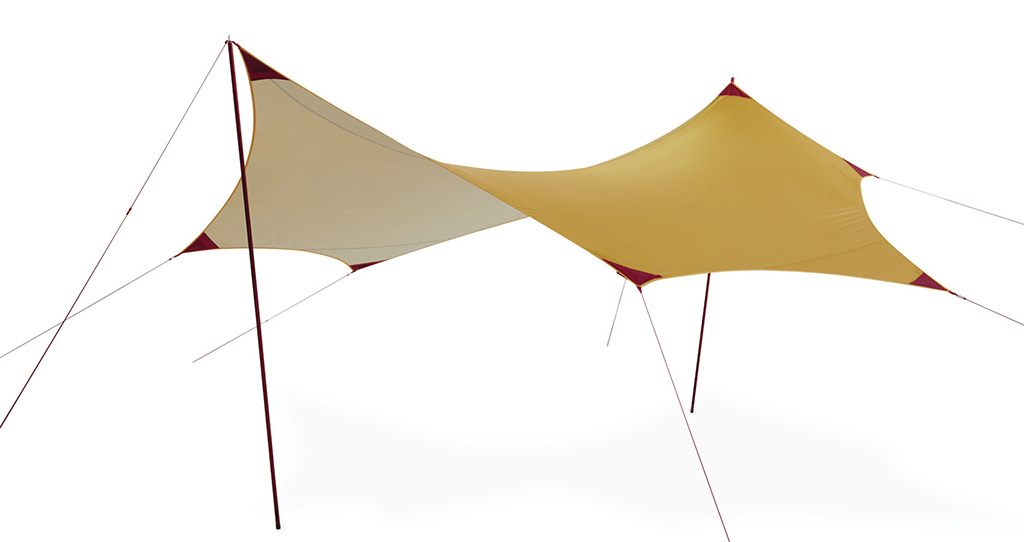 The MSR Outfitter Wing, now called the Rendezvous™, was my favorite for most trips—usually remote car camping/basecamp style camping. It’s big – (17’ 7” x 16’ 6”) yielding 200 sq ft of protection and you can walk under it, which is key for hanging out and drinking beers; great when it’s nasty out. When it’s sunny, it’s great shade. When it’s windy you can fasten one side down to the ground with the other side open and still feel like you’re outside. I lived under it one whole summer at a pond by my house. One time we set it up vertically to block the wind from the fire pit. One lesson learned: dead head your stakes when in sand, in windy conditions. 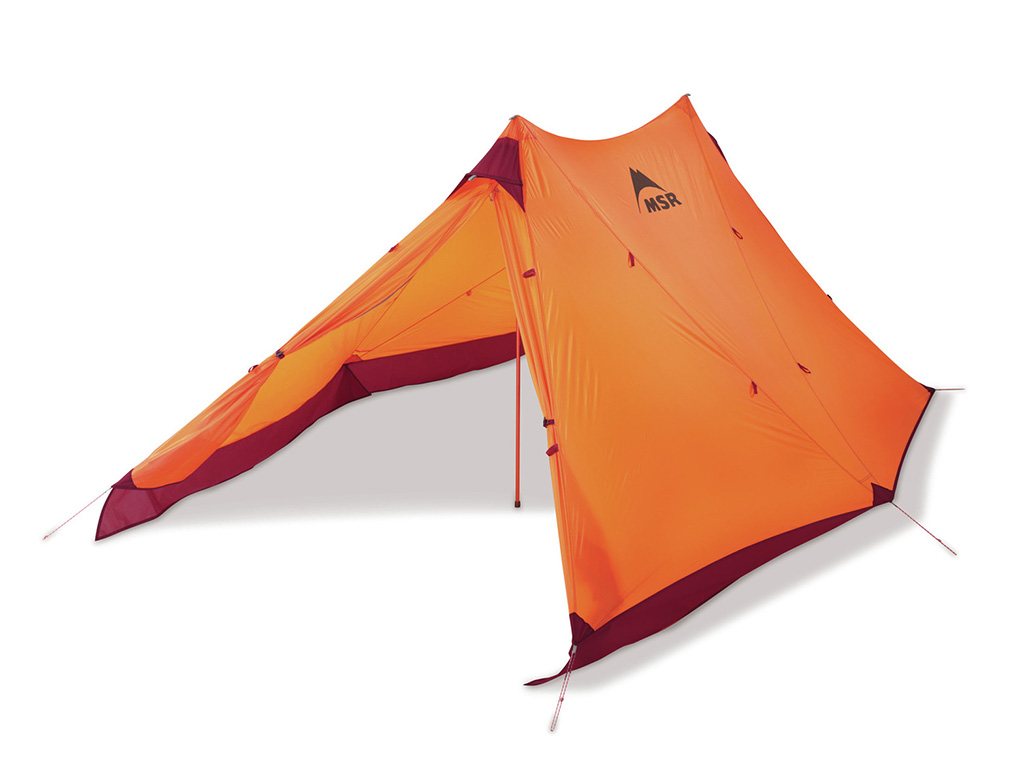 The MSR Trekker tarp (no longer made) is one of my favorites for backpacking or for a shelter. It was sort of similar to what are now called the Twin Sisters or the Thru-Hiker Wing. It’s super lightweight, uses trekking poles, and packs small. Depending on the weather you can fasten the bottom of the sides to the ground (or snow) or set it up a little taller and get good ventilation from under the sides. I spent a week living under it along the Lost Coast in northern California. The temps were hot, there was hardly any shade—but I never woke up sweating and gasping for fresh air. Another time I slept under a Twin Sisters tarp at Camp Muir up on Mt. Rainier. It was pretty windy and a little cold. If it hadn’t been for a little altitude sickness and forgetting to put snow on the bottom of the sides to block the wind, I would have slept pretty well. 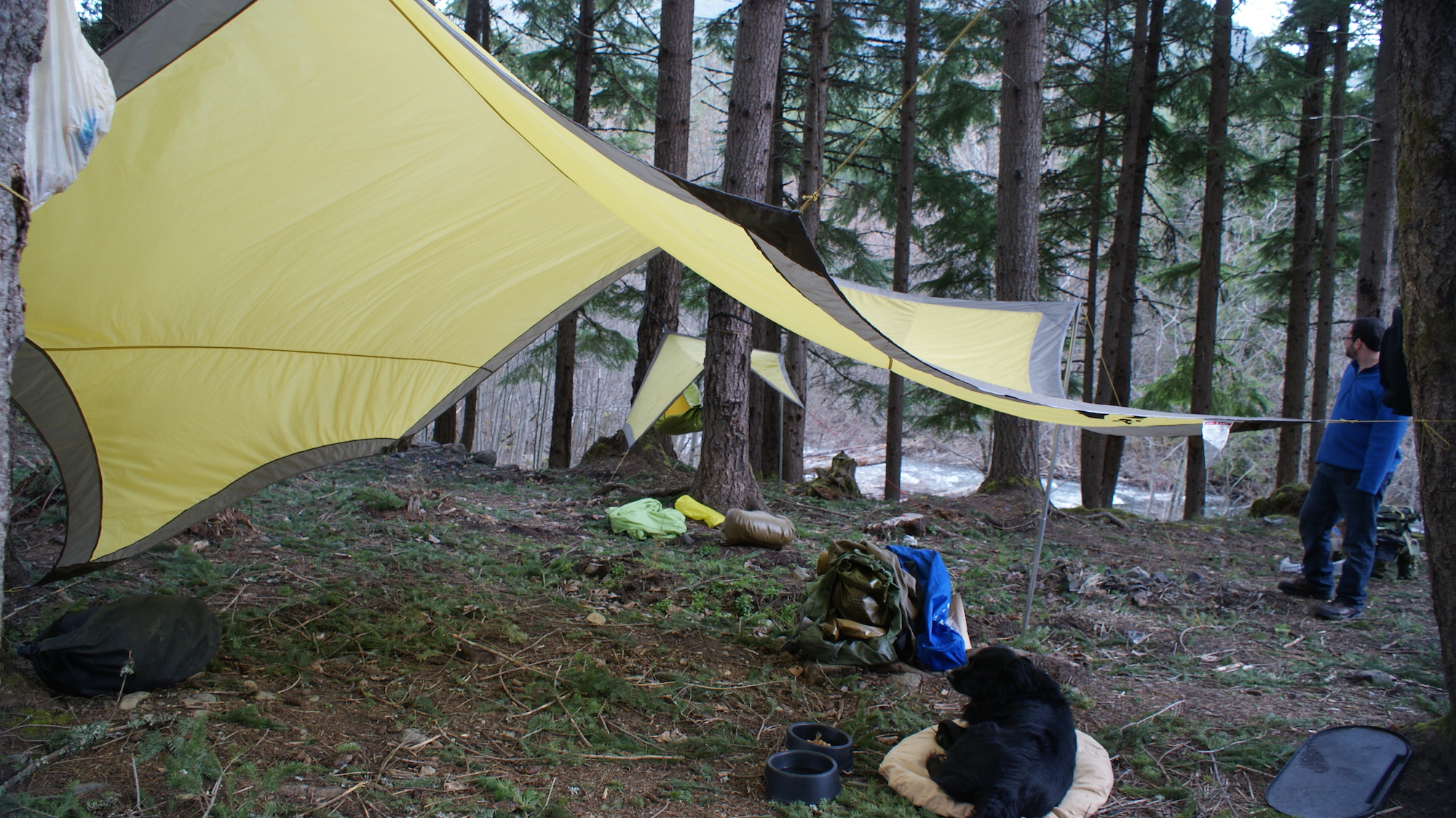 The Twing is a backpacking favorite of mine. Super lightweight, small packed size, and it uses trekking poles (or sticks if you want). It’s only 1lb 4oz but is a decent size for 2 people. My friend Brian (about 6 ½ foot tall) and I took one on a hike up the Hoh River in the rainforest on Washington’s Olympic Peninsula. It was so nice to wake up looking over that beautiful river in the middle of the rainforest—without leaving my cozy bed.

Earl once spent an entire summer living out of an MSR tarp by a pond near his house—just to live outside. He’s mastered the craft of margarita blending at the top of mountains and can build a fire in any weather, including in the snow at -14 F. In 1999, Earl joined MSR as a mechanical engineer for the Marathon Ceramics project. While he doesn’t design our tents, he loves testing them, and spent a week testing the DragonFly tent solo on Mt. Evens. He’s hiked the 75-mile Stevens Pass to Snoqualmie Pass section of the PCT in Washington, and loves to deep-sea fish when he can.