Photos and story by Leif Whittaker

The view from the barren promontory above Namche Bazaar in Nepal looked out on a windswept hunk of the Himalaya where the sunrise struck, bathing the world’s highest mountain in flattering gold light. Dad and Mom stood next to me, their breath white in the frigid morning. The alpine air was redolent with juniper. We talked about climbing, a favorite subject of the guides, Sherpa, and photographers who clustered around us. I listened intently to Dad’s stories about his ascent of Mount Everest in 1963 and Mom’s stories about the 1978 K2 expedition. Though they spoke of daring, superhuman feats—like descending from 29,035 feet half blind and without bottled oxygen—I heard a conspicuous tone of humility in their voices, as if they acknowledged how lucky they had been. It was a tone that is far too rare in today’s extreme vernacular, one that declared a genuine reverence for the landscape and a visceral understanding of the fact that climbing has almost nothing to do with conquering mountains.

Over the course of the next week, as we hiked the ancient trail to Base Camp, Dad and Mom continued to regale us with stories from a bygone era of adventure. We had come to the Khumbu Valley to celebrate the 50th anniversary of the first American ascent and much of the conversation naturally revolved around one question: How has Mount Everest changed? Having reached the summit myself in 2010, I had seen firsthand the crowds, fixed lines, and high-paying clientele that typified the modern experience, but I believed the mountain still offered valuable challenges. Indeed, I came back for this second expedition because I suspected the mountain had much more to teach me.

On the twelfth day of the trek, Dad fell victim to a severe gastrointestinal illness that forced him to rush behind boulders or into nearby outhouses every hour. At 83, Dad retained the same determination and indefatigable drive that had propelled him through 70mph winds and negative-30 degree temperatures on May 1st, 1963; he refused to stop or turn around, no matter how much Mom and I begged. Halfway up an indistinct hill, at about 17,000 feet, I could literally hear his arrhythmic heartbeat pounding in his chest and I stepped in front of him, blocking the way forward. Noticing the fear in my eyes, Dad said, “Let me get to the top of this hill. Then we’ll see.”

To a logical mind, it was a pointless endeavor. The hill was not special in any way; it was one of an endless number of identical hills that rolled outward like ripples in all directions. Yet, to Dad, getting to the top was important. Not because it was higher or more difficult than other hills, but because, put simply, it was as far as he could possibly walk without killing himself.

The next morning was silent and the sky was the type of dark blue that can only be seen at high altitude. In the minutes before we went our separate ways—Dad and Mom catching a helicopter to Kathmandu, me continuing on to my second summit of Mount Everest—we stood together, taking in the desolate beauty of the Himalaya. I struggled to find words that might express the true depth of my gratitude. I wanted to tell them I understood that mountaineering was an extraordinary privilege for which I would be forever grateful. But while we waited glumly for the helicopter to arrive, all I could think to say was, “At least you’ll get to take a hot shower.”

May 26th was a brilliant day at the top of the world. Makalu and Lhotse jutted into the ringing horizon to the southeast; the brown expanse of the Tibetan plateau stretched to the north; and the V-shaped valleys of Nepal meandered away to the southwest. I could see every stark detail of the Himalaya, but I did not feel expansive or sublime. Instead, I felt the same as Dad did when he planted the Stars and Stripes on the summit 50 years earlier: “Like a frail human being.” I peered down at the brittle ice and unforgiving rock that I had just climbed up, and I knew exactly how lucky I was to be alive. 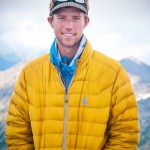 Leif Whittaker seeks adventure in all aspects of life. He is a young and accomplished mountaineer who has twice climbed to the summit of Mount Everest. He is also a talented writer and public speaker who inspires others to enjoy the outdoors. His love of skiing, rock climbing, sailing, kayaking, rafting, hiking, photography, and food has led him to explore many remote corners of the planet. He is currently working on a book about his experiences on Mount Everest.