Some people love snow flukes: skiers who want a low-profile anchoring device that fits in their packs; mountaineers traveling in softer or uniform snow conditions; rescue guides or climbing pairs who may need to anchor with only one free hand. As snow protection gear, the fluke definitely has its place, and it’s been part of MSR’s history almost from the beginning.

It goes back to 1969, soon after Larry Penberthy founded Mountain Safety Research, Inc. to support the work he began with The Mountaineers of independently reviewing climbing equipment and making gear that was safer and easier to use. Penberthy published his findings in the Mountain Safety Research newsletter, which sold third-party and MSR brand gear. The first two pieces of gear featured in the newsletter were Edmont cold-weather gloves and MSR first-generation snow flukes.

Through the newsletter archive, you can track the evolution of the fluke’s design and see MSR’s efforts to educate customers in its use under Larry’s three-fold focus on research, safety education and manufacturing.

Appearing in the November 1969 newsletter, MSR’s first generation snow flukes were made of high-tensile aluminum plates bent at shallow angles for placement stability and strength. They featured steel runner cables to help stabilize the angle of the fluke so it would dig or “sail” deeper into the snow when heavy load was applied to the attached climbing rope. An included diagram helped educate readers on how to properly anchor the fluke.

Initially, snow flukes were offered in three different sizes: 4 x 7, 5 x 10 and 8 x 12 inches, weighing 7, 12 and 24 ounces respectively. Fluke weights dropped regularly as MSR improved and streamlined the design over the next decade.

1970-1980: Design updates and an emphasis on snow safety education

One snow fluke design change came early in February 1970, with the addition of four holes—two near the top and two near the bottom—so you could lash the fluke to an ice axe for use as an emergency shovel. While the change may have been subtle, the potential usefulness to a mountaineer in the field could be great, as the newsletter suggests in a customer shout-out: “Bill Leavens, Seattle, has suggested leaving the fluke on the axe while traveling, for quick driving into the snow for belay.”

In April 1973, the newsletter reports on another design change that never made it out of R&D: “We tested having a pounding bar on the top of the fluke but found it impeded the flight of the fluke into the snow, thus increasing the chance of pullout.”

Throughout the Mountain Safety Research newsletter, you’ll find an emphasis not only on such gear testing but also on safety education, such as how to anchor a fluke when snow crust is an issue.

1983: Snow pickets are in; snow flukes are (temporarily) out 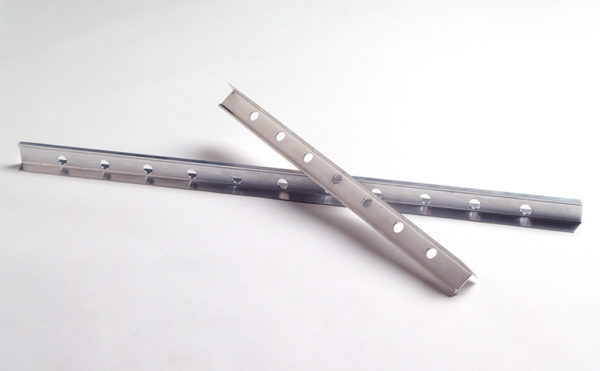 MSR stopped making the snow fluke in the early 1980s, when people started fashioning their own deadman anchors, and when snow pickets were becoming the preferred form of snow protection. A snow picket, which could function as a deadman if buried horizontally or penetrate varying layers of snow if hammered vertically, offered versatile anchoring and reliable performance in diverse snow conditions, and they were affordable. MSR had been making high-tensile aluminum snow pickets since 1970, but it was the MSR Coyote™ Snow Picket, introduced in 1983 and updated in 1987, that became a true classic and customers’ go-to anchor.

With its ingenious T-shaped cross-section, the new-generation pickets exposed more surface area to the snow for better anchoring, added more heat-treated, aircraft-grade aluminum to areas of high stress for increased strength, and removed material from areas with lower loads for lighter weight. Made 50 percent stiffer, the stakes proved so successful that MSR’s current-generation picket uses a near-identical design.

2010: The MSR Snow Fluke returns, lighter than ever 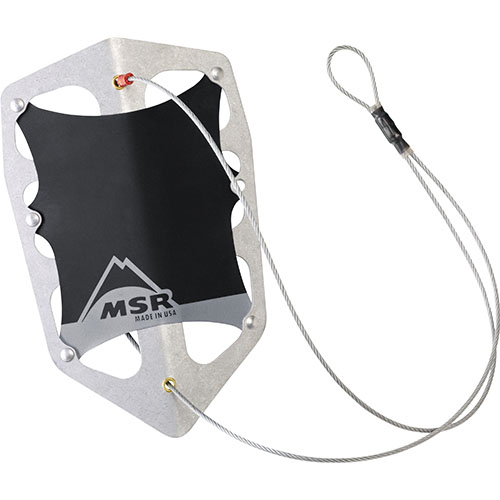 In 2010, MSR decided to bring back the snow fluke to improve on the designs that were currently on the market and to offer mountaineers, skiers and ski patrollers different snow protection options.

“Snow flukes were a really good anchor from the beginning because they were self-diving,” says former MSR Product Manager Owen Mesdag. “The more weight you put on them, the deeper they go in and the stronger the hold. You don’t have to go through all the effort of digging them in as you would a picket.” 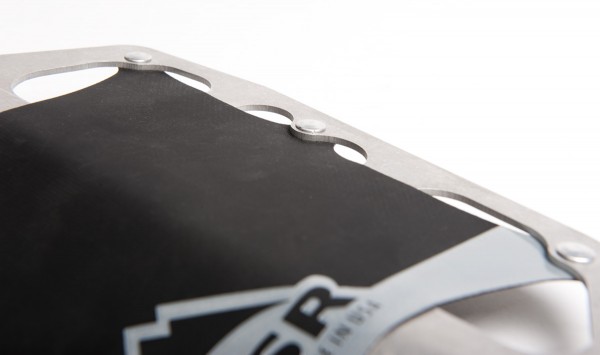 As Mesdag explains, when MSR brought back the fluke, “they did it the MSR way,” which meant working with materials and manufacturing to reduce weight without compromising strength or functionality, and meeting UIAA performance standards. Made on-site, MSR’s updated fluke combines 7000-series aluminum with polyurethane deck material. At 7 oz (195g) for the small 5.25 x 8.25-inch size and 9 oz (250g) for the large 7 x 10.75-inch size, the respective snow flukes are the lightest-weight version available—lighter than any other competitor’s fluke of the same size. “And it’s cool looking,” adds Mesdag.

This same year, MSR improved our popular Snow Picket, beveling one end of it to create a point to more easily penetrate harder pack snow, and adding a dedicated hammer strike plate to the head of the picket. Together, the redesigned MSR Snow Picket and MSR Snow Fluke offer mountaineers, skiers, professionals and enthusiasts the snow protection tools they can rely on when it counts. 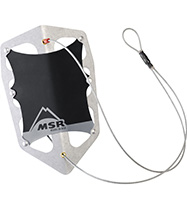 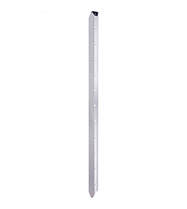